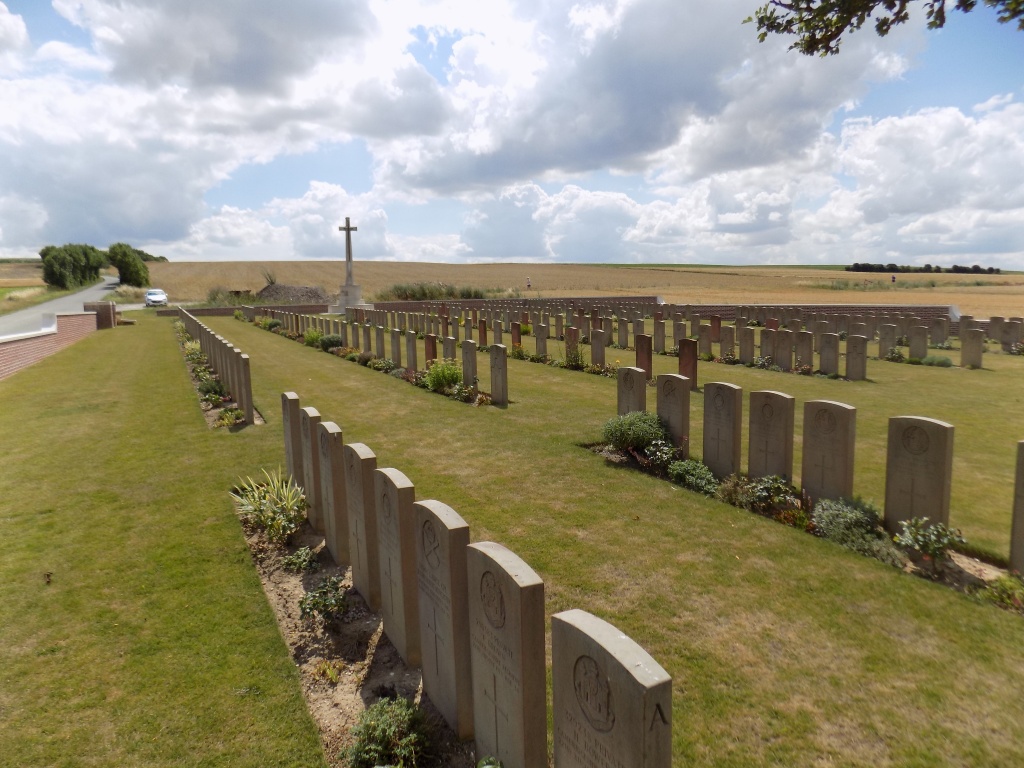 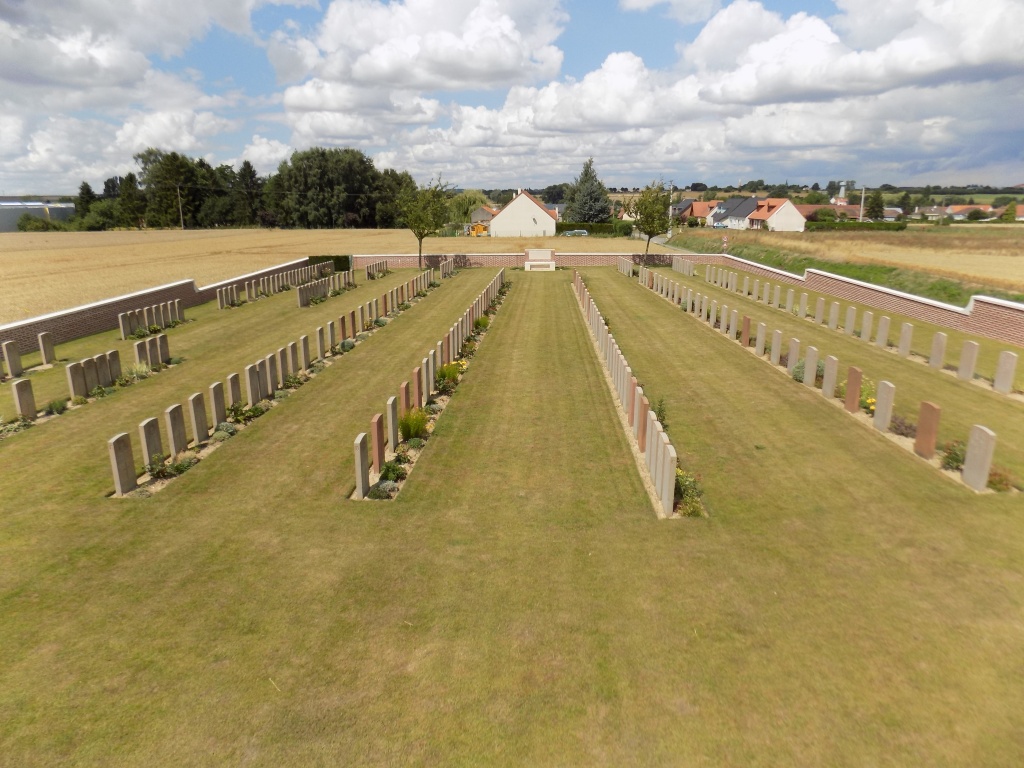 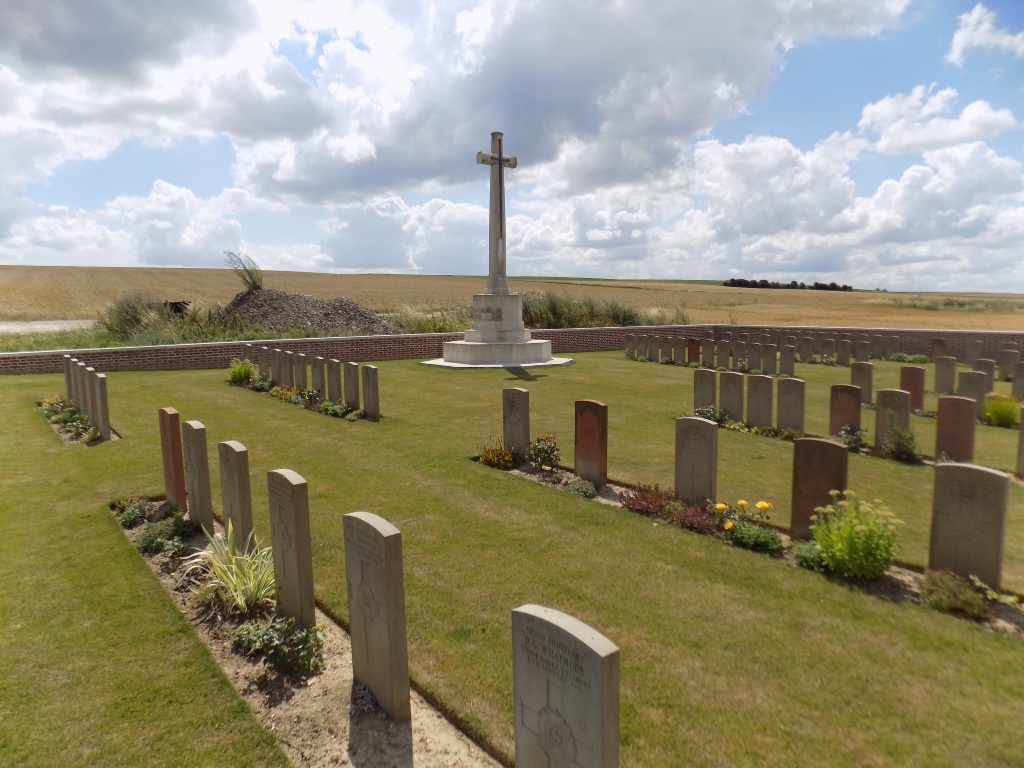 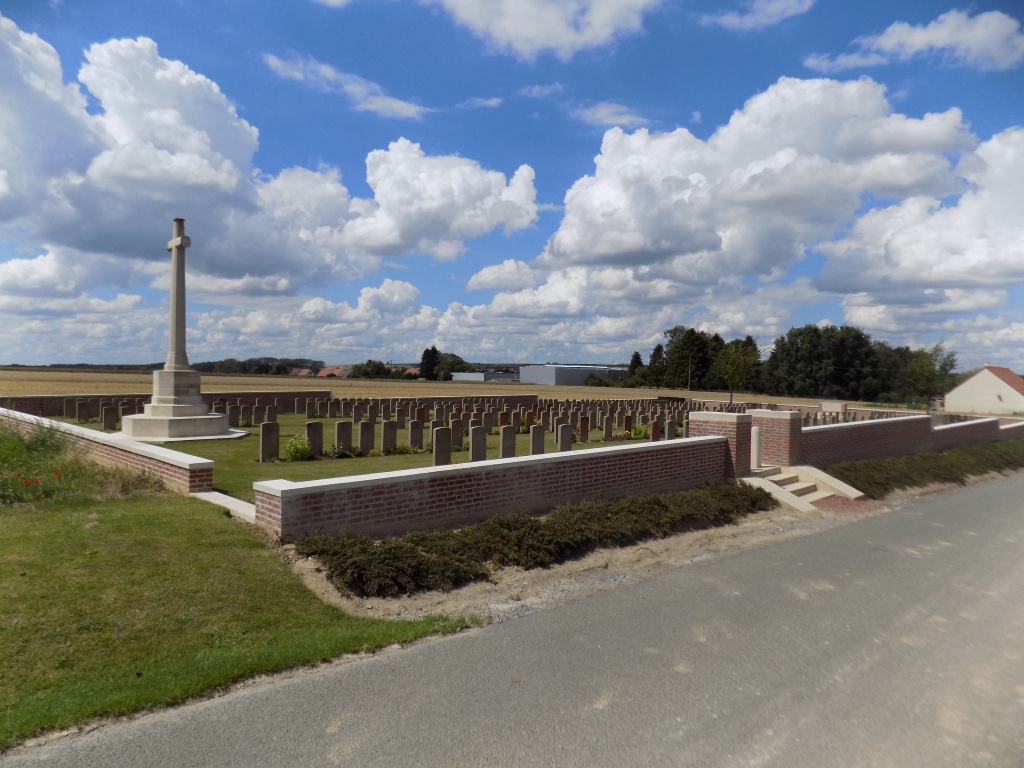 Meaulte is a village in the Department of the Somme, immediately south of Albert. The Military Cemetery is south of the village on the west side of the road to Etinehem.

This cemetery contains graves in which more than one casualty is buried and on which more than one headstone is erected. As each of the graves has a single grave number, it follows that the numbering of the grave will in some cases not correspond with the number of the headstone as determined by counting from the beginning of the row. Visitors should therefore examine the whole row if they do not at once find the grave in which they are interested. Wheelchair access to the cemetery is possible, but may be by alternative entrance. For further information regarding wheelchair access, please contact our Enquiries Section on 01628 507200.

Meaulte was held by Commonwealth forces (and inhabited by three quarters of its civilian population) from 1915 to 26 March 1918, when it was evacuated after a rearguard fight by the 9th (Scottish) Division. It was recaptured by the 12th (Eastern) Division and tanks on 22 August 1918. The military cemetery was begun in December 1915, and used until February 1917. A few further burials were made after the recapture of the village and after the Armistice, graves (mainly of 1918) were brought in from the neighbouring battlefields and other burial grounds, including:- SANDPIT CEMETERY, MEAULTE, on the Albert-Bray road, a little East of the village. The Sandpit was a camp in January 1917, and it was retaken by the 7th Royal Sussex on the 22nd August 1918. The cemetery was made by the 12th Division. It contained the graves of 93 soldiers from the United Kingdom and one Canadian airman who fell on the 22nd - 29th August 1918. MEAULTE TRIANGLE CEMETERY, between a road junction and a light railway crossing on the Morlancourt road. It was made by the III Corps Heavy Artillery and the 12th Division, and it contained the graves of 36 soldiers from the United Kingdom who fell on the 23rd - 25th August 1918. The cemetery also contains an unknown soldier from MEAULTE CHURCHYARD, brought in 1936. Meaulte Military Cemetery contains 312 burials and commemorations of the First World War. 21 of the burials are unidentified but special memorials (three of which are in Row E) are erected to eleven casualties believed to be buried among them. The cemetery was designed by Sir Edwin Lutyens.