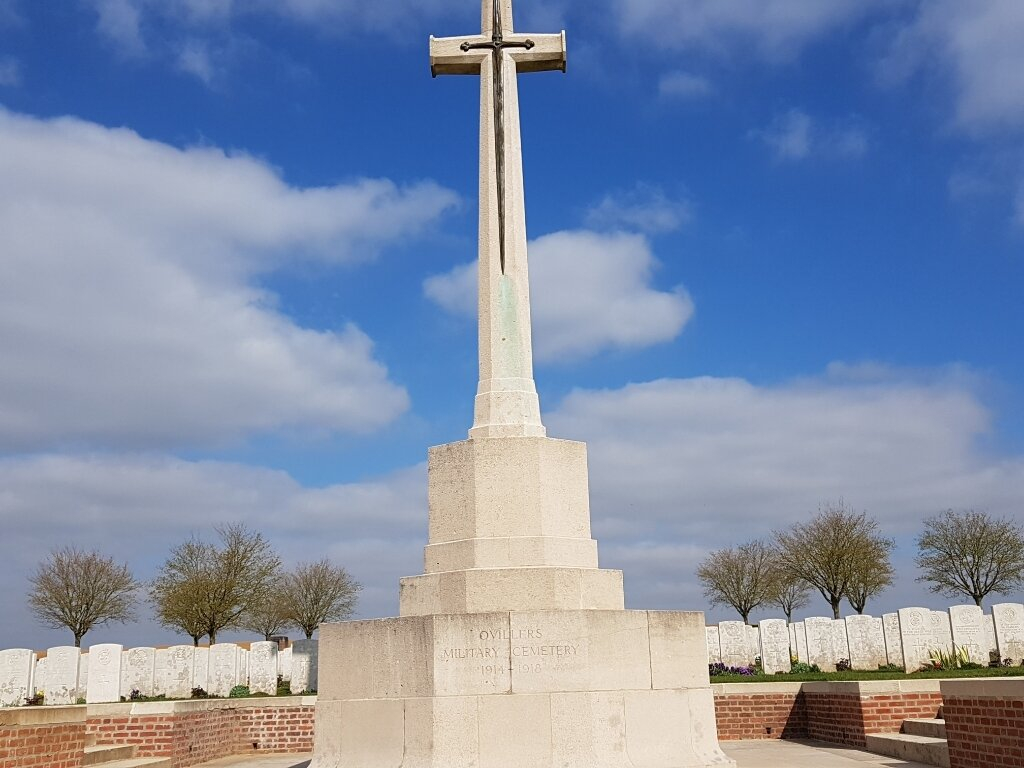 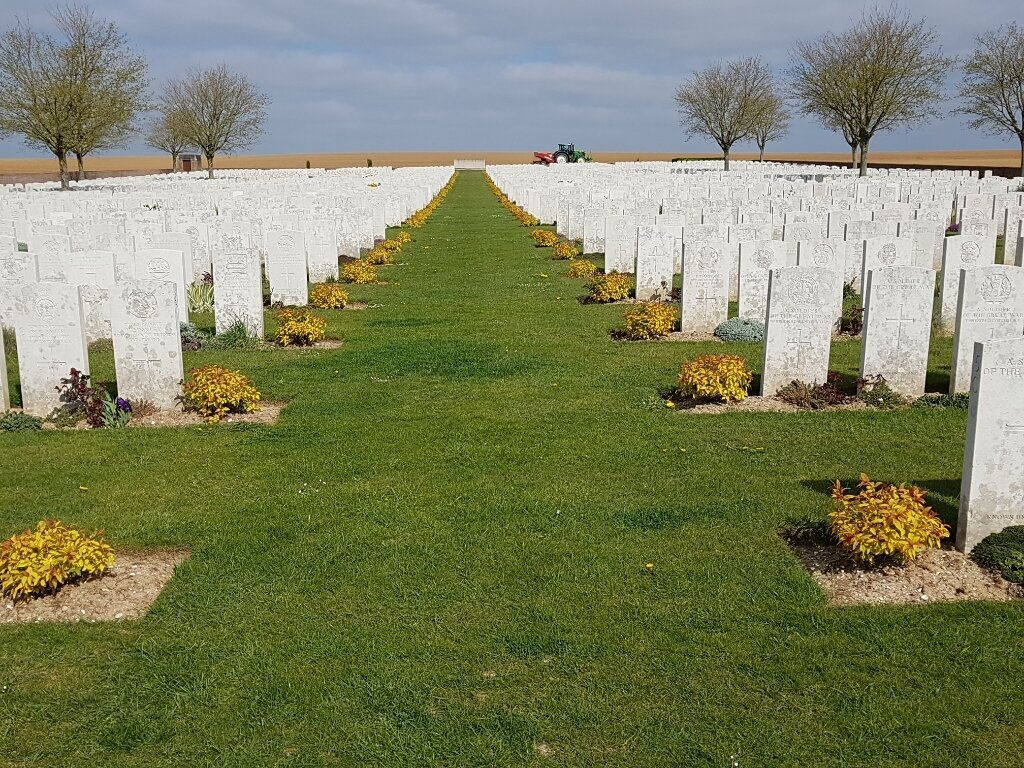 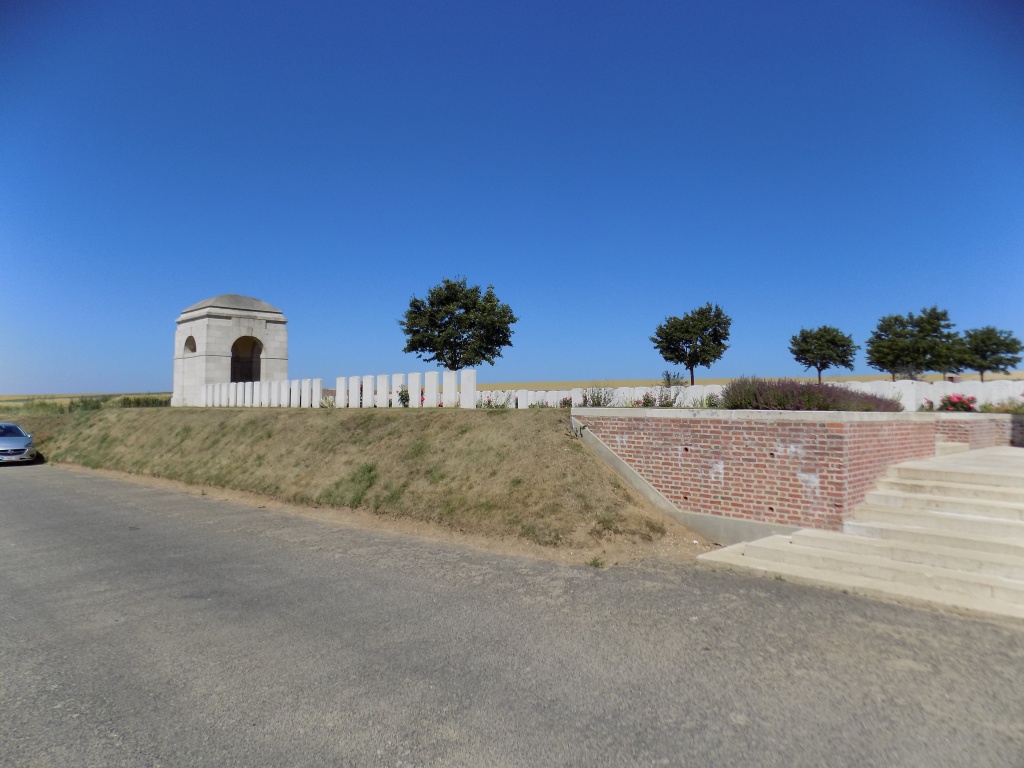 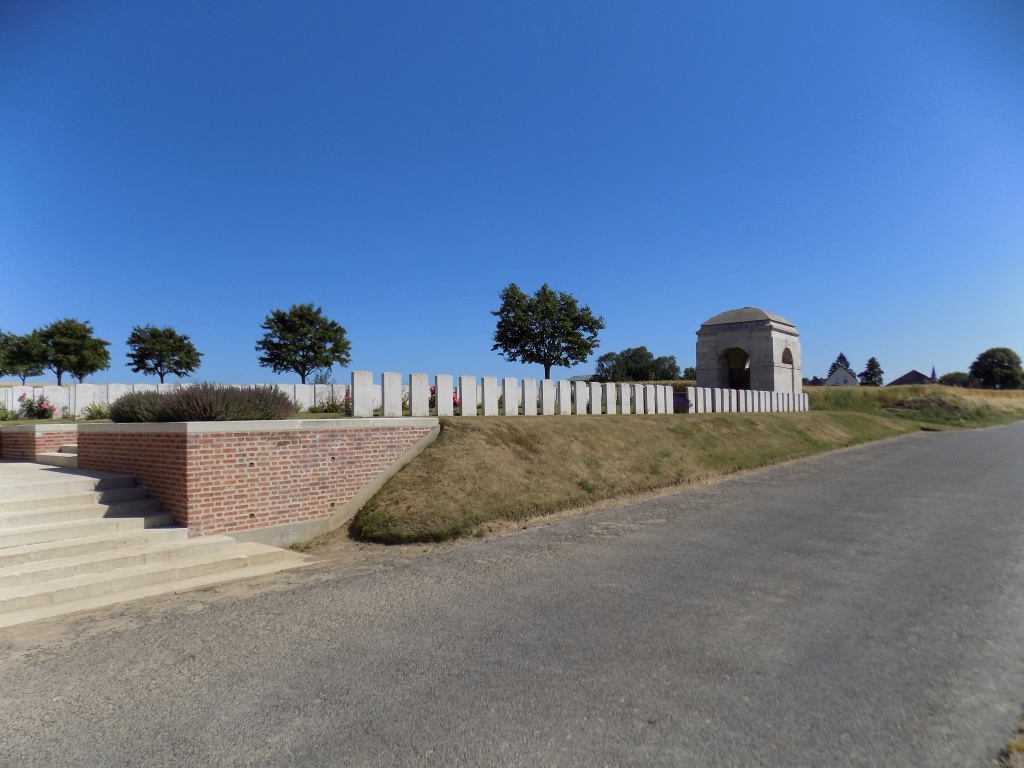 Ovillers is a village about 5 kilometres north-east of the town of Albert off the D929 road to Bapaume. The Military Cemetery is approximately 500 metres west of the village on the D20 road to Aveluy. The Cemetery is signposted in the village.

On 1 July 1916, the first day of the Battle of the Somme, the 8th Division attacked Ovillers and the 34th Division La Boisselle. The villages were not captured, but ground was won between them and to the south of La Boisselle. On 4 July, the 19th (Western) Division cleared La Boisselle and on 7 July the 12th (Eastern) and 25th Divisions gained part of Ovillers, the village being cleared by the 48th (South Midland) Division on 17 July. The two villages were lost during the German advance in March 1918, but they were retaken on the following 24 August by the 38th (Welsh) Division. Ovillers Military Cemetery was begun before the capture of Ovillers, as a battle cemetery behind a dressing station. It was used until March 1917, by which time it contained 143 graves, about half the present Plot I. The cemetery was increased after the Armistice when Commonwealth and French graves where brought in, mainly from the battlefields of Pozieres, Ovillers, La Boisselle and Contalmaison, and from the following two cemeteries:- MASH VALLEY CEMETERY, OVILLERS-LA BOISSELLE, was about 200 metres North of Ovillers Military Cemetery. It was named from one of two valleys (Mash and Sausage) which run from South-West to North-East on either side of La Boisselle. It contained the graves of 76 soldiers from the United Kingdom who fell in July-September 1916. RED DRAGON CEMETERY, OVILLERS-LA BOISSELLE, was midway between Ovillers and La Boisselle. It was made by the 16th and 17th Royal Welch Fusiliers, and named from their badge. It contained the graves of 25 soldiers who fell in August 1918, all of whom belonged to the 38th (Welsh) Division, and all but three to the Royal Welch Fusiliers. There are now 3,440 Commonwealth servicemen of the First World War buried or commemorated in the cemetery. 2,480 of the burials are unidentified but there are special memorials to 24 casualties believed to be buried among them. Other special memorials record the names of 35 casualties, buried in Mash Valley Cemetery, whose graves were destroyed in later fighting. The cemetery also contains 120 French war graves. The cemetery was designed by Sir Herbert Baker.