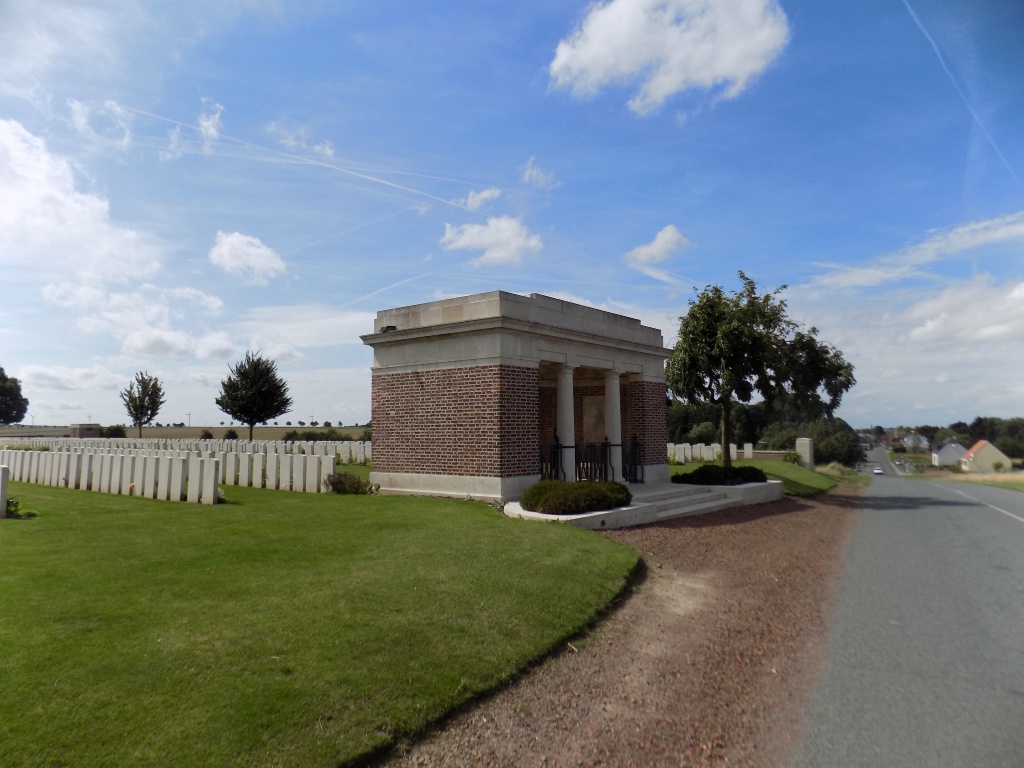 Fins is a village on the road between Cambrai and Peronne. The British Cemetery is a little south-east of the village in the district of Sorel Le Grand on the right hand side of the road to Heudicourt.

Fins and Sorel were occupied at the beginning of April 1917, in the German Retreat to the Hindenburg Line. They were lost on the 23 March 1918, after a stubborn defence of Sorel by the 6th K.O.S.B. and the staff of the South African Brigade; and they were regained in the following September. The first British burials at Fins were carried out in the Churchyard and the Churchyard Extension, and the New British Cemetery was not begun until July 1917. It was used by fighting units (especially the 40th, 61st (South Midland) and 9th (Scottish) Divisions) and Field Ambulances until March, 1918, when it comprised about 590 graves in Plots I to IV. It was then used by the Germans, who added 255 burials, including 26 British, in Plots IV, V, and VI. In September and October 1918, about 73 British soldiers were buried by the 33rd and other Divisions, partly in Plots I and II, but mainly in Plots V and VI. Lastly, Plots VII and VIII were made, and other Plots completed, by the concentration of 591 graves after Armistice from the surrounding battlefields and from other smaller cemeteries, including:- EQUANCOURT CHURCHYARD, where three soldiers from the United Kingdom were buried in 1917 and 1918. FINS CHURCHYARD, in which nine soldiers from the United Kingdom were buried in April, 1917. FINS CHURCHYARD EXTENSION, which was on the North side of the churchyard, within the enclosure of a house. It contained the graves of 121 soldiers from the United Kingdom and one from Canada, who fell in April July 1917, and one German soldier who fell in March 1918. SOREL-LE-GRAND GERMAN CEMETERY, on the West side of the village, opposite the Communal Cemetery. Here were buried, some by the enemy and some by their comrades, 17 soldiers from the United Kingdom who fell in 1916-1918. There are now 1289, First World War casualties commemorated in this site. Of these 208 are unidentified, and special memorials are erected to nine soldiers from the United Kingdom who are believed to be buried among them. Another special memorial records the name of a soldier from the United Kingdom, buried in Fins Churchyard Extension, whose grave could not be found on concentration. Nine graves in Plot VIII, Row E, identified as a whole but not individually, are marked by headstones bearing the words: "Buried near this spot." There are also 276 German burials here, 89 being unidentified. This cemetery was designed by Sir Herbert Baker.