Due to roadworks starting on 23 July from Embarkation Pier Cemetery, the 7th Field Ambulance, Hill 60, Lala Baba and Green Hill cemeteries will be closed for visitors for the next four months. Azmak and Hill 10 cemeteries can still be reached through an alternative route. For further information please contact maoffice@cwgc.org. 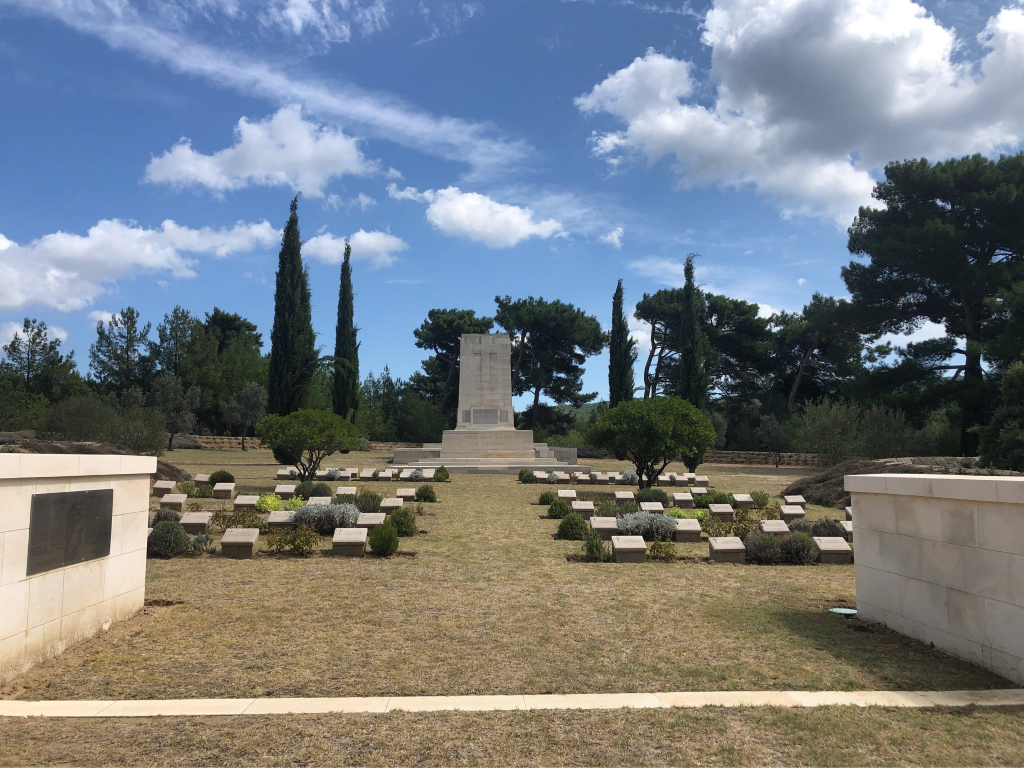 The Anzac and Suvla cemeteries are first signposted from the left hand junction of the Eceabat - Bigali road. From this junction you should travel into the main Anzac area. On leaving the Anzac area and heading towards Suvla, you will find the cemetery at 15.6 kms. at the end of a right hand rough track 600 metres long, which is difficult to negotiate in the wet. Hill 60 is on the 60 metre contour line, at the end of a range, which runs South-Eastward towards Hill 100 between Kaiajik Dere and Asma Dere. Hill 60 Cemetery is reached along a 800 metre track, which requires a 4-wheel drive vehicle during wet weather.

The eight month campaign in Gallipoli was fought by Commonwealth and French forces in an attempt to force Turkey out of the war, to relieve the deadlock of the Western Front in France and Belgium, and to open a supply route to Russia through the Dardanelles and the Black Sea. The Allies landed on the peninsula on 25-26 April 1915; the 29th Division at Cape Helles in the south and the Australian and New Zealand Corps north of Gaba Tepe on the west coast, an area soon known as Anzac. On 6 August, further landings were made at Suvla, just north of Anzac, and the climax of the campaign came in early August when simultaneous assaults were launched on all three fronts. At the beginning of August 1915, Hill 60, which commanded the shore ward communications between the forces at Anzac and Suvla, was in Turkish hands. On 22 August, it was attacked from Anzac by the Canterbury and Otago Mounted Rifles, followed later by the 18th Australian Infantry Battalion and supported on the flanks by other troops. It was partly captured and on 27-29 August, and the captured ground was extended by the 13th, 14th, 15th, 17th and 18th Australian Infantry Battalions, the New Zealand Mounted Rifles, the 5th Connaught Rangers, and the 9th and 10th Australian Light Horse. The position was held until the evacuation in December. HILL 60 CEMETERY lies among the trenches of the actions of Hill 60. It was made after those engagements, and enlarged after the Armistice by the concentration of graves from Norfolk Trench Cemetery and from the battlefield. There are now 788 Commonwealth servicemen of the First World War buried or commemorated in this cemetery. 712 of the burials are unidentified, but special memorials commemorate 34 casualties known or believed to be buried among them. Within the cemetery stands the HILL 60 (NEW ZEALAND) MEMORIAL, one of four memorials erected to commemorate New Zealand soldiers who died on the Gallipoli peninsula and and whose graves are not known. This memorial relates to the actions at Hill 60. It bears more than 180 names.