A total of 453 Indian and 62 Egyptian First World War casualties buried here were commemorated on collective nameless memorials, with their names listed in the printed cemetery register. In 2014 these names were added to the newly built Ramleh 1914-1918 Memorial. 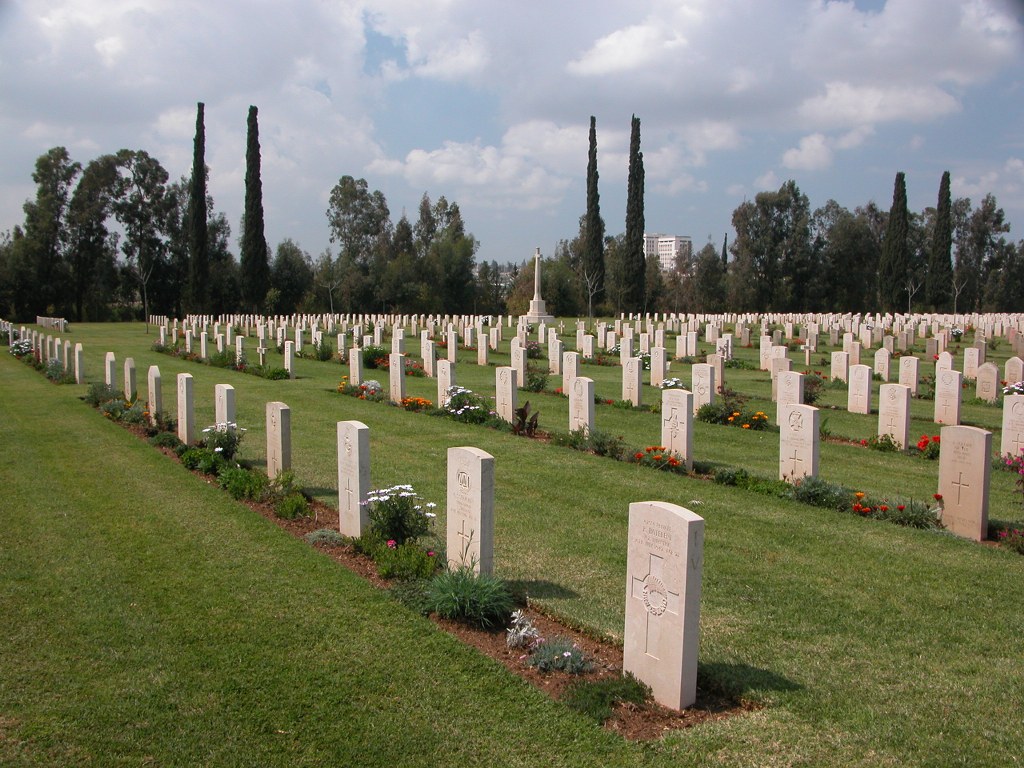 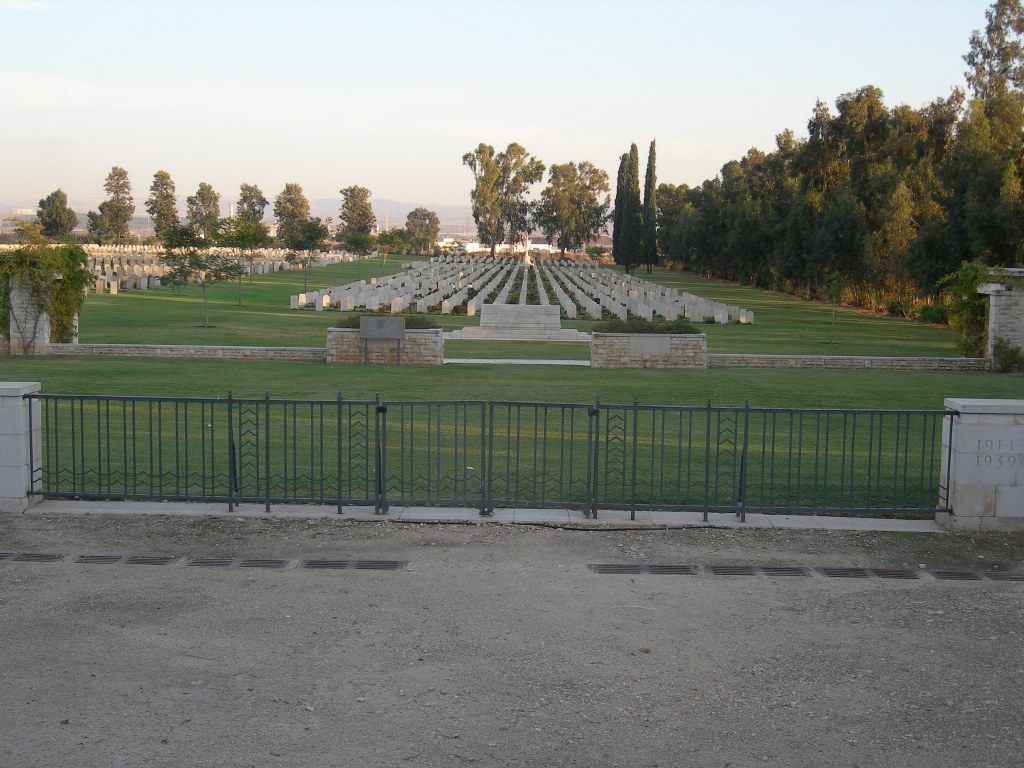 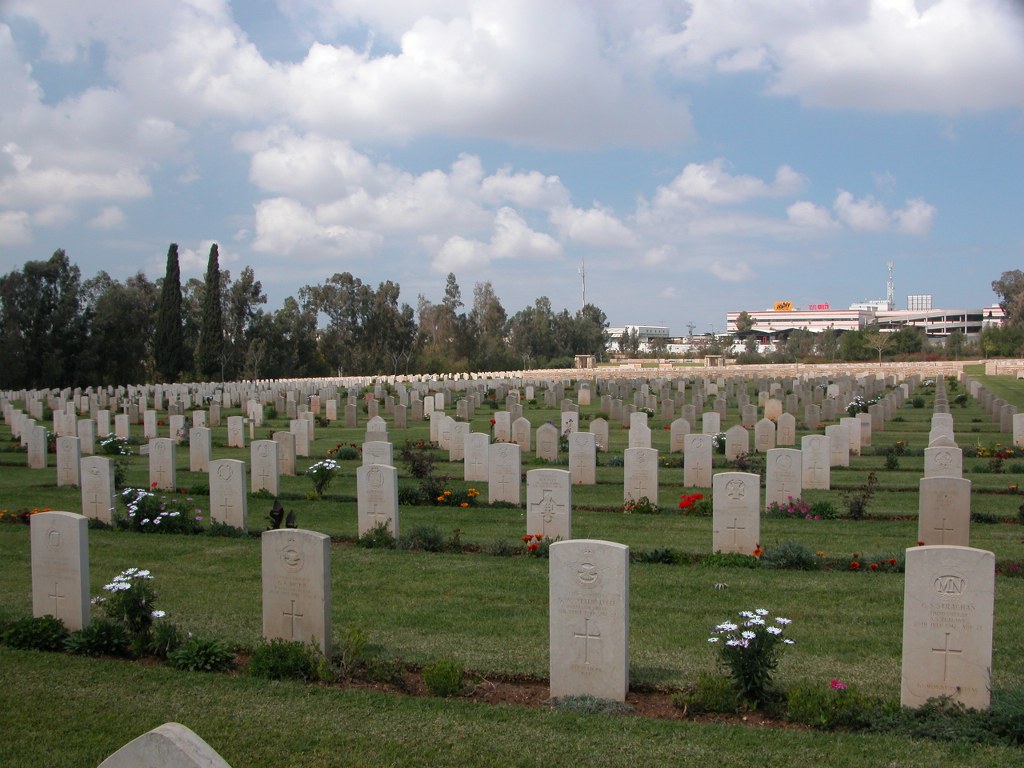 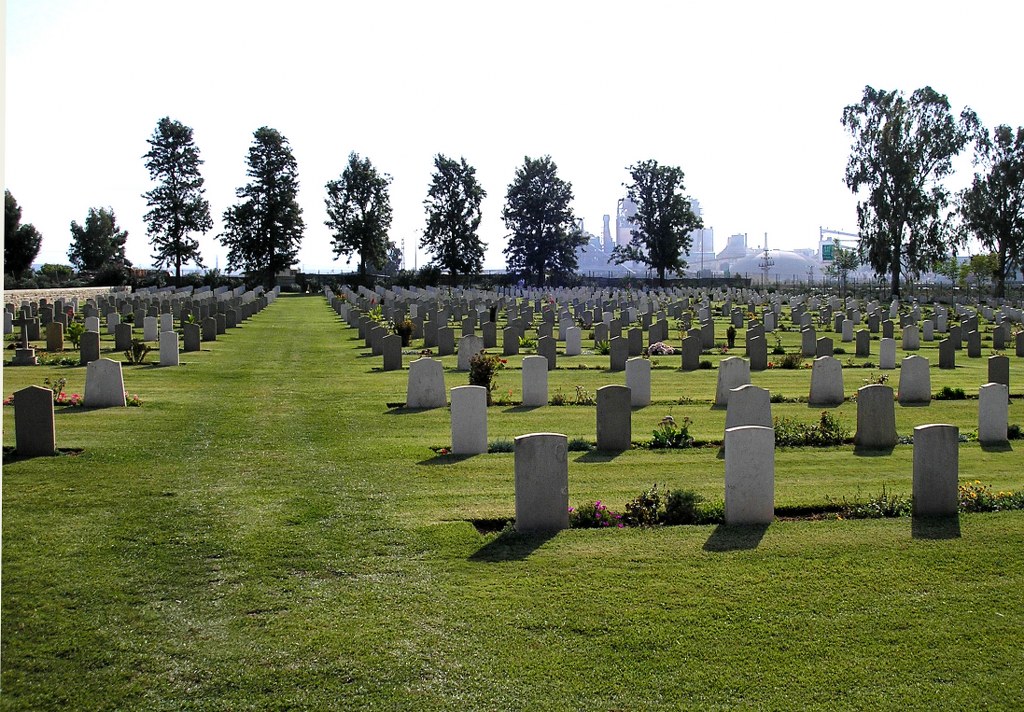 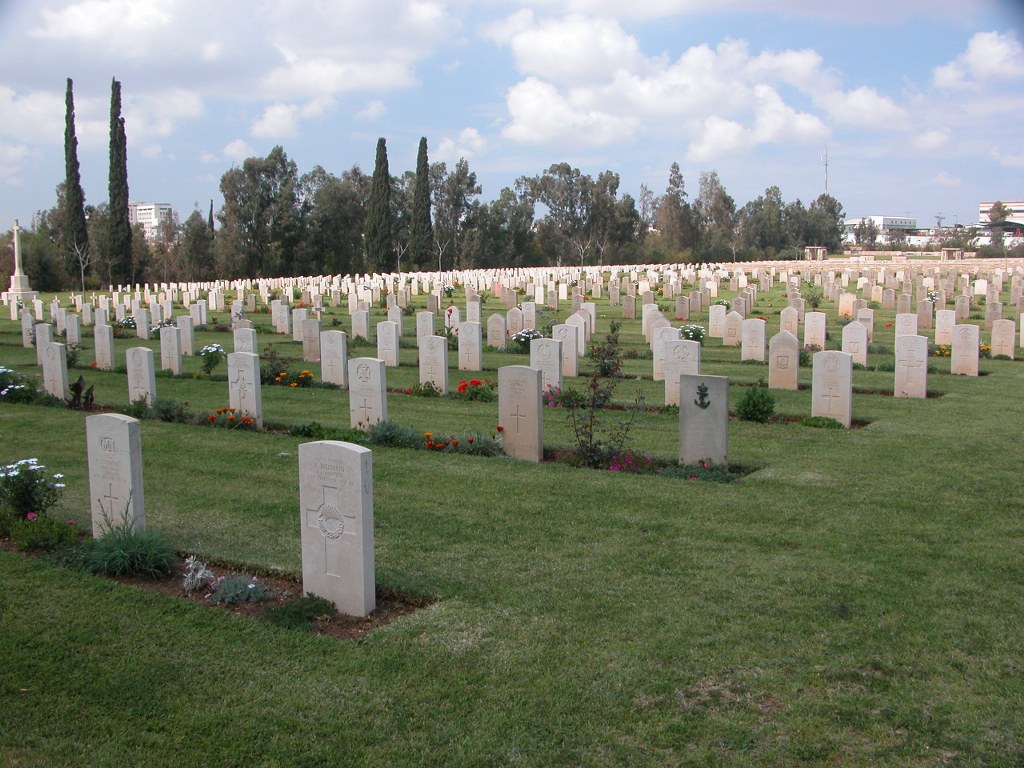 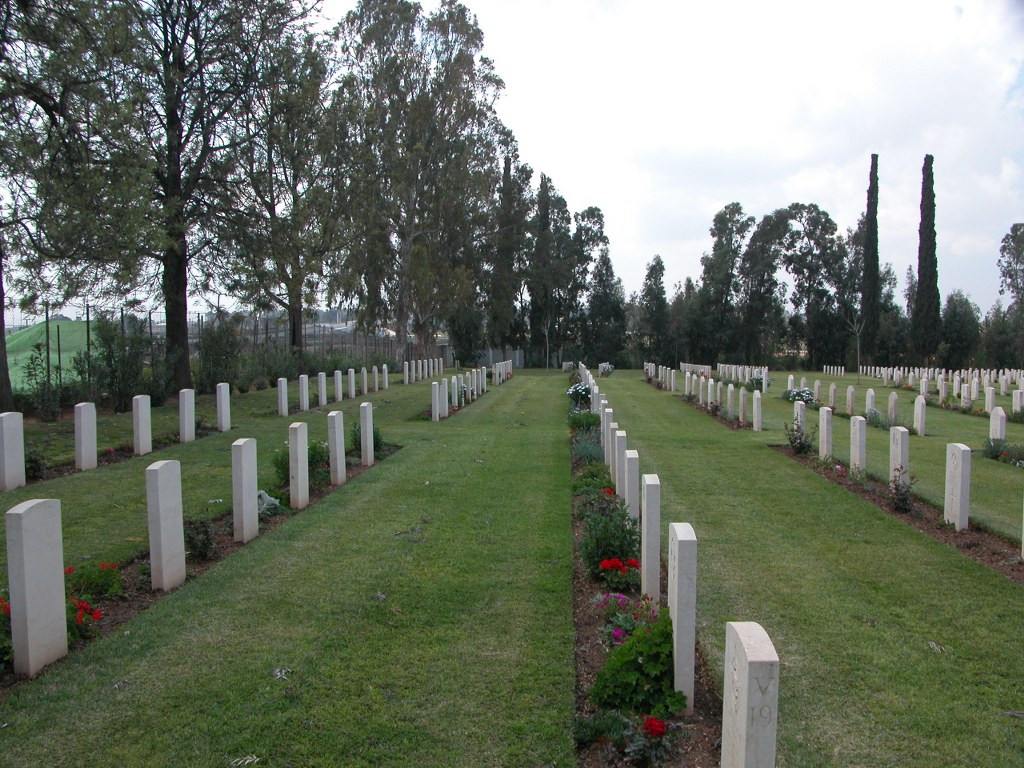 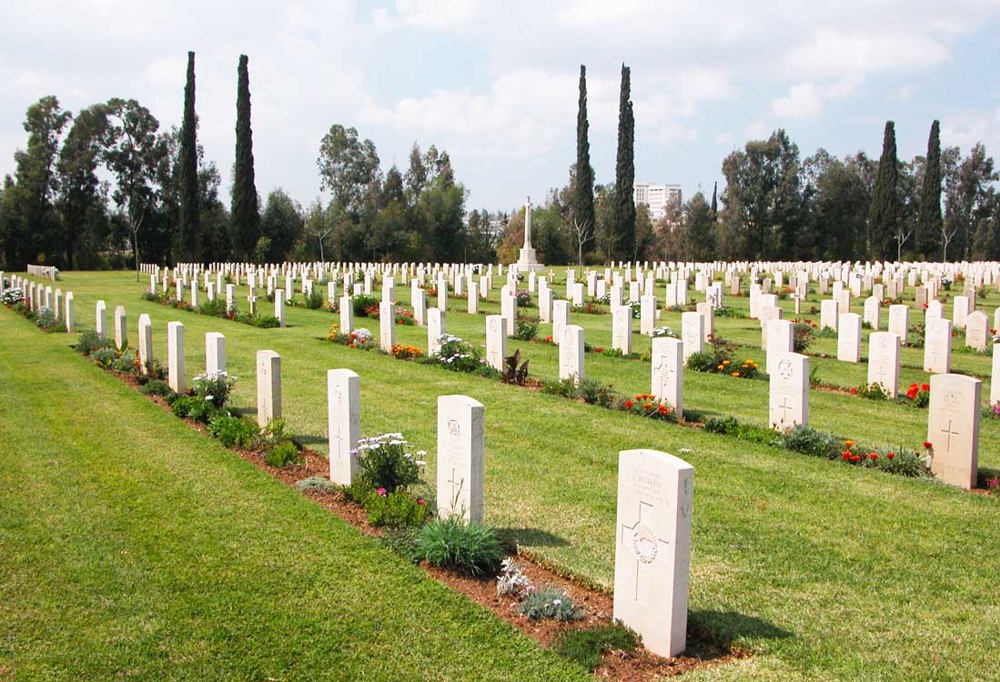 You have to look closely to see where the scars have been repaired. Such is the care and skill used by the Commonwealth War Graves Commission’s (CWGC) teams in Israel, you’d often need to be told where the stonework has been altered.

On the Ramleh 1914-18 Memorial, at the heart of Ramleh War Cemetery, bullet marks from an incident last year by having been carefully restored and filled in. Most visitors would barely notice.

It’s not just the stonework that needs care and attention here. CWGC’s Israeli sites take a beating from the weather.

As with all over the world CWGC tries to use resources responsibly. Solar panels power the latest watering system as it ekes out every last drop to keep the grass as green as possible during the pounding heat of summer.

One by-product of the hot weather is the sweet, ripe fruit that adorns the date palms in our cemeteries here – enough to make any European gardener jealous. 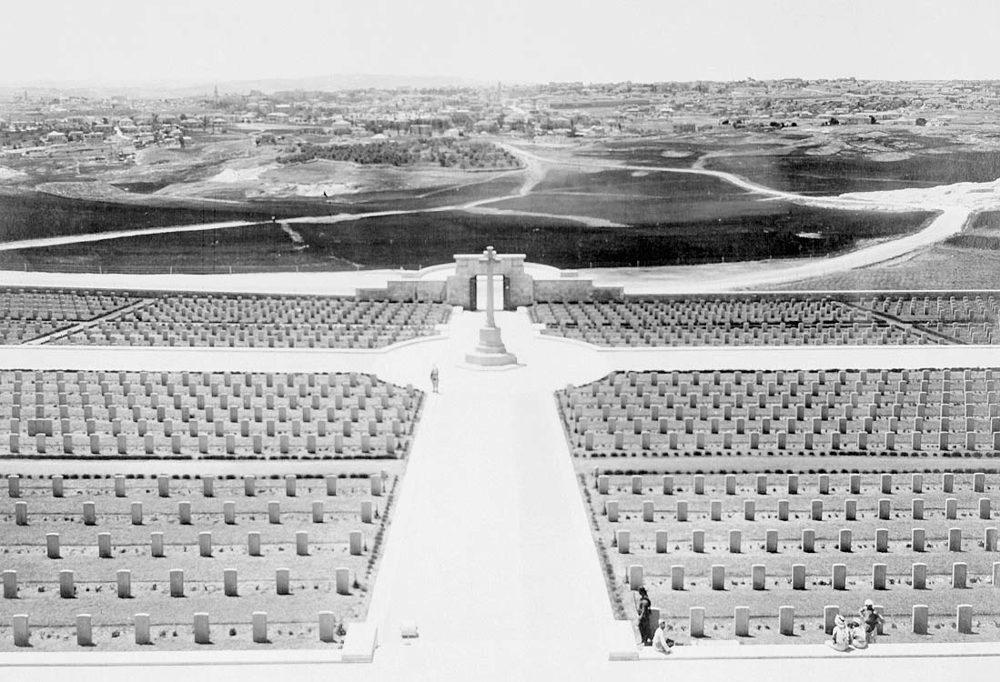 The main sites in Israel were first constructed after the First World War. Jerusalem War Cemetery stood high up on the hills on the outskirts of the city, crowned by the Jerusalem Memorial with its iconic mosaic interior – designed by Robert Anning Bell to honour more than 3,000 missing war dead. 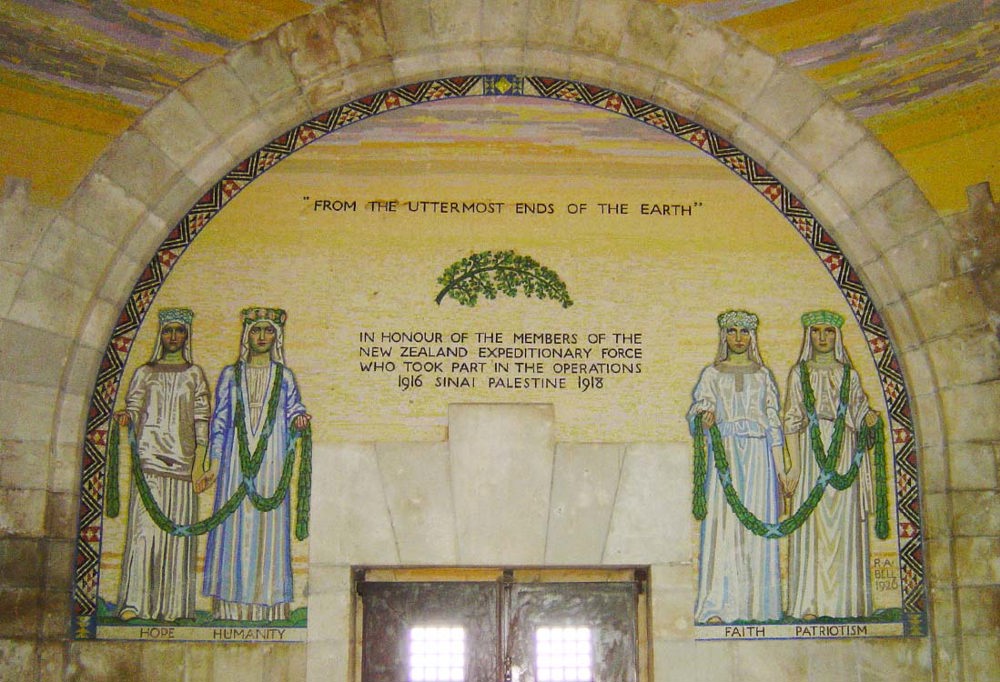 The iconic mosaic interior in the Jerusalem Memorial's chapel.

Today, Jerusalem has grown up around the cemetery. Construction projects have temporarily impacted the main entrance. Overnight, drug users have taken to using the site, giving gardeners an extra clean-up duty in the mornings – all is cleared away quickly enough.

Those who work here are still hugely proud. Nader Habesh, a sculptor by trade, has worked as a mason for the Commission in Israel for more than a decade.

He said: “I feel so proud to work for the Commission. Through our work, we have been able to save many pieces of stonework in Israel and Gaza. It’s an honour to preserve these respectful reminders.” And if Nader’s done what he does best, you would barely know he’d done the work at all. 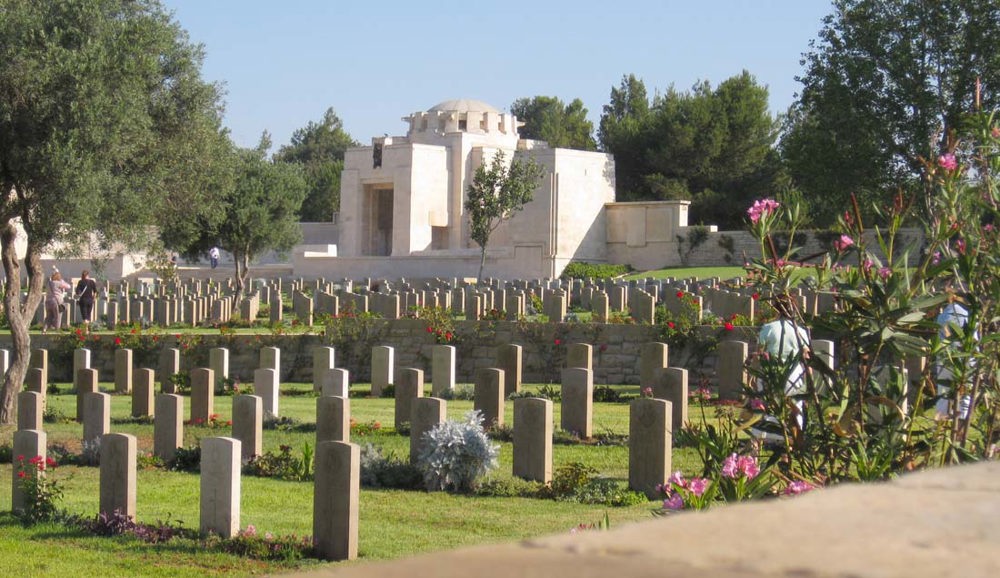 From Tel Aviv, take road number one (Ayalon) south towards Jerusalem. Leave at the exit signposted Lod/Ramleh. This is the exit after Ben Gurion Airport. Proceed along Route 40 for approximately 5 kilometres. At the traffic lights signposted Lod (South) turn right. At the roundabout turn left. The Cemetery entrance is on the left, after 400 metres.

The Cemetery is open from 8.00am to 2.30pm Monday to Friday. Closed weekends and Public Holidays.

PLEASE NOTE : The 1914-1918 section has many grave references identical to the 1939-1945 and Post War sections. Please check you are in the correct part of the cemetery by a simple check of the dates on the headstones. The cemetery layout plan is available online at www.cwgc.org

The cemetery dates from the First World War, when Ramleh (now Ramla) was occupied by the 1st Australian Light Horse Brigade on 1 November 1917. Field Ambulances, and later Casualty Clearing Stations, were posted at Ramleh and Lydda from December 1917 onwards. The cemetery was begun by the medical units, but some graves were brought in later from the battlefields and from Latron, Sarona and Wilhema Military and Indian Cemeteries.

RAMLEH WAR CEMETERY contains 3,300 Commonwealth burials of the First World War, 964 of them unidentified. Second World War burials number 1,168. There are also 892 war graves of other nationalities from both wars, and 525 non-war burials, many from the RAF and garrison stations that were at Ramleh in the inter war years and until the end of the British Mandate in Palestine in 1948.

The RAMLEH 1914-18 MEMORIAL, erected in 1961 to commemorate more than 300 Commonwealth, German and Turkish servicemen of the First World War who lie buried in cemeteries elsewhere in Israel where their graves could no longer be maintained. Only 74 of the casualties are named.

The RAMLEH 1939-45 MEMORIAL, commemorating 28 servicemen and women of various units from the Second World War, and six non-war casualties of the Palestine Police Force, who lie buried in cemeteries elsewhere in Israel where their graves could not be maintained in perpetuity.

The original war cemetery was designed by Sir John J. Burnet, but following the addition of the 1939-45 war graves, the site was extensively remodelled in the 1950s by Alan Stewart, ARIBA.