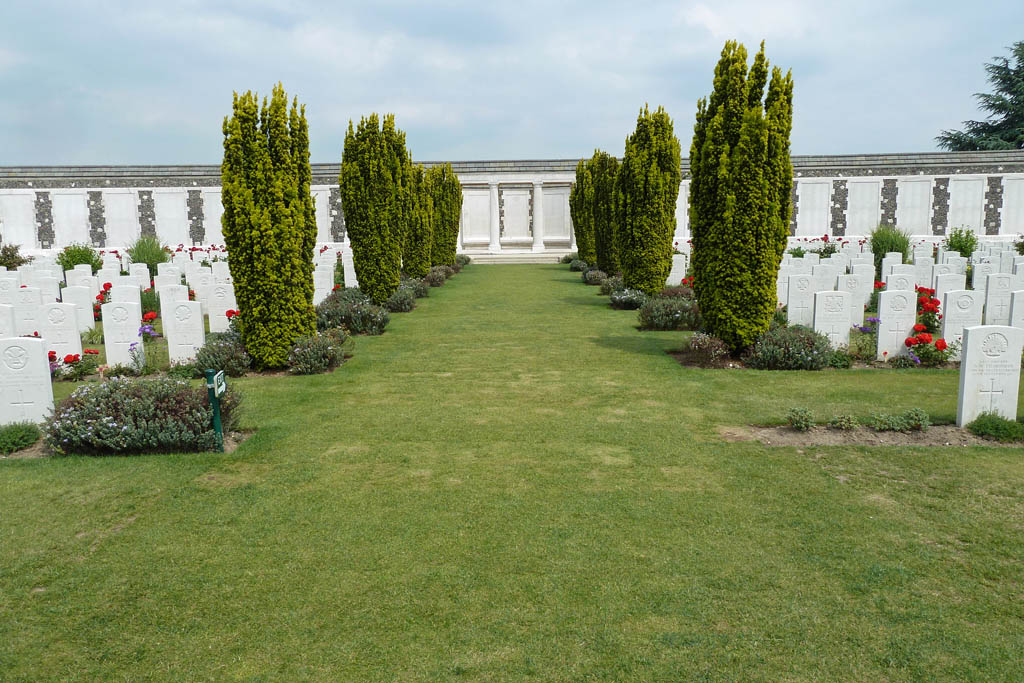 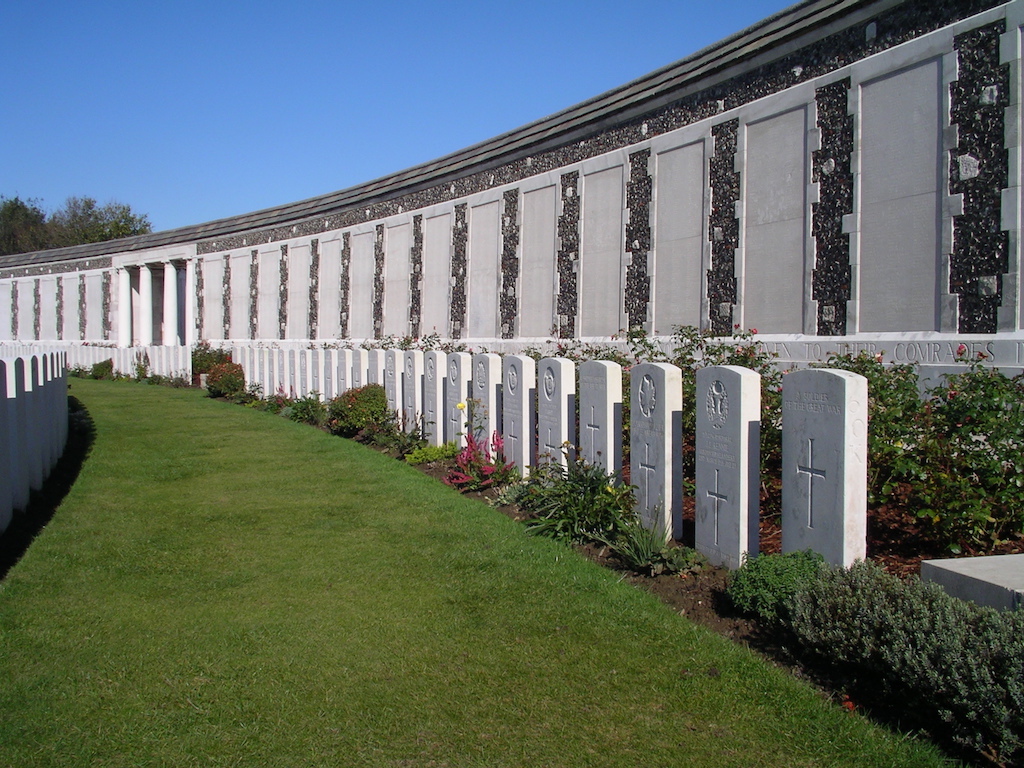 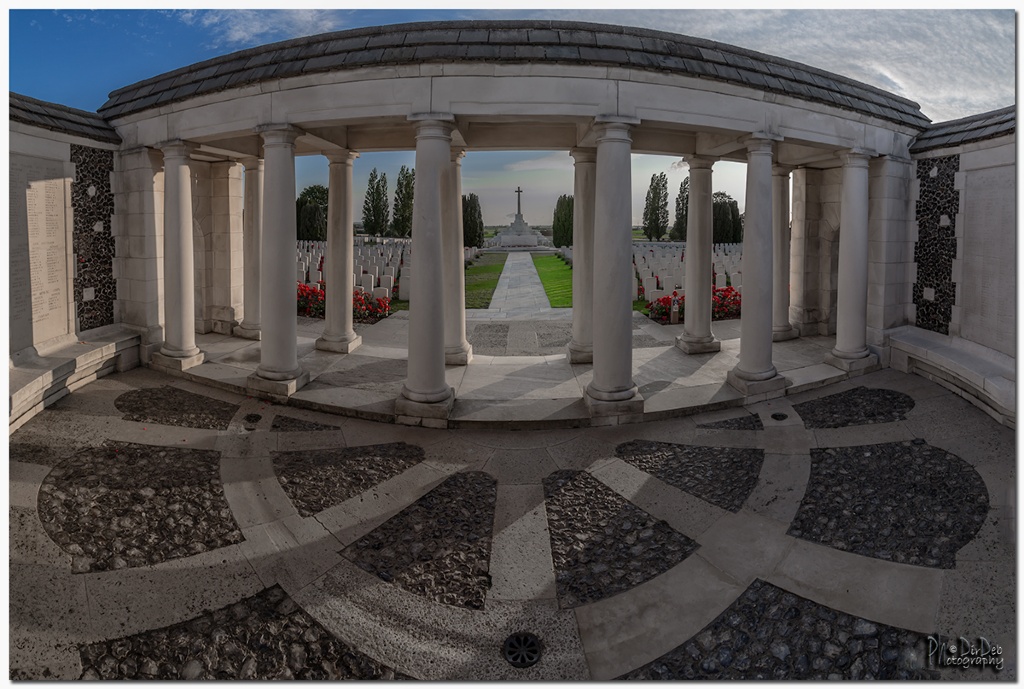 The Tyne Cot Memorial to the Missing forms the north-eastern boundary of Tyne Cot Cemetery, which is located 9 kilometres north east of Ieper town centre, on the Tynecotstraat, a road leading from the Zonnebeekseweg (N332). The names of those from United Kingdom units are inscribed on Panels arranged by Regiment under their respective Ranks. The names of those from New Zealand units are inscribed on panels within the New Zealand Memorial Apse located at the centre of the Memorial.

There are two separate registers for this site - one for the cemetery and one for the memorial. The cemetery register will be found in the gatehouse as you enter the cemetery, and the memorial register will be found in the left hand rotunda of the memorial as you face the memorial. SCHOOL GROUPS: TEACHERS - PLEASE CLOSELY SUPERVISE YOUR STUDENTS, PARTICULARLY AT THE TYNE COT CEMETERY CROSS OF SACRIFICE Wheelchair access to this cemetery is possible via an entrance at the rear and is signposted from the car park. For further information regarding wheelchair access, please contact our Enquiries Section on 01628 507200.

Panel Numbers quoted at the end of each entry relate to the panels dedicated to the Regiment with which the casualty served. In some instances, where a casualty is recorded as attached to another Regiment, his name may appear within their Regimental Panels. Please refer to the on-site Memorial Register Introduction. The Addenda Panel lists those service personnel whose details are awaiting addition to the Regimental Panels.

The Tyne Cot Memorial is one of four memorials to the missing in Belgian Flanders which cover the area known as the Ypres Salient. Broadly speaking, the Salient stretched from Langemarck in the north to the northern edge in Ploegsteert Wood in the south, but it varied in area and shape throughout the war.

The site of the Menin Gate was chosen because of the hundreds of thousands of men who passed through it on their way to the battlefields. It commemorates those of all Commonwealth nations, except New Zealand, who died in the Salient, in the case of United Kingdom casualties before 16 August 1917 (with some exceptions). Those United Kingdom and New Zealand servicemen who died after that date are named on the memorial at Tyne Cot, a site which marks the furthest point reached by Commonwealth forces in Belgium until nearly the end of the war. Other New Zealand casualties are commemorated on memorials at Buttes New British Cemetery and Messines Ridge British Cemetery.

The TYNE COT MEMORIAL now bears the names of almost 35,000 officers and men whose graves are not known. The memorial, designed by Sir Herbert Baker with sculpture by Joseph Armitage and F.V. Blundstone, was unveiled by Sir Gilbert Dyett on 20 June 1927.

The memorial forms the north-eastern boundary of TYNE COT CEMETERY, which was established around a captured German blockhouse or pill-box used as an advanced dressing station. The original battlefield cemetery of 343 graves was greatly enlarged after the Armistice when remains were brought in from the battlefields of Passchendaele and Langemarck, and from a few small burial grounds. It is now the largest Commonwealth war cemetery in the world in terms of burials. At the suggestion of King George V, who visited the cemetery in 1922, the Cross of Sacrifice was placed on the original large pill-box. There are three other pill-boxes in the cemetery.

There are now 11,961 Commonwealth servicemen of the First World War buried or commemorated in Tyne Cot Cemetery, 8,373 of these are unidentified.