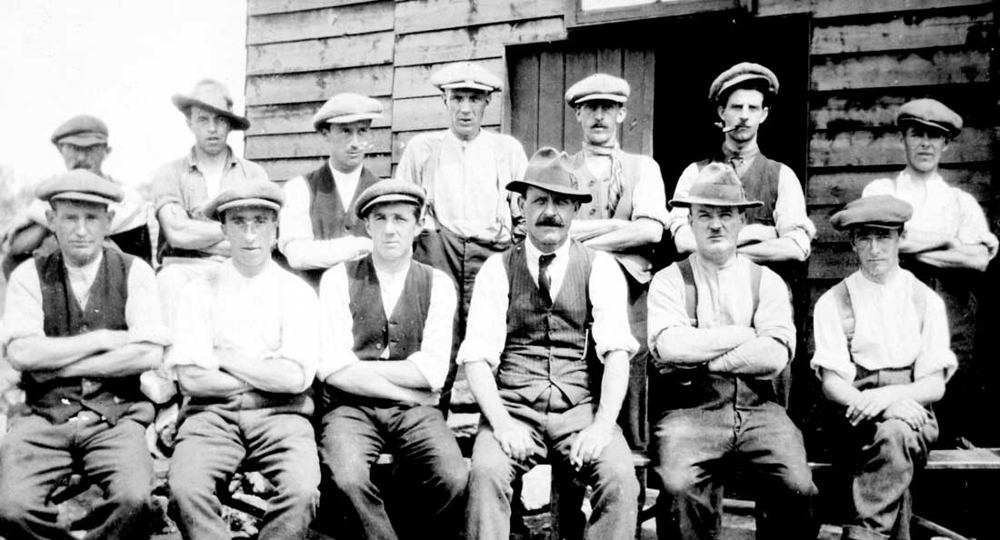 Although post-traumatic stress disorder (PTSD) was not understood as it is today in 1918, a fascinating account of the Commission’s early years by one of its draughtsmen discusses the therapeutic benefit of remaining on the Continent after the war.

Noting how many demobbed men “collapsed under the strain of the rush and tear of city life” back in the UK, T. Gordon Bryceson described how Commission work gave them “the opportunity of quietly and gradually adapting…to civilian life again”. Furthermore, the rural location of the French Headquarters at St. Omer “had a soothing effect on war-strained nerves”.

There are numerous tales of gardeners who were eager to stay behind to tend the graves of fallen comrades. One such was Jack Kingston, whose best friend Ernest Goodall was killed next to him during the ‘Hundred Days Offensive’ that would lead to the end of the war. Jack worked at several cemeteries after the fighting ended. 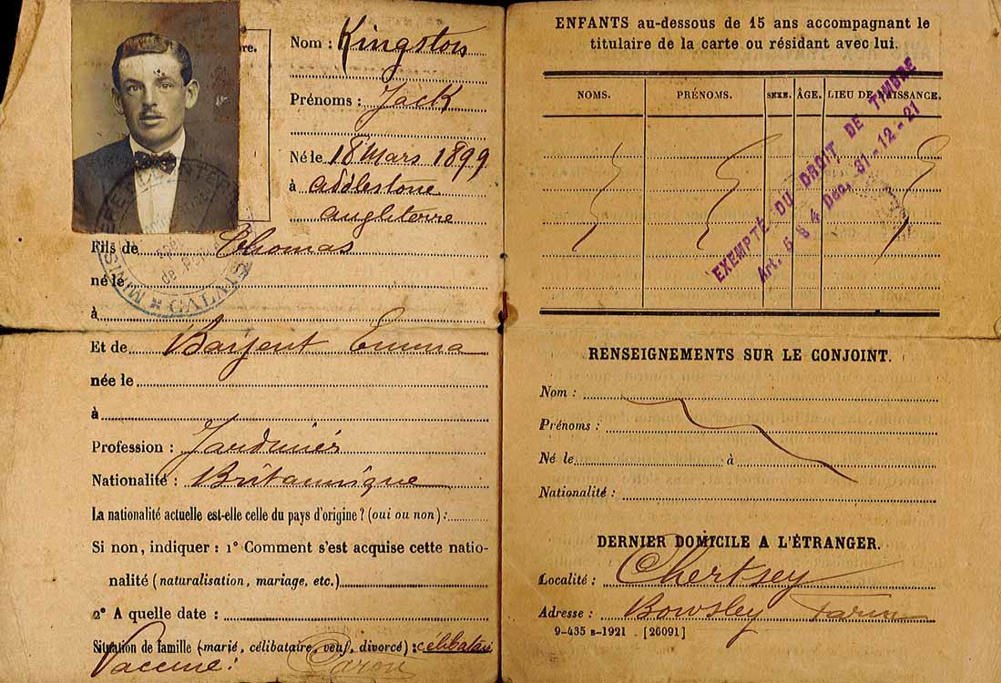 In 1923 he made his way to Lijssenthoek Military Cemetery to visit Ernie’s grave – Plot XXV, Row C, Grave 26A. Jack would eventually return to Surrey and start a family. Throughout his life he remained, according to his granddaughter, “deeply anxious that the 1914-18 war and the men who fought in it would be forgotten”. 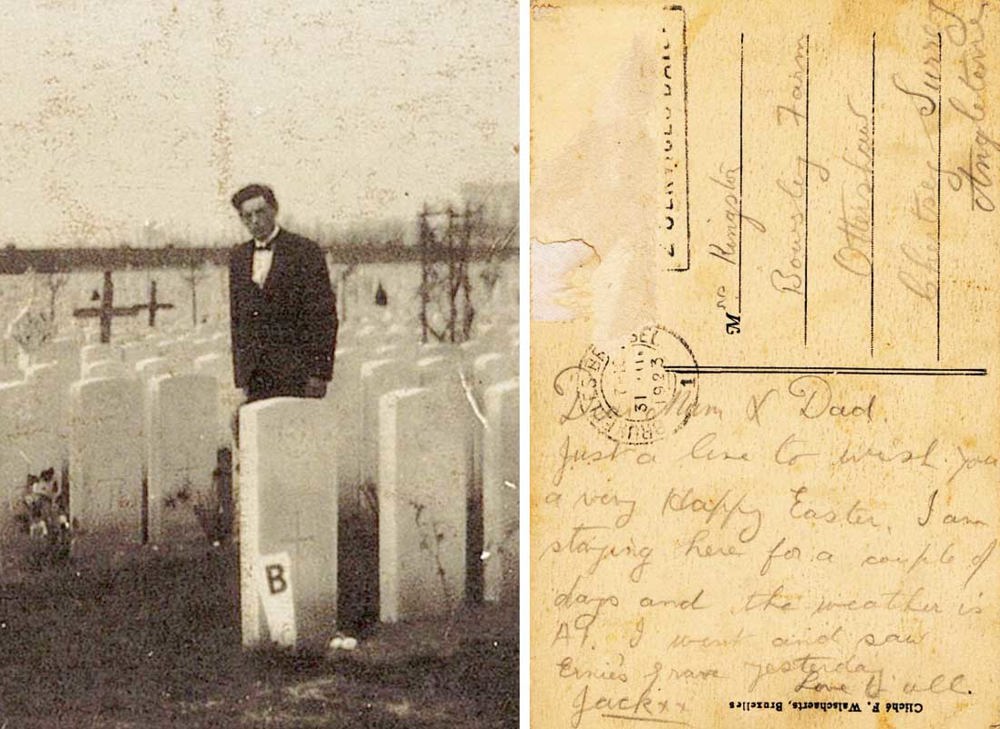 Photo of Jack Kingston visiting the grave of his friend Ernest Goodall in Lijssenthoek Military Cemetery. Postcard sent by Jack Kingston to his family back in England. © CWGC.

In 1935 the Head Gardener of Etaples Military Cemetery delivered a moving account of his sense of duty in a radio address to mark the Armistice anniversary. A gunner who fought on the Somme, Mr. Brook stated that “The consolation it has brought to hundreds of thousands of relatives and the grateful thanks we receive make us feel our work is for a sacred and noble purpose." 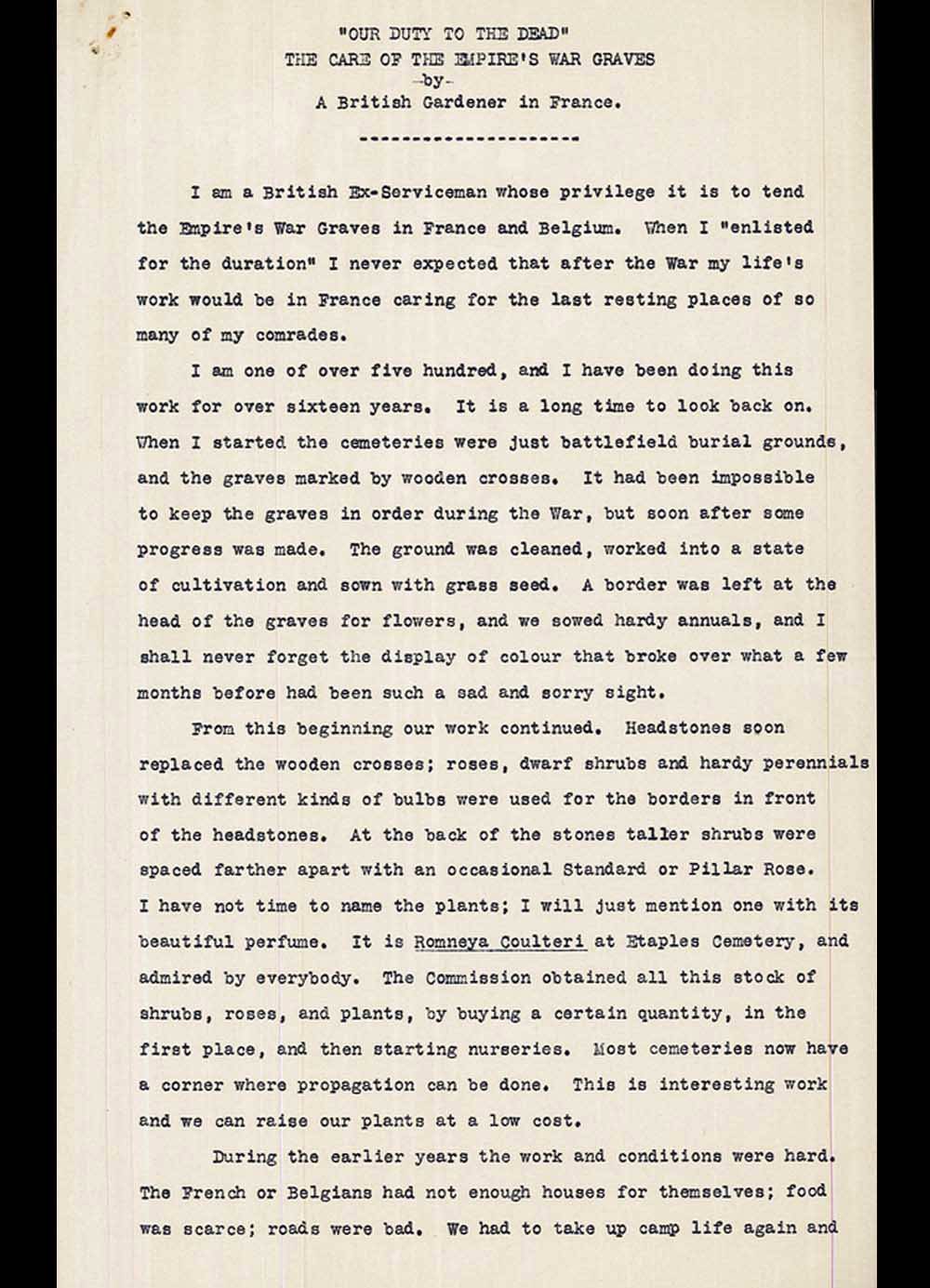 Both Jack Kingston and Mr. Brook demonstrate the sense of loving guardianship over the dead that Rudyard Kipling pays tribute to in his short story ‘The Gardener’ (1926), where the humble Commission employee is elevated to a Christ-like status in understanding the secrets of the dead and those who come to mourn.

Being immersed in our tranquil sites provided healing comfort for many individuals. Yet there was also productive energy to be harnessed by Commission staff working and living together: lively social committees were eventually formed, and even marriages and baptisms were not uncommon. With these new sources of enjoyment and hope, it became apparent that the emerging cemeteries and memorials were just as much creations of the living as the dead. 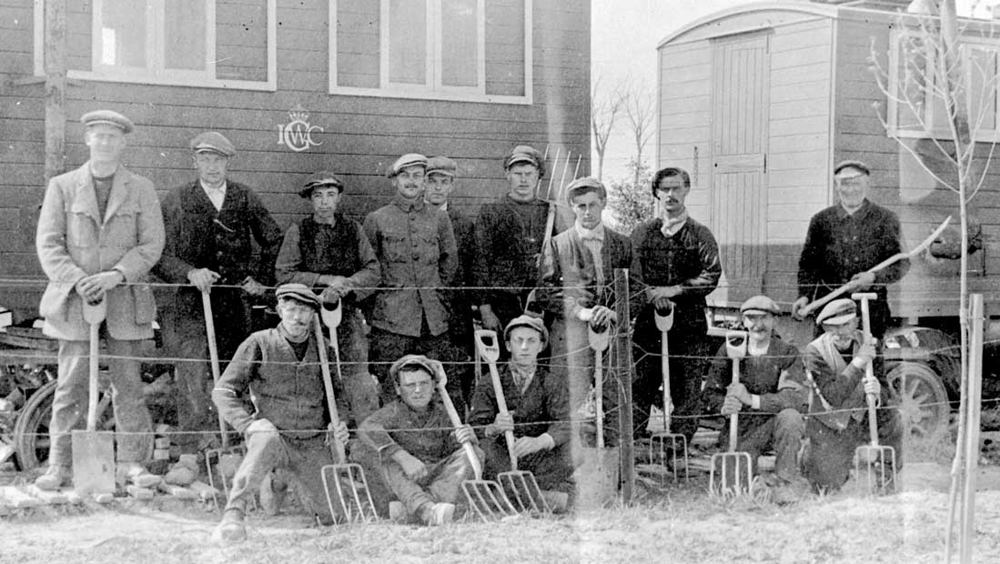 A labour of love

Many of our cemeteries were designed by a team of Junior Architects working underneath the Principals, all of whom were veterans of the war.

One of the most poignant cases was that of Lieutenant Colonel Henry Cart de Lafontaine, an architect and the Commission’s Chief Inspector of Works. Before the war he was a pupil of Reginald Blomfield, later one of the Commission’s Principal Architects. In 1914 he joined the 4th Royal Fusilier Battalion of the London Regiment as a Captain. He was mentioned in Despatches for his bravery in battle.

On 27 June 1915, during fighting at Neuve-Chapelle in France, his headquarters suffered a direct hit by an enemy shell. His second-in-command was killed, while he himself experienced acute shellshock. A year later his younger brother Alfred died at the Battle of the Somme. 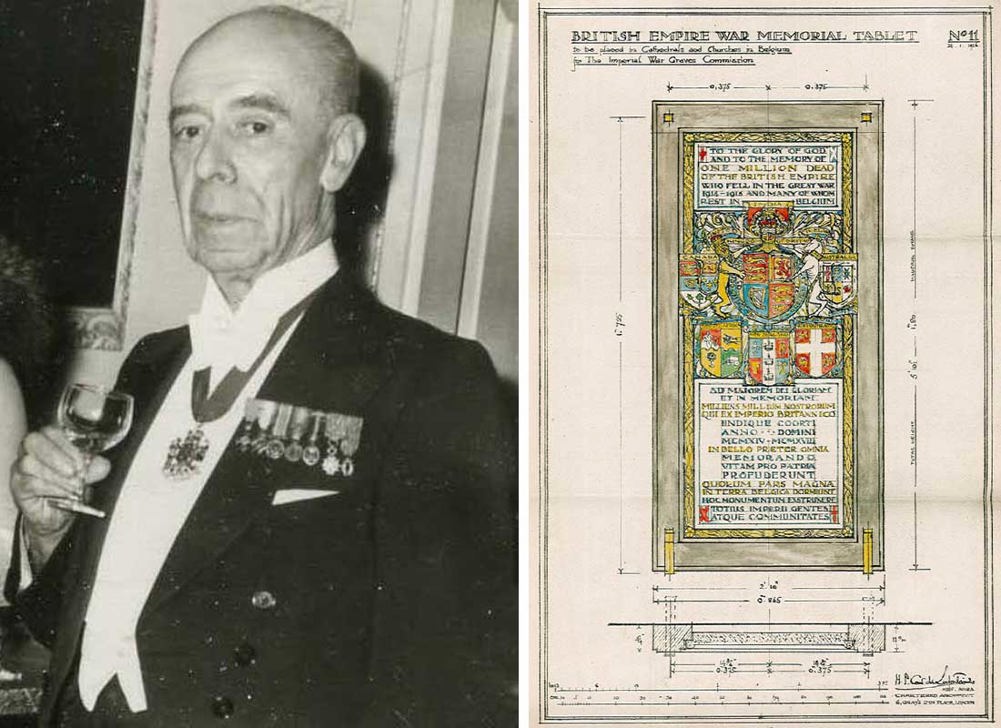 In 1919 Cart de Lafontaine was appointed to the Commission, primarily tasked with ensuring the standardisation of war grave plots in municipal cemeteries. He also designed striking memorial tablets for over thirty cathedrals in France and Belgium.

After resigning in 1920, Cart de Lafontaine requested special permission to design Carnoy Military Cemetery in France, where his brother was buried. A true labour of love, he asked not to be paid for the work. The cemetery commemorates more than 850 casualties. 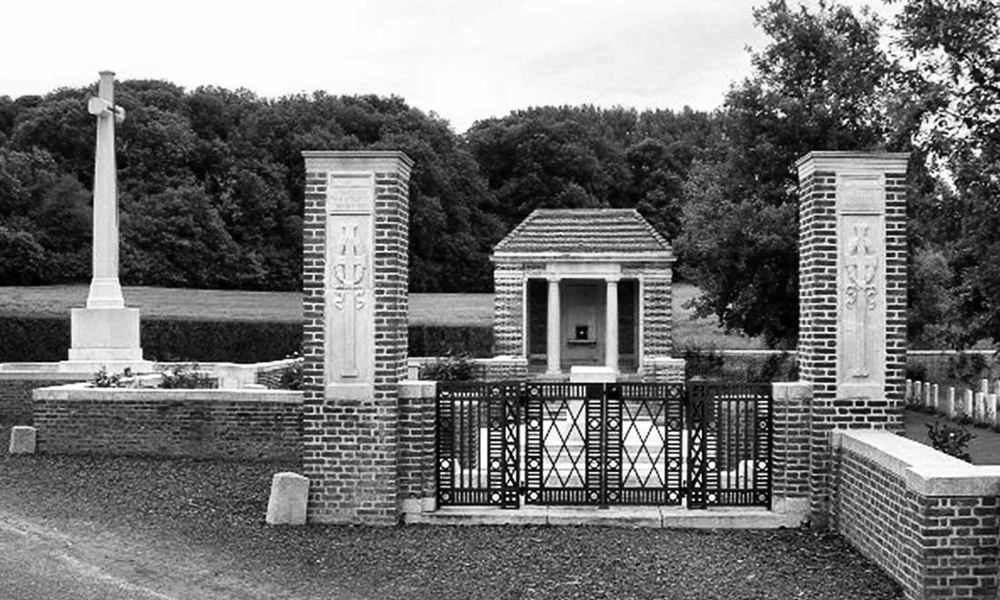 The most famous example is Commissioner and Literary Adviser Rudyard Kipling. A firm supporter of the war effort, Kipling took part in recruitment rallies and wrote propagandist pieces for the Government. He helped his only son John secure a post with the Irish Guards, despite the 17 year-old having failed medical tests on account of his severe short-sightedness. 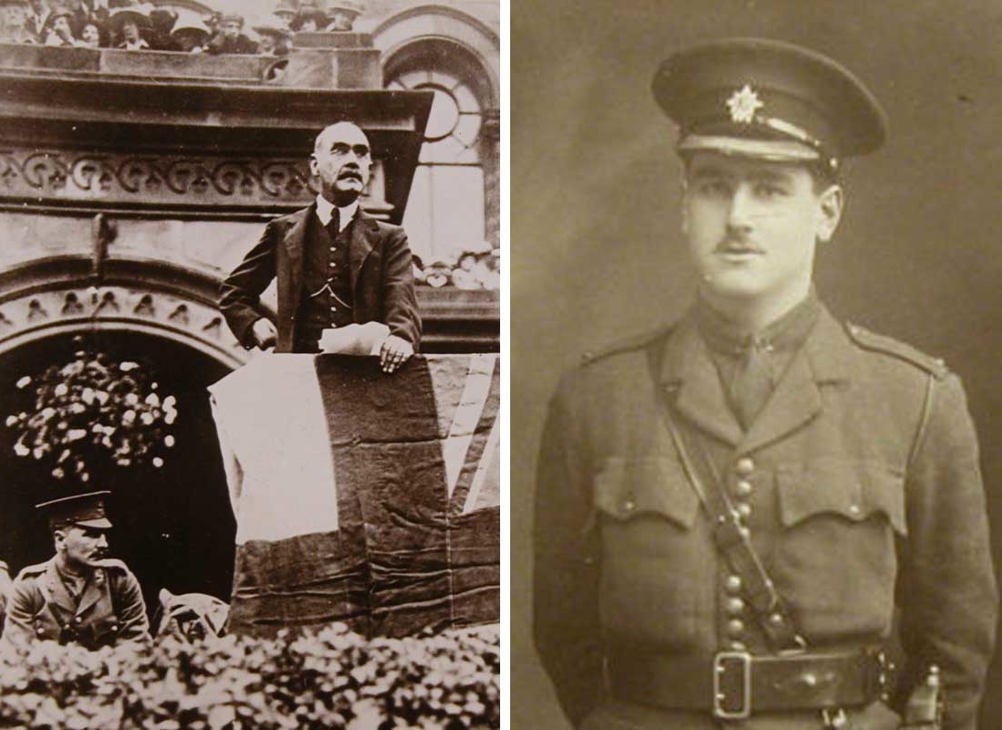 Soon John was in France preparing for the Battle of Loos, the first large-scale British offensive of the war. On 19 September 1915 he wrote home discussing the relentlessness of life at the front: “We work like fiends…I’ve done enough marching in the last month to sicken me of it for life”. Dreaming of “a hot bath…[and] dinner at the Ritz”, he also requested a new identity tag, as his previous one was lost.

This would be the last time Kipling ever heard from his son. The next communication was a telegram telling him that John had been missing since 27 September. Frantic attempts were made to ascertain how and where he might have fallen or been captured; Kipling even travelled to the battlefields to search in person. For a long time he clung to the hope that John was alive, but eventually acknowledged his likely fate.

The exact nature of John’s death was unconfirmed: all Kipling could ascertain was that under heavy machine-gun fire he had been wounded and crawled into a building that was soon occupied by the Germans. John’s body was never found in Kipling’s lifetime. His name was added to 20,000 others on the Loos Memorial in France, which Kipling and his wife Caroline visited at its unveiling in 1930.

Kipling never publicly discussed the tragedy, but his poem ‘My Boy Jack’ – about a son lost at sea – is a thinly-veiled expression of his anguish. Waves of men advancing and falling in the ebb and flow of battle is a metaphor that resonated with Kipling. He wrote to his author friend Rider Haggard after visiting Bois Guillaume Cemetery, “One never gets over the shock of this Dead Sea of arrested lives”.

“Have you news of my boy Jack?”
Not this tide.
“When d’you think that he’ll come back?”
Not with this wind blowing, and this tide.

“Has any one else had word of him?”
Not this tide.
For what is sunk will hardly swim,
Not with this wind blowing, and this tide.

“Oh, dear, what comfort can I find?”
None this tide,
Nor any tide,
Except he did not shame his kind —
Not even with that wind blowing, and that tide.

Then hold your head up all the more,
This tide,
And every tide;
Because he was the son you bore,
And gave to that wind blowing and that tide!