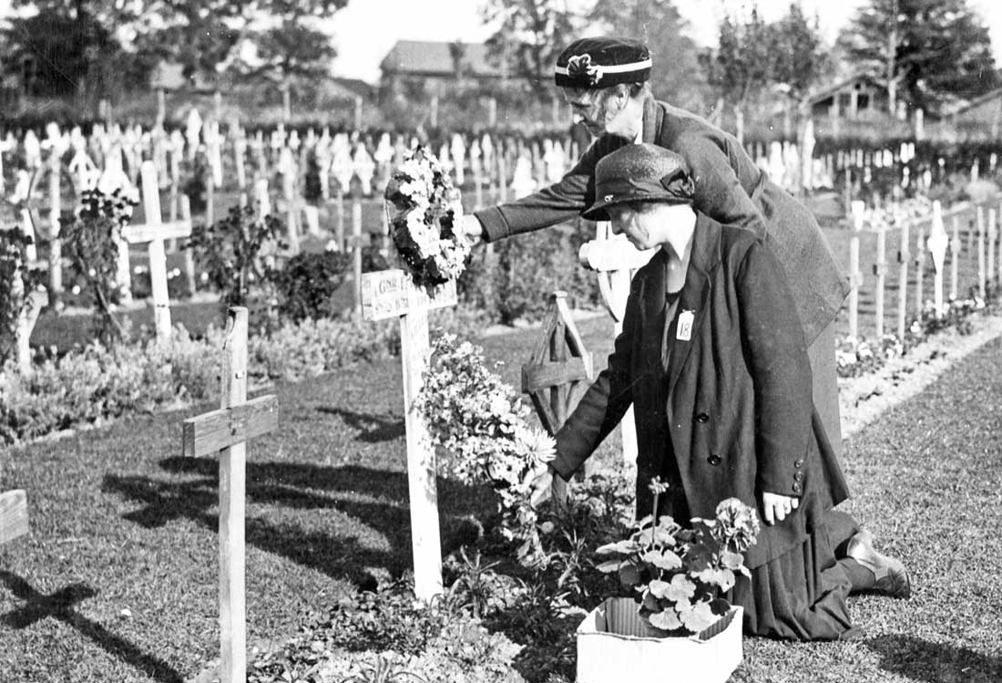 “I did not give them willingly”

Amy Beechey, on being thanked by Queen Mary for sacrificing her five sons

Plenty of anger was directed at the Commission as it established the ground rules for a uniform style of commemoration. Many people resented what they perceived as state-controlled bereavement, losing the ability to make personal decisions about how and where their loved ones would be remembered.

There were several key issues that inflamed public opinion:

On 29 December 1917 Canadian Captain William Arthur Durie was killed near Lens and buried in Corkscrew Cemetery, France. His distraught mother Anna wrote to the Commission questioning whether the grave really contained her son’s body, and if so, she vowed to return him to Canada. 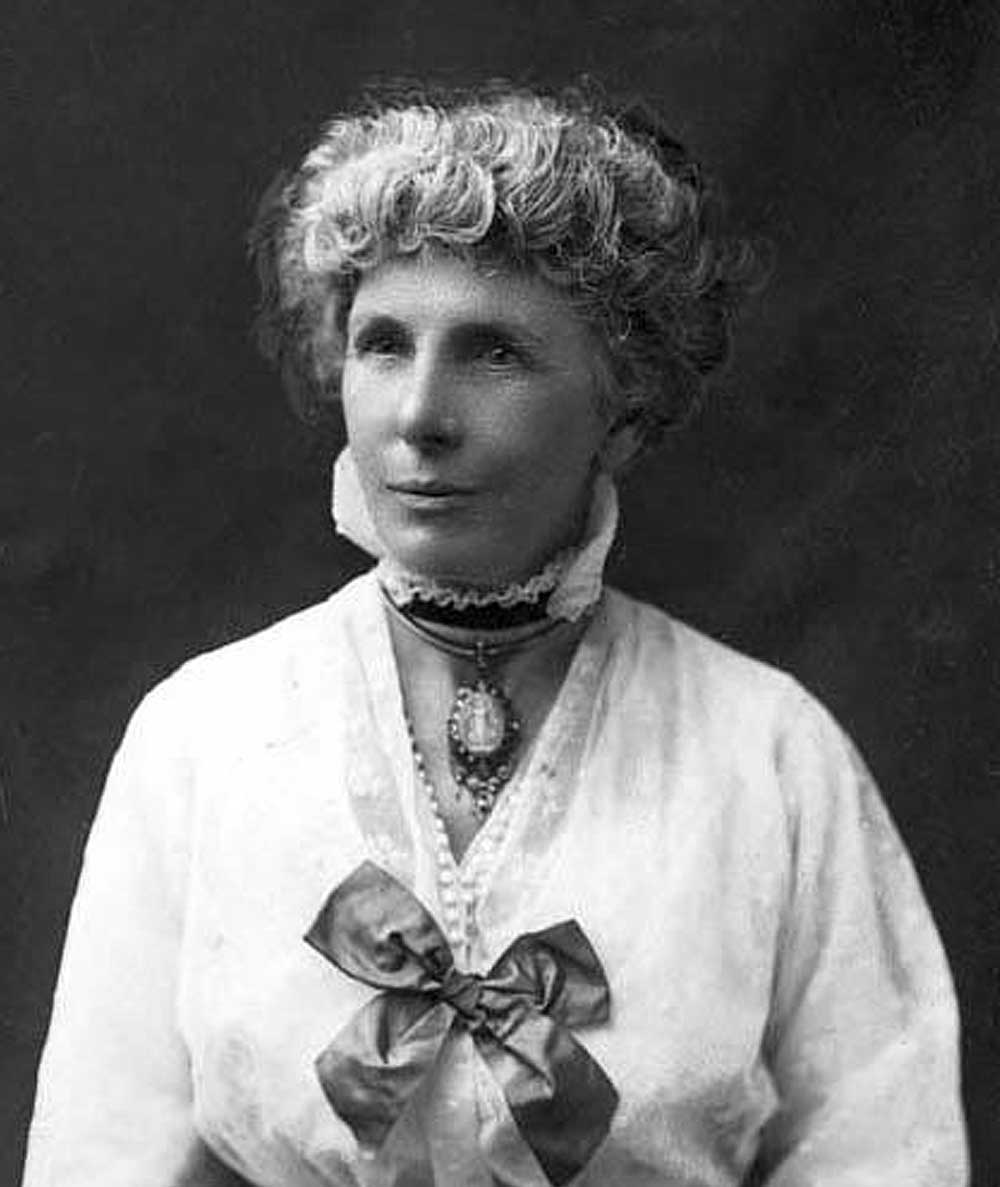 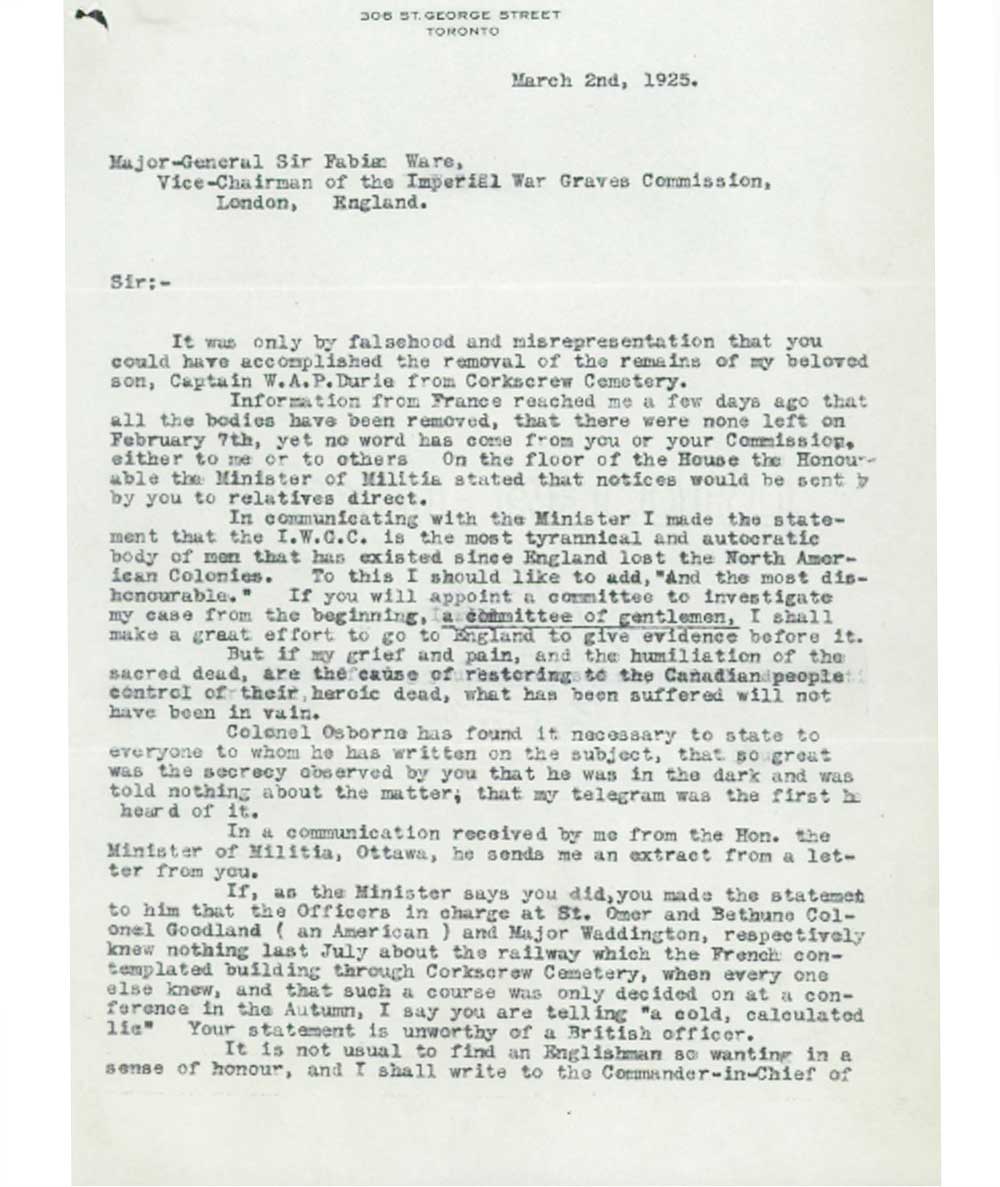 Letter from Anna Durie to Fabian Ware, accusing him and the Commission of lying to her. CWGC Archive 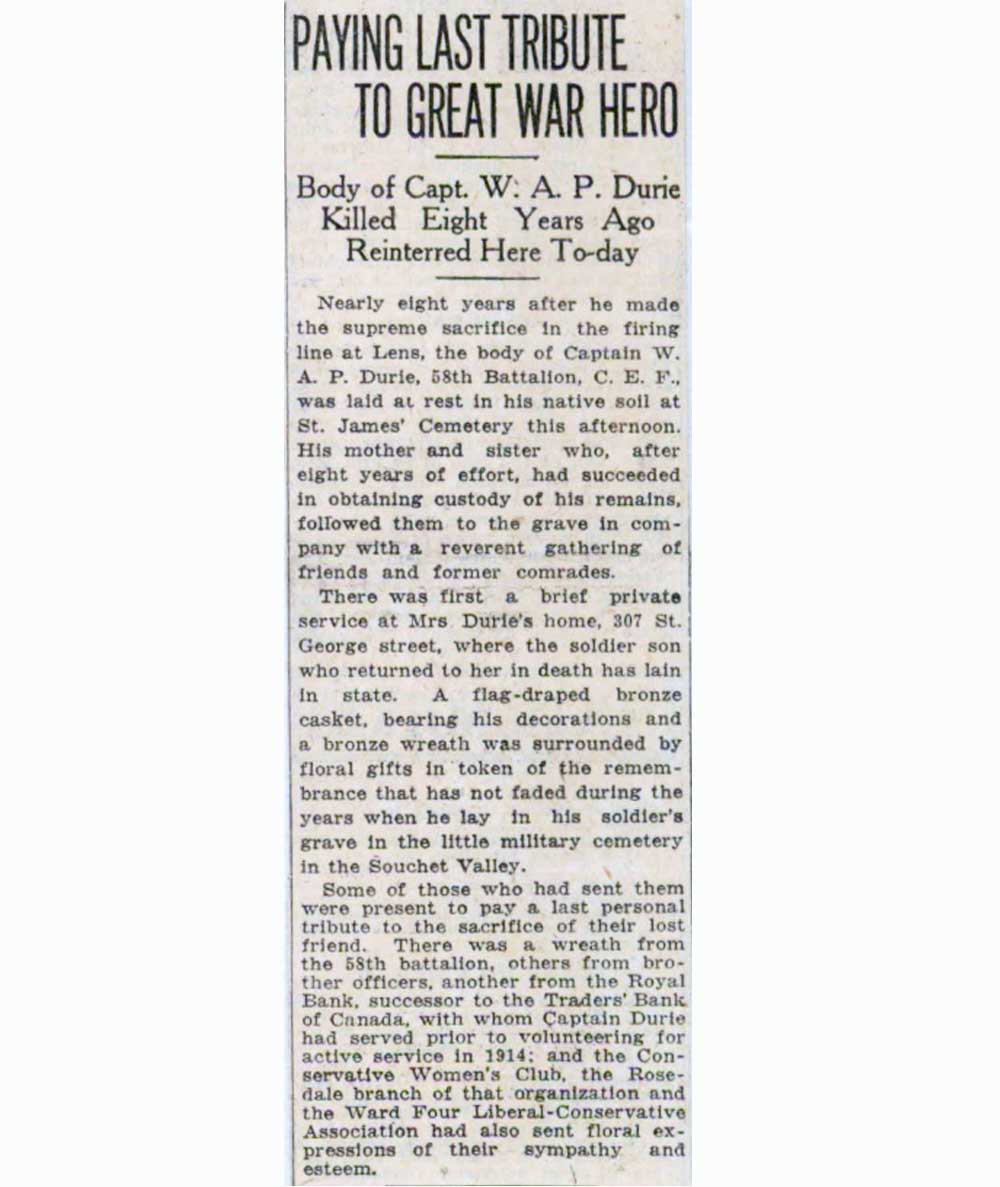 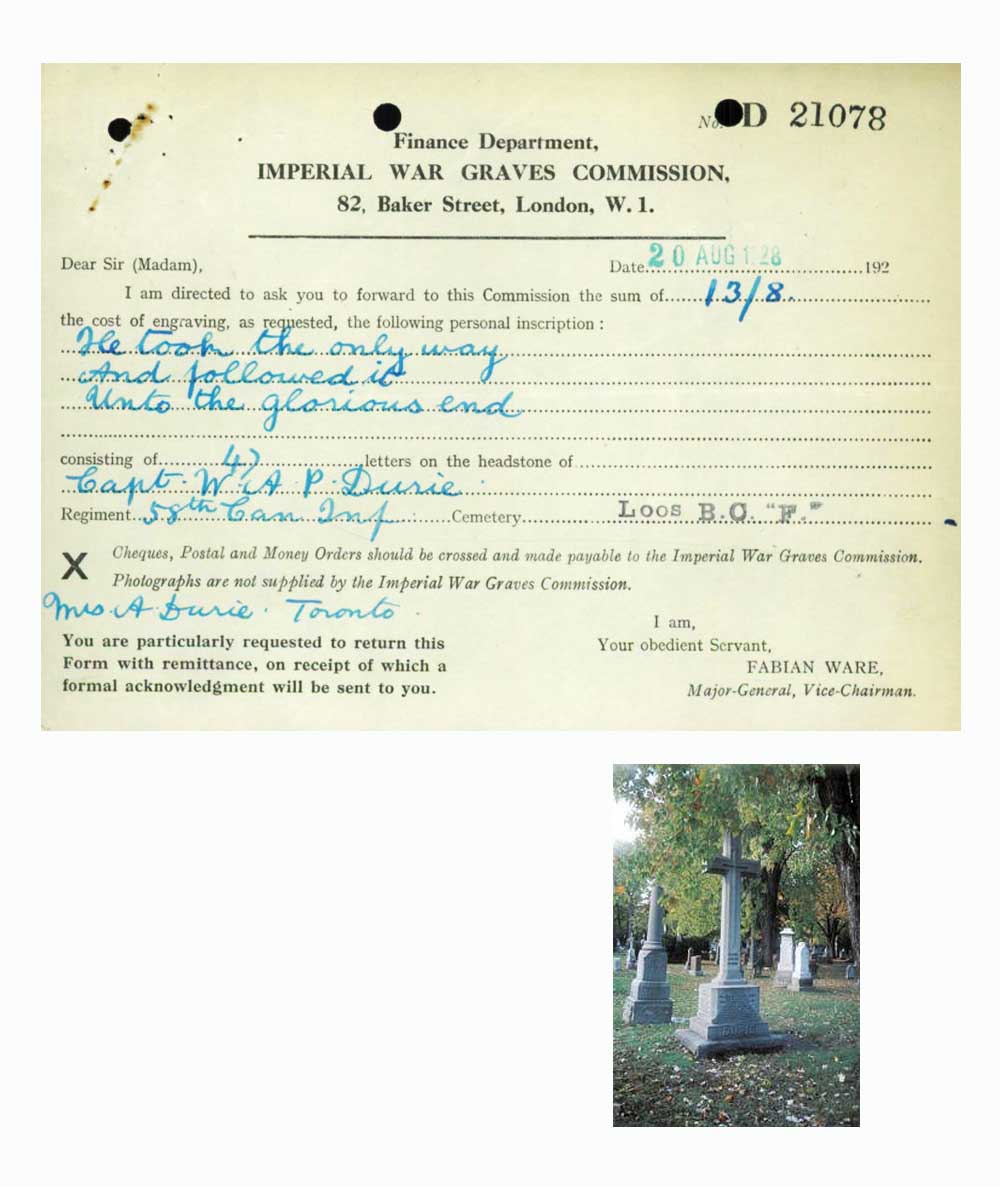 True to her word, in 1921 she attempted but failed to remove William’s coffin. Having declared her intention to shoot anyone who tried to move William’s grave, in March 1925 Anna was furious to learn he had been re-interred at the larger Loos British Cemetery.

“I was going like a criminal, by night, to exhume the body of one of the bravest officers that ever left Canada!”

Wracked with “grief and pain”, she accused the Commission of lying to her, arguing she had been assured Corkscrew Cemetery would not be closed and now her son’s body might be lost.

The next thing anyone knew about the fate of Anna’s son was an article in the Toronto Daily Star in August 1925 describing his “reverent” funeral service at St. James’ Cemetery, Toronto, Canada. The article proclaimed that “after eight years of effort” she had “succeeded in obtaining custody of his remains”.

What “obtaining custody” really meant was stealing into the cemetery under the cover of darkness on 25th July, opening William’s coffin, retrieving most of his remains, packing them up in a case and clandestinely sailing with them to Canada. On hearing of the funeral thousands of miles away, the Commission conducted an investigation and made a grim discovery.

In one last show of rebellion, Anna Durie never acknowledged her successful actions to the Commission. In 1928 she even filled out a form to request a personal inscription for the headstone mistakenly planned for her son’s grave at Loos, knowing he was no longer there. The epitaph she wrote could even be intended as a commentary on her own actions:

“He took the only way / And followed it / Unto the glorious end”.

Women’s forms of protest moved beyond the private sphere and spanned all classes.

One of the most prominent campaigners was a Leeds housewife named Sarah Smith. Smith’s 19 year-old son had died of wounds in 1918 and was buried at Grevillers British Cemetery, France. 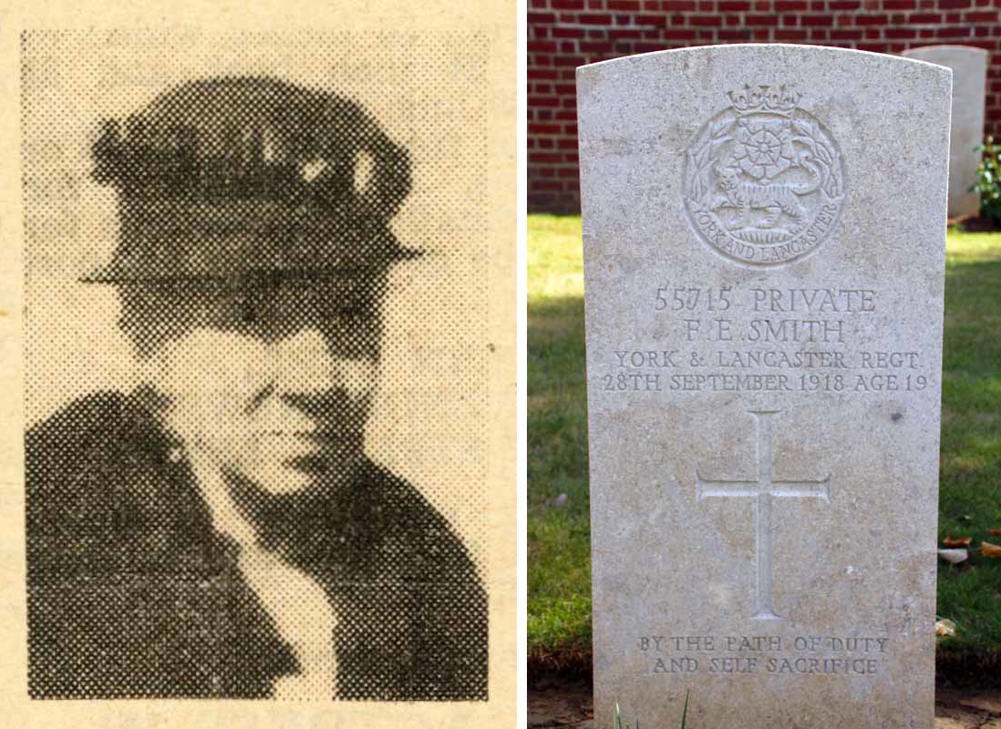 Despairing at the decision not to repatriate the dead, Smith organised a petition lobbying the Prince of Wales – the President of the Commission – to reverse the policy. Speaking on behalf of “brokenhearted subjects”, she claimed “the right which has ever been the privilege of the bereaved” to personally honour their loved ones. Over 2,500 people signed the petition. 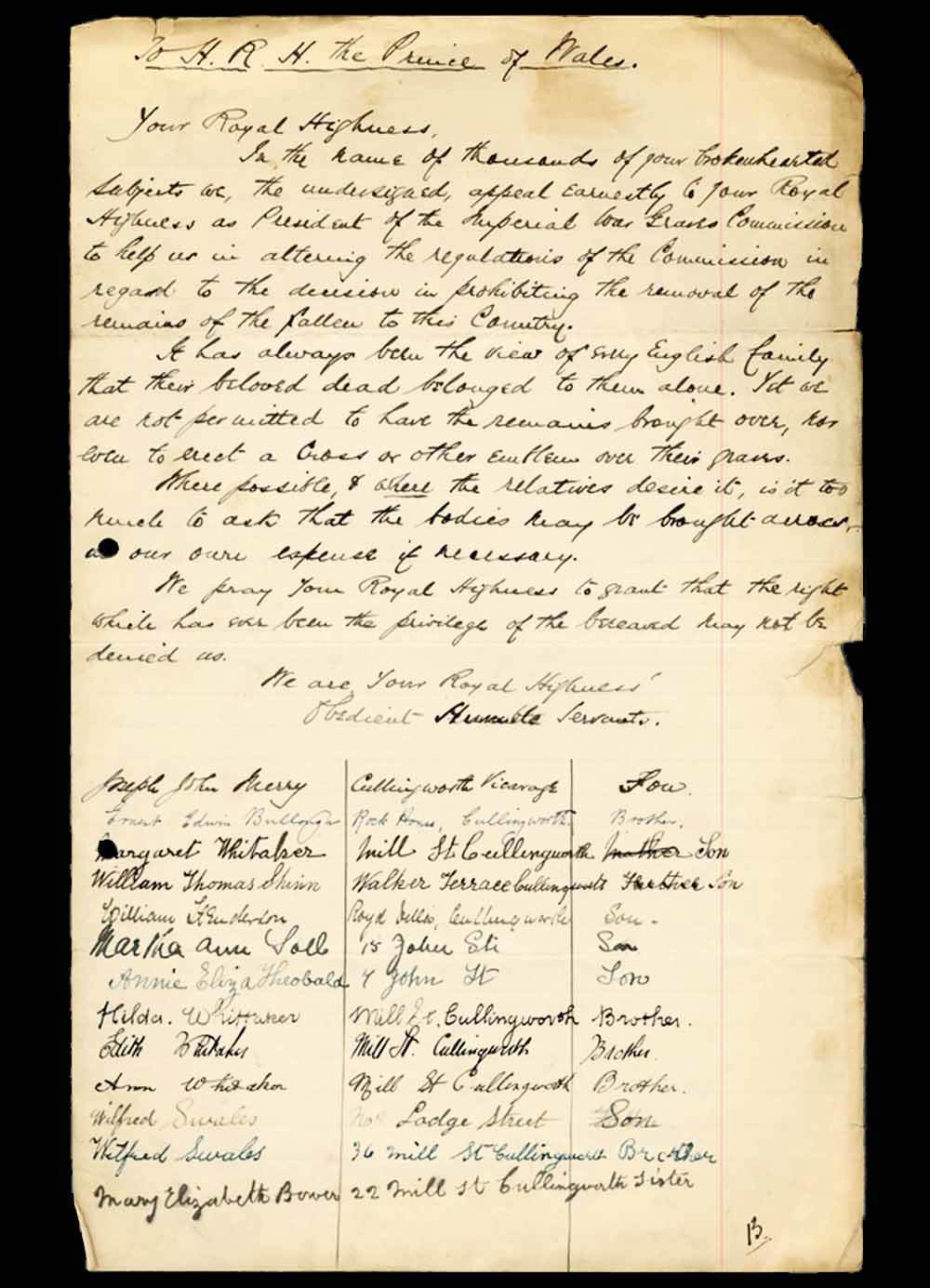 Sarah Smith’s petition for the repatriation of British bodies, May 1919. © CWGC.

Although the petition failed, it led to the creation of the British War Graves Association, a group that opposed the approach of the Commission. Based in Leeds, by 1922 it had over 3,000 members. 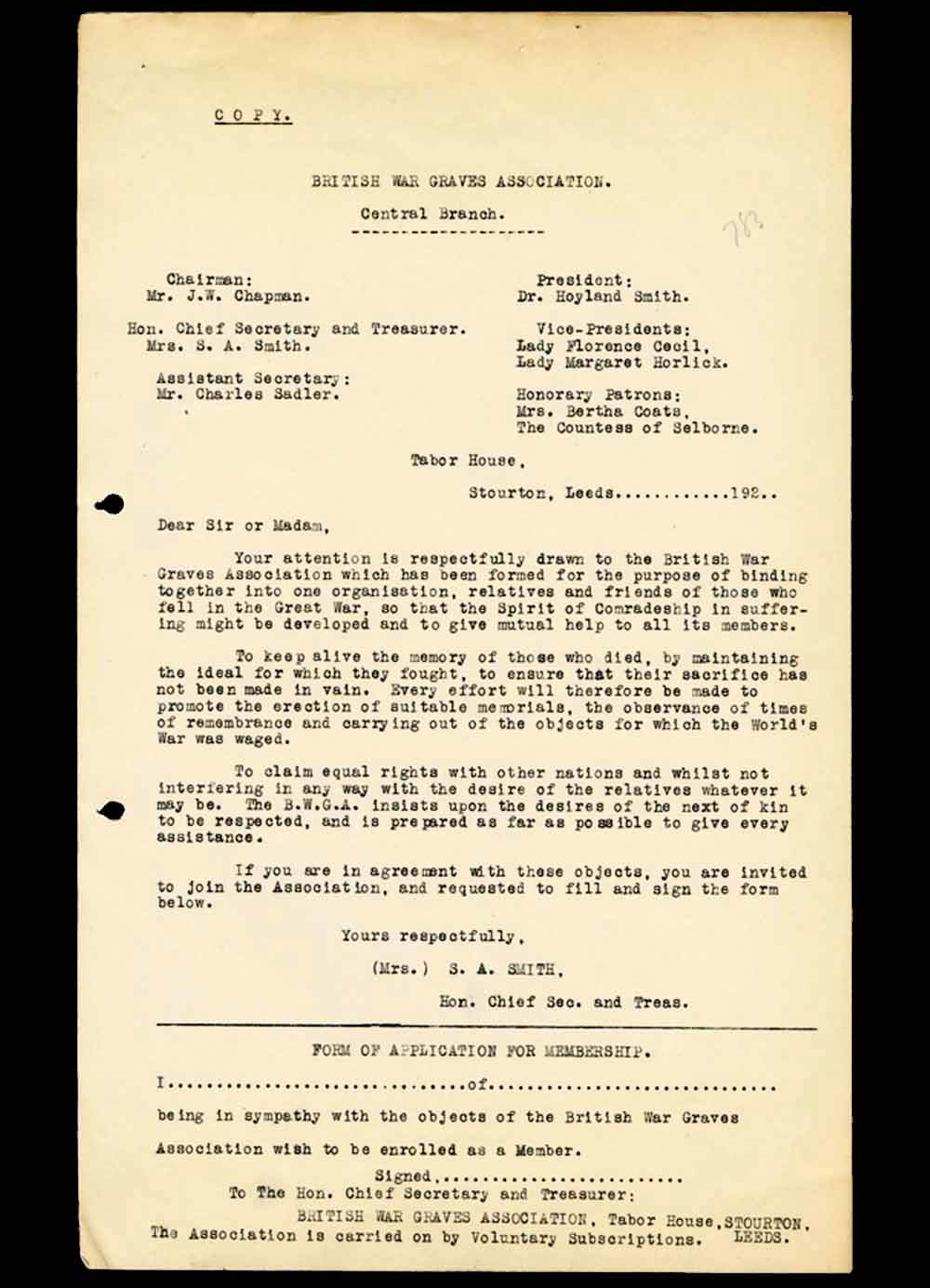 As the Association’s Secretary, Smith wrote to the Commission over many years outlining new demands. These included returning bodies from Germany, ensuring ‘concentrated’ bodies were reburied in coffins, improving the legibility of engraved headstones and providing Government funding to visit graves abroad.

All the requests were politely rejected, leading an increasingly dejected Smith to feel the burden of her responsibility. She wrote, “I find the work of the Association almost too much but nobody will take my place and I feel I must carry on”. 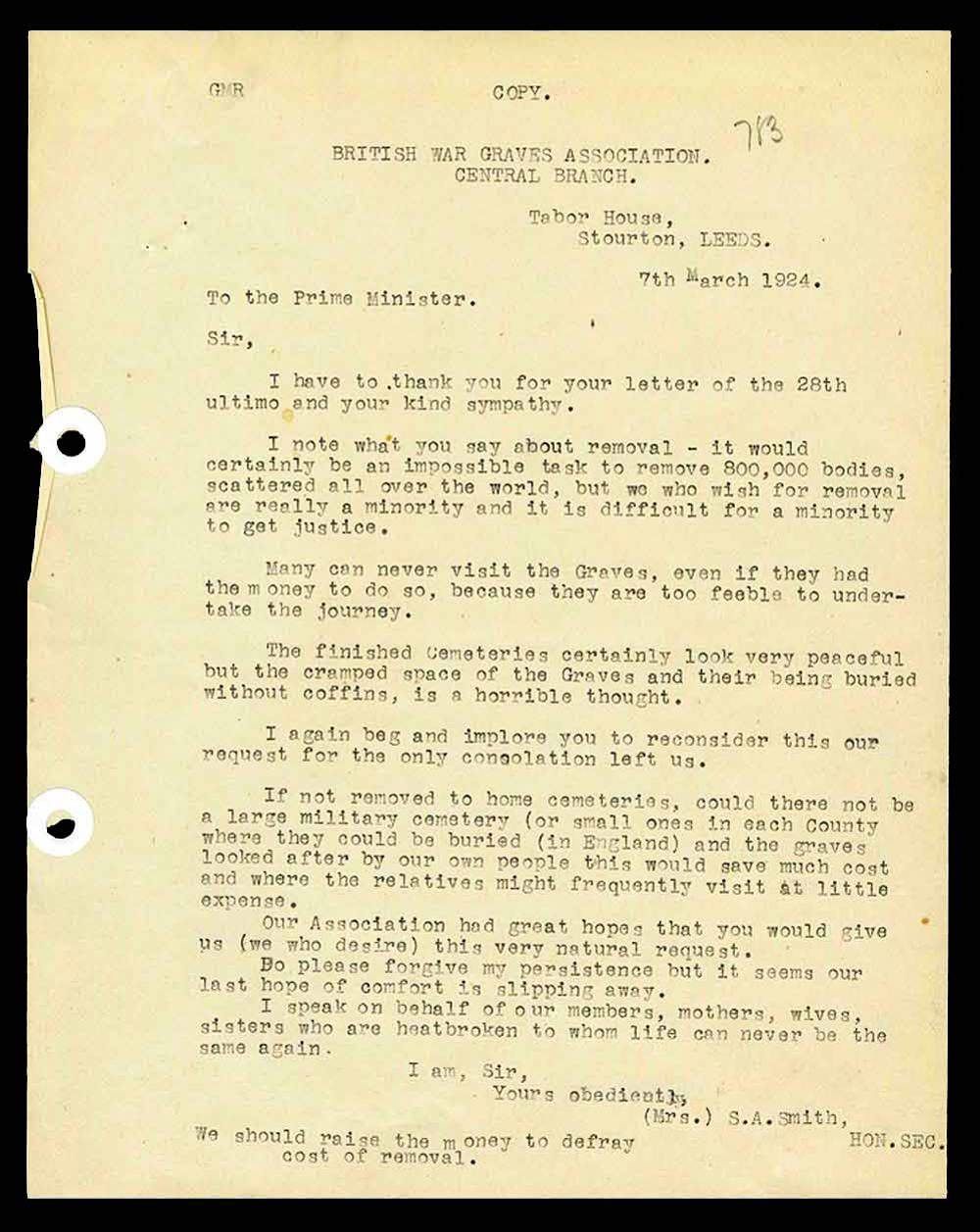 A  letter from Sarah Smith on behalf of the British War Graves Association. © CWGC.

The British War Graves Association eventually shifted its focus to helping relatives visit battlefields abroad. But such was the Commission’s sympathy and respect for Smith’s relentless efforts that when she died in 1936 it paid tribute to her “most valuable services” on behalf of the bereaved. 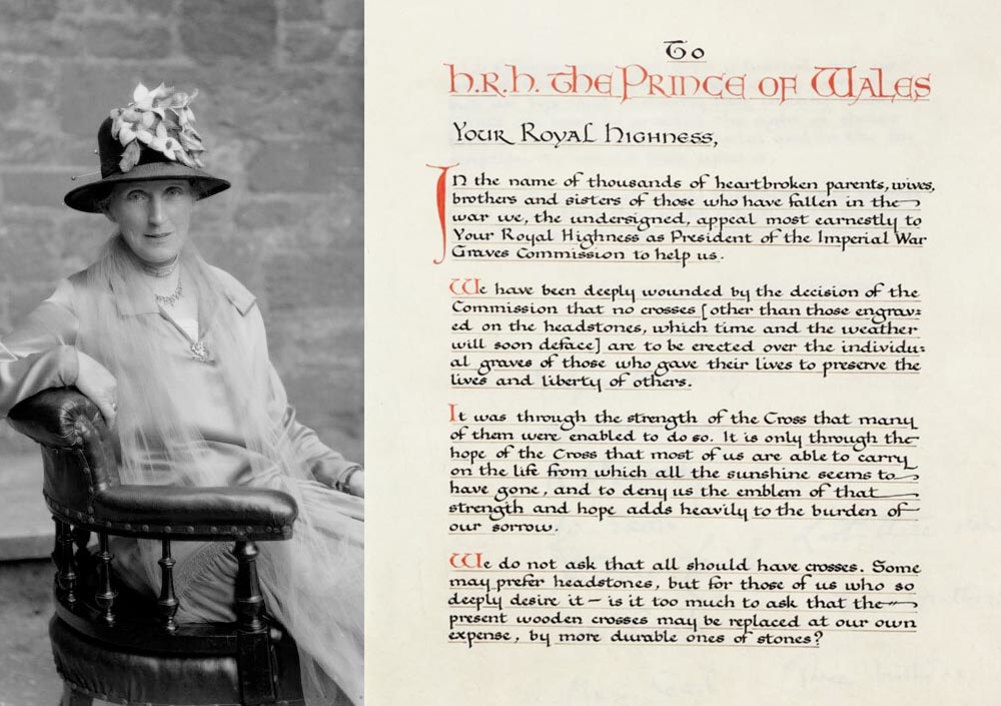 Sara Smith enlisted the help of prominent aristocratic women to further the Association’s cause, including Lady Florence Cecil, wife of the Bishop of Exeter. The couple lost three sons in the war, so Cecil had a personal investment in the work of the Association when she became its Vice-President.

Cecil went on to launch her own petition in 1919, appealing to the Prince of Wales to allow permanent headstones in the shape of a cross. It garnered 8,000 signatures, and alongside many are poignant details of the dead. Mrs. Nicholson simply states, “An only son”. Mrs. W. de Courcy Stretton records “Four dear sons (out of five) have given their lives for their King and Country” 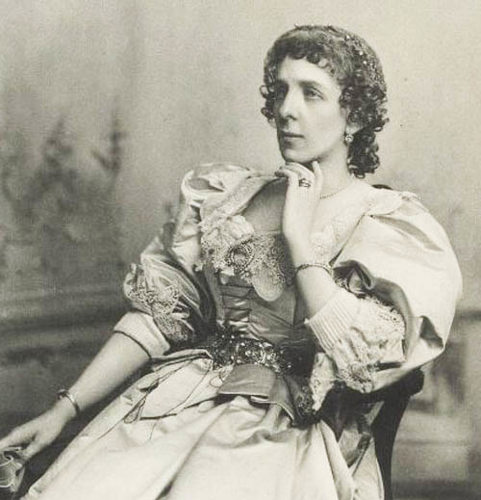 The Countess of Selborne

Another well-heeled ally of Smith’s was the political and women’s rights activist Beatrix Maud Palmer, Countess of Selborne; she was born a Cecil and was the sister-in-law of Lady Florence. Selborne wrote to senior politicians in support of the British War Graves Association. She declared herself a “heretic on the subject of our soldiers’ graves” and repeatedly appealed “to let these poor women bring home the bodies of their dead sons”.

In 1920 Selborne published a scathing article in the National Review. It decried the Commission’s policy of equality as a form of “National Socialism”, from the uniform cemetery designs to the veto on repatriation.

“This conscription of bodies is worthy of Lenin.” 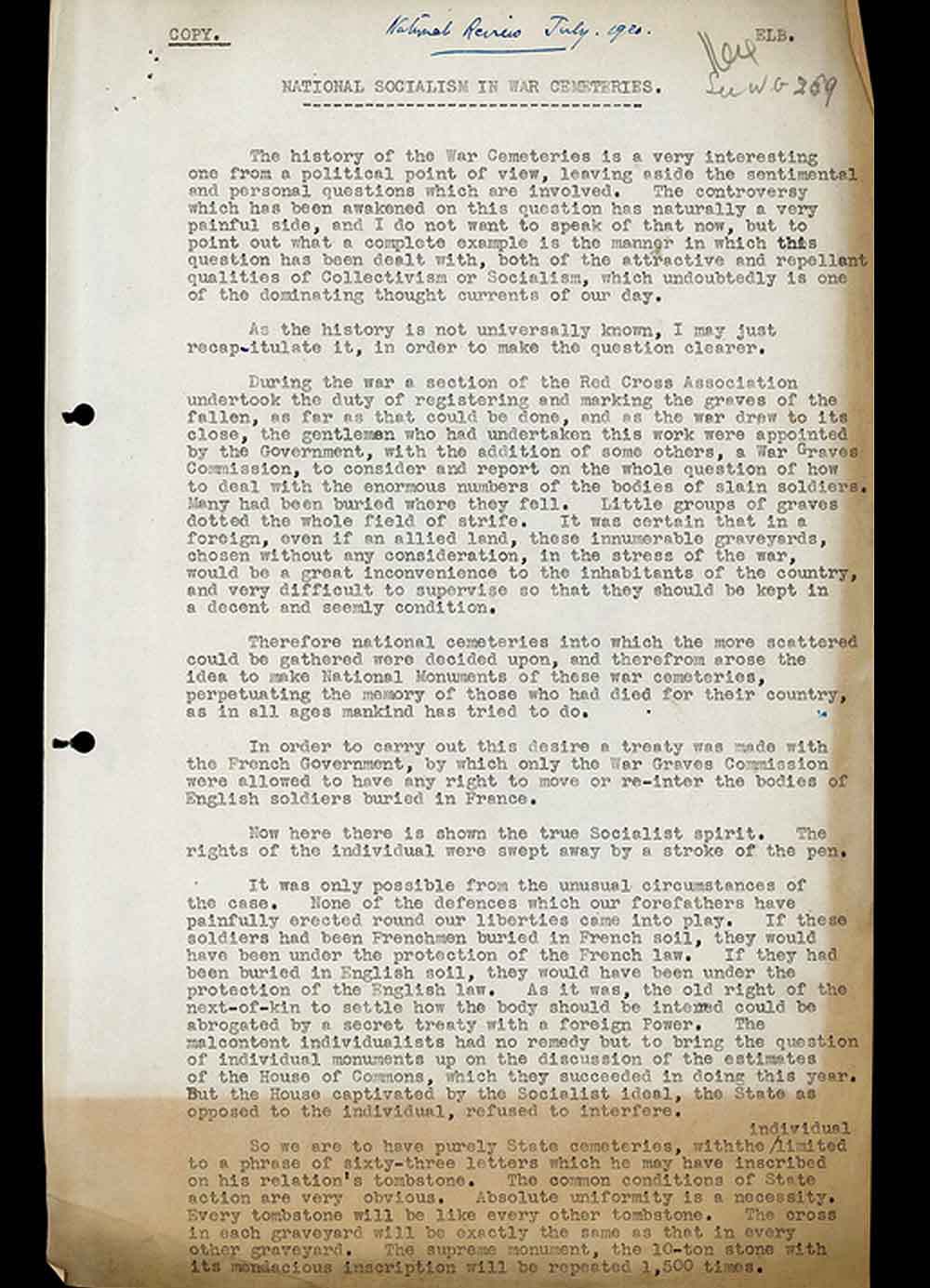 The commission defends itself

In the wake of individual and collective opposition across nations and classes, the Commission was on the defensive.

One dramatic riposte came from Sir Frederic Kenyon, who engaged in a quarrel-by-correspondence with Lord Hugh Cecil – the brother-in-law of Lady Florence Cecil. Lord Hugh publicly denounced the new war cemeteries as “anti-Christian”, prompting an angry letter from Kenyon in which he cites the Cross of Sacrifice as proof to the contrary. 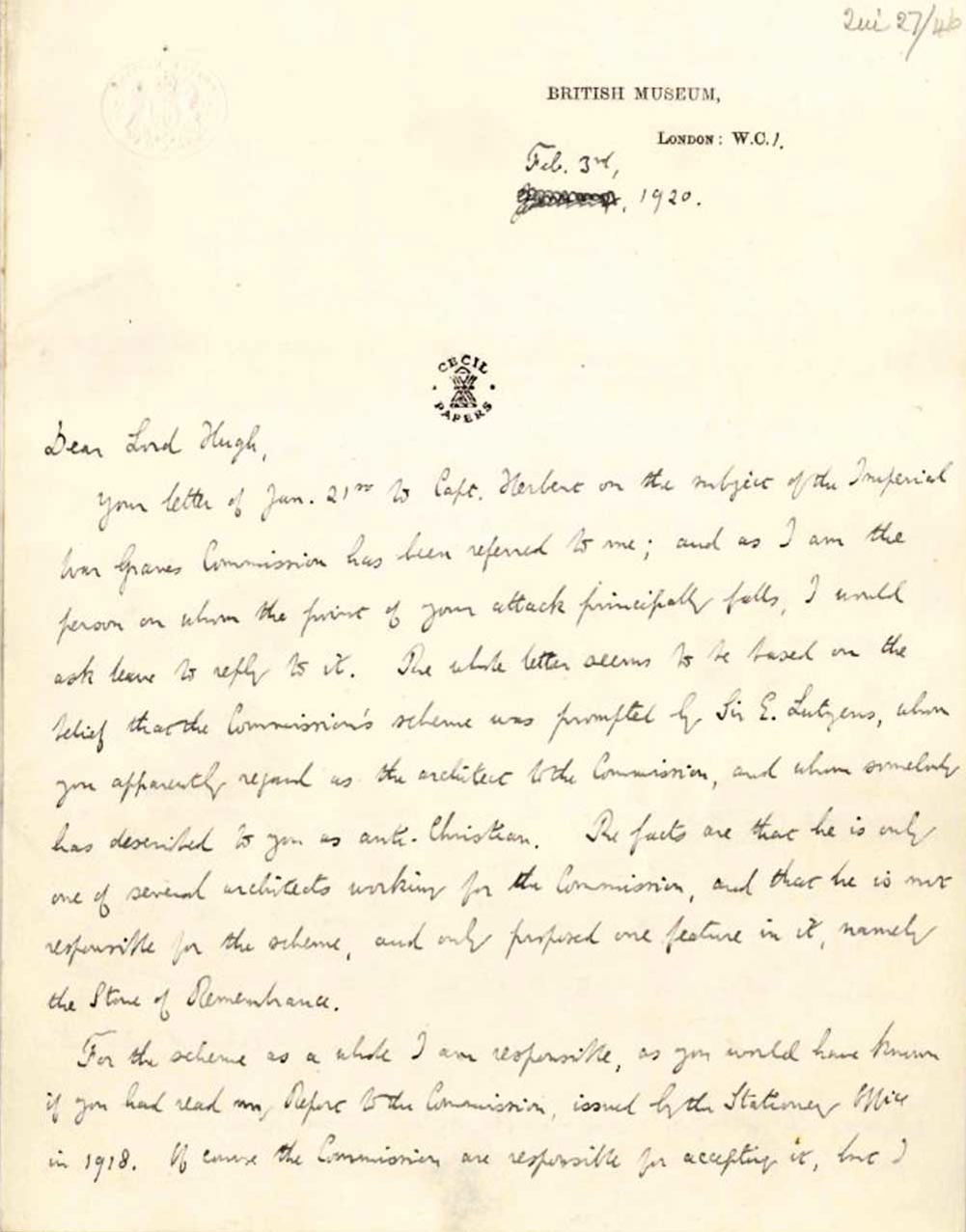 Letter from Sir Frederic Kenyon to Lord Hugh Cecil defending the Commission, 3 February 1920. Reproduced with permission of the Marquess of Salisbury, Hatfield House.

Reminding Lord Hugh that “I have relations and many friends lying in these cemeteries”, Kenyon almost sardonically remarks: “I would not say that I am as good a Christian as you, but I would ask you to believe that I am as sincere a one as you”. He also argues for the importance of the Stone of Remembrance as a “universal” symbol for each visitor “to attach to it a meaning or no meaning, as he may choose”. 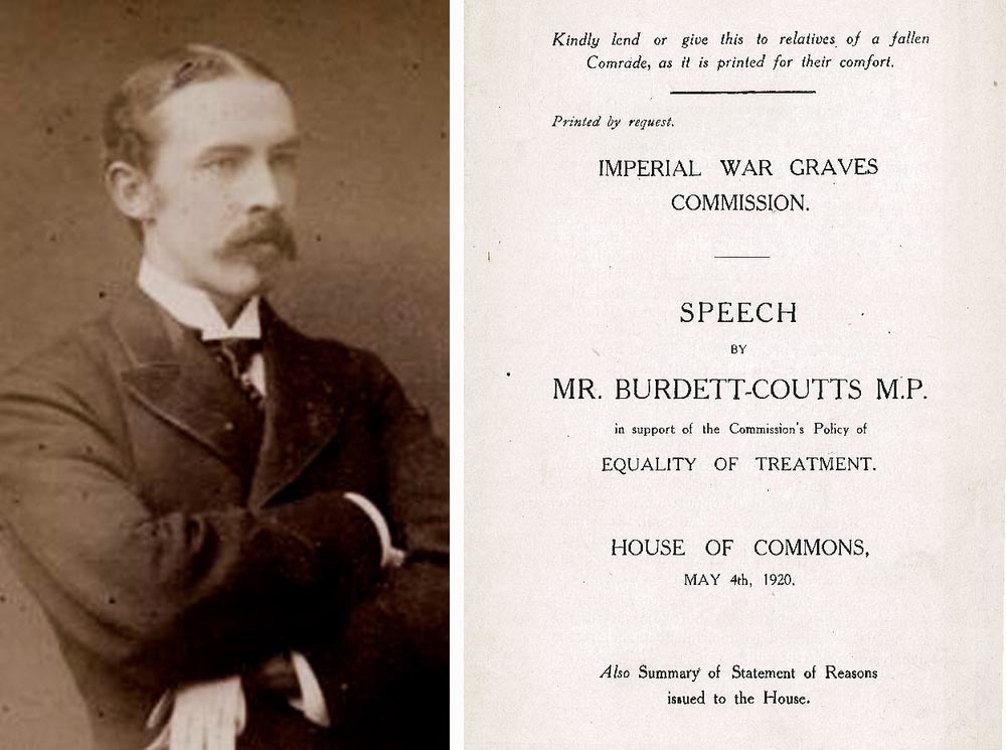 Following vocal opposition from some MPs and other prominent figures, a debate was held in Parliament on the “resentment aroused amongst relatives of fallen soldiers” by the Commission’s philosophy and methods.

With some coaching from Rudyard Kipling, the MP William Burdett-Coutts eloquently presented the case for our work. Assuring the House that the Commission was guided by “infinite consideration and sympathy”, he emphasised the breadth of military, religious and diplomatic figures who had been consulted in developing the cemeteries. He declared that “Nothing could be further from the truth than to say that the Commission is animated by the spirit of officialdom and bureaucracy”; rather, it strove to represent “the union of all, in motive, in action and in death”.

Winston Churchill, the then-Secretary of State for War and thereby the Chair of the Commission, closed the debate with words of resounding approval. His support had not been guaranteed, and therefore came as a relief to Burdett-Coutts and Fabian Ware. After the debate it was generally agreed that the Commission would be able to continue its work unimpeded. 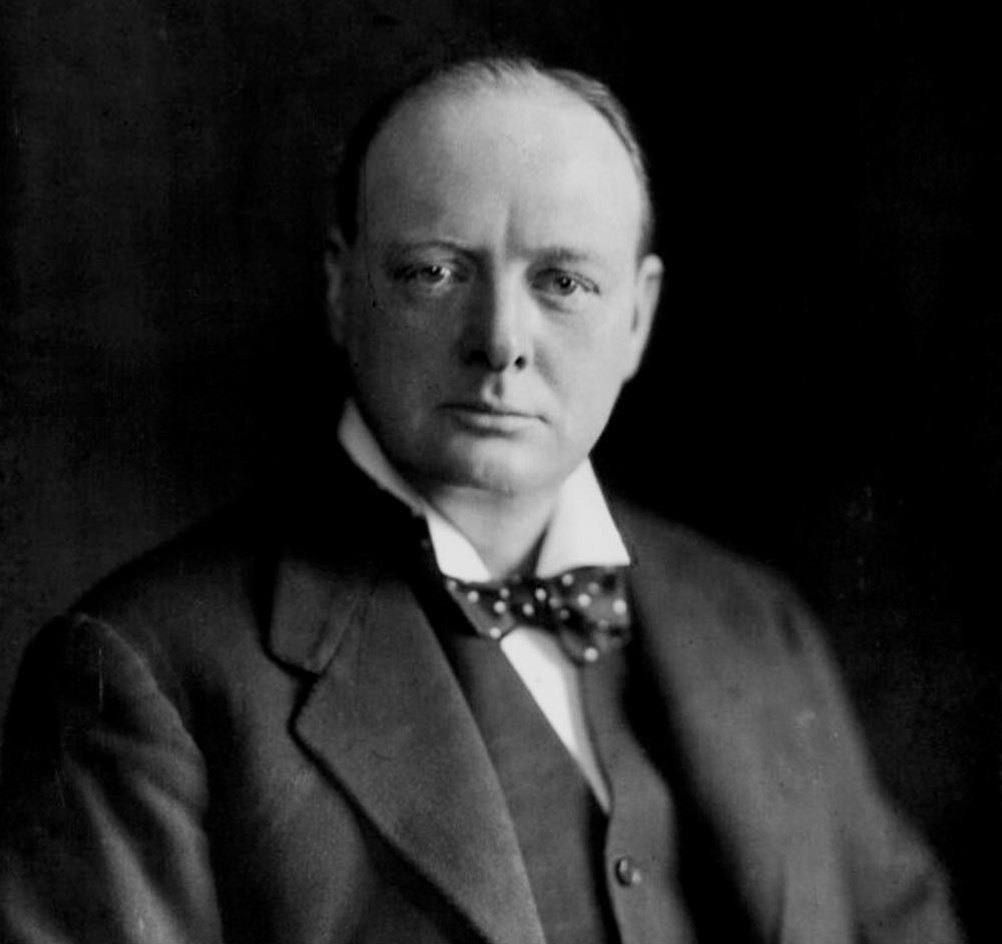 “…there is no reason at all why, in periods as remote from our own as we ourselves are from the Tudors, the graveyards in France of this Great War shall not remain an abiding and supreme memorial to the efforts and the glory of the British Army, and the sacrifices made in the great cause”.

Winston Churchill in the House of Commons, 1920.

NEXT - EQUALITY IN COMMEMORATION