Of the thousand or so Second World War casualties commemorated in Stonefall Cemetery in Harrogate, there is one that means a lot to local resident Nora Greaves who, in 1946, adopted the war grave of a Canadian Flight Engineer.

This week CWGC’s Public Engagement Coordinator for the North East, Elizabeth Smith, uncovers the story and discovers the connection the local community have with the cemetery. 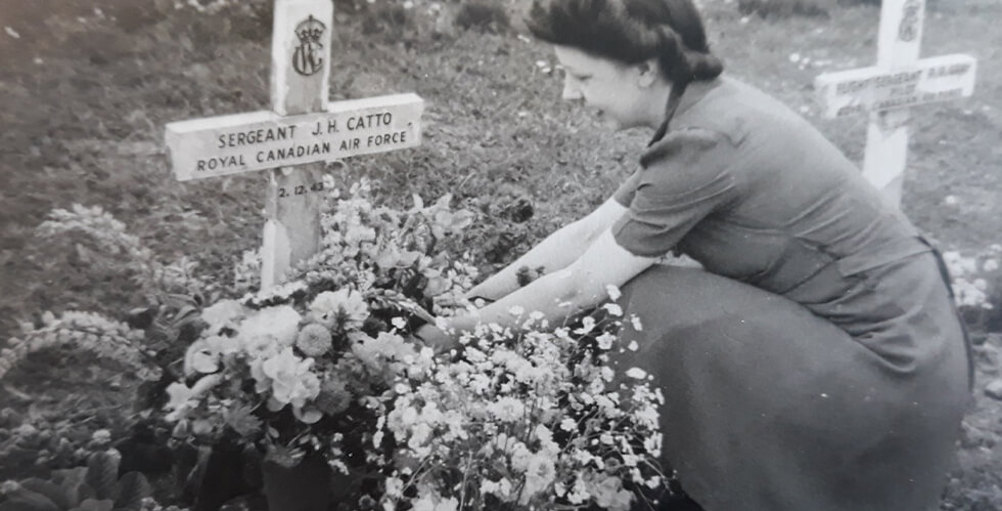 The vast majority of those commemorated at Stonefall Cemetery lie in the Air Force plot, buried thousands of miles from their homes. There are casualties from across the Commonwealth – Australia, New Zealand, Jamaica, Trinidad, Fiji and over six hundred from Canada.

The plot at Stonefall was one of the RAF Regional Cemeteries created partway through the Second World War at the request of the authorities in response to the heavy number of RAF deaths. At this time, there were many RAF airfields in Yorkshire and No 6 (RCAF) Bomber Group were stationed in the county too.

When the first body was interred at Stonefall in July 1943 no one could know how many more would follow. During 1944 there were often 30-40 burials each week, at times it was difficult to find the manpower to dig the graves.

With the RCAF stationed not far from the town and with many injured airmen being treated in the military wing of Harrogate General Hospital, it is not surprising that locals mixed with the Canadians and friendships were formed. Although burials at the Air Force plot appear not to have been reported on by the local press, the people of Harrogate must have been very aware of the mounting death toll and the debt owed to the Canadian airmen.

In the months following the end of the Second World War, the Harrogate Victory Branch of the British Legion, set up the Stonefall Adoption Committee. This group, working alongside the CWGC, encouraged local families to ‘adopt’ a Commonwealth war grave. The Committee worked hard to match the 666 Canadian airmen buried at Stonefall with a local family. Using next of kin details provided by the Commission, the Adoption Committee wrote to the Canadian families offering to lay a floral tribute at Christmas and at another date to be decided by the family.

Nora Greaves was living in Harrogate in 1946. Aged 24, she was working at the Post Office Savings Bank when she signed up to adopt a grave. She was asked to look after the war grave of Sergeant John Harrison Catto. 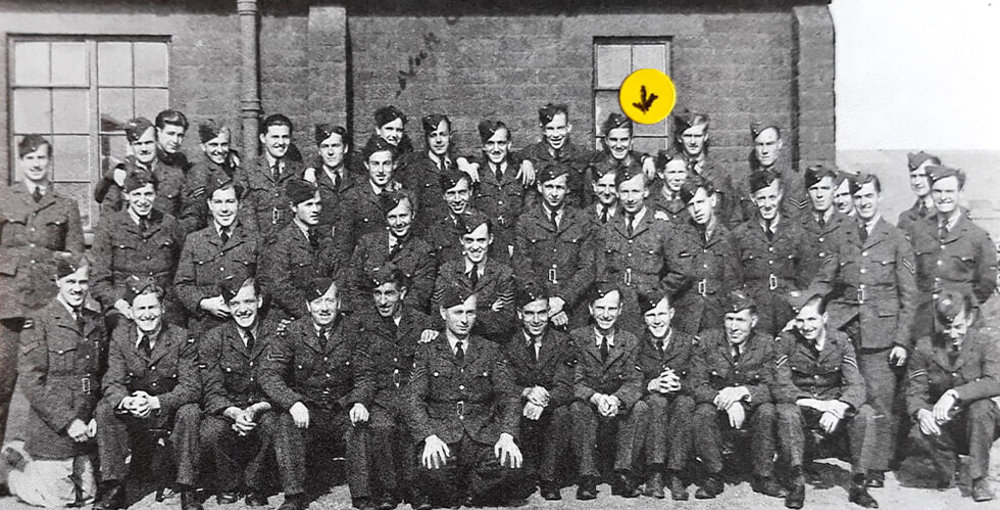 Catto alongside his comrades

Catto, a Canadian Flight Engineer, was on an exercise with his crew in a Halifax aircraft on the evening of December 2nd, 1943, when tragedy struck. They were practicing flying circuits and landings from Croft airfield, in North Yorkshire.

Visibility began to deteriorate, and a decision was made to suspend the exercises once all the planes were on the ground. Catto’s plane had twice overshot the runway when, on its third attempt to land, smoke from a passing train meant the pilot lost sight of the runway. The plane crashed and burst into flames. Five of the crew lost their lives and four of these (Catto, Gray, Foulston and Bellew) are buried at Stonefall. 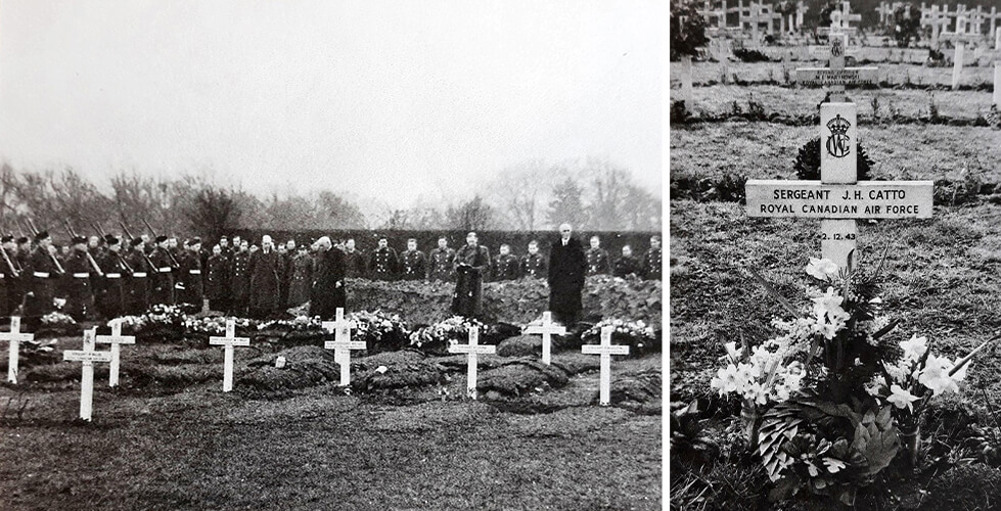 For around 40 years Nora looked after Catto’s grave – placing flowers there whenever she visited. Often on these visits Nora would be accompanied by her daughters. One of them, Susan Galloway remembers, ‘We had no car in those days. Stonefall Cemetery was one of the places we frequently visited because it made a nice circular walk from our house. I remember Stonefall as a place that always pulled at the heart strings and my mother would be very emotional when we visited.’

As well as visiting Catto’s grave, Nora also corresponded with his family in Canada just like many of the other Harrogate families who had adopted a war grave. As a child, Susan remembers the family receiving a parcel from Canada each Christmas. Inside there would be treats such as sweets, a small cake and a letter. Nora Greaves corresponded with Catto’s parents until the mid-1980s. It was around this time that Catto’s parents and Nora’s husband died and the forty-year correspondence came to an end. 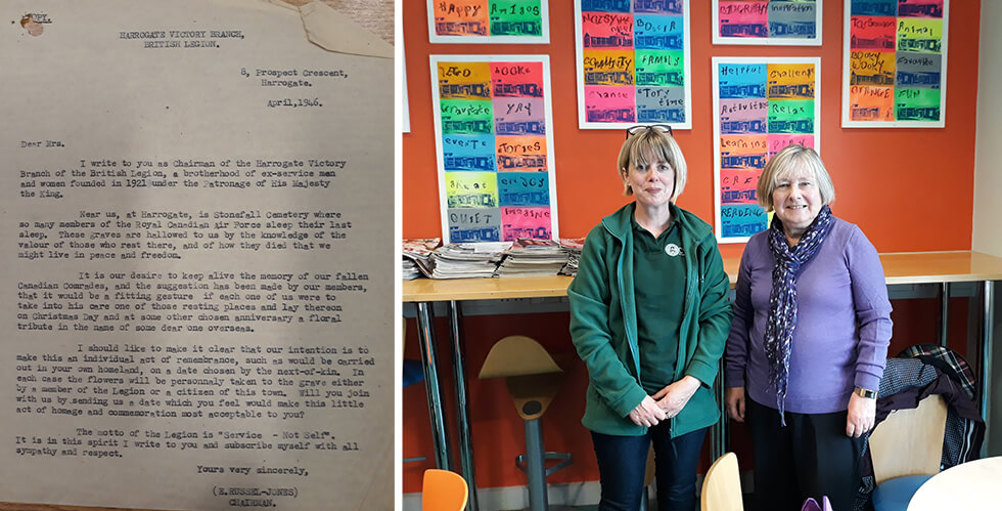 Letter from the adoption committee and Elizabeth meeting Susan Galloway

Over the passage of time, links between local people and the Canadian casualties have waned. However, there are some that are trying to rekindle that connection and make people aware of the high price the Canadian airmen paid during the war.

Two years ago, a member of the public organised a candlelit Christmas Remembrance service at the cemetery which has now become an annual event attended by local dignitaries and townspeople. For the first time, before the pandemic, I gave tours to the public and local primary schools (which saw almost 500 children taking part).

Now more than seventy-five years on since the end of the Second World War, it seems that for a growing number of people in Harrogate, ‘Lest we forget’ is as important today as it was back then.