Commemorating the poets of The Great War 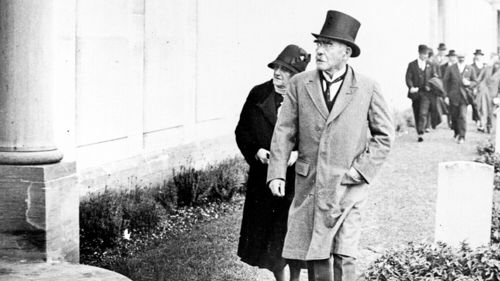 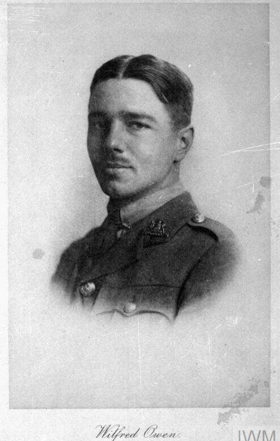 Perhaps the most famous of the First World War poems, Wilfred Owen’s Dulce et decorum est is a first-hand account of a gas attack on a group of British soldiers leaving the front line in search of rest and shelter.

Owen’s writing does not seek to glorify war, nor does it speak of the honour or bravery of the men he fought alongside, instead it is a bitter tale of soldiers “bent double, like old beggars under sacks, Knock-kneed, coughing like hags” who are hit by gas.

The emotive language hits hard. Not only to describe the terrifying effects of gas on a soldier who was not quick enough to don his gas mask, “The blood, come gargling from froth-corrupted lungs,” but also of the effects that life in the trenches had on the men who survived; the mental scars alongside the physical: “In all my dreams before my helpless sight, He plunges at me, guttering, choking, drowning.”

The poem ends with what Owen calls “The old lie: Dulce et decorum est, pro patria mori.” This line, from the Roman poet Horace, translates to ‘It is sweet and fitting to die for one’s country’. This, coming after such vivid descriptions of the horror of war, is said rather sarcastically, mocking the patriotic pomp that surrounded the calls for young men to join up and fight. It stands as a powerful rejoinder to poems such as Who’s for the game? which cajoled men into the fight and questioned the courage of those who refused. 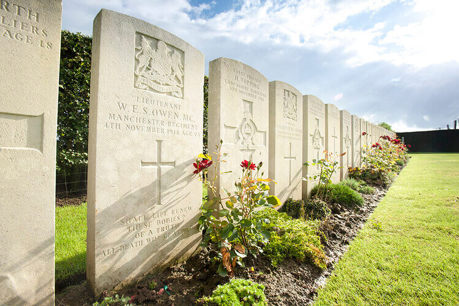 Owen enlisted in October 1915 and was commissioned as a second lieutenant of the Manchester Regiment. Having been caught in the blast of a trench mortar, Owen suffered from ‘shell shock’ and was sent to convalesce at Craiglockhart War Hospital where he met Siegfried Sassoon – another famous poet of the First World War, who’s mentorship is said to have helped Owen find his poetic voice. Indeed, the poems he wrote following this meeting became more visceral and realistic.

After his return to the trenches in 1918, Owen was awarded the Military Cross for his part in an attack on a number of enemy strongpoints near the village of Joncourt. In November 1918, just a week before the signing of the Armistice, Owen was killed during the crossing of the Sambre-Oise canal.

He is buried in Ors Communal Cemetery, in the Nord Department of France. His headstone, one of 63 commemorated there, bears an inscription from The End, one of his other poems: ‘“Shall life renew these bodies? Of a truth all death will he annul" W.O.’ 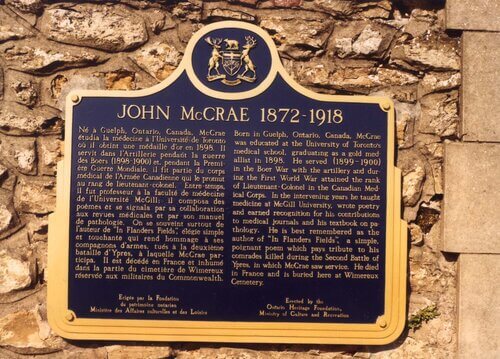 Another of the most enduring poems of the First World War was written by John McCrae, a Canadian medical officer in the Canadian Expeditionary Force.

In Flanders Fields is McCrae’s most well-known piece. Written from the point of view of the dead soldiers in Flanders Fields – the area of Belgium and northern-France some of the fiercest fighting of the war took place.

McCrae wrote the poem shortly after a close friend of his was killed in battle and the poem speaks with his voice, as well as the countless voices of the other fallen soldiers: “We lived, felt dawn, saw sunset glow, Loved and were loved, and now we lie, In Flanders fields.”

Despite this, In Flanders Fields is not a denouncement of the war, nor is it a melancholic requiem for the men who fought and died. Instead, the poem was used as a motivational tool, a stirring call to arms to ensure that the live that had been lost had not been so in vain: “To you from failing hands we throw, The torch; be yours to hold it high.”

McCrae would later die of pneumonia and meningitis at a hospital in Wimereux, and is buried in Wimereux Communal Cemetery. His legacy lives on, not only through his poetry, but through the use of the poppy in remembering the war dead, through no small part thanks to his words: “In Flanders fields the poppies blow, Between the crosses, row on row,”.

There are few more iconic lines of war poetry than the opening lines of Rupert Brooke’s The Soldier: “If I should die, think only this of me: That there's some corner of a foreign field, That is for ever England.”

These stirring words – that have been quoted, referenced and paraphrased by everyone from Pink Floyd to Blackadder - open the fifth poem in Brooke’s collection 1914 and Other Poems. The Solider is written in the form of a sonnet – a style of poetry that is often related to romance – and is indeed a romantic, idealised ode to England. 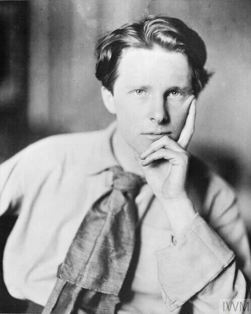 Written in 1914, The Soldier portrays war – and even dying at war - in a positive light, a direct inverse to poems like Dulce et decorum est, which was written later in the war after the full horrors of trench warfare had a become apparent.

Brooke died from an infection in April 1915 while sailing on a French hospital ship en-route to the landings at Gallipoli. Brooke is one of the poets immortalised on Poets Corner in Westminster Abbey alongside other war poets like of Wilfred Owen and Siegfried Sassoon.

He was buried in an isolated grave on the Greek island of Skyros, in a small corner of a foreign field, that remains forever England. 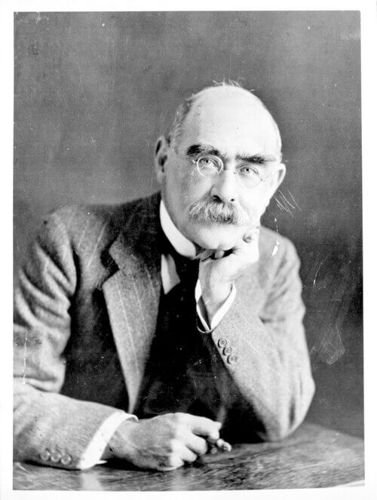 Rudyard Kipling did not fight during the First World War, but was a keen supporter of the war, convinced that it was the duty of the British Army to stand and fight against Germany and what he saw as their inhuman, barbaric actions.

He wrote pamphlets and poetry in support of the war effort, essentially writing propaganda in support of the war and to encourage men to enlist and fight. He was one of the fifty-three poets and writers who signed the ‘Authors’ Declaration’ which stated that “Great Britain could not have refused to join the war without dishonour.”

While he did not himself fight in the war, Kipling was not without his own personal loss during the conflict. His son, John Kipling, fought and died at the Battle of Loos in 1915. John’s body was not identified after the war, and was buried as an unknown soldier, with John’s name inscribed on the Loos Memorial. In 1992, nearly 60 years after his father’s death, John’s body was identified at St. Mary’s A.D.S. Cemetery where he is now commemorated alongside his war comrades.

One of Rudyard Kipling’s most famous war time poems was written in 1916. My Boy Jack was written following the battle of Jutland, ostensibly about a generic sailor, Jack, who would not make it home from the war, and who had been lost to “that wind blowing, and that tide.”

It is impossible, however, not to believe that Kipling’s own personal grief at the loss of his son informed the poem’s form. The first line, a quotation from a nameless parent asking “Have you news of my boy Jack?” must be, on some level at least, Kipling’s own yearning for news of his son.

Following the war, Kipling worked closely with the then Imperial War Graves Commission. Kipling is responsible for many of the words that mark our cemeteries and memorials today. Our Stones of Remembrance bear his words ‘Their name liveth for evermore’ and the headstones of unidentified servicemen bear ‘Known unto God’. It is impossible not to think that, when he wrote these words, his mind was not full of the memories of his son, and the grief of his loss.

Have you heard of the WAAC? The War Artists Advisory Committee was set up to help document the war through art. To draw and paint the war one had to see it: some 28 artists were given overseas commissions by the WAAC, and of these, three would die while serving.