Today there are no Commonwealth War Graves in Finland, but that doesn’t mean links with the First World War don’t exist. Sanna Joutsijoki, one of CWGC’s Historians, uncovers the story of a lighthouse keeper who helped save the lives of seamen aboard a sinking Royal Navy destroyer and how he and his wife looked after the graves of those who lost their lives.

Finland became part of the Russian Empire as an autonomous Grand Duchy as a result of the Finnish War (1808-1809). When the First World War broke out, the Finnish were exempt from conscription, with only a small number of officers and volunteers serving with the Russian Imperial Army. Nevertheless, the war had an impact on the daily lives of the Finnish civilians.

For most of the war, Finland did not engage in active warfare but in 1917 the situation changed. The February and October Revolutions altered the political landscape in Russia and this had profound consequences in Finland. On 6 December 1917 Finland declared independence, which was soon followed by a civil war in 1918.

The Royal Navy Arrives in Finland

The Royal Navy, and later the Royal Air Force, were deployed in the Baltic Sea to assist the newly formed Baltic States and Finland. In January 1919, Rear Admiral Sir Walter Cowan was appointed as Senior Naval Officer for the Baltic. Six months later, in early June, he arrived at Koivisto (also Björkö, now Primorsk) where he established a base for the British forces. An observation base was set up at the lighthouse of Seivästö (also Styrsudd, now Ozerki), some 30 kilometres south-east of Koivisto which offered an excellent view to Cronstadt, where the Red Baltic Fleet was based. 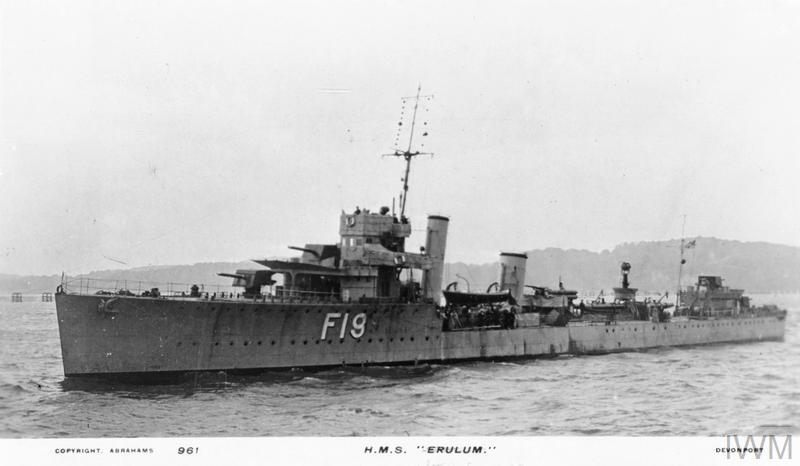 On 3 September 1919 H.M.S. Verulam, a Royal Navy destroyer, was on patrol duty in the Gulf of Finland. By late evening the crew had already navigated for hours, in the dark, between Saarenpää in Koivisto and Seivästö. A few days earlier the British had laid a minefield to protect their naval and air base in Koivisto, which made it important to stay on the right route. 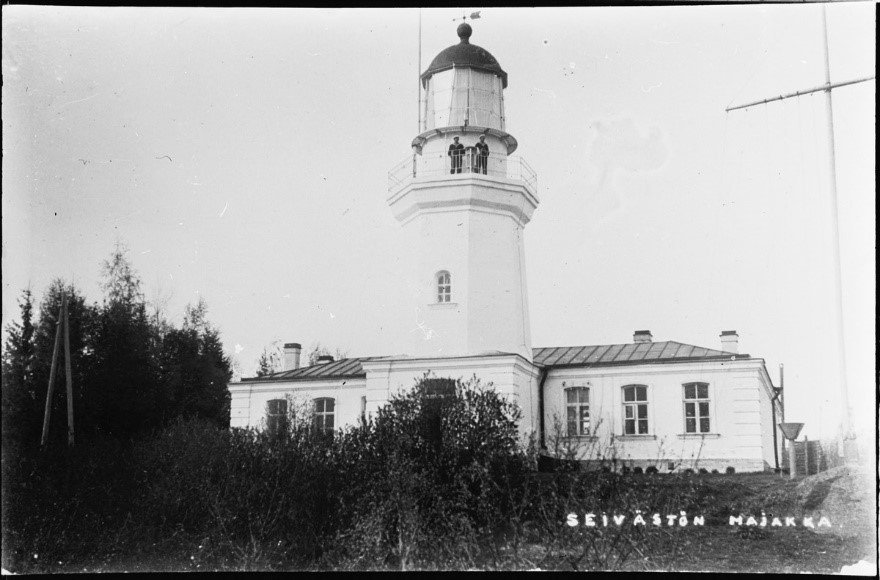 By September 1919 the lighthouse keeper, Emil Virkki and the staff at the lighthouse of Seivästö, had become used to the presence of the British. He had been appointed to this post in July 1918 and, being a seafarer himself, he was keen to keep an eye on the British when they were at sea. In the late evening of 3 September, he and his wife Lyydia had gone to sleep but were soon woken up by an explosion. He knew, of course, that the British had recently laid mines and it didn’t take him long to realise that a vessel had hit one.

After patrolling for several hours on its fixed route, around 11pm, H.M.S. Verulam came again to the turning point near the Seivästö lighthouse, where it hit a mine. After that everything happened very quickly. The vessel began to sink. Cries for help reached the shoreline of Seivästö where Emil Virkki, the lighthouse staff, and other locals, took to their fishing boats and rushed to help.

The conditions for the rescue operation were far from ideal. Darkness and the leaked oil made it difficult to reach those almost underwater. Two boats worked until the early hours and brought wounded to Seivästö where Lyydia Virkki with other locals took care of them as best they could, joined later by a British medical team from Koivisto.

Between the local boats, H.M.S. Verulam’s rescue boats and other navy vessels, most of the crew were saved that night, however a total of 16 officers and men were lost in this tragic accident. Eight of them have the Baltic Sea as their final resting place, while the other eight men were buried in the vicinity of the lighthouse in Seivästö. Only three of those who were buried, could be identified. They were Sub-Lieutenant Owen Philip Powell, Engineer Lieutenant Joseph House DSC and Stoker 1st Class John Elliott. Those who were lost to the sea are commemorated by name on CWGC’s naval memorials in Chatham and Plymouth in the UK.

Later in the year, in December 1919, the British left their base in Finland. The following year the Baltic States signed peace treaties with Soviet Russia, followed by Finland in October 1920. The Treaty of Tartu confirmed the border between Finland and Soviet Russia. Seivästö remained part of Finland. A small cemetery was created for the fallen of the Royal Navy. Emil and Lyydia Virkki took on the care of these graves and the cemetery for the next twenty years.

The cemetery was regularly visited by the representatives of the British Embassy to Finland but also by visitors to the Carelian Isthmus. Sir Ernest Rennie, British Ambassador to Finland, based in Helsinki, visited Styrsudd Point Cemetery as the cemetery in Seivästö was called in the IWGC’s records, in July 1922. The headstones had recently been erected by a Finnish contractor and he was keen to see the result. He reported back that: “… It will, I am sure, be of interest to the relatives of those who lie here to know that the cemetery is maintained in good order. … The graves are well kept and the cemetery itself, which is enclosed by a neat, white-painted, wooden fence, is brightened with flowers. It was particularly touching to note the evident piety and loving care with which Lighthousekeeper Virkki and his wife tended the resting places of two officers and six seaman belonging to His Majesty’s Navy.”

One of these men was Sub-Lieutenant Owen Philip Powell, from London, who lost his life when the destroyer sank. He was buried in Seivästö. Later his parents, Owen Markham Powell and Harriet Powell, chose the personal inscription for his headstone of: “DIED IN HIS COUNTRY’S SERVICE IN THE BEAUTY AND PROMISE OF HIS YOUTH”. They visited the grave of their son and were touched by the care shown to the war graves by Emil and Lyydia Virkki. They stayed in contact and invited the couple to visit them in England and this is also said to have taken place.

Emil Virkki worked for 21 years as lighthouse keeper in Seivästö. The last documents in the Commission Archive relating to this cemetery date back to 1938 when the repair works of the wooden fence and future horticultural works were discussed. The last note in the logbook of the lighthouse dates from 2 December 1939.

On 30 November 1939 the war that became known as the Winter War between Finland and Soviet Union began. People living in the Carelian Isthmus were evacuated to other locations in Finland, including the lighthouse staff who left Seivästö. Three lighthouses situated in the Gulf of Finland were decommissioned by the order of the Finnish Army, including the one in Seivästö. Emil and Lyydia Virkki never returned to Seivästö.

In March 1940 the Moscow Peace Treaty ended the war. The terms included the cession of the Carelian Isthmus to Soviet Union.

After the Second World War, the IWGC was not able to visit the graves in Seivästö for a long time. In cases in which a cemetery could not be visited, it was chosen to commemorate the casualties by name on alternative memorials in other locations so that their place of commemoration would still be accessible. The servicemen who lost their lives while serving in the Gulf of Finland and who were buried in Seivästö were first commemorated by name on Brookwood (Russia) Memorial in the UK. More recently, their point of commemoration was changed to Archangel Memorial in Russia, located within Archangel Allied Cemetery.

For more than 100 years individuals all over the world have supported the Commission’s work of commemorating the servicemen and women who died during the First and Second World Wars in myriad of ways. This is just one of their stories. 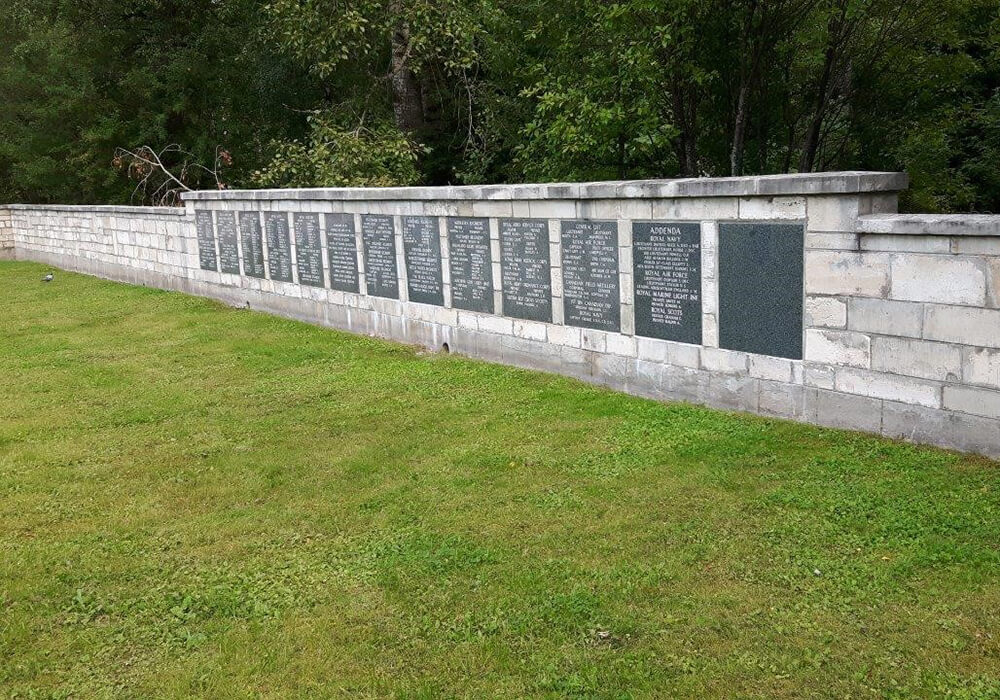