For many people, the mention of war poetry immediately conjures up the First World War, and perhaps a secondary school English lesson or two: rat-infested trenches, ‘Gas! GAS! Quick, boys!’ The Second World War had poets too, of course, and for this year’s World Poetry Day CWGC’s Historian, Lynelle Howson, shares one of her favourites. 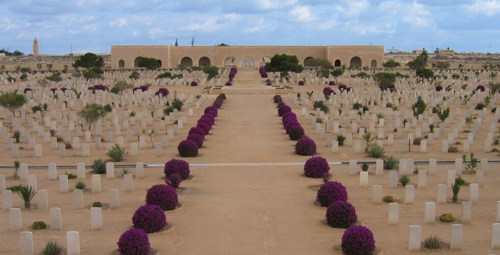 From July to September 1942 Australian war correspondent Kenneth Slessor was somewhere on this map – west of Alexandria, east of El Alamein, and near the shore of the Mediterranean Sea. He was with the 9th Australian Division, who in July 1942 fought hard for key positions west of El Alamein, losing nearly a whole battalion, killed or captured, on 27 July.

Slessor had been the editor of a newspaper with Australia-wide circulation, Smith’s Weekly, before his appointment as an official war correspondent in 1940 when he was 39. His first volume of poetry had been published in 1924. But it was his poem “Five Bells” that would become the most famous.

Softly and humbly to the Gulf of Arabs

The convoys of dead sailors come;

At night they sway and wander in the waters far under,

But morning rolls them in the foam.

Between the sob and clubbing of the gunfire

Someone, it seems, has time for this,

To pluck them from the shallows and bury them in burrows

And tread the sand upon their nakedness;

And each cross, the driven stake of tidewood,

Bears the last signature of men,

Written with such perplexity, with such bewildered pity,

The words choke as they begin –

Wavers and fades, the purple drips,

The breath of wet season has washed their inscriptions

As blue as drowned men's lips,

Dead seamen, gone in search of the same landfall,

Whether as enemies they fought,

Or fought with us, or neither; the sand joins them together,

Enlisted on the other front. 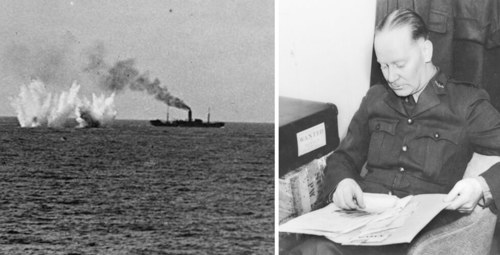 Despite being surrounded by the men and machines of mobile desert warfare, something drew his poet’s eye to the shore and the blue horizon beyond, where the men and ships of the Commonwealth fought to keep their land forces supplied and the vital island of Malta in Allied hands.

Convoys fought to cross the eastern Mediterranean from Alexandria and from the Atlantic via Gibraltar in the west, against the Italian navy, German U-boats and airplanes. Losses were so severe in 1942 that British command had to stop convoys from Alexandria to Malta for four months. 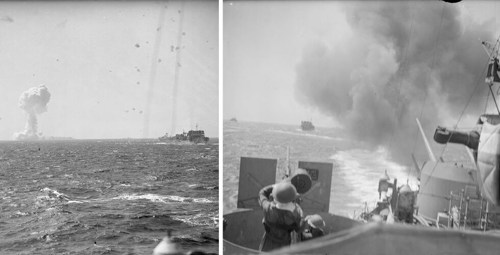 On the horizon, HMS Airedale after a direct hit from enemy bombers, © IWM A 10473 & Under attack in the eastern Med, HMS Euryalus blows up engages enemy aircraft, © IWM A 10477

The Allied victory at the Second Battle of Alamein in October-November 1942 and other Allied successes in North Africa brought more of the Mediterranean inside the protective cover of Allied aircraft. The Italian surrender in September 1943 removed their navy from the fight, but Commonwealth merchant and naval servicemen would still be lost in the Mediterranean until the end of 1944.

Those with no grave but the sea – and those who received a ‘beach burial’ but could not identified – are remembered by name on the CWGC’s naval memorials in the UK at Chatham, Plymouth and Portsmouth and, for the merchant mariners, our Tower Hill Memorial in London. 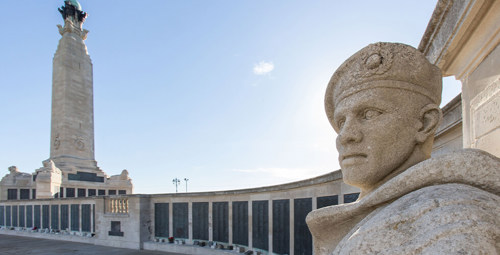 But what of bodies like Slessor’s seaman, buried by Commonwealth soldiers on an Egyptian beach? In time, an Army Graves Registration unit would register his grave, making note of anything that might help identify the man – at least his branch of service from his uniform, if possible; perhaps the date he was found might be on a makeshift grave marker. Later, when the war moved far enough away, the scattered graves of shore and battlefield would be moved into temporary cemeteries or moved directly into the sector’s permanent cemetery once it was selected. 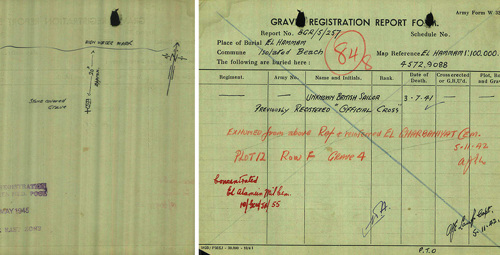 Sketch map for a stone covered grave, 20 feet above the high water mark on a beach about 15 miles east of El Alamein War Cemetery & Grave registration report for the grave © CWGC archive

The War Graves Commission’s principle architect for North Africa, Sir Hubert Worthington, visited the former battlefields of the Western Desert in 1943 to recommend which cemeteries be made permanent. The location of today’s El Alamein War Cemetery and Memorial was chosen then, and graves were moved to join those already there. In 1946 the War Office handed the site to the Commission for architecture and horticulture. 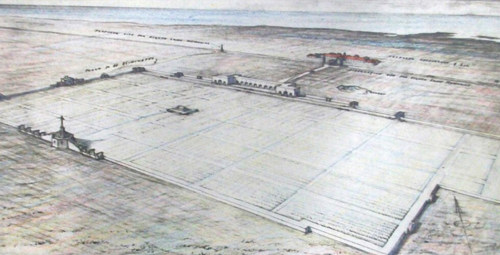 Today the CWGC cares for the graves of over 7,000 Commonwealth servicemen in El Alamein War Cemetery. Most are soldiers and airmen of the Western Desert campaigns, but alongside them are 85 men of the Royal Navy and Merchant Navy whose names are unknown. 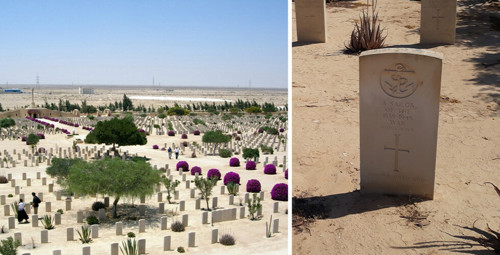 Where Slessor meditated upon a ‘ghostly pencil’ wavering and fading, causing the unknown seaman to become completely erased, the work of the men of Army Graves Registration and the War Graves Commission changed that ending - providing a permanent resting place in a beautiful desert cemetery, bright with bougainvillea, where ‘their name liveth for evermore.’