The story of the Unknown Warrior

As plans were being drawn up for the unveiling of Lutyens’ Cenotaph on 11 November 1920, a proposal that the body of an unknown soldier be returned to England for burial to represent all those who had been lost in the Great War, gathered momentum. Peter Francis, CWGC’s Media and PR Executive, uncovers the story of the Unknown Warrior at Westminster Abbey.

Read on to discover the story of the Unknown Soldier. 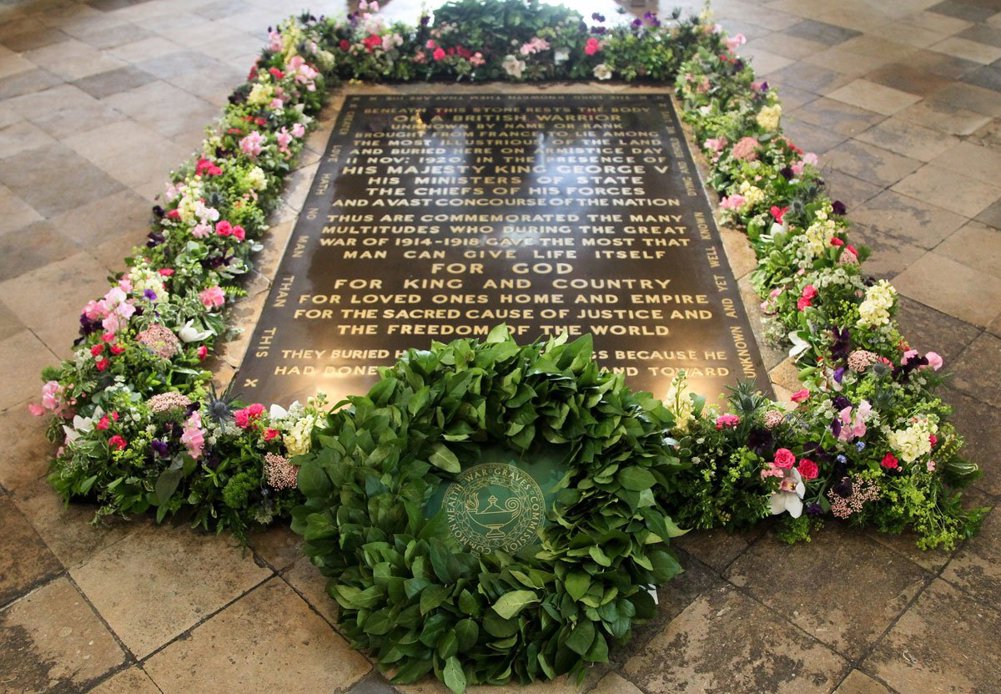 While serving on the Western Front in 1916 the Reverend David Railton MC “had just laid to rest the mortal remains of a comrade” when, returning to his billet near Armentieres, he came across a solitary grave. “At the head of the grave there stood a rough cross of white wood.

On the cross was written in deep black-pencilled letters, "An Unknown British Soldier" and in brackets beneath, "of the Black Watch". How that grave caused me to think. Later on, I nearly wrote to Sir Douglas Haig to ask if the body of an "unknown" comrade might be sent home...” and so the idea was born.

In 1920 David wrote to the Dean of Westminster Abbey, the Rt. Reverend Herbert Ryle, resurrecting his idea and suggesting the burial should be in the Abbey – after which things began to move quickly. The Dean contacted the Prime Minister and King George V gave his consent on 4 October.

Brigadier-General Wyatt, the officer in charge of all British forces on the continent and later a CWGC Commissioner, was given the task of realising the concept. He gave instructions for the exhumation of four unknown soldiers, one from each of the areas of the Somme, Aisne, Arras and Ypres.

On 7 November four groups commenced their task, no group knowing the whereabouts of the other. Once selected, the remains were transported to the Military Headquarters at St Pol, where they were examined to confirm that no name, regiment, or other means of identification could be established.

Each body was covered with a Union Jack and placed on a stretcher. At midnight, Wyatt entered the room and randomly selected one of the bodies. The remaining three were removed.

The following day the body was taken to Boulogne where it was placed in a coffin made of English oak from a tree that had stood in the grounds of Hampton Court Palace. The body was transferred to HMS Verdun for the trip to Dover. For the final leg of the journey, from Dover to London, the Unknown Warrior was placed on board a train. During the journey, crowds gathered at every station...

The train thundered through the dark, wet, moonless night. At the platforms by which it rushed could be seen groups of women watching and silent, many dressed in deep mourning. Many an upper window was open and against the golden square of light was silhouetted clear cut and black the head and shoulders of some faithful watcher - from the Daily Mail 11 November 1920. 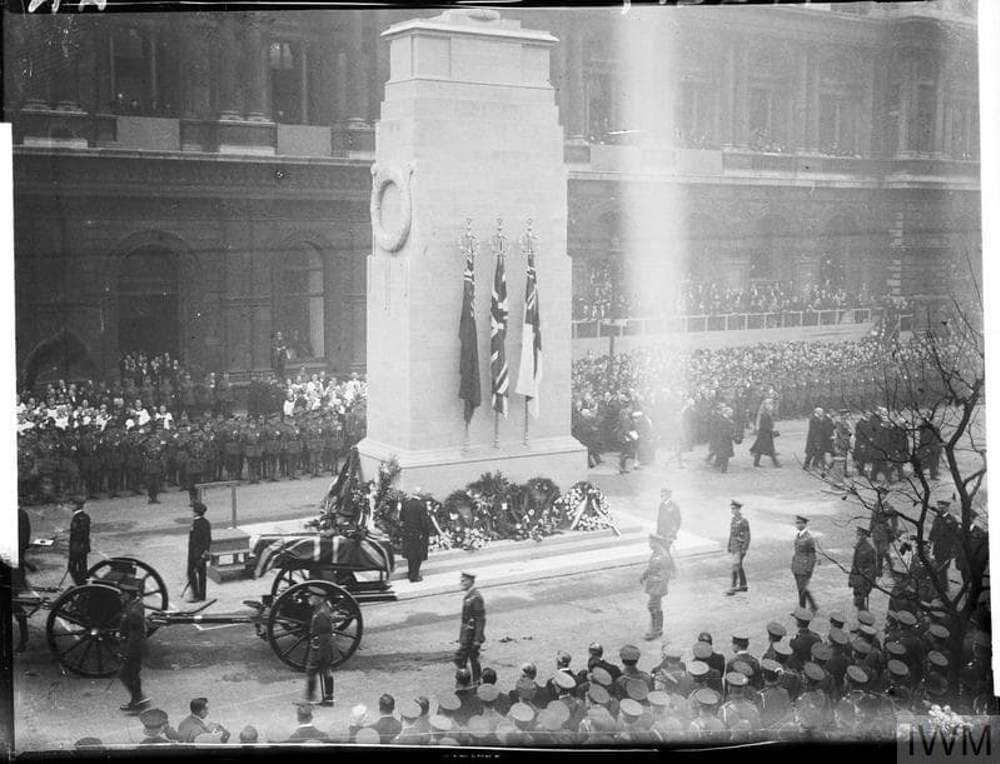 Crowds began to arrive early on the morning of 11th November 1920 and were soon six or seven deep. At 10.40 the King took up his position facing the Cenotaph, which was covered in two huge Union Flags. On the east side of the Cenotaph, the gun carriage carrying the Unknown Warrior came to rest in front of the King. The King saluted, and placed a wreath of red roses and bay leaves onto the coffin, with a hand-written card:

In proud memory of those warriors who died unknown in the Great War.
Unknown, and yet well known, as dying and behold they lived.
George R.I

At eleven o'clock as Big Ben began to chime, the King faced the Cenotaph and, by a touch on a button, released the flags veiling the monument. As the sound died away, everyone fell silent for two minutes. After the Last Post sounded, the official party formed up behind the coffin for the solemn journey to Westminster Abbey.

At the Abbey, a bearer party from the Coldstream Guards carried the coffin through two lines made up of 100 holders of the Victoria Cross. Most of the congregation was composed of widows and mothers who had lost sons and as the Dean began to conduct the service, people began to sob.

Immediately after, the grave was covered with the Actors Pall and the Union Flag, and four sentries were mounted at each corner of the grave.  Members of the public queued for hours to file past. When the grave was closed on 18 November an estimated 1.2 Million people had visited the Abbey. 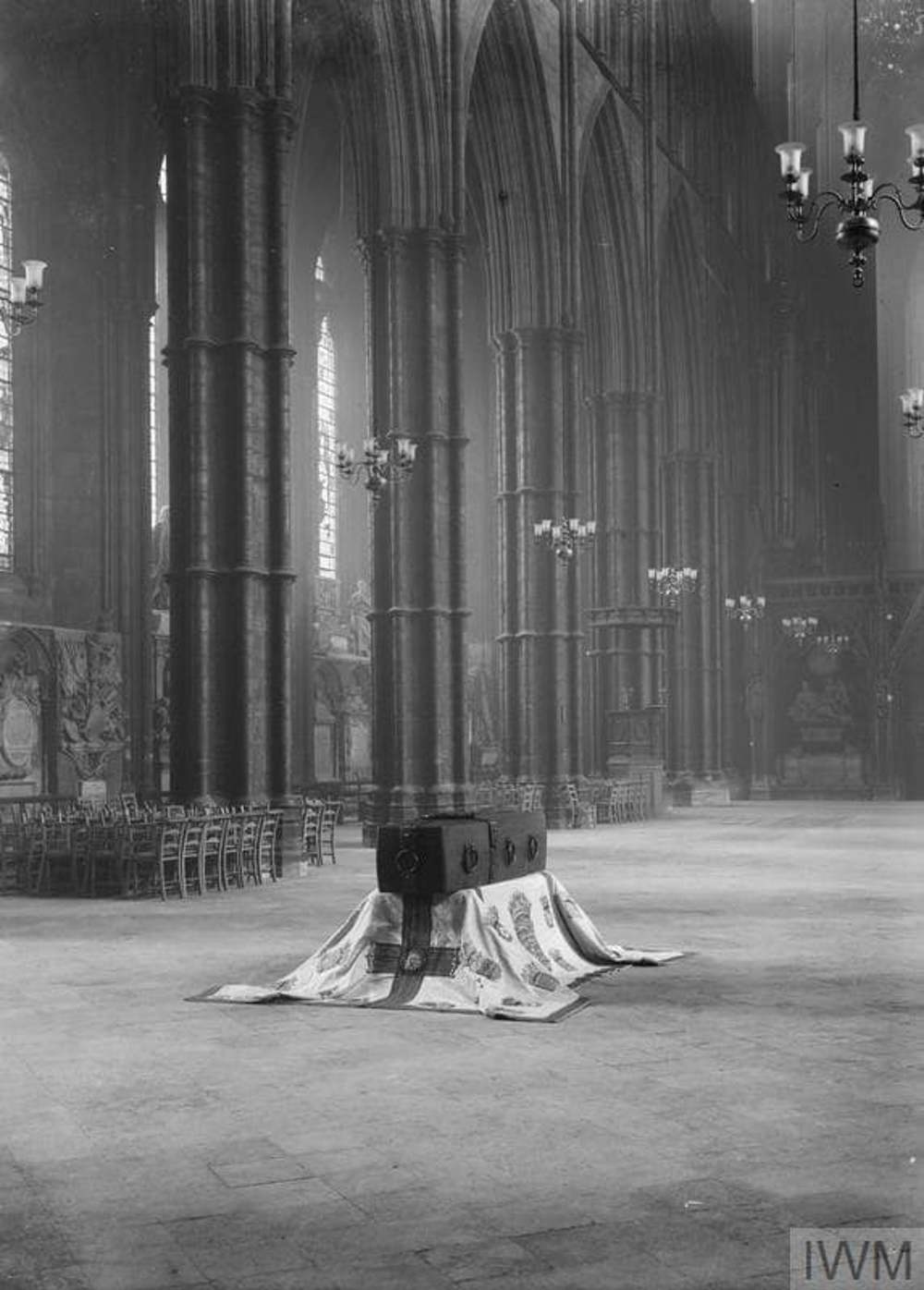 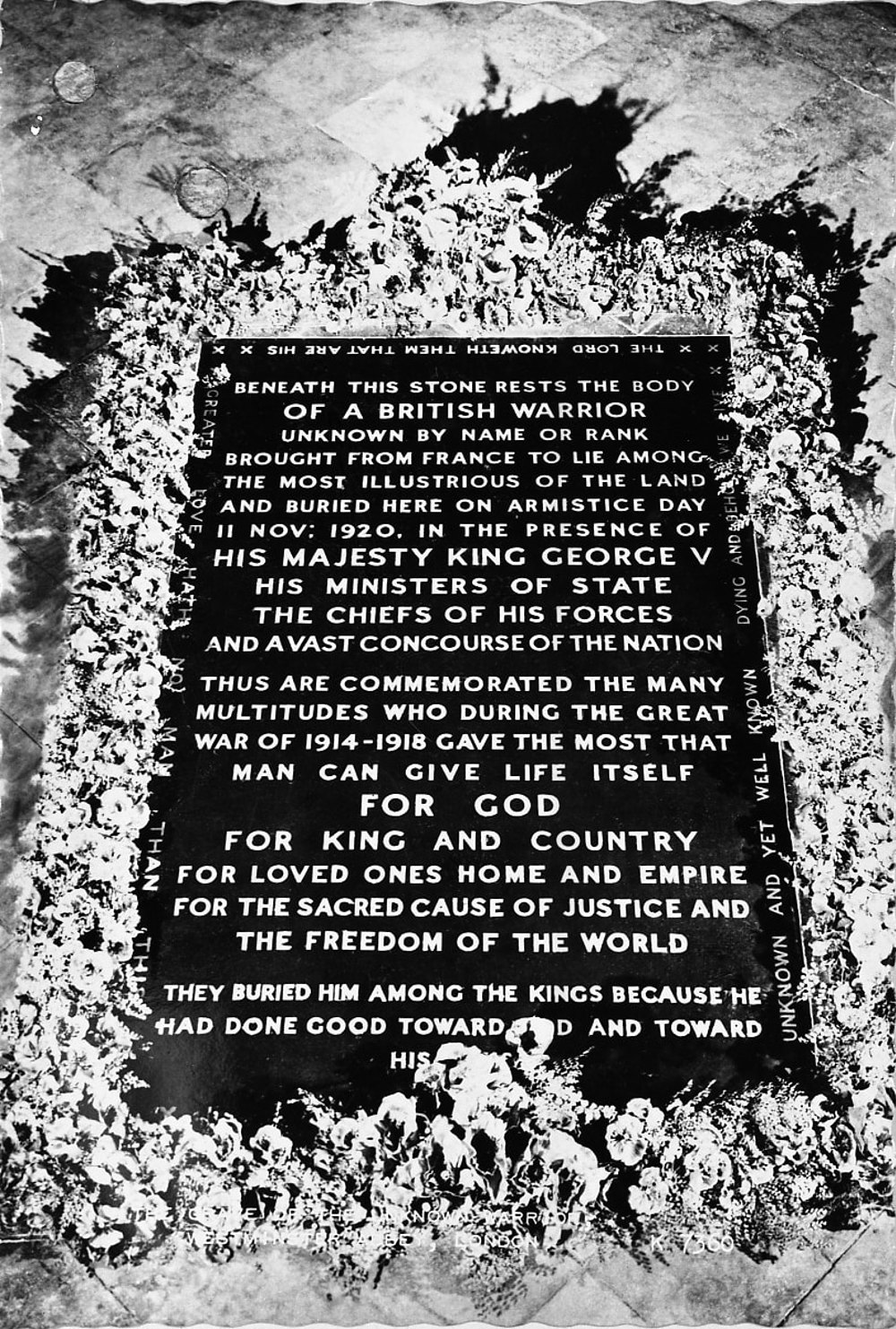 The grave was later covered with a slab of black Belgian marble. Part of the inscription reads:

The Tomb of the Unknown Soldier, Westminster Abbey Today

Westminster Abbey remains the final resting place of the unknown soldier and is the most visited war grave in the world. It can be found at the West end of the nave.

Tomb of the Unknown Warrior Around the World

Since 1920 Australia, Canada, South Africa and New Zealand have all requested the remains of one of their soldiers from the Great War to be commemorated in a similar fashion.

Although responsibility for the tomb does not lie with the CWGC, we are responsible for the remains buried in each of the tombs in the Commonwealth countries throughout the world.

The Unknown Warrior Identity - Who is the Unknown Soldier?

Over the years many people have speculated as to the identity of the Unknown Warrior, and there remains much debate over the actual process. It all adds to the mystery and intrigue but isn’t really important. We will never know who he is and that is the point. He is all of us.

Is There a Body in the Grave of The Unknown Soldier?

Yes, the body was chosen from unknown British servicemen exhumed from four battle areas, the Aisne, the Somme, Arras and Ypres.

What does Remembrance mean to you?