Why are there American World War Soldiers Buried in Surrey?

The Brookwood American Military Cemetery is one of eight permanent overseas American Cemeteries established after the First World War, under the guardianship of the American Battle Monuments Commission (ABMC). Gail Anderson, from the ABMC, tells the story of the American cemetery nestled in the middle of the largest Commonwealth War Graves Cemetery in Great Britain. 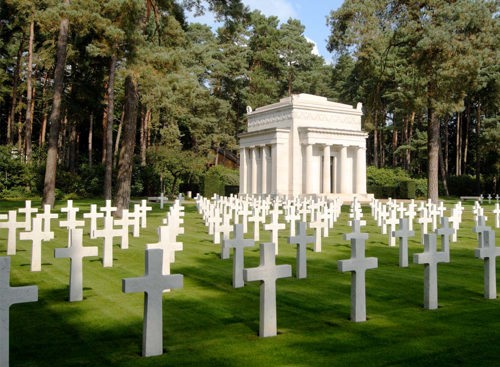 The American Battle Monuments Commission was created by an act of congress in 1923. It was established as a direct result of the First World War and the nation's desire to permanently commemorate the action of the country’s soldiers. It is responsible for commemorating the services and achievements of the United States Armed Forces in the places they have served since 6 April 1917.

General Pershing who commanded the American Expeditionary Forces (AEF) during the First World War was the first chairman of the commission. Pershing’s enduring bond with the men of the AEF had been sealed during the bloody fighting in the final months of the war.

By the time war ended in November 1918, fatalities from the American forces were spread across thousands of locations in multiple countries.

In March 1919 the American War department mailed 74,770 ballots to the next-of-kin of the causalities, that gave each family the right to decide whether the body of their loved one would remain in an American cemetery abroad, with their comrades in arms, or be returned to the family. By the time the balloting ended in 1921 61 percent had chosen to bring the remains of their loved ones home. 29,265 bodies were to remain in Europe.

U.S. policy of its war dead contrasted sharply with that of Great Britain and the Commonwealth, who instead opted not to repatriate the fallen.

It was decided that the United States would maintain comparatively few cemeteries abroad, but generally with higher numbers in them than CWGC sites.

The War Department had already established important guidelines for the permanent cemeteries. No distinction of rank was to be made in arranging the graves; officers and enlisted men would rest side by side. All headstones were to be uniform and contain the same information about every buried soldier.

The ABMC then determined that non-sectarian chapels would be erected in each of the eight military cemeteries, and Latin crosses or Stars of David made of pristine white Italian marble would mark the graves of each soldier buried.

Over the course of the war, more than two million Americans were sent to Europe. Of this number, approximately half initially landed in the British Isles. In most cases, American troops only stayed here for a few days on their way to the battlefields in France and Belgium.

A small number of Americans were located in the British Isles for extended periods during the war. Some were trained at British bases in military aviation or armoured warfare. American doctors and nurses were located at both AEF and Red Cross hospitals in Great Britain. They cared for American soldiers, sailors, and civilians who were wounded in combat, or suffered from disease.

During the First World War, more than 2,000 Americans died in the British Isles. The main cause of death was pneumonia and influenza. Others lost their lives at sea, through enemy action or maritime disasters. Some were killed in training accidents on British military posts or were wounded in Belgium and evacuated to England before succumbing to their injuries.

The Brookwood American Military Cemetery is the final resting place of 468 war dead of the First World War, including 41 unknown servicemen, who were all brought here from temporary cemeteries across England, Scotland and Ireland. Another 564 soldiers and sailors are commemorated on the walls inside the chapel, who were lost at sea in the surrounding waters of the UK, most of whom were United States Navy and Coast Guard.

During the Second World War, Brookwood American cemetery was the only permanent American cemetery in Europe to remain open and in continuous operation. The remaining cemeteries located in France and Belgium were evacuated by American commission personnel in 1940, prior to the German invasion and occupation of Western Europe.

After the United States entered the Second World War, Brookwood cemetery was used for the burials of members of the American armed forces who died in the United Kingdom. 3,600 remains were buried in plots surrounding the First World War American section between April 1942 and August 1944. From September 1944 the American service personnel then started to be laid to rest at a temporary cemetery in Cambridge. This continued for the remainder of the war.

In 1948 the Second World War burials at Brookwood, were exhumed and transported to the Cambridge cemetery for re-interment or sent home to the United States at the request of the next-of-kin.

Today the ABMC administers, operates and maintains 26 permanent American cemeteries and 30 separate memorials, monuments and markers, which are located in 16 foreign countries. It also maintains three memorials in the United States. There are 124,000 American war dead interred in these cemeteries, and more than 94,000 American servicemen and women who were missing in action, lost, or buried at sea are commemorated by name on stone tablets in ABMC cemeteries and memorials.