From May 2021, the CWGC La Ferte-Sous-Jouarre Memorial to the missing will be closed to the public while we undertake a program of renovation work lasting approximately nine months.

The war memorial commemorates almost 3,800 service personnel who died during the First World War between the end of August and early October 1914 and have no known grave. While the memorial is closed, visitors can see a register of all those commemorated at the town hall.

What work is being undertaken?

Only around two thirds of the La Ferte-Sous-Jouarre Memorial’s structure appears above ground. Underneath is a deep set of chambers and reinforced walls that underpin the building above.

Over time water and gravel from the nearby river have eroded these foundations. If left unchecked, it could put the memorial at risk of serious damage. 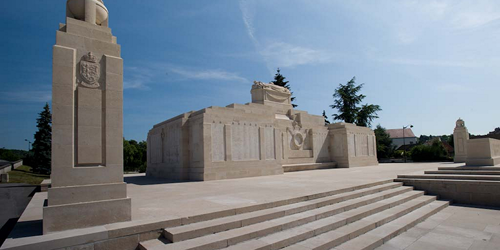 During this nine-month restoration we will be cleaning away and repairing some of the minor damage that has occurred inside the memorial in recent years.

This includes making it easier to access some of the hard to reach spaces underground, and improving the drainage system that draws water away from the memorial’s base.

Above the surface, we are repointing and repairing the paved surfaces, carefully fixing any stone which we can, and only ever replacing what has been damaged beyond repair. This approach reduces our use of materials and better conserves this important piece of World War heritage.

We are also building a new retaining wall to further protect the basement. By securing the parts of this memorial which are invisible to the regular visitor, we are ensuring that this important memorial, and the memory of the 3,800 people it represents, can stand proud for another century.

Find out more about La-Ferte-Sous-Jouare Memorial

Plans for this Memorial were first discussed by the Commission in early 1923. This location was chosen as it was here at La Ferte-Sous-Jouarre that British forces crossed the River Marne during the First Battle of Marne in September 1914. Its design was chosen following an internal competition amongst Commission Architects serving in France or Belgium. 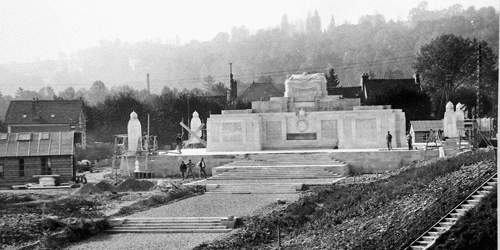 The winning design by Major G. Hartley Goldsmith, Assistant Architect for the Commission in France and Belgium, was chosen by the assessor, Sir Aston Webb in April 1924. After necessary modifications and land acquisition, the tender for construction was accepted in July 1926 and the contractor started work in August 1926.

The memorial is constructed of white / light yellow Massangis stone and surmounted by a sarcophagus onto which military trophies are laid. The memorial itself is ornately decorated with wreaths, downward facing swords and imperial crowns. At the four corners of the paving which surrounds the memorial are stone columns bearing the coats of arms of the four constituent nations of the United Kingdom, each topped by stone urns. 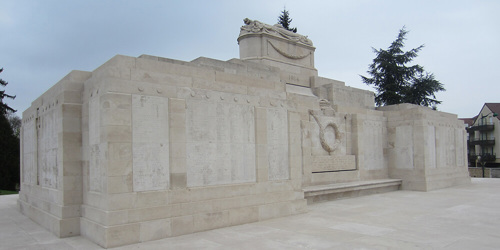 The names of the missing are inscribed on white Portland stone panels from Portland in England.

A stone of remembrance stands on the paving at the front of the memorial.

The memorial was unveiled on 4th November 1928 by Sir William Pulteney, who had commanded the British III Corps in 1914.

The La Ferté-sous-Jouarre Memorial commemorates 3,764 officers and men of the British Expeditionary Force (BEF) killed in the battles of Mons, Le Cateau, the Marne and the Aisne between the end of August and early October 1914 with no known graves.

August to October 1914: From Mons to the Marne

Following Germany's declaration of war on France and Belgium at the beginning of August 1914, Great Britain declared war on Germany on 4 August in support of Belgium's neutrality. 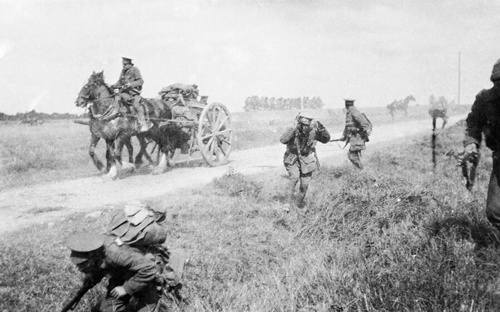 Men of the 1st Middlesex come under shrapnel fire from German artillery during the Battle of the Marne, 8 September 1914.

Within two weeks, a British Expeditionary Force of 85,000 men arrived in France. By 20 August the British Expeditionary Force (BEF), had taken up positions between Maubeuge and Le Cateau as part of a pre-arranged plan with its French allies.  It then proceeded north, into Belgium, to positions to the left of the French 5th Army, where on 23 August it clashed for the first time with the invading German armies at Mons.

During 23 August the British II Corps held the Germans at Mons, but due to the Germans' far superior numbers, the decision was taken to begin a withdrawal the next day. British losses for the day amounted to 1,600.

The general retreat continued as the Germans continued to press aggressively forward.  However, on 26 August, the Germans were temporarily halted during the Battle of Le Cateau. The battle bought the retreating British forces much needed time to withdraw in good order, but losses during this period amounted to 7,812 officers and men.

By the beginning of September 1914, the German Army had swept through much of Belgium and north eastern France and was fast approaching Paris. By 3 September, the British and French forces had been retreating south west for over two weeks, a German victory was a definite possibility, and so French Commander, Général Joffre, prepared to launch a major counter offensive.

On 8 September, British infantry advancing toward the Marne came machine-gun and artillery fire from German units in La Ferté-sous-Jouarre and on the north bank of the river where they had formed a bridgehead. The British withdrew, began bombarding the German positions, and by mid-afternoon had entered the town in force. Both of the local bridges had been blown, but the Royal Engineers immediately began to construct a floating bridge, over which British forces crossed the Marne on 10 September. 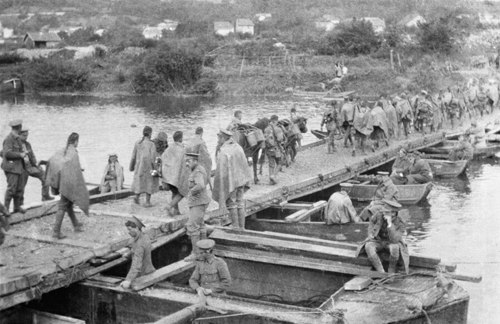 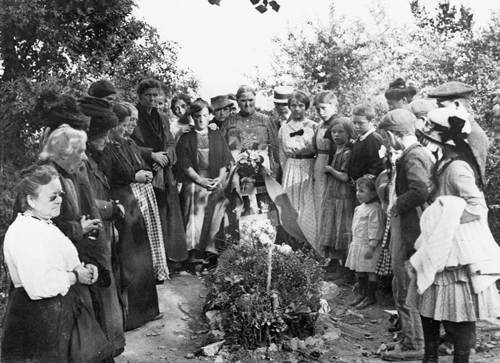 French civilians gather around the grave of a soldier of the Seaforth Highlanders, killed in action at La Ferte-sous-Jouarre,  28 September 1914.