For 11 November 2020, an Armistice Day like no other, the Commonwealth War Graves Commission (CWGC) is urging the public to join with them in paying tribute to the 1.7 million Commonwealth war dead, through a unique act of remembrance. 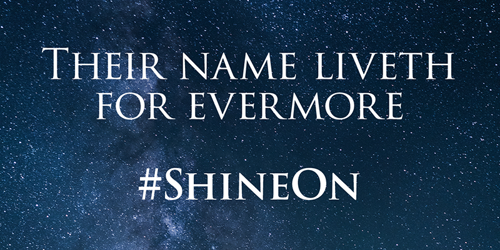 CWGC has created #ShineOn – an inclusive, accessible, digital Remembrance event that is completely free and open to all.

Through a virtual experience on the CWGC website, making use of the Commission’s existing extensive online war records and search facility, the public will be able to name stars after one of the 1.7 million Commonwealth war dead in CWGC’s care. The CWGC is then encouraging everyone to take a moment at 7pm on 11 November 2020 to step outside their homes, look at the stars and remember the fallen.

In a few key locations searchlights will beam light into the Armistice night sky from CWGC cemeteries and memorials, not to encourage crowds, but in a symbolic gesture that the light of remembrance, even in these dark times, will never be extinguished.

CWGC’s Director General, Mr Barry Murphy, explained: “For more than a century, we have gathered at the same time on the same day, to bow our heads and think of those who sacrificed their lives for ours, during the two World Wars. But this year’s different.

“Whilst we can’t come together in person, we can still make sure their names burn bright. Not just for one day, but for all the days (and nights) to come. So, this year, on Remembrance Day, we’ll look up to the stars in our night sky to remember those who fell. All 1.7 million of them.

“I would urge the public to join us by choosing to name a star in remembrance of someone and looking up into the night sky at 7pm on 11.11.20 to remember that person and all those who died during the two World Wars. Together, we can make sure their names Shine On.”

To join CWGC’s Remembrance initiative, visit www.cwgc.org/ShineOn and name a star in remembrance.

Shine On has been created in response to the unique circumstance of this remembrance period. There won’t be mass gatherings at the Cenotaph and war memorials, and many of us won’t be at our usual places of work to hold a communal two-minute silence. Despite this, the CWGC wants to ensure on this Armistice Day (11 November) we still take the time to remember those who fell.

The four locations from where the sky will be lit are the CWGC’s Plymouth Naval Memorial and Brookwood Military Cemetery in Surrey, as well as CWGC’s war grave plots at Cardiff Cathays Cemetery and Edinburgh Rosebank Cemetery.

The lights will be visible for miles around and those who live locally are encouraged to look to the sky at 7pm and watch from the safety of home. The installations are not there to encourage crowds.

The CWGC is committed to commemorating the 1.7 million men and women of the Commonwealth who died during the world wars and is responsible for looking after and maintaining Commonwealth war memorials and cemeteries at 23,000 locations in more than 150 countries and territories.

Name a star after somebody who died in the two World Wars and make sure their names #ShineOn.

View
Share this on
Tags Shine on Armistice Day Remembrance