Nine soldiers of the First World War have been reburied with full military honours at the world’s largest CWGC cemetery today, in the presence of our President, HRH The Duke of Kent.

The men’s remains were first discovered in 2018 and seven of the nine have been identified by the MOD’s Joint Casualty and Compassionate Centre (JCCC). They now lie under headstones bearing their names and personal inscriptions chosen by their descendants in Tyne Cot Cemetery, Belgium.

Today’s ceremony, organised by JCCC, was conducted by a burial party from Royal Regiment of Fusiliers and attended by descendants of five of the casualties

Alongside The Duke of Kent, our Vice Chairman Sir Bill Rollo, and Director General Claire Horton were able to witness the final goodbye, more than 104 years after these men were killed serving their country. 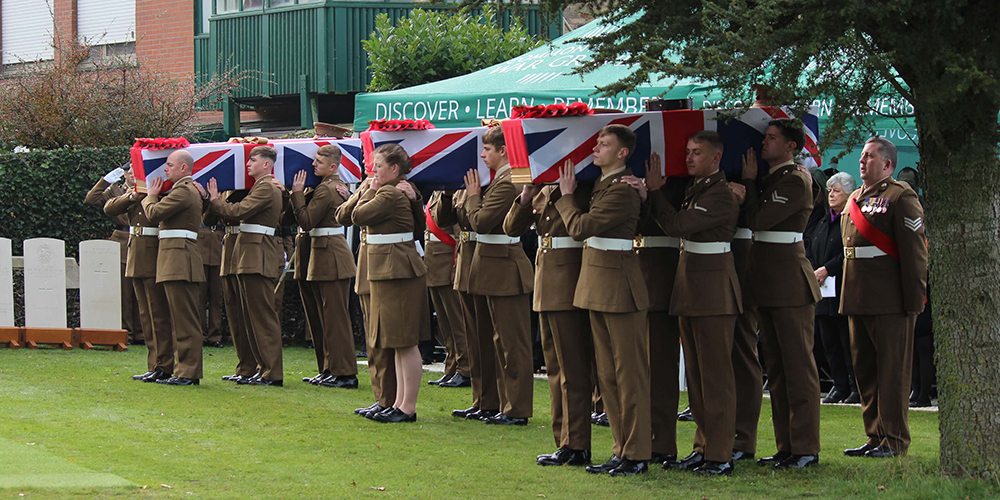 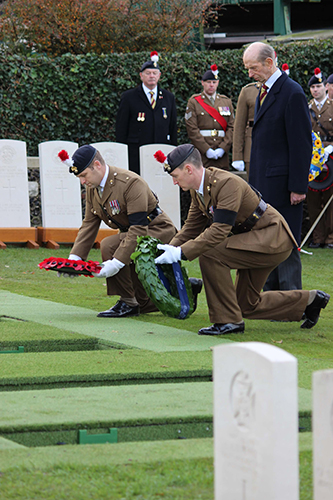 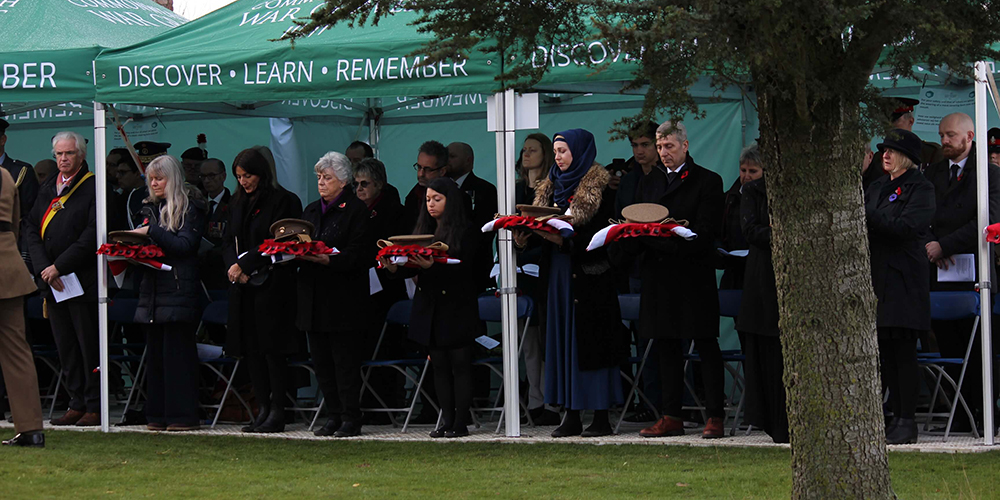 Claire Horton, Director General of CWGC, said: “We are honoured to have worked alongside the JCCC in the recovery and identification of these men and to now be caring for them in perpetuity in Tyne Cot, CWGC’s largest cemetery. The fact that so many of them have been positively identified is testament to the collective dedication that continues to this day, to remember our fallen.”

Nicola Nash, JCCC, said: “After working on this case for nearly three years, it gives me an immense feeling of pride to see these men finally being laid to rest. It has been wonderful to share this emotional day with so many of the family members, who have travelled as far as Australia to attend. The sacrifice these men made will never be forgotten.”

Seven of the casualties buried today died on 14 October 1917. Lance Corporal Blakeborough is believed to have been killed in a separate incident a day earlier. The soldier whose regiment is unknown was found separately and his date of death could not be established.

The men reburied today were:

Further details on the identified casualties

2Lt Ablett was born in Manchester on 9 June 1897, the son of Joseph a ‘Fur Buyer’ and Caroline Ablett. He had one brother, Frederick.

Leslie’s family had moved from Manchester and was living in Streatham, London by 1911. He attended Alleyn’s School from 1908 to 1913 and was described as ‘bright, cheerful and of good tone’. Leslie was also a keen poet and writer. He enlisted in October 1915, being commissioned less than a year later and joining the 11th Battalion, Northumberland Fusiliers.

2Lt Bruty was born on 7 December 1895, one of nine children of William and Edith Bruty, of Dulwich, Surrey.

Edward was a ‘Railway Clerk’ before he enlisted in September 1914 as a Rifleman in the Queen Victoria’s Rifles. He subsequently moved his way through the ranks, transferring to the Army Cyclist Corps and being promoted to Serjeant. He was commissioned in February 1917 and joined the 11th Battalion, Northumberland Fusiliers.

Sjt Feasby was born in Eston, Yorkshire on 8 October 1885, the son of Joseph and Catherine Feasby. He had one brother, George, who he was listed as living with on the 1901 census, both of them working as Tram Conductors.

By 1911, Thomas was working as a Foreman at the local Steelworks in Eston. Unfortunately, his military records have not survived, but he served in 11th Battalion, Northumberland Fusiliers for a majority of the war, being promoted to Sergeant.

LCpl Blakeborough was born in Pateley Bridge, Yorkshire on 17 August 1896,  the son of Harry and Mary Blakeborough. Stanley had five brothers and two sisters. His two brothers, Charles and Donald also both fought during the First World War. Sadly, Donald was killed less than three months after Stanley.

Unfortunately, Stanley’s military records have not survived, but it is known that he served in the 11th Battalion, Northumberland Fusiliers for the majority of the war, being promoted to Lance Corporal.

Photo courtesy of the Ruffai family

Pte Miller was born in Cockerton, near Darlington, on 21 November 1888, one of eight children of  James and Anne Miller. Harry married Melita Florence Birkett on 22 May 1909 and they had four children: Annie, James, Minnie and George.

Harry was a farm labourer and lived with his family in Burton Leonard, Yorkshire. His war records have not survived, but it is known that he served in the 11th Battalion, Northumberland Fusiliers for a majority of the war.

Photo courtesy of the Clayton family

Pte Patrickson was one of the nine children of Robert and Lucy Patrickson. He was born in Gateshead, Durham on 12 October 1893. Before enlisting, Joseph was an errand boy for a fruit retailer. Although his military records have not survived, he was was awarded the Military Medal (MM) for his bravery during the fighting in October 1917 whilst serving in the 11th Battalion, Northumberland Fusiliers.

Pte Sanderson was born on 16 June 1891, the son of Thomas and Emily Sanderson. He lived with them and his six sisters in Darlington and worked at the local Railway Plant.

Although Arnold’s military records have not survived, he was awarded the Military Medal (MM) for his bravery during the fighting in October 1917, whilst working as runner for the officers. A letter written to his mother by 2/Lt J.S. Youll VC stated that he was thought of a great deal by the officers and men. He was described as a good soldier who always did his duty.