Since March the Thiepval Memorial to the Missing of the Somme has been closed to the public as a major restoration takes place.

Over the last two months the appearance of the memorial has changed significantly. Because of the scale of the work, and the need to protect this historic monument, a preparatory phase was necessary. 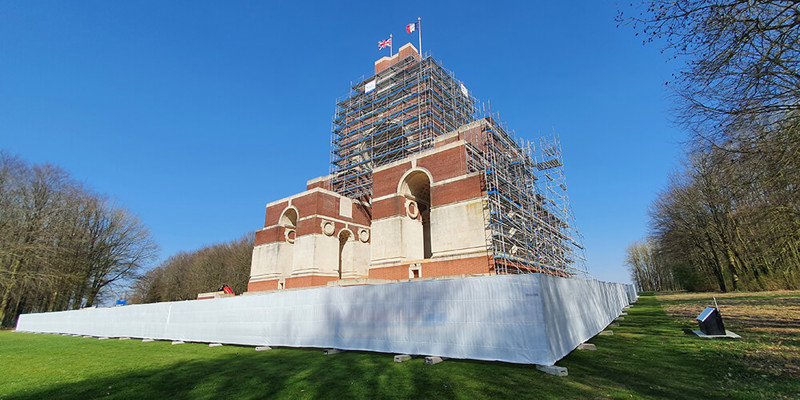 As a first step, the contractors built a temporary road on the side of the memorial to allow safe access for machines and materials. Fencing was then installed around the memorial to ensure that the site is completely closed off and secure.

On the inside of the memorial and the terrace, wooden boards have been laid to protect the paving and the Stone of Remembrance.

The next significant step was the scaffolding installation around the monument, which took more than a month to complete.

Following this essential milestone, the renovation work has started in earnest with the cleaning of the brickwork of the 1,099 m2 top section of the memorial. And so far, more than 1,880 wall ties have been added to ensure the stability of the monument.

The major next step will be the restoration of the natural stone elements, including some of the commemorative panels and cornices and ornamental features of the paving. The commemorative name panels that cannot be restored and need to be renewed, will be engraved by CWGC at our operational hub in Beaurains, near Arras (Pas-de-Calais, France).

Designed by Sir Edwin Lutyens, the Thiepval Memorial commemorates by name the 72,000 British and South-African missing soldiers of the First World War in the Somme area, as well as honouring the alliance between France and Great-Britain.

At almost 90 years of age, the monument has undergone regular maintenance operations and modifications since its inauguration in 1932.

Throughout the current work, it will not be possible for visitors to access the name panels until completion in Spring 2022.

Until then visitors are invited to explore a free-to-use digital exhibition In The Shadow of Thiepval available on site using a smart phone or tablet. The exhibition explores the history of Thiepval Ridge, the Battle of the Somme and lets visitors browse recreations of the 72,000 names commemorated here. 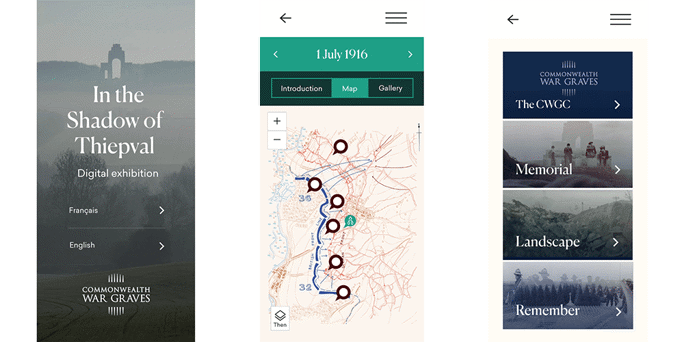 Find out more about the Thiepval Restoration project

Monument Group, a specialized restoration contractor, have been appointed to support CWGC to preserve the iconic structure for future generations, alongside architects Bressers Erfgoed.

We would also like to thank  our French partners, La Direction Régionale des Affaires Culturelles (D.R.A.C.), La Région Hauts-de-France and Le Conseil Départemental de la Somme, for their approval for the works and financial support.

Share this on
Tags Thiepval Memorial Our work continues