Over 300 Commonwealth servicemen and women of the two world wars are commemorated in Lawnswood cemetery. Many died of wounds at the 2nd Northern General Hospital, one of the largest hospitals in the north of England during the First World War, and their families requested that they be laid to rest in Lawnswood Cemetery. Today many of their graves cannot be individually marked and so you will find a screen wall memorial here which names each person whose grave we cannot place a headstone upon.

Lawnswood Cemetery was opened in 1875 with the cemetery buildings and layout designed by the Leeds-based architect George Corson. During the First World War, the newly opened City of Leeds Training College at Beckett Park transformed into the 2nd Northern General Hospital and would become one of the largest in the north of England. Most of the 57,000 men treated in Leeds between 1914 and 1919 recovered but about 200 died. Some of these are commemorated here. Leeds continued to operate as an important centre for medical care during the Second World War, and again burials were made in Lawnswood by local families.

Today, we commemorate over 300 Commonwealth servicemen and women of the two world wars here. 88 of them form a war graves plot in Section W. As many of the service graves in the war cemetery cannot be marked individually, the names of the dead are inscribed on a screen wall. The rest of the First World War burials and all of the 67 Second World War burials are scattered throughout the cemetery. A further screen wall bears the names of 105 casualties of both wars buried in Leeds General Cemetery, where their graves could no longer be maintained. In addition, the names of 94 service personnel who were cremated at Lawnswood during the Second World War can be found on the Cremation Memorial which is located in the central hall of the Columbarium which is kept locked. The key can be picked up from the chapel staff at the crematorium.

Find the casualties commemorated on the Cremation Memorial

During the First World War, the newly opened City of Leeds Training College at Beckett Park became the 2nd Northern General Hospital and would become one of the largest in the north of England. At its largest it could accommodate 3,200 patients in several buildings across the city including part of Leeds General Infirmary and several large private homes. East Leeds War Hospital, the other ‘central’ hospital receiving cases direct from the fighting fronts, had more than 900 beds. 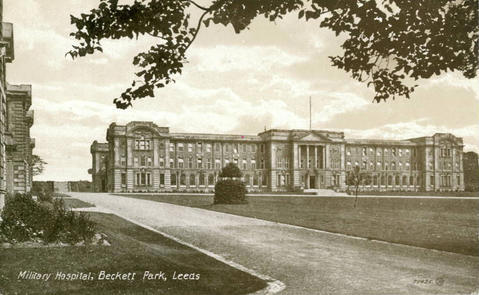 In 1914, the City of Leeds Training College at Beckett Park was taken over by the military and designed the 2nd Northern General Hospital. © Leeds Beckett University, GB 2830 BPL/22/1/2

By 1917, some facilities in Leeds largely treated orthopaedic cases, fitting artificial limbs, but specialist dental and facial-reconstruction work was also undertaken, reflecting the advances in medicine of the First World War. Most of the 57,000 men treated in Leeds between 1914 and 1919 recovered but about 200 died. Some of these are commemorated here. 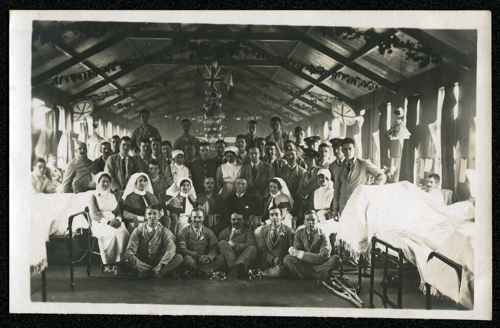 Among the casualties of the First World War buried in Lawnswood is Captain Clifford Crawshaw Pickles of Royal Army Medical Corps, a medical doctor who served in command of a battlefield casualty clearing station. Caring for casualties at the front for three months in 1915 took its toll and he was returned to Leeds ill and suffering psychological trauma. He was invalided out of the service in October 1915, and died on 22 December 1916 after continuing ill health, aged 30. 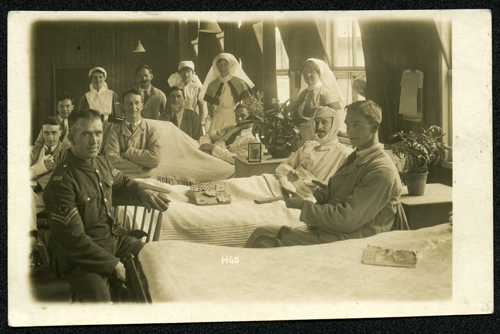 Leeds continued to operate as an important centre for medical care during the Second World War. The swimming baths at Armley and Bramley were repurposed as first aid stations and Harewood House and Lotherton Hall were used as military hospitals. Many local businesses and firms became important in manufacturing for the war effort, such as Blackburns and Avro which made aircraft, as well as engineering firm Vickers Armstrong which was responsible for producing two thirds of the British Army’s field artillery during the war.

Many of the Second World War dead commemorated at Lawnswood were airmen killed in operations and training accidents around the United Kingdom. Pilot Officer John Edward Anthony Harrington Fairfax, who received the Distinguished Flying Medal during his service, was an instructor at the RAF bomber training base at Edgehill. On 4 October 1941, Pilot Officer Fairfax set off in poor conditions to return to Moreton-in-Marsh but crashed shortly after take-off. All seven men on board were killed. Fairfax is buried in Sec. S. Grave 895.

During the Second World War, 94 servicemen and women were cremated at Lawnswood Crematorium. A memorial bearing their names can be found in the central hall of the Columbarium.

Before visiting Lawnswood Cemetery we recommend that you check out:

Hull (Northern) Cemetery is the final resting place of over 400 world war servicemen and women. Many of those buried here were laid to rest by their families.

Buried or commemorated at Newcastle-Upon-Tyne (West Road) Cemetery & Crematorium are nearly 200 Commonwealth servicemen and women of the Second World War.