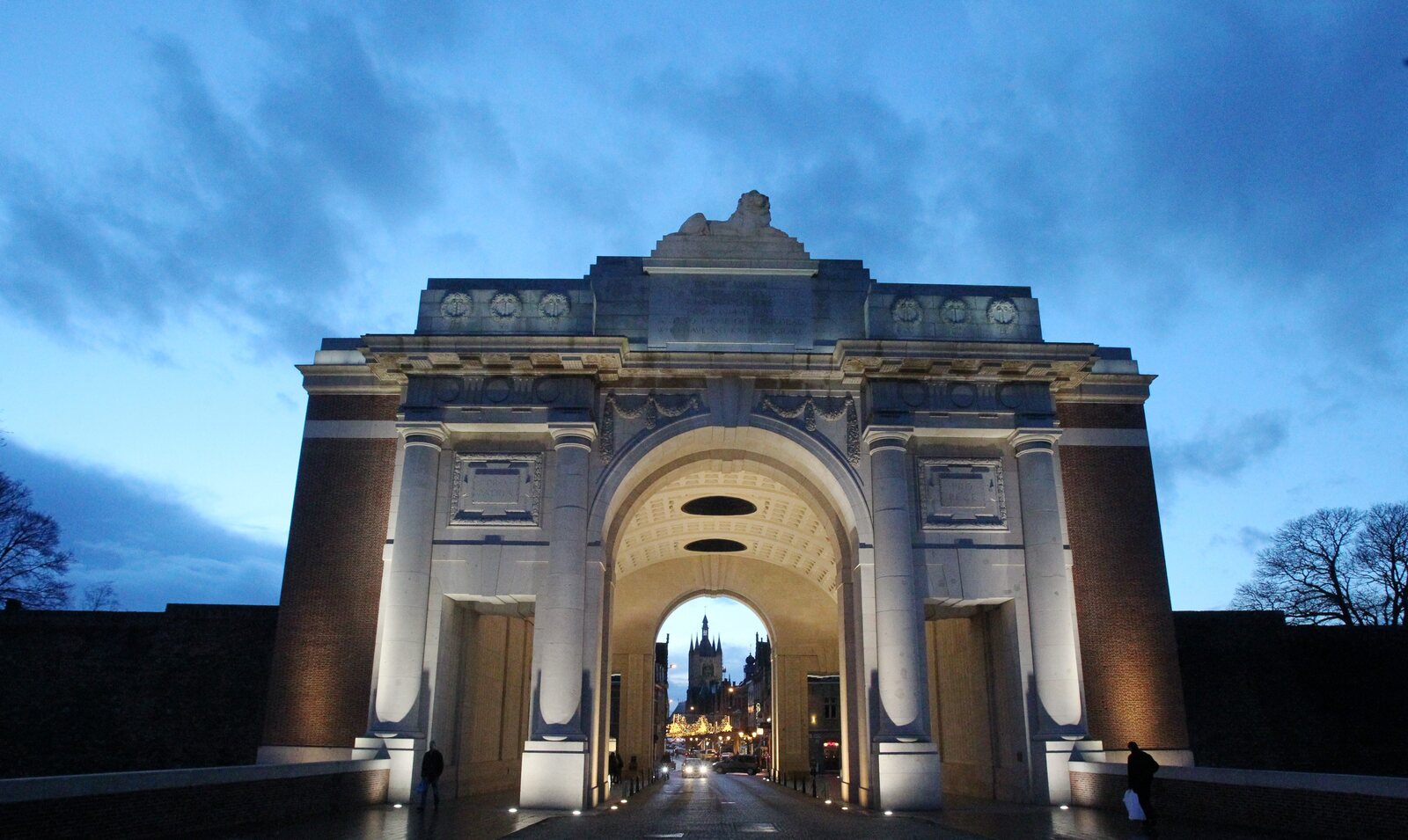 Get to know some of the Commission’s most significant Belgium war memorials with this handy guide.

Where are the war memorials in Belgium?

World War One and Two spread all over Belgium. The country, bordering both France and Germany, was caught up in both conflicts from their respective beginnings.

From Zeebrugge on the North Sea coast to Liège in the East, you’ll find a Commission cemetery or memorial close to all the major Belgian battlefields.

Many of the locations have gone down in folklore. Names like Passchendaele, Ypres, Neuve-Chappelle, and Flanders immediately conjure iconic images of Great War trenches and fighting, for instance.

The regions around the Ardennes Forest and the border forts famously featured heavily at the start of World War Two, while campaigns to liberate Belgium and the key port of Antwerp would be launched in 1944. Full liberation would not be completed until early 1945.

The Menin Gate commemorates thousands of British, Australian, Indian, Canadian, New Zealand and South African troops who fought in and around the Ypres Salient but have no known grave. In the case of UK and Kiwi soldiers, only those who fell before 16 August 1917 are commemorated on the gate’s names list. Since its construction, it has become one of the Commission’s most iconic, visible sites. 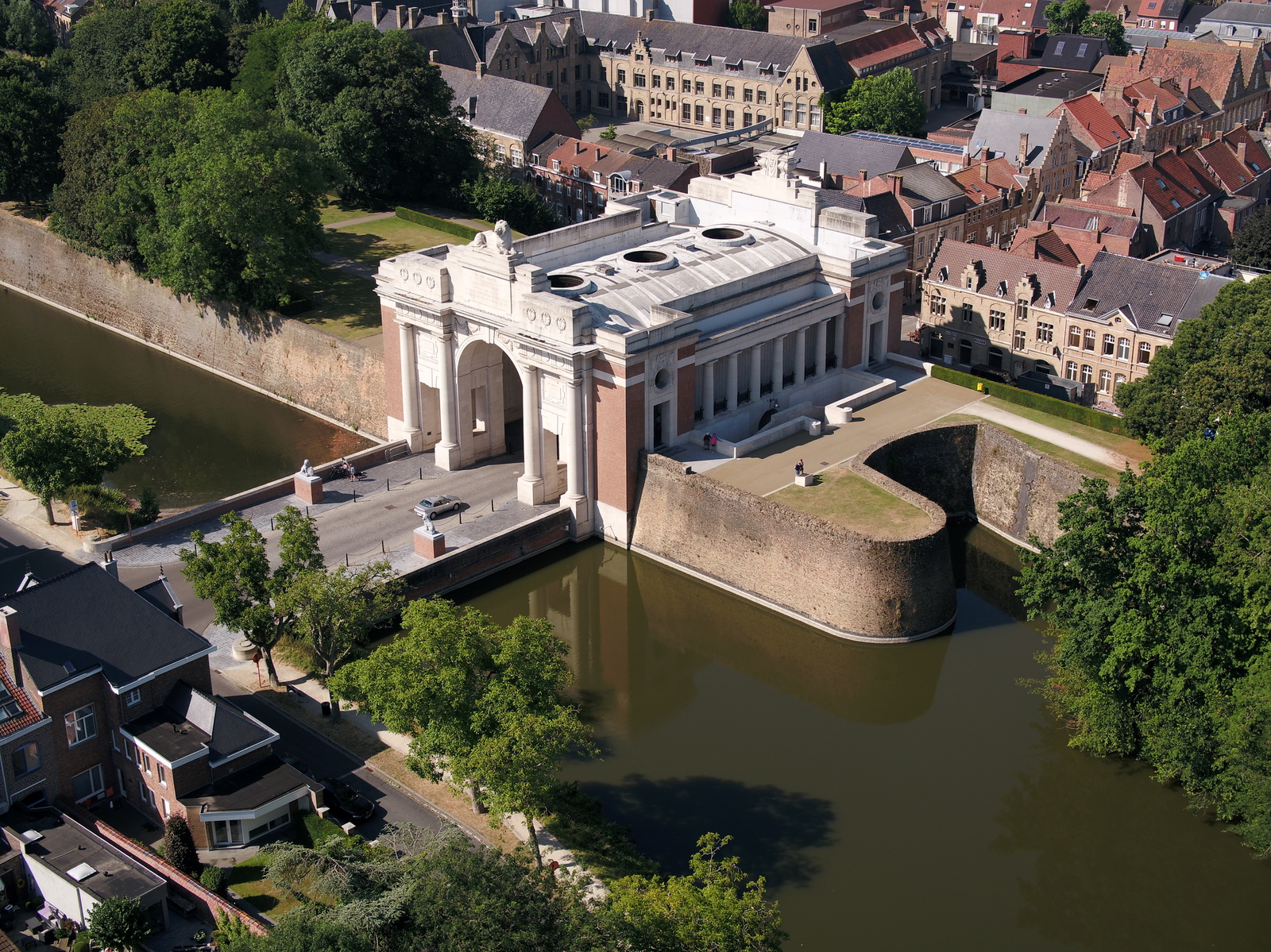 Hundreds of thousands of troops passed along the road where the Menin Gate now sits. 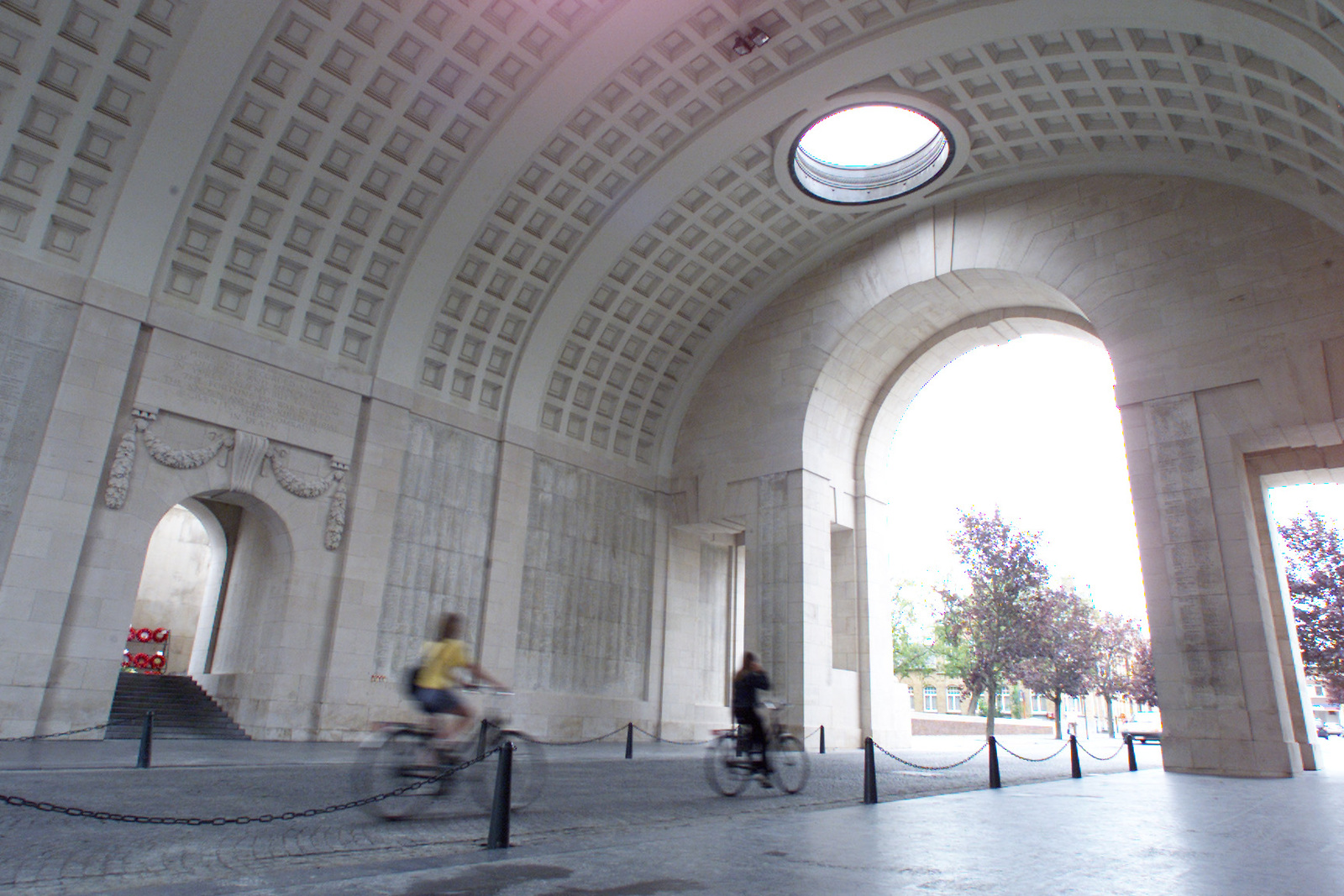 Approximately 54,500 names of missing soldiers are inscribed on the memorial's walls and panels. 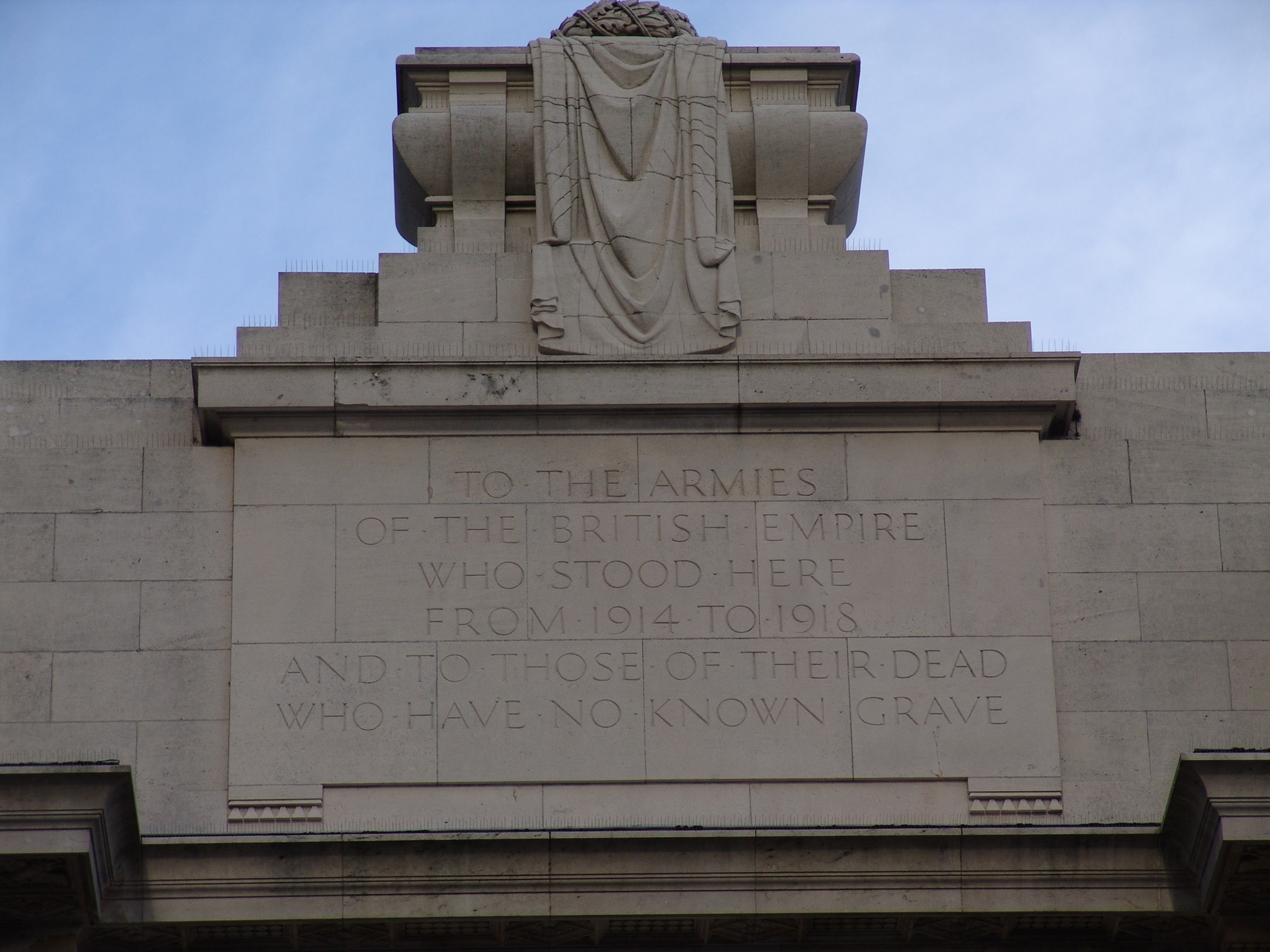 The Gate is capped off with this simple tribute to the fallen.

The Gate was chosen as the location for a memorial because of its wartime significance.

Throughout World War One, Commonwealth troops from around the world would pass through the Gate on their way to frontlines around the Ypres Salient. Around 300,000 would die in fighting defending the city or in campaigns in the general West Flanders region.

Ypres was one of the most hotly contested cities during World War One. Its strategic location on the Western Front meant no less than five battles were fought to control it throughout the course of the war.

Fighting began here in 1914 when a small British Army force pushed German opposition out of the city. The German soldiers would retreat to the Passchendaele ridge, several kilometres away. Passchendaele would become a combat hotspot in years to come.

The Second Battle of Ypres began in April 1915. This is notable as it’s the first time gas was used in combat during the war, with German soldiers deploying chemical weapons in an attempt to oust the British Army from its Ypres positions.

Fighting in West Flanders would cool before 1917 and the Third Battle of Ypres took place. Another two offensives would take place in and around the region, including the bloody Battle of Passchendaele, before the end of the war.

The cumulative cost of fighting in and around Ypres had been high. It was soon clear that a multitude of memorials and cemeteries would be needed to commemorate the fallen due to the sheer volume of casualties sustained during the West Flanders campaigns. The Ypres War Memorial (Menin Gate) would be one of these. 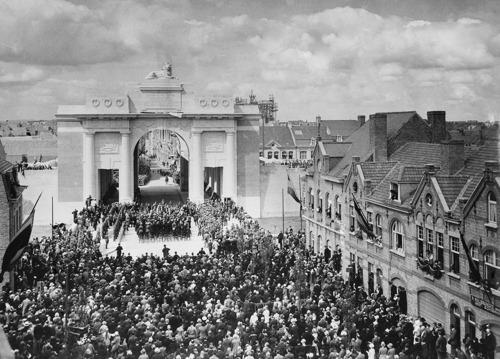 As one of the first Commission sites to be built, Menin Gate attracted attention from some of the most prominent figures of the era. Rudyard Kipling, for example, provided various inscriptions for the memorial in his role as the Commission’s Literary Advisor.

The Gate had sustained damage during four years of warfare, thus one of Britain’s top architects was drafted in to design a memorial that would span the site. The resulting structure was designed by Sir Reginald Blomfield. His work, with its iconic arch, is one of our most recognisable sites.

Bloomfield’s design was submitted and approved in 1921. Construction lasted until 1927 when the Menin Gate Memorial was unveiled in a ceremony led by Field Marshal Herbert Plumer. Thousands of veterans, their families, and locals gathered to mark this momentous occasion.

Approximately 54,500 names of missing soldiers can be found in the Menin Gate’s memorial hall and adorning its triumphal arch.

These names represent a mixture of troops from across the Commonwealth. Speaking at the unveiling, Field Marshal Plumer stated that those in Ypres aren’t truly missing, they are here, noting the arch’s role in keeping their memories alive. 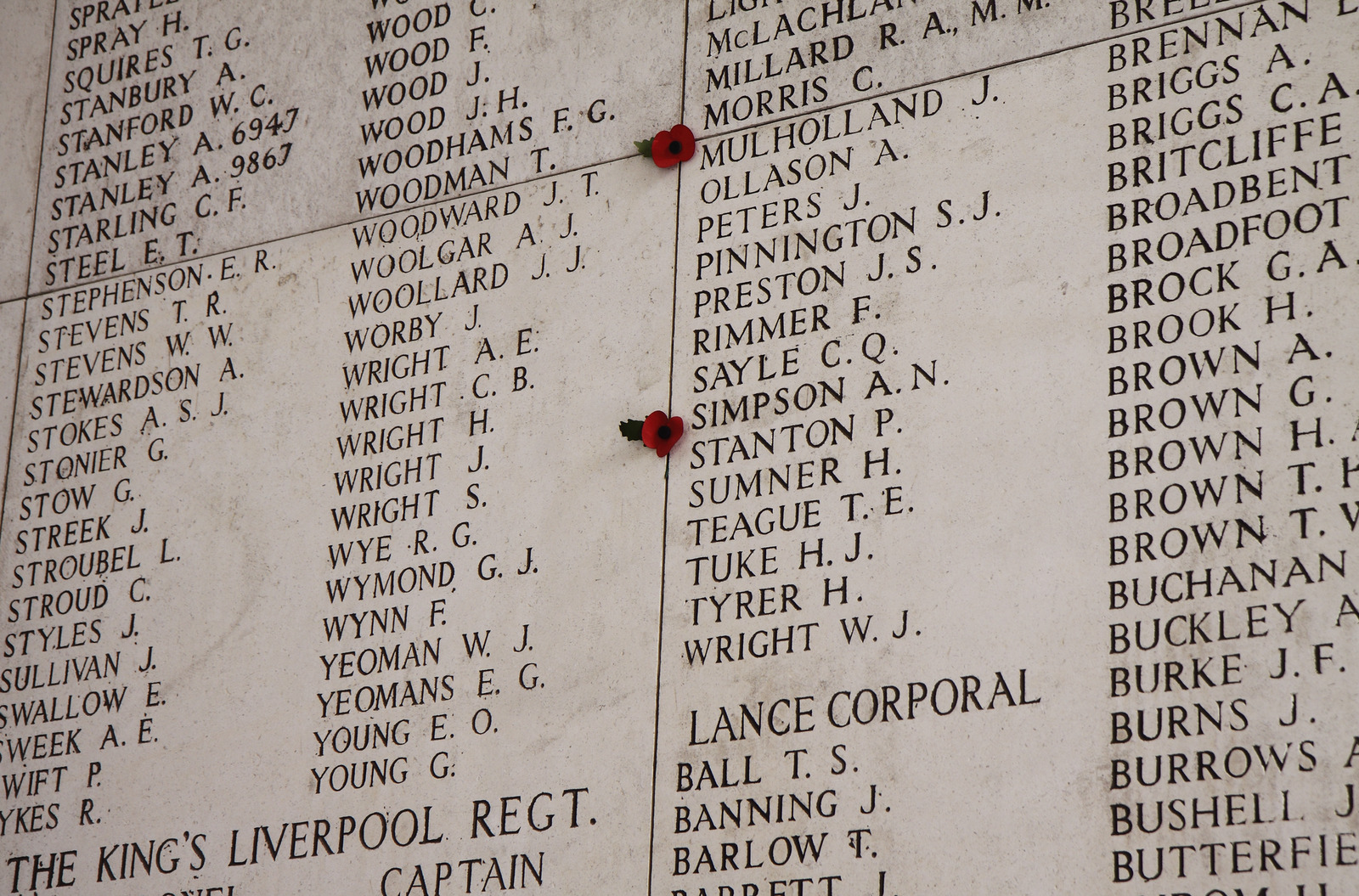 Some of the tens of thousands of names of the missing adorning the walls of the Menin Gate.

Tyne Cot is the largest Commission cemetery in the world. Nearly 12,000 Commonwealth servicemen are buried here, over 8,000 of which are unidentified.

As we know, not all soldiers who died during the Great War were recovered for proper burials. To mark some of these men, has a memorial to the missing sits within the grounds of Tyne Cot Cemetery: The Tyne Cot Memorial. Over 34,000 names are inscribed on its walls, commemorating soldiers who fell with no known grave. 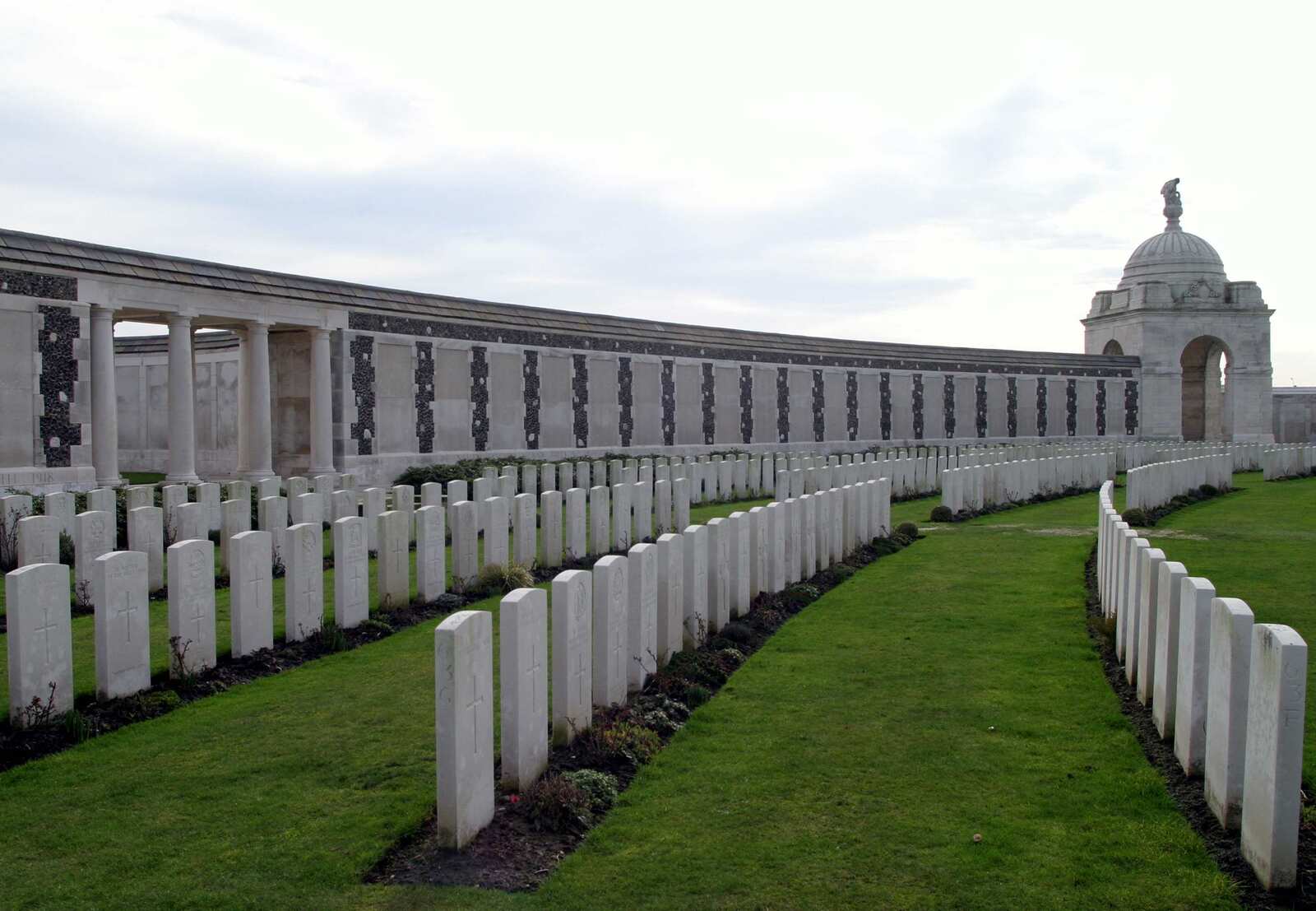 The Memorial also marks the furthest point the Allies reached in Belgium prior to victory in 1918. 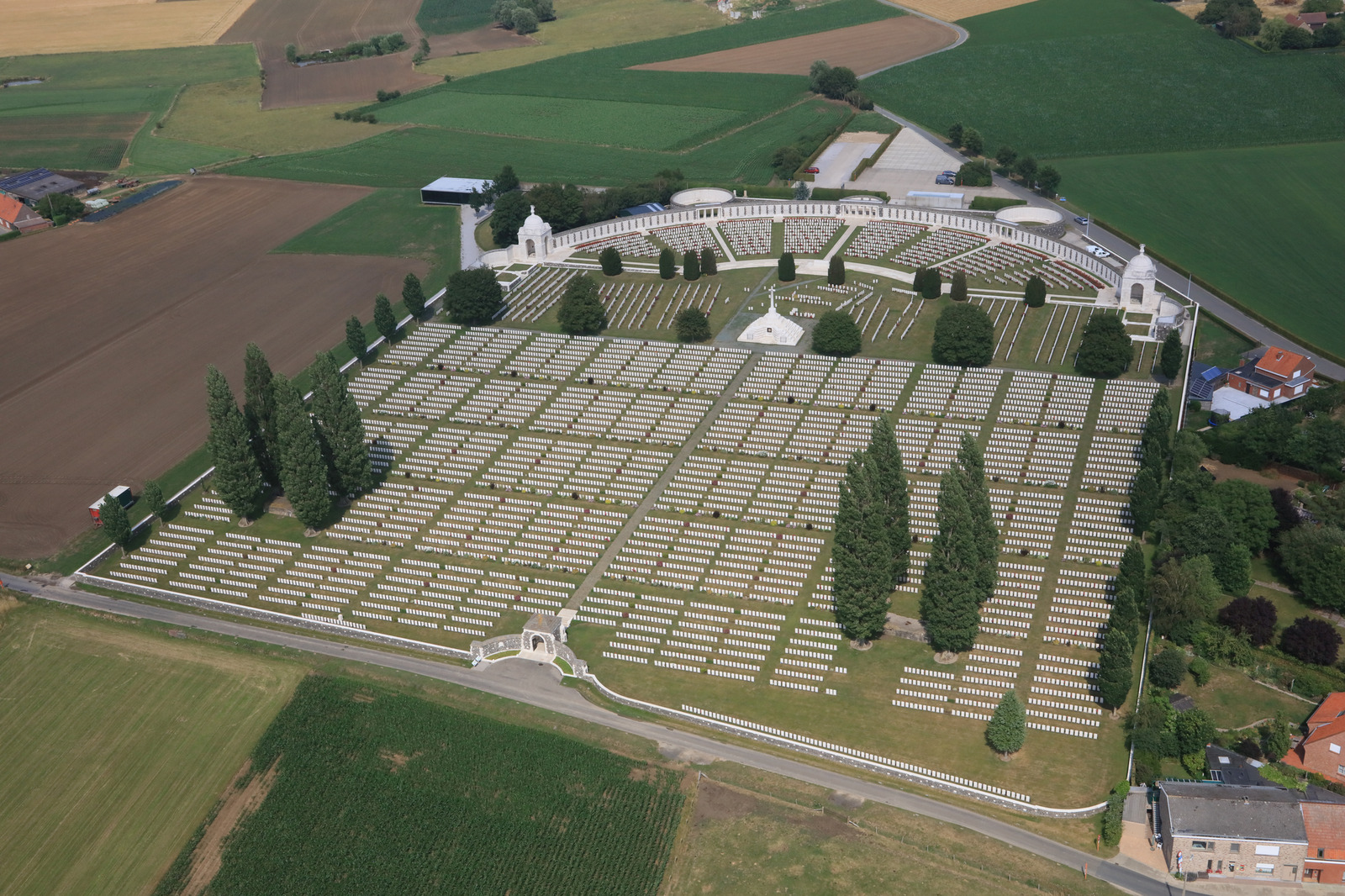 The Tyne Cot Memorial itself sits close to the farthest point the Allies reached in Belgium before the final victory in 1918. It was designed by Sir Herbert Baker with sculpture work supplied by F.V Blundstone.

The origins of Tyne Cot go back to 1917, during the Allied advance on Passchendaele. The site where the Tyne Cot Cemetery and Memorial now sit was once a German-controlled ridge. It was captured by the 3rd Australian Division during the Battle of Passchendaele. Its name derives from a barn on the site the Northumberland Fusiliers dubbed “Tyne Cottage”, shortened to Tyne Cot.

The cemetery was briefly back in Imperial German hands in 1918 before finally being captured for good by the Belgian Army.

Interestingly, the remains of German defences are still dotted around Tyne Cot. Thick-walled bunkers are located around the cemetery, showing its origins as a military strongpoint. One particularly large bunker was used as an aid station for Allied troops during the push on Passchendaele for instance.

Tyne Cot is often one of the highlights of any Belgium war graves tour thanks to its size and important history.

Belgium also played host to many important battles of World War Two. From the Wehrmacht’s initial push through the Ardennes to the Battle of the Bulge, the Liberation of Antwerp and beyond, strong fighting took place here.

As such, you will find several World War Two cemeteries holding commemorating British and Commonwealth soldiers throughout Belgium. We maintain over 300 sites across the country with at least one World War Two casualty commemorated or buried there. Often, these sit within large, but here is a selection of major World War Two Belgian war graves, cemeteries and memorials we look after.

When it comes to specific memorials, however, there are none dedicated specifically to World War Two casualties in Belgium. Several special memorials stand instead. These are much smaller, often taking the form of unique headstones or smaller panels within large burial grounds throughout the country.

Have these sites piqued your interest? If you would like to visit any of the CWGC memorials in Belgium, then please use our Find War Cemeteries & Memorials tool.

Just filter by country by selecting Belgium and the full list of locations will be available for you to browse. Click on each site to see its location on Google maps and directions on how to reach it.

The CWGC Ieper Information Centre is in Ypres, West Flanders.

Drop in to learn more about the Commission’s local memorials and cemeteries, do some research into our casualty database, or ask our friendly staff any of your burning questions about us and the work we do.

You can also pick up a souvenir from the CWGC shop or join our membership scheme.