Commemorating the Missing of World War Two on the Brookwood Memorial

Shortly after the end of World War Two the Commission began the mammoth task of planning memorials to the missing, which would be erected close to the theatres of war as they had done so after World War One. But, there were men and women who had lost their lives out at sea, during raids, or whilst recuperating at home so it would not be possible to commemorate them in this way. Sigourney Lee, the Conservation Training Advisor for the CWGC, uncovers the story of one of these memorials and how it's being maintained today for future generations. 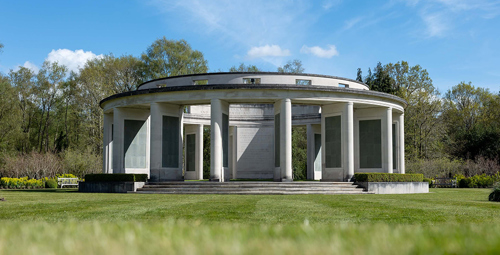 Discussions with the War Office in 1948 led to the proposal of using Dover Castle as the preferred site for a Memorial to the Land Forces. The area marked in red was the intended location for the ‘Land Forces Memorial’ (July 1950), whilst Trondheim (Stavne) Cemetery was suggested for those who died during the Norway campaign and the associated raids. 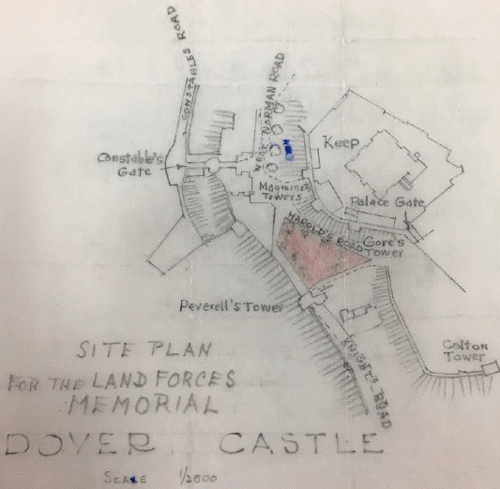 Deliberations continued until late 1954 when it was agreed that a more worthy structure could be erected if the two proposals were combined to commemorate some 2,700 casualties. Brookwood Military Cemetery was chosen as it was the largest Commission site in the UK, with long formal avenues lined with giant sequoia trees – which are purported to be part of the original planting scheme when the Cemetery was established in 1854 by The London Necropolis Company Ltd.

The plan for the ‘Brookwood Memorial’ was finalised in 1957 by Ralph Hobday ARIBA, who was the Commission’s Senior Architect at the time.

“Although the number of names to be commemorated is comparatively small, it is considered essential that the Memorial should not be insignificant in scale…” (Hobday, 1955)

The Memorial takes the form of an open rotunda made from Portland stone. Fourteen stelae, which have been faced with Broughton Moor slate, hold the engraved names of the casualties. In the centre there is a slightly raised grassed court surrounded by Portland paving creating a walkway around the Memorial. Facing this central court is a curved wall which is inscribed with the following words:

THIS MEMORIAL BEARS THE NAMES

MEN AND WOMEN OF THE FORCES OF

THE BRITISH COMMONWEALTH AND

EMPIRE WHO GAVE THEIR LIVES IN

THEIR OWN COUNTRY AND IN MANY

FOREIGN LANDS IN HOME AND DISTANT

NORWAY AND IN LATER RAIDS ON THE

COAST OF EUROPE AND TO WHOM THE

FORTUNE OF WAR DENIED A KNOWN

Hobday designed the Memorial with classical features, such as the punctuated frieze which allows light to shine through the openings and catch the slate panels giving the impression of clerestory windows in a church drawing the eyes heavenwards. When stood in the centre of the Memorial the fourteen stelae create different vistas of the Cemetery, this semi-enclosed space allows for quiet reflection and calm. Overall, the Memorial has a strong resemblance to a Roman temple with the central space being the ‘templum’, a sacred enclosure or sanctuary. 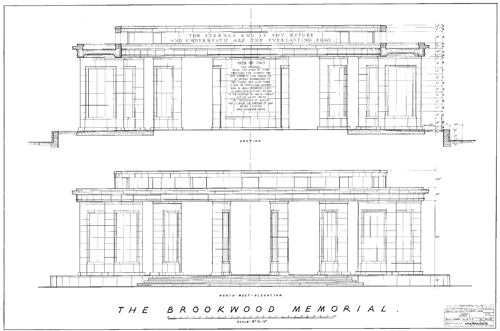 It was built by E. H. Burgess Ltd who was also the builder for the Merchant Navy Memorial at Tower Hill, London. It cost north of £16,000 to construct and the design received much attention after it was shown in The Architect and Building News, a popular journal of the time. Work began in early 1957 and took just under two years to complete.

The Queen unveiled the Memorial on 25th October 1958 with a highly attended ceremony of over 7,000 relatives, official guests, and Regimental Representatives, and it was even broadcast by the BBC.

“Here, in this peaceful garden the memory of these men and women, differing in race and religion but united in the cause for which they fought and died, will be kept ever green.” (The Queen’s address, 1958) 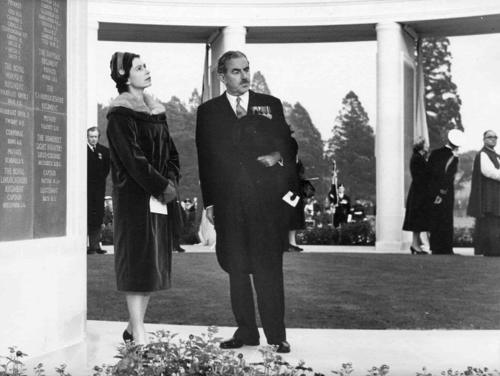 The Queen and Ralph Hobday at the unveiling on 25th October 1958. (Copyright: Frandor). A year after the unveiling Hobday was awarded an OBE for work in designing the Memorial.

Today the Memorial commemorates 3,377 men and women, 80 of whom served in the Special Operations Executive (SOE) who either died as prisoners or whilst working with Allied underground resistance movements. Violette Szabo (Panel 26, Column 3) is one of these casualties and is renowned for her courage and strength in the face of horrible treatment in the hands of the enemy, she was posthumously awarded the George Cross for her selflessness.

Since construction the Memorial has only needed minor maintenance works, often due to freeze-thaw cycles which cause the Portland stone to fracture. The chief concern were the ongoing drainage issues to the land on which the Memorial stands. During World War Two this section of the Cemetery was used by the Americans to bury those who had lost their lives in the UK, or in the surrounding waters but, by mid-1944 the section was full.  All further burials took place in the Cambridge American Cemetery and in 1948 those that had been buried at Brookwood were exhumed and relocated there. It is likely that this, combined with the natural wetland of the site, has caused continuous drainage issues. 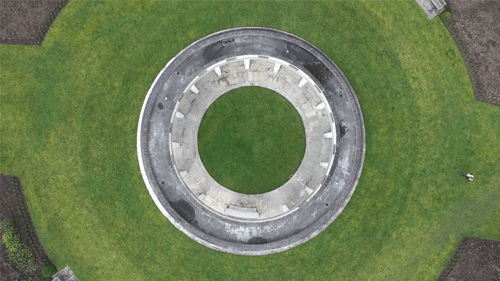 Brookwood Memorial from above

During a recent condition survey, in which a drone was used to examine the roof, a few maintenance concerns were raised – one of which was the drainage! The first phase of work looked at how the drains are connected around the Memorial. A specialist company was then able to clean the internal pipework, running from the roof to the ground, and ensure proper drainage from the central raised grass court.

The second phase of works are now underway with our in-house stonemasons carrying out a complete conservation of the Memorial. This entails a gentle steam clean to remove heavy soiling and expose the joints. The team can then carefully repoint the whole structure using lime mortar, whilst replacing some damaged or broken pavers and steps. All works follow conservation best practice, with the use of like-for-like materials and traditional techniques. 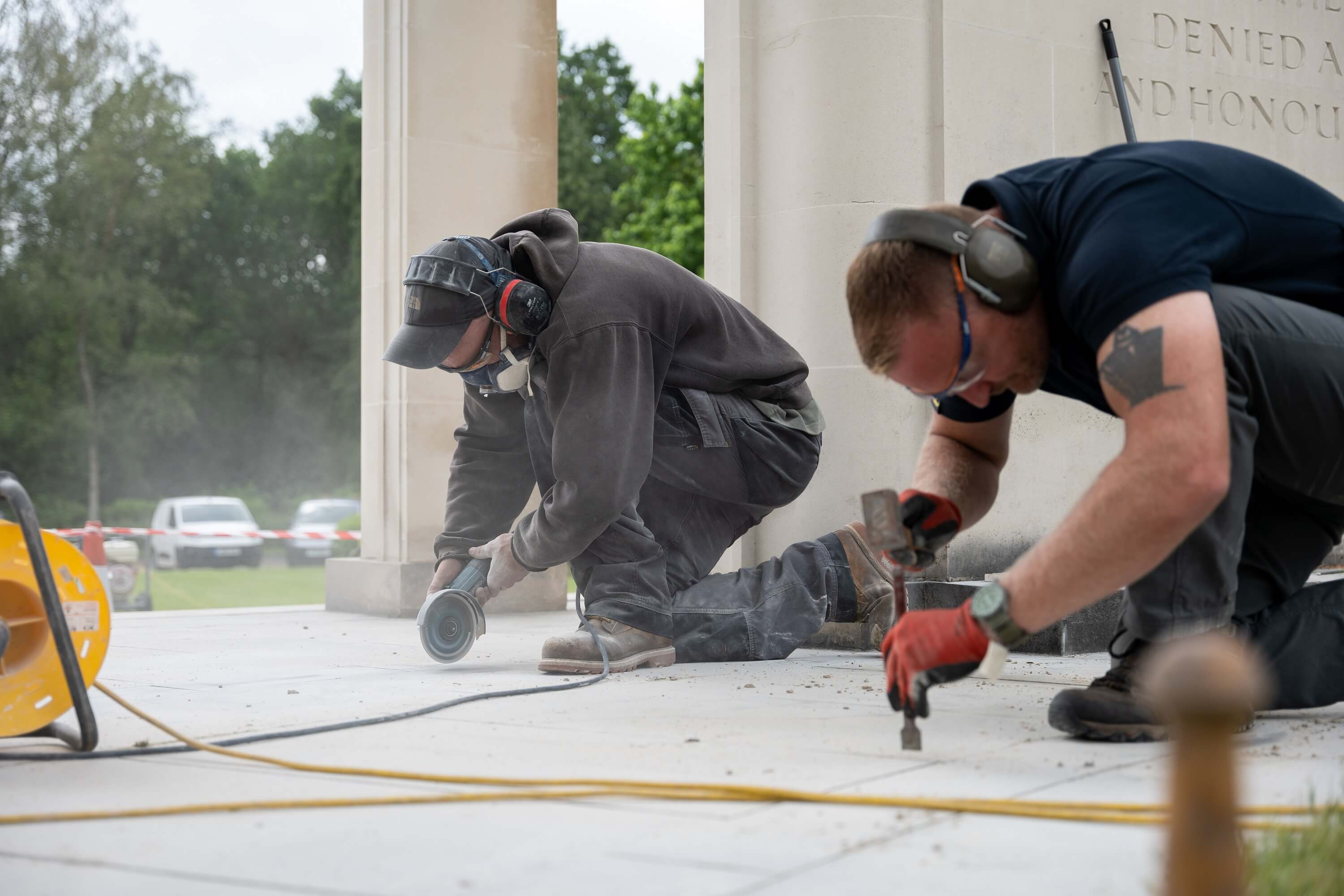 Stonemasons working on the Brookwood Memorial 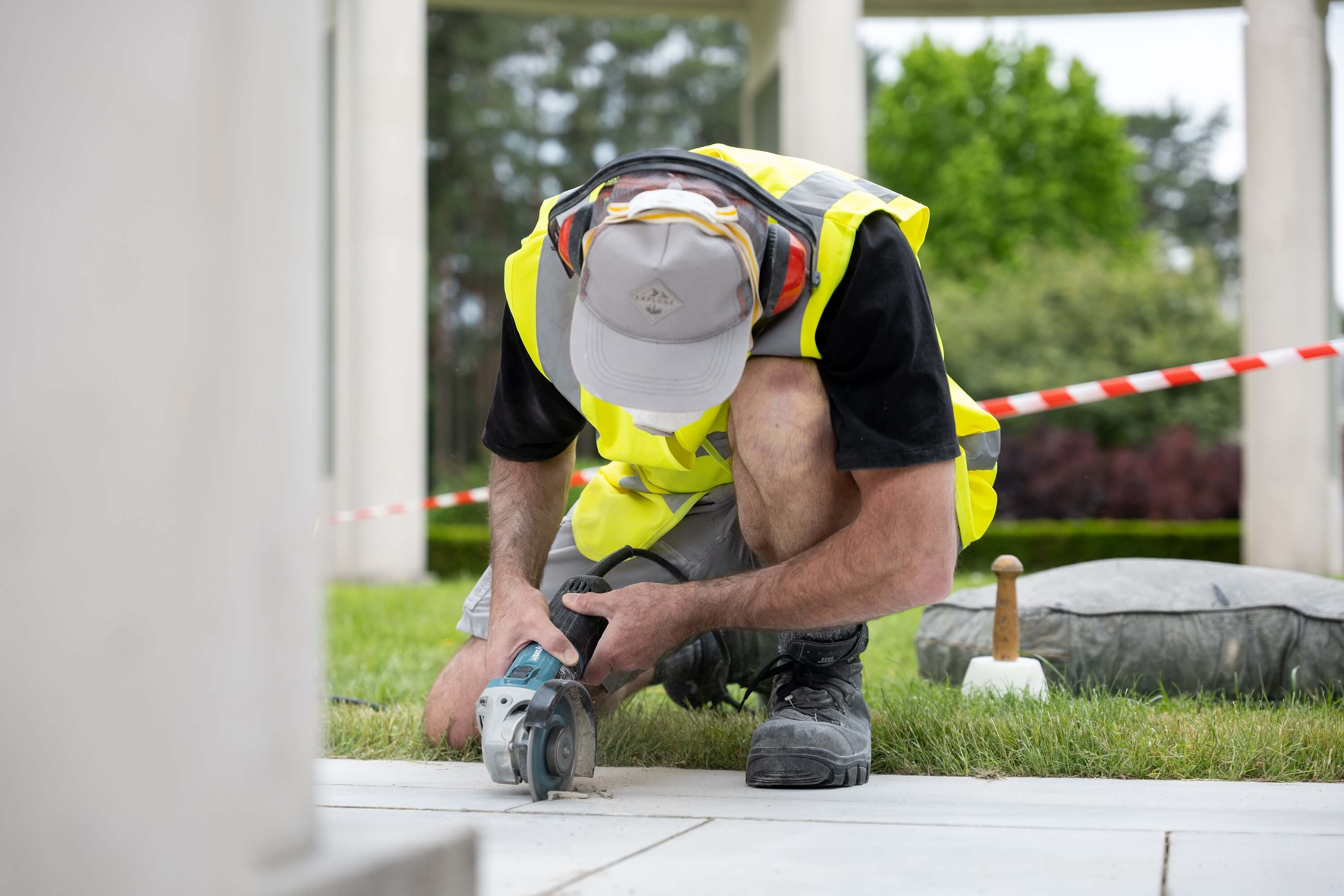 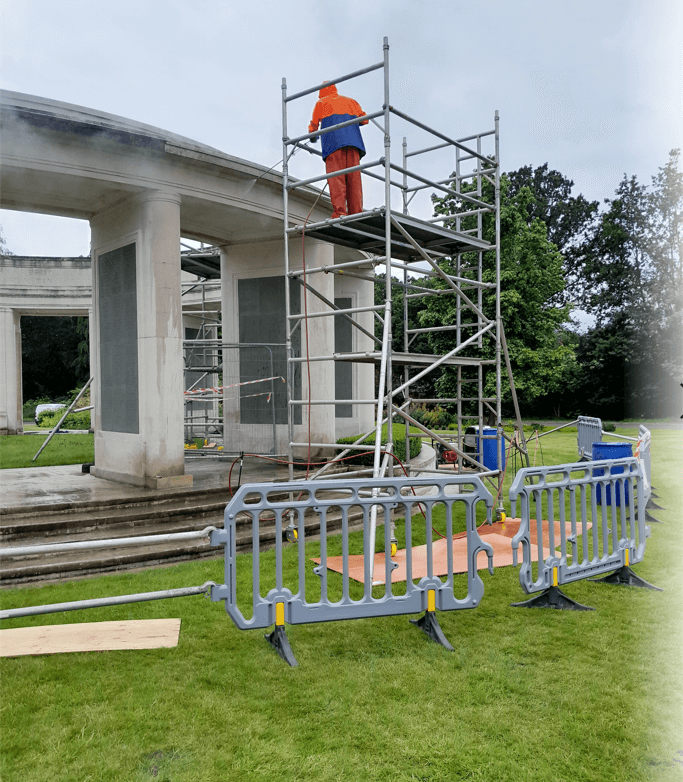 This work not only ensures the longevity of this great Memorial – which is Grade II Listed – but provides an opportunity for our skilled craftsmen to undertake conservation training. Whilst our approach to war commemoration hasn’t changed, we appreciate the passage of time and the imprint this leaves behind. I think if Hobday were alive today he would be proud of the work we have done and how his Memorial stoically commemorates the missing of World War Two.