The Forgotten Battle: The true story of the Battle of the Scheldt

The Battle of the Scheldt, focus of the film The Forgotten Battle, is one of Canada’s greatest actions of the Second World War.

We look at this often-overlooked operation and why it was so important for the final Allied Victory.

The Battle of the Scheldt 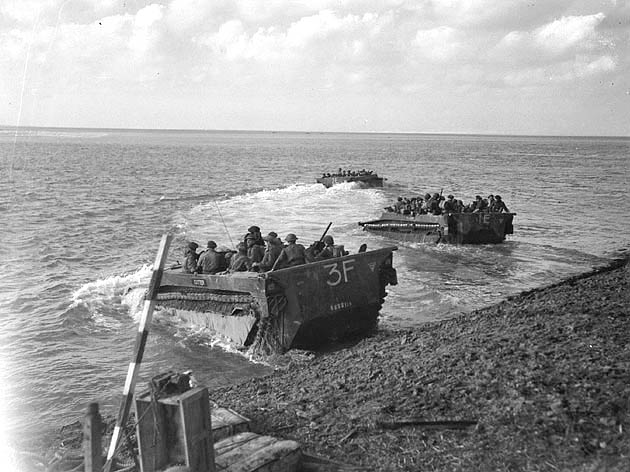 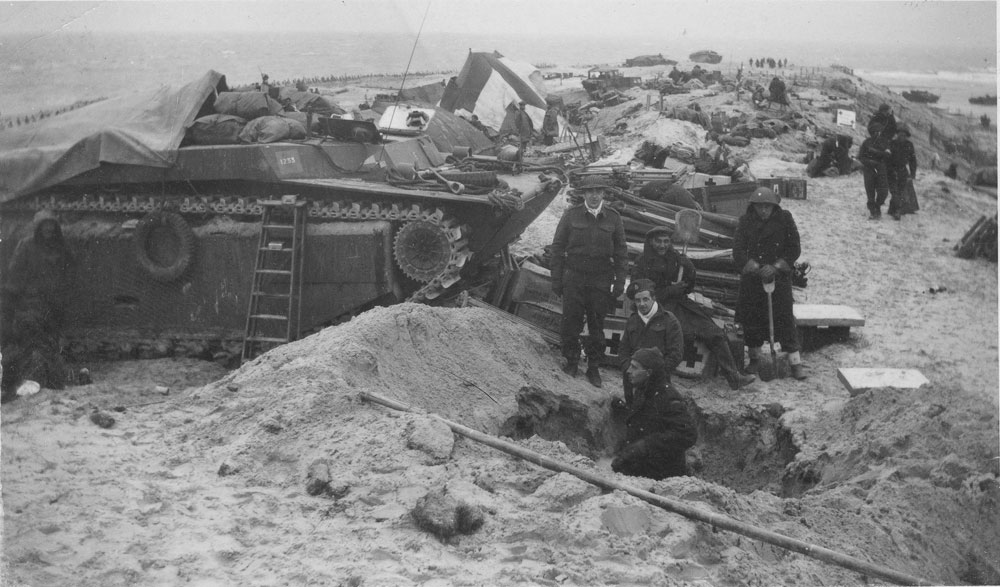 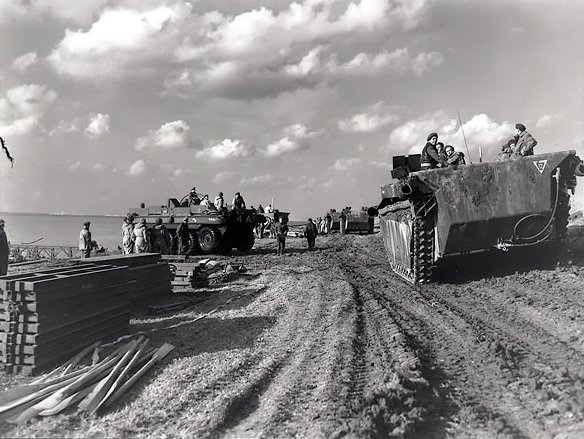 Image: Canadian vehicles pass each other on the way to the front lines (Wikimedia Commons).

The First Canadian Army under Lieutenant-General Guy Simonds spearheaded the Battle of the Scheldt.

Approximately 135,000 Allied soldiers took part in the battle, the bulk of which were Canadians with support from British, Polish, French, and American troops amongst others.

Against them were arrayed nearly 90,000 battle-hardened German soldiers, well dug-in on Walcheren Island and both shores of the Scheldt estuary. The waters were mined too. No Allied shipping could pass through.

Antwerp had been captured by the British on September 4th, 1944, but the area north of the port city had yet to be cleared. Resistance would be stiff.

The Battle of the Scheldt begins

This would be a grim, bloody battle, reminiscent of the grinding warfare that characterised the First World War: wire, fire, mud, and blood.

Driving rain, heavy defences and landmines made the Canadian advance very difficult when the offensive began on October 2nd.  By the 6th, an attack on the Dutch town of Woensdrecht, the offensive’s first objective, stalled.

Fighting raged for over a week, leading to Black Friday – one of the darkest, most vicious days of the whole Scheldt offensive. 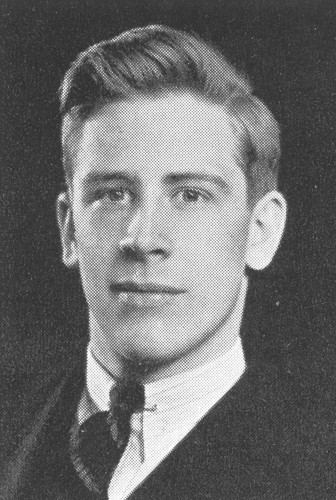 The men of the Canadian Black Watch, including Major Douglas Chapman, attacked across an open field near Woensdrecht ominously called “The Coffin” under Operation Angus.

Major Chapman and his men came under heavy fire almost immediately. Mortar, artillery, and machine gun fire rained down on the Canadians, forcing them back to their original starting area. There was no cover to speak of with the scene invoking Great War battles like Passchendaele or the Somme.

Casualties were heavy. By the end of Black Friday, 56 of the 145 members of the Canadian Black Watch would be killed, Major Chapman amongst them. A further 27 were wounded or captured.

Woensdrecht was eventually captured on the 16th of October through a combined mixture of air support and Canadian grit when the Calgary Highlanders moved in.

This essentially sums up the whole Scheldt campaign: the Canadians taking heavy blows, before winning through, thanks to their skill, determination, and heroism.

The battle rages on…

The Scheldt would grind on for the rest of October into early November. Tens of thousands of experienced, well-fortified enemy soldiers still had to be dislodged from key positions like the Breskens Pocket and Walcheren.

Operation Switchback saw the Canadian 3rd infantry, supported by amphibious vehicles and WASP flamethrower carriers, overcome their adversaries, clearing the pocket by October 21st. This was followed up by the hard-fought Operations Vitality and Infatuate, resulting in German surrender by November 8th. 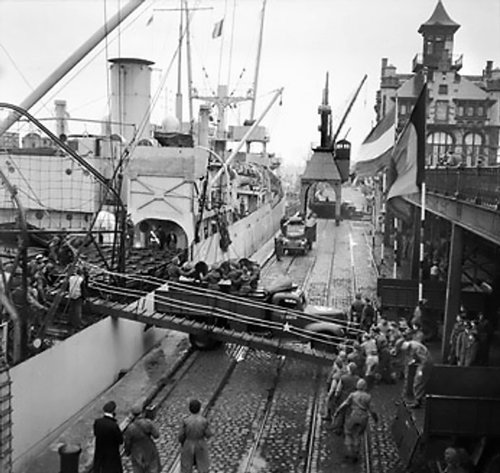 With German positions cleared, and mines removed from the river, shipping could start heading into Antwerp. The first convoys arrived in the port on the 28th of November. Fittingly, the first to dock was Fort Cataraqui – a Canadian-built, Canadian-manned vessel.

The Battle for the Scheldt was over. The liberation of The Netherlands and Belgium was one step closer.

Fighting in the region resulted in nearly 13,000 Allied casualties. Of the total killed, captured, wounded, or missing, over half were Canadian.

The Scheldt campaign has come to define the Canadian effort during the Second World War. Unfortunately, they are often overlooked, but their skill at arms and determination cannot be underestimated.

Why was the Scheldt battle so important?

For the forces fighting across Western Europe, one of the biggest enemies wasn’t necessarily the German armed forces. It was logistics.

Securing strong, manageable supply lines is one of the most fundamental parts of warfare. Keeping the army fed, fuelled, and fit for fighting is essential for achieving victory.

By July 2nd alone, over 560,000 tons of supplies, 170,000 vehicles, and a million Allied soldiers had been moved to Europe. Over 500 miles of territory had been captured by the end of August. That gives you some idea of the scale the war’s logistical challenge the Allies were facing.

While a Herculean effort had already been undertaken to keep Allied armies supplied, ports were needed to keep the material flowing. Capturing a functional port was vital. This became one of Supreme Allied Commander General Dwight D. Eisenhower’s top objectives as the post-D-Day push into Europe drove on.

With the French channel ports basically becoming fortresses on their own right, the focus of Allied military planners turned elsewhere.

Antwerp, the second-largest European port, was captured by the British 11th Armoured Regiment on September 4th, 1944. 90% of Antwerp’s facilities were still intact.

The battle of the Scheldt meant the Allies could open the sea lanes into The Netherlands and Belgium.

The Canadians’ tenacity, fighting spirit, and sheer heroism meant hundreds of thousands of tons of much-need supplies could get into Europe and fuel the continent’s final liberation.

Commonwealth Cemeteries of the Battle of the Scheldt

We commemorate the Canadian war dead from the Battle of the Scheldt at numerous locations throughout Belgium and The Netherlands.

We have previously hosted royal visits to some of our sites that hold Scheldt combatants. Her Royal Highness Princess Margriet of The Netherlands visited Groesbeek Canadian War Cemetery in May 2021, for instance, to mark the opening of the Faces of Groesbeek photo exhibition.

However, the Canadian soldiers from the Scheldt primarily rest at the below cemeteries:

Bergen-op-Zoom Canadian War Cemetery contains approximately 1,120 Commonwealth burials of the Second World War. Major Douglas Chapman, mentioned earlier, rests here, along with many of his men who fought and died during the Scheldt campaign.

The men who lie in the Adegem Canadian War Cemetery are primarily those who fell fighting to clear the Scheldt’s southern banks. It is also home to many other Canadian servicemen who fought in other key World War Two operations with over 1,100 soldiers buried here.

You can find more Canadian casualties from the fighting north of Antwerp in the Schoonselhof Cemetery. Of the roughly 1500 Commonwealth burials that reside at Schoonselhof, about 350 are Canadian, representing those who fell during both the First and Second World Wars. 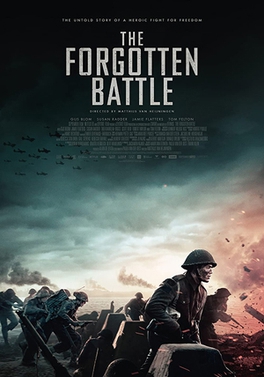 The experiences of the Canadian forces on the Scheldt have now been immortalised in the Netflix film The Forgotten Battle. We’re doing our little bit to keep the memories of those who fell during the battle alive too through our commemorative work.

Discover more information on the records we maintain on our Canadian casualties and all our commonwealth burials via our Find Records tool.

This opens up the CWGC database to you. You can take a look at the records of our Canadian war dead to find more information on those who fell during the Scheldt campaign. You can also browse our archives, search for World War Two service records, and much, much more.

Our latest blogs
Blog
Remembering the revolutionary Battle of Cambrai 105 years on
Blog
In the Line of Duty: Remembering the Great War's fallen Generals
Blog
Taking the field: Footballers who died in the World Wars
Read more blogs
Share this on
Tags Battle of the Scheldt The Forgotten Battle