105 years on from the bloodiest day in British military history, the fallen of the Somme’s names continue to live on. We are undertaking large-scale restoration to the Thiepval Memorial, the iconic monument in Northern France that bears the names of more than 72,000 missing men of the First World War.

It commemorates British and South African forces killed in the area and is one of the most visited CWGC sites in the world. On the first day of the Battle of the Somme (1 July 1916) almost 20,000 men under British command died. By the time the battle was over, 141 days later, more than a million people on all sides were killed, wounded, or went missing.

For the British and South Africans with no known grave the Thiepval Memorial stands in their honour.

Claire Horton CBE, Director General of CWGC, said: “The Battle of the Somme remains one of the most powerful reminders of the cost of war, and 105 years later we continue to remember the fallen.

“The scars of battle have all but disappeared and the cemeteries and memorials of the CWGC are some of the last reminders in the landscape of what happened. For the missing, the iconic Thiepval Memorial serves as their legacy, all 72,000 of them. We remain committed to preserving their memory through this iconic piece of architecture.

“This is a hugely complex project, requiring incredible attention to detail. Every single name is being checked, one by one, and restored if needed. Behind the scenes, structural improvements are being made to ensure this vital piece of Commonwealth history can survive for future generations.” 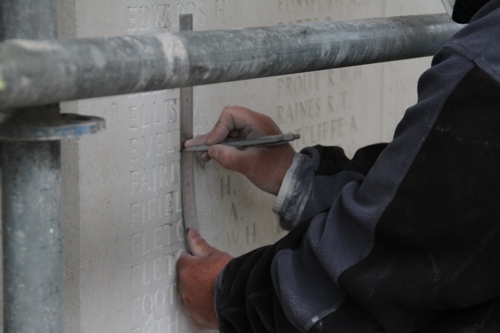 The memorial has been closed to the public since March 2021 when the restoration began. An intricate shell of scaffold now surrounds the commanding arches, designed by Sir Edwin Lutyens, allowing workers to inspect and restore the stonework up close. 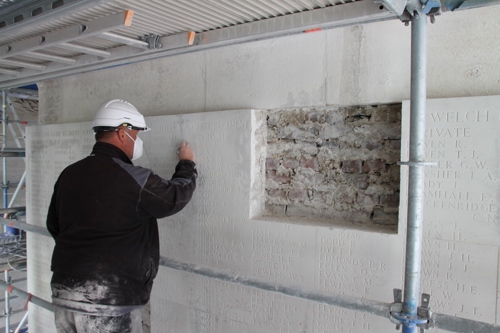 From platforms they will examine every single one of the 72,000 names, line by line, re-engraving by hand and fixing the stonework where needed as they go. Where deterioration is more serious new Portland panels will be installed.

Inside the memorial, improvements to the complex network of drainage pipes will reduce the impact of water damage and thousands of brick ties will secure the external layers to the inner structure.

Finally, the paving under the memorial will be repaired and repointed.

Work is due to be complete by June 2022. For those still able to visit the site, a digital exhibition – In the Shadow of Thiepval – can be accessed by smart phone or tablet, telling the story of the memorial, the Battle of the Somme and the men who fought and died there.