This is the final resting place of over 1,000 servicemen and women who lost their lives as a result of service in the two world wars. It is one of just eight sites in the UK with such a large number of war graves.

During the Second World War, General Service and the Air Force plots were established for the burial of casualties from the air force stations set up in the eastern counties during the war. These included Bomber Command bases in Lincolnshire and fighter stations in Norfolk and Suffolk. By the end of the Second World War over 800 service personnel had been laid to rest here. A Stone of Remembrance, which was unveiled by Marshal of the Royal Air Force Lord Tedder in July 1951, stands near the centre of the Air Force plot at this war cemetery.

Cambridge City Cemetery is the final resting place of over 1,000 servicemen and women who lost their lives as a result of service in the two world wars and is one of just six sites in the UK with such many war graves. Over 180 of the burials here date from the First World War, when No. 1 Eastern General Hospital was located in Cambridge. The hospital came under the command and administration of the Territorial Force and initially provided 520 beds for sick and wounded servicemen who had been invalided back to Britain from one of the overseas theatres of war. By 1917, the number of beds had increased to almost 1,200 for both officers and men and the hospital occupied several different sites across the city, including parts of King’s College, Clare College, Trinity College, and the Leys School. Huts and tents were erected on playing fields and other open spaces to house patients and medical staff. Once men had been assessed and treated in the general hospital they were often transferred to a ward in an auxiliary hospital, such as Addenbrooke’s, which had 70 beds reserved for military use.

Among the First World War servicemen buried here are 21 Australians who lie near the Cross of Sacrifice in the Dominion plot, along with 14 Canadians, one South African and a small number of Britons. A second First World War plot, sited on the northern boundary of the cemetery, contains most of the remaining British war dead. The memorial cross in this plot was designed and erected by private subscription.

The cemetery contains more than 830 service burials dating from the Second World War, of which three are unidentified. Royal Air Force stations were established throughout the eastern counties over the course of the war and the vast majority of the servicemen buried here were RAF personnel. Many of these were laid to rest in the large Air Force plot, which was formed in 1942. Over half of the Second World War dead came from Commonwealth countries other than Britain, including Australia, Canada, New Zealand, India and South Africa. The Stone of Remembrance, reserved for cemeteries with over 1,000 Commonwealth war burials, was unveiled in the Air Force plot in July 1951 by Lord Tedder, Marshal of the Royal Air Force. 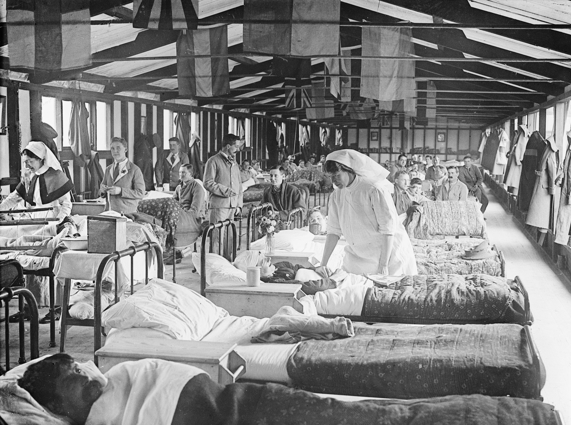 Patients and nurses in a ward of the Eastern General Hospital located in a hut on the playing fields of King’s and Clare colleges during the First World War. © IWM Q 30306 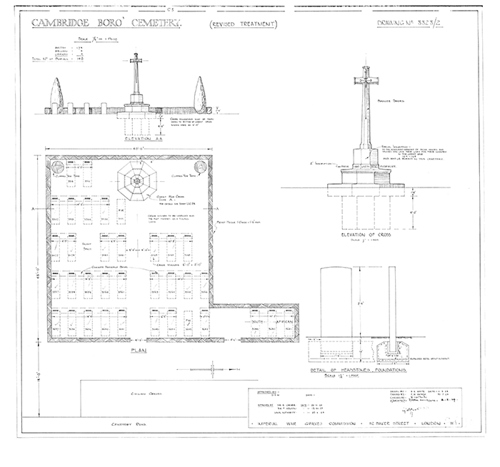 Cambridge City Cemetery, like many larger cemeteries in the United Kingdom, has separate plots for First and Second World War dead, as well as a number of scattered graves. In this case however, the cemetery has two distinctive plots for First World War servicemen – a British plot and a Dominion plot. The decision to split the casualties by nationality was taken by the military authorities at the time.

This architectural plan for the cemetery, produced in 1923 and approved by Sir Robert Lorimer and Sir Frederic Kenyon in 1924, shows the Dominion plot. Both draughtsmen involved in producing the drawing had served in the war, F.W. Mathew as a corporal in the Labour Corps and Edward Arthur White as a private in the Machine Gun Corps.

The plot, with its Cross of Sacrifice and surrounding privet hedge, as can be seen in this photograph from 1929  looks not too dissimilar to a typical Commission cemetery in terms of its treatment. 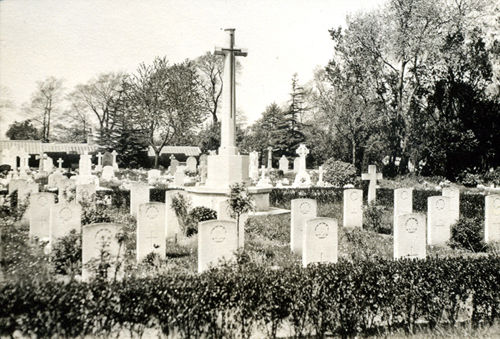 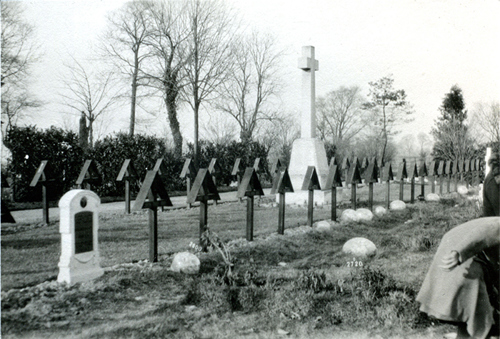 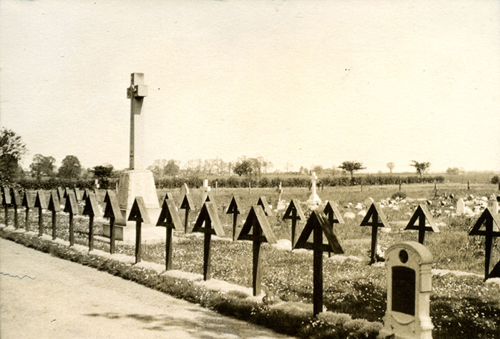 These two photographs, taken in 1928 and 1929 by the IWGC Controller and Financial Adviser Sir Herbert Ellissen, show the British plot in the cemetery. What is immediately noticeable is that apart from the grave of the Belgian soldier, all the other war graves are marked by wooden crosses rather than the standard Commission headstones. In addition, the large memorial cross in the plot is not a CWGC Cross of Sacrifice, but one of a different design which was erected by public subscription, and on which the names of those buried in the plot had been added.

When Ellissen visited the cemetery in 1929, he commented:

"This cemetery still presents a curious contrast in the treatment of the British and Dominion soldiers' graves and the presence of the Commission headstone just outside the British Plot with its wooden crosses accentuates this now more than formerly." 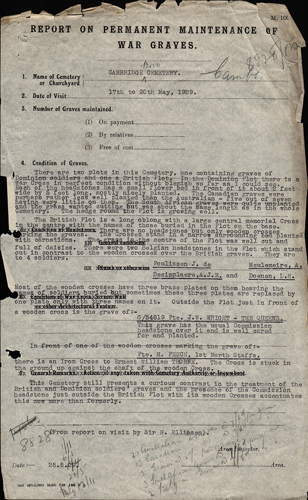 It wasn’t until the 1930’s that the Commission received permission to replace the wooden crosses with permanent headstones, although as a result of the time that has passed, it is noticeable how few of the headstones in this plot have personal inscriptions.

Flowers and plants have always been an important element in most Commission cemeteries and plots, both in terms of horticultural work undertaken by Commission gardeners, and with regards to flowers left or planted by visitors to the graves of loved ones. Cambridge City Cemetery is no different. Over the years the CWGC has received many letters from friends and relatives of the war dead, requesting to place or plant certain plants on the war graves in the cemetery. On some occasions the Commission was able to permit such requests, while on others they would have to sympathetically turn down the request, as can be seen in this letter from the CWGC Principal architect Sir Edward Maufe concerning a request from a family to plant a tree on their daughters grave: 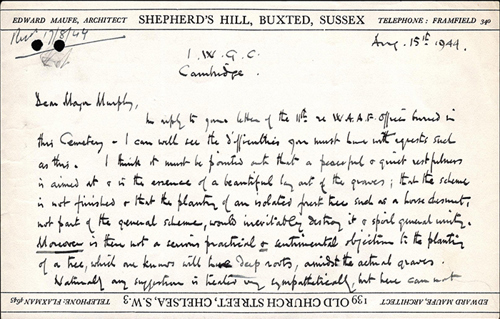 "I think it must be pointed out that a peaceful & quiet restfulness is aimed at & is the essence of a beautiful lay out of the graves; that the scheme is not finished and that the planting of an isolated forest tree such as a horse chestnut...would inevitably destroy it" 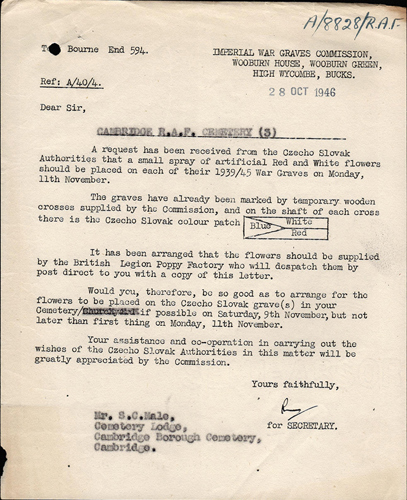 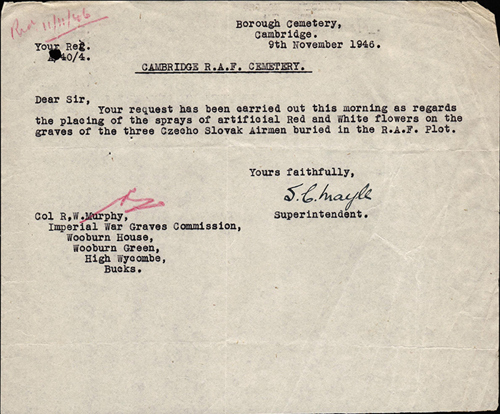 Other requests could be more easily dealt with. In 1946 the CWGC was asked by the Czechoslovak authorities to arrange for the placement of small sprays of red and white artificial flowers on the graves of any Czech casualties in the cemetery, and this was duly arranged. 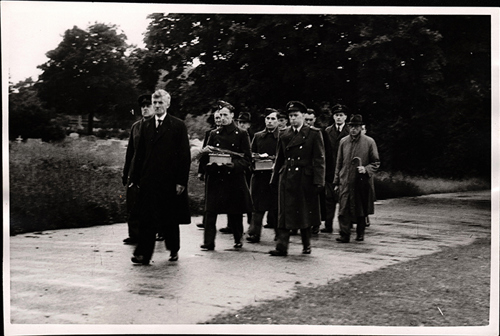 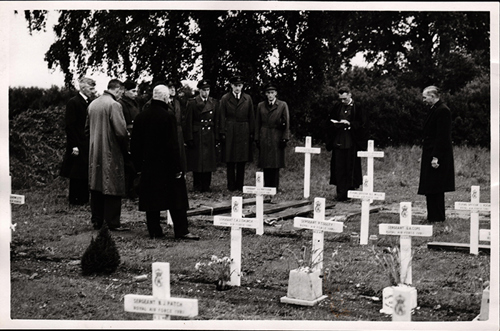 These two photographs record the burial service for Pilot Officer Leslie McDonald Rawlings and his brother Flight Lieutenant Raymond Charles Rawlings, DFC, both of the Royal New Zealand Air Force, which took place in Cambridge City Cemetery on 12th June 1946. Leslie had been killed in a flying accident in East Lothian, Scotland on the 31st August 1943, while Raymond was killed, also in a flying accident, just over a month later in Kirkby. Their remains had been cremated soon after their deaths, and it appears that their family hoped that this would mean that they would be able to bring their remains back to New Zealand. Upon learning that the principle of non-repatriation of remains still applied, the family sought to ensure that the brothers could at least be buried together, and initially looked to have them buried in Market Harborough Cemetery, where the two sets of ashes were being kept in the cemetery chapel. It was at this point that the Commission contacted the family and offered them the option to have the brothers buried side by side in the RAF plot in Cambridge, which was accepted.

Some weeks after the burial service, IWGC Assistant Area Inspector Flight Lieutenant Joseph Francis Flynn, who had been liaising directly with the family, received a letter from the Leslie and Raymond’s uncle: 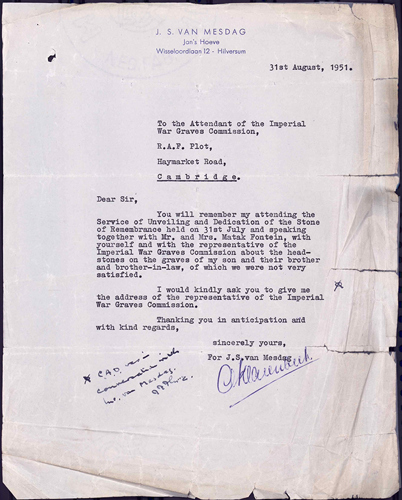 "On behalf of the father, brothers and sisters of the two boys I thank the Imperial War Graves Commission, and you personally, for all you have done and for the sympathy and kindness you have shown. Mrs. Copelin joins with me in asking you to accept our personal thanks for your arrangement of the last tribute that can be paid to these two brothers"

In 1942 the Air Ministry suggested that a special plot might be set aside in the cemetery for the burial of Royal Air Force, Dominion and Allied Air Force personnel. As a result, Cambridge City Cemetery became one of 6 regional cemeteries in which large plots were set aside for this purpose.

Sir Edward Maufe, as the Commission’s Principal Architect for the United Kingdom, was responsible for the final design of the plot once the war had ended. 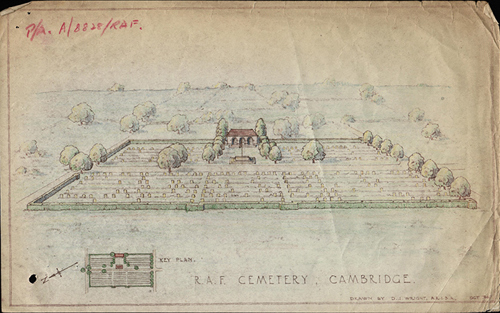 This perspective drawing, from October 1947, show Maufe’s original idea for the site, including a Stone of Remembrance "in the centre of the very large blocks of graves". A shelter building was also considered essential "as this plot is far from the entrance to the cemetery" 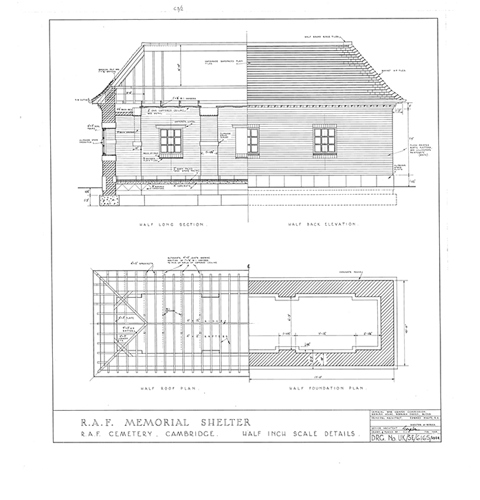 One thing that is missing from the drawing is a Cross of Sacrifice, which Maufe had

deliberately omitted, believing that the War Stone fitted better with his design. He was also aware that a Cross of Sacrifice had already been erected in the First World War plot in another part of the cemetery. However, when his plans were submitted to the Commission for approval the omission was noted by the Commission’s architectural adviser Sir Frederic Kenyon, who stated his preference for another Cross.

The Commission entered negotiations with the cemetery authorities, but they were unable to grant any additional land for the placing of the Cross, and in the end Maufe’s original suggestion won the day.

The RAF plot was officially unveiled on the 31st July 1951, a date that was chosen to coincide with the Festival of Britain celebrations in Cambridge which ran between the 28th July and the 19th August. 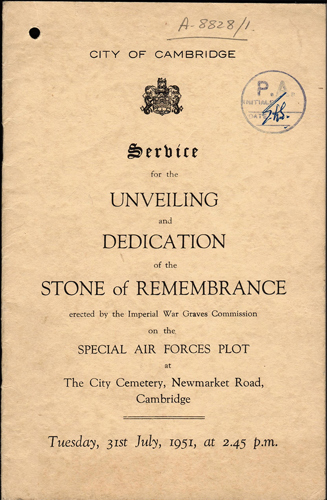 Over 1000 people attended the ceremony, including hundreds of relatives of those buried in the cemetery. The Stone of Remembrance was unveiled by Lord Tedder, Marshal of the RAF, and was dedicated by the Bishop of Ely.

The cemetery is known locally as Newmarket Road Cemetery, and the site is open daily between 07.00 and 19.00 hours. Before you visit we recommend you -