Lowestoft was the base of the Royal Naval Patrol Service (RNPS) and this memorial commemorates 2,400 men of the Patrol Service who have no grave but the sea.

The Lowestoft Naval Memorial commemorates nearly 2,400 men of the Royal Naval Patrol Service who died during the Second World War and have no grave but the Sea. The war memorial is situated to the north of the coastal town of Lowestoft, in a wooded garden, known as Bellevue Park. The memorial itself is on the edge of the cliff looking out across the foreshore and sea where in former years the men and vessels of the Royal Naval Patrol Service kept vigil.

During the First World War, Lowestoft’s fishing fleet volunteered or were drafted into the Royal Navy Reserve Trawler Section, the forerunner of the Royal Naval Patrol Service. The Royal Navy had identified the danger posed by mine warfare and identified Britain’s fleet of civilian fishing vessels and their crews as being ideally suited to the task of minesweeping. Crews were well used to manning lines and nets, and with their small agile vessels also capable of surviving in rough seas, now that the country was at war, instead of cod or sardines these men would be fishing for sea mines. Keeping Britain’s sea lanes open to merchant shipping was dangerous work, and casualties were high. The men of the Royal Navy Reserve Trawler Section (RNR(T)) who died during the First World War and have no known grave are commemorated on the three great naval memorials at Portsmouth, Plymouth and Chatham. 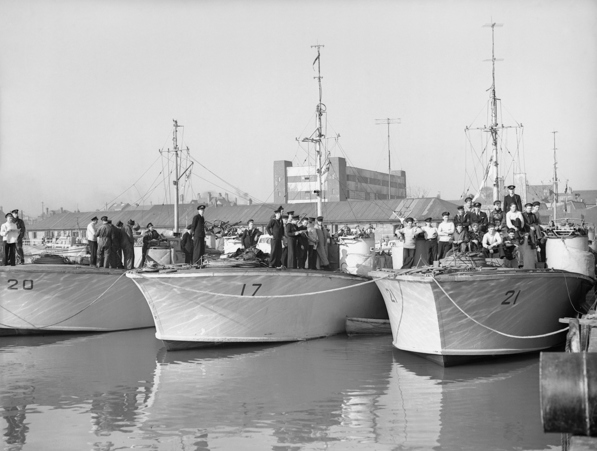 Motor gunboats docked at Lowestoft after their victory in the early hours of 8 March 1943, after engaging a group of German E Boats in the North Sea. © IWM A14911

At the outbreak of the Second World War, the Royal Navy took over most of the town of Lowestoft and its surroundings to establish five Naval Bases. As a large centre for the fishing industry the port could accommodate many small craft, and as a holiday resort the town had lots of accommodation. The former pleasure gardens, Sparrows Nest, situated just below Bellevue Park, became HMS Europa, the base of the Royal Naval Patrol Service (RNPS). Europa was the administrative headquarters for a service that grew to more than 60,000 men and about 3,000 ships. 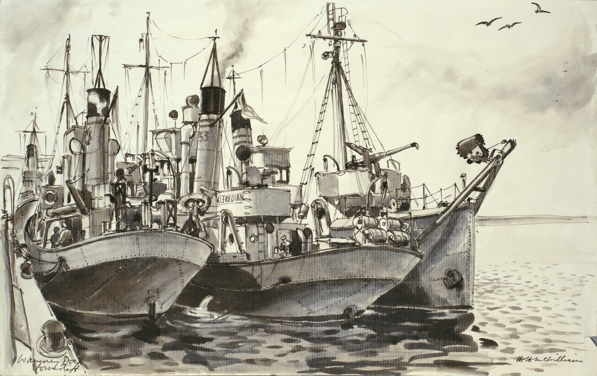 Initially comprised mainly of fishermen of the requisitioned trawlers and drifters used on patrol work, the RNPS would expand greatly to include men from all walks of life serving in many types of vessel including trawlers, whalers, corvettes, minesweepers and a multitude of other craft. Their job, like that of their predecessors in the RNR(T), was to patrol the coast and sweep the shipping lanes for mines, but expanded to include convoy duty and anti-submarine warfare. The RNPS served not just in home waters, but across the global; in the Arctic, the Mediterranean, the North and South Atlantic and in the Far East. 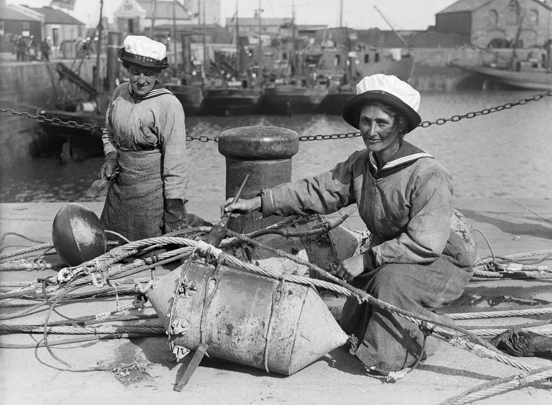 Two Women’s Royal Naval Service ratings sit in the sunshine on the quayside at Lowestoft to paint mines and steel floats, 1918. © IWM Q19649

Because it often used requisitioned civilian vessels, many of them elderly, the RNPS gained a number of nicknames such as "Churchill's pirates" and “Harry Tate's Navy", a reference to a popular music hall entertainer whose act involved his equipment gradually falling apart around him.  However, the men of the RNPS embraced these humorous descriptions, adopting the moniker “Harry Tate’s Navy” as their own.

During the Second World War, the RNPS lost 3,200 servicemen, almost 2,400 of whom were lost or buried at sea and are commemorated by the Lowestoft Naval Memorial. The Memorial was designed by F.H. Crossley and unveiled on 7 October 1953 by Admiral of the Fleet, Sir Rhoderick McGrigor. A copy of the Memorial Register is held at The Royal Naval Patrol Service Museum, located in the old HMS Europa building located a short distance from the memorial itself and well worth a visit to find out more about the Royal Naval Patrol Service.

The Naval Memorial is located to the north of the town alongside the A12 Yarmouth Road, approximately one mile north of the harbour. The memorial is in a prominent position within a local authority gardens, known as Bellevue Park. The park is on the top of the cliffs and the memorial itself is on the edge of the cliff so providing an unobscured view of the foreshore and sea.

Car parking in the area is restricted and it is best to park in North Parade and enter Bellevue Park by way of the footbridge. A copy of the Memorial Register is held at The Royal Naval Patrol Service Museum which is located a short distance from the memorial itself. Another copy of the Memorial Register is kept at the Town Hall reception and is available to view during office hours: 09:00 to 16:30 Mondays to Fridays (closed on Bank Holidays).