From Tennyson’s ‘Charge of the Light Brigade’ through to modern day verse, war and poetry are intrinsically linked, and never more so than during the world wars. Read on to discover famous remembrance day poems.

What poem is read on Remembrance Day?

The Ode of Remembrance is perhaps the most famous of the remembrance day poems.

The ode is a section of a longer poem, ‘For the fallen’ by Laurence Binyon. It was first published in The Times in 1914 shortly after the outbreak of World War One, when the first signs of the devastation of modern warfare were becoming apparent.

Binyon would go on to serve as a medical orderly in France during the war, and wrote many other books, plays and poems - most notably ‘The burning of the leaves’ about the London Blitz during World War Two - but it is ‘For the fallen’ that endures most. 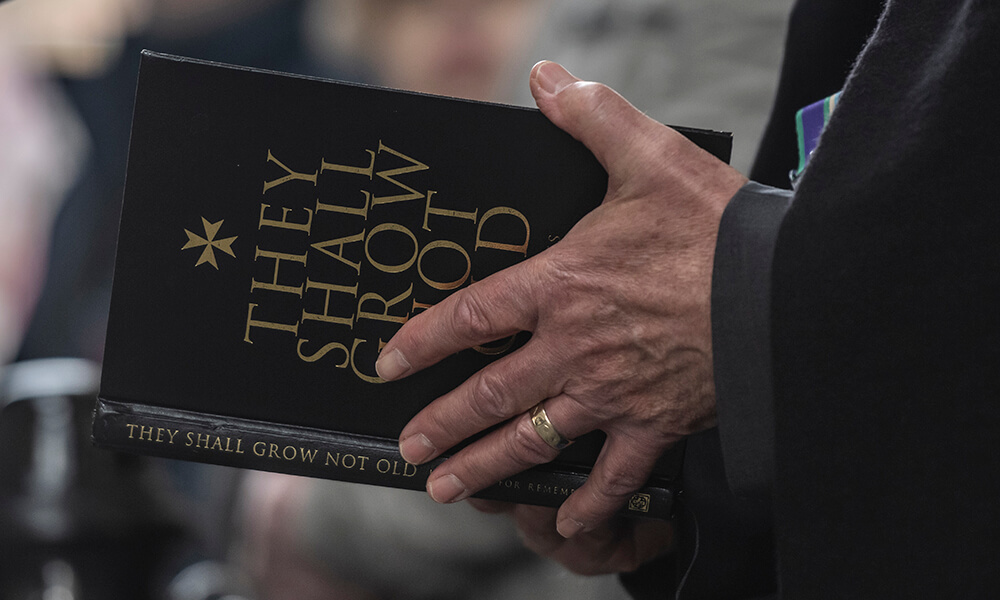 The Ode of Remembrance is the third and fourth stanza of ‘For the fallen’. While the opening stanza of the poem specifies England’s dead, the later stanzas have been adopted across the world as a general poem of remembrance.

The famous lines are spoken at Remembrance Sunday services, at funerals for the armed forces and other memorial services, including often as part of the Last Post ceremony at the Menin Gate.

They went with songs to the battle, they were young,

Straight of limb, true of eye, steady and aglow.

They were staunch to the end against odds uncounted;

They fell with their faces to the foe.

They shall grow not old, as we that are left grow old:

Age shall not weary them, nor the years condemn.

At the going down of the sun and in the morning

We will remember them.

And death shall have no dominion, Dylan Thomas

Dylan Thomas was born in October 1914 shortly after the beginning of World War One. Although he lived through World War Two, ‘And death shall have no dominion’ was written in the 1930s, before the war began.

Despite this, ‘And death…’ has become a popular remembrance day poem, as it speaks to the relationship between man and death.

Thomas argues that death is not the end, no matter the circumstances. In the first stanza he talks of “bones are picked clean and the clean bones gone” who will have “stars at elbow and foot,” suggesting that no matter how long after death, the dead will live on in the afterlife.

The stanza ends with:

Though lovers be lost love shall not;

And death shall have no dominion.

In this, Thomas suggests that as long as those that are passed are remembered and loved, then they are not truly gone - a fitting reason for the continued remembrance of those who paid the ultimate sacrifice more than 100 years ago.

Much of the most famous war poetry was written during and about the First World War. Still today these poems are studied at schools around the world, and the likes of Wilfred Own and Siegfried Sassoon are remembered long after their deaths.

Not all WW1 poems are remembrance poems, but many share the same themes and motifs.

Rudyard Kipling lost his only son John in September 1915 during the Battle of Loos. Initially he was listed as missing in action, and his grave was not identified until decades after Rudyard Kipling’s own death.

In 1916, shortly after the loss of his son, Kipling published ‘My boy Jack’. While the poem is ostensibly about the death of 16-year-old Jack Cornwell VC who died while serving aboard HMS Chester at the Battle of Jutland, Kipling’s own experiences with his son will have affected its writing, further magnified by the similarity of the names Jack and John.

Aside from the last, each stanza of the poem opens with the question of a bereaved parent, firstly asking for news of their child, before searching for comfort to sooth the loss of their son.

The poem answers that there is no comfort other than the knowledge that the son died doing his duty for his country:

Except he did not shame his kind—

Not even with that wind blowing, and that tide.

Then hold your head up all the more,

Because he was the son you bore,

And gave to that wind blowing and that tide!

Despite the advances in technology and society, the men and women who serve in our armed forces today are very similar to those who volunteered to serve more than 100 years ago. Like the poets of 100 years ago, poetry is still used as a method of remembrance.

We who remain, Anthony Devanny

While serving in The Yorkshire Regiment, and having just returned from a third tour of Afghanistan, Devanney wrote ‘We who remain’ in honour of the comrades he’d lost in service.

Devanney’s writing shares some of the hallmarks of some of the most well known remembrance day poems. In a manner reflective of Dulce et Decorum Est, the poem begins with the latin motto of the Duke of Wellington: ‘Virtutis fortuna comes’ (Fortune is the companion of virtue) as Devanney explains that there both “the lucky and unlucky ones” who have to live with the survivors guilt that comes with returning home from a war when others did not.

The last lines of the poem evoke another of the famous remembrance poems, quoting directly from the Ode of Remembrance.

As We are the ones who will always remember those we forever call friend.

'We who Remain' accompanied a £5 commemorative coin released for Remembrance Day 2015.

From Melville’s White Whale in Moby Dick to tales of smugglers and pirates, the sea has provided a fantastic canvas for all forms of artistic expression. Compared to the poets of the land armies of the world wars, there is a scarcity of naval poetry, however verses full of action, adventure, loss and grief on the open seas can easily be found.

To the boys lost in our cruisers, Edward Hilton Young

‘To the boys lost in our cruisers’ is a remembrance of the sailors of the Royal Navy, written by Edward Hilton Young, himself a commissioned officer serving in the Navy during World War One.

‘To the boys…’ was written in 1914, while Young was serving aboard the dreadnought HMS Duke, part of the Grand Fleet at Scapa Flow. Aged 35 at the time, Young must have seen boys and young men signing up for service at sea when war was declared. His first stanza speaks of these youths, killed too soon:

Others bring much, but these had most to bring ;

all hope, all dreams, life left an unrun race ;

for that has death, the just and gentle king, now set them first in place.

The second of two stanzas is a short message of remembrance, exhorting the bravery of the men who served, with a reminder of why it was important that they made the ultimate sacrifice.

Sea-children ! Still, by quiet copse and close, safe through your service, other children play

Dear brothers are you now to all of those, for whom you died that day.

It is likely that the poem was written in response to the action of 22 September 1914, where three Royal Navy cruisers were sunk by U-9, a German submarine. Close to 1,500 sailors lost their lives, and the majority could not be recovered, with more than 1,200 commemorated on Chatham Naval Memorial.

One of the most famous of all the poetry of World War One is ‘The Soldier’ by Rupert Brooke. It consists of two stanzas that commemorate the death of a soldier away from home.

Written in the first-person, it is a prescient look at his own death, and its first lines are some of the most well known in British poetry:

If I should die, think only this of me:

That there’s some corner of a foreign field

That is for ever England.

The poem is a different view of remembrance. Written early in the war, the tone and language evoke patriotism, honour and duty; a strong contrast to the likes of Wilfred Owen’s  ‘Dulce et Decorum Est’ and other poems of the latter years of the war which paint a more realistic picture of the horrors of war.

Fittingly, perhaps, Brooke was buried on Skyros, an island off the coast of Greece, in an isolated grave, in a corner of a foreign field which is forever England.

The Poppy has become the enduring symbol of Remembrance. Inspired by John Mccrae’s famous poem ‘In Flanders Fields’ the American War Secretary Moina Michael brough poppies to sell to have friends to try and raise money for the servicemen returning from World War One.

This was adopted by the American and British legions, and now poppies are sold every year to raise money for the armed forces community.

Lieutenant-Colonel John McCrae was a Canadian medical officer serving on the Western Front during World War One.

A keen poet and author, he wrote his most famous poem ‘In Flanders Fields’ in May 1915, after a close friend had died during the Second Battle of Ypres.

The distinctive red and black poppies were renowned for growing on the broken earth of the battlefields of France and Belgium, and McCrae speaks of them in the opening stanza of his most well known work:

In Flanders Fields, the poppies blow

Between the crosses, row on row,

That mark our place; and in the sky

Scarce heard amid the guns below.

The poem itself is a remembrance of the dead, but a call to arms for the next wave of soldiers on the front lines:

Take up our quarrel with the foe:

To you from failing hands we throw

The torch; be yours to hold it high.

McCrae died later in the war while serving in France and is buried at Wimereux Communal Cemetery, but his legacy lives on with the sale of poppies each year to raise money for armed forces veterans and their families.

Commemorating the poets of The Great War

To celebrate World Poetry Day, we’ve taken a look at some of our favourite First World War poets commemorated by the Commonwealth War Graves Commission and their most famous works.

Read Commemorating the poets of The Great War
Our latest blogs
Blog
Remembering the revolutionary Battle of Cambrai 105 years on
Blog
In the Line of Duty: Remembering the Great War's fallen Generals
Blog
Taking the field: Footballers who died in the World Wars
Read more blogs
Share this on
Tags Remembrance