The Cemeteries and Memorials of Passchendaele more than 100 Years On

104 years ago on the 31 July 1917, the 3rd Battle of Ypres (Passchendaele) began. Over the next 103 days of fighting in Belgian Flanders hundreds of thousands of soldiers on both sides would die. We cannot begin to imagine what these men and women went through, but photographs can provide us a unique window into their harsh world of mud, shell holes and barbed wire. 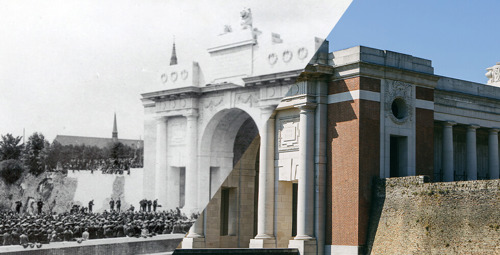 104 years on from this terrible battle, we’ve brought together a selection of remarkable photographs of our cemeteries and memorials – then and now – to give you a glimpse into the past and to showcase how today we continue to preserve the final resting places of the fallen of Passchendaele.

Unveiled in 1927, the Ypres (Menin Gate) Memorial commemorates more than 54,000 British, Canadian, Australian, South African and Indian servicemen who died in Belgium during the First World War and have no known grave.

Every evening the Last Post is played at the memorial. It is a remarkable tribute from the people of Ieper (Ypres) to those who lost their lives in the Great War. Today, the memorial is visited by thousands of people who come from across the world to pay tribute or find the name of an ancestor.

The Menin Gate under construction after the First World War.

The final resting place of nearly 6,000 Commonwealth servicemen, many of them unidentified, Hooge Crater Cemetery is in a part of the Ypres Salient that saw almost constant fighting during the war.

Nine kilometres from Ieper (Ypres) is CWGC’s largest cemetery anywhere in the world. Almost 12,000 individuals lie at rest in Tyne Cot Cemetery and a further 35,000, who have no known grave, are commemorated on the never-ending panels which make up the Tyne Cot Memorial. Almost all these missing men died during the 103 days of the 3rd Ypres Offensive.

Hidden amongst the trees in Polygon Wood is Buttes New British Cemetery where more than 2,100 service personnel now lay at rest. In September 1917, Australian forces took and held the shell blasted remains of the wood at a terrible cost. Today, if you walk around the cemetery you can see that many of the headstones bear the rising sun cap badge of the Australian Imperial Force.

As the 3rd Ypres Offensive drew to a close, the weather slowly got worse making fighting harder by the day. Despite this, Canadian forces launched attacks on the village that would give its name to the whole offensive - Passchendaele.

Today, Passchendaele New British Cemetery, constructed on the outskirts of the ruins of the nearby village, is the final resting place of more than 500 casualties, many of whom died in the fighting for the now rebuilt village.

A burial party at work in Passchendaele New British Cemetery.