Around the world, the Commonwealth War Graves Commission (CWGC) commemorates the fallen of the Commonwealth forces who died during the two World Wars. Some of our sites are small and intimate, with only a handful of graves, others are vast and dramatic, with many thousands of headstones. But the largest Commonwealth War Cemetery maintained by the CWGC today is Tyne Cot Cemetery in Belgium. 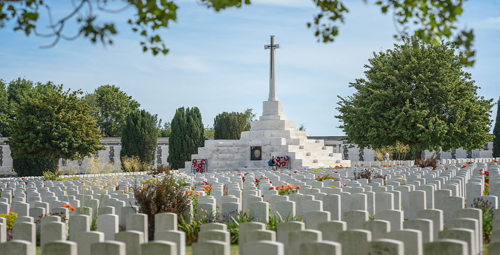 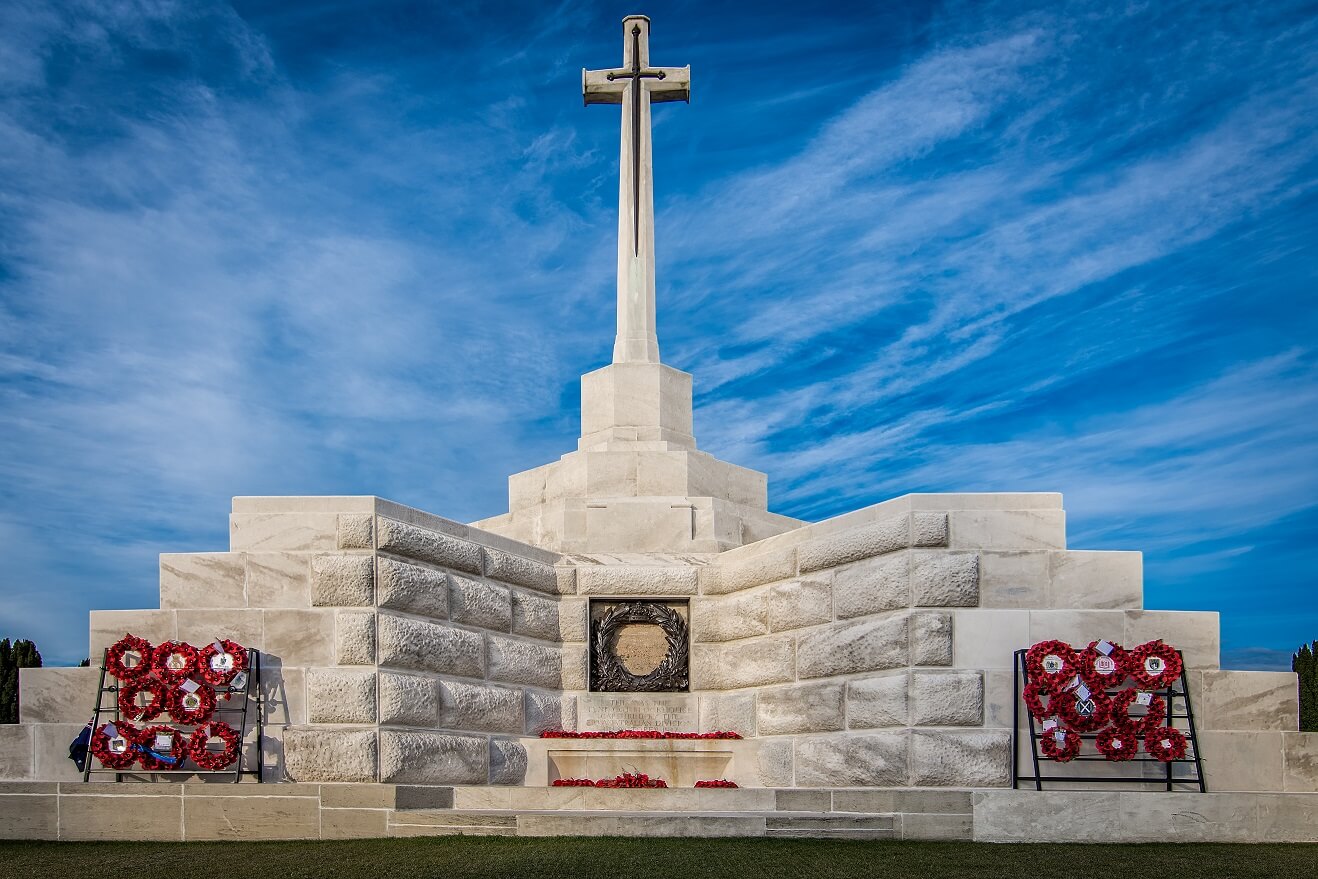 Cross of Sacrifice in Tyne Cot 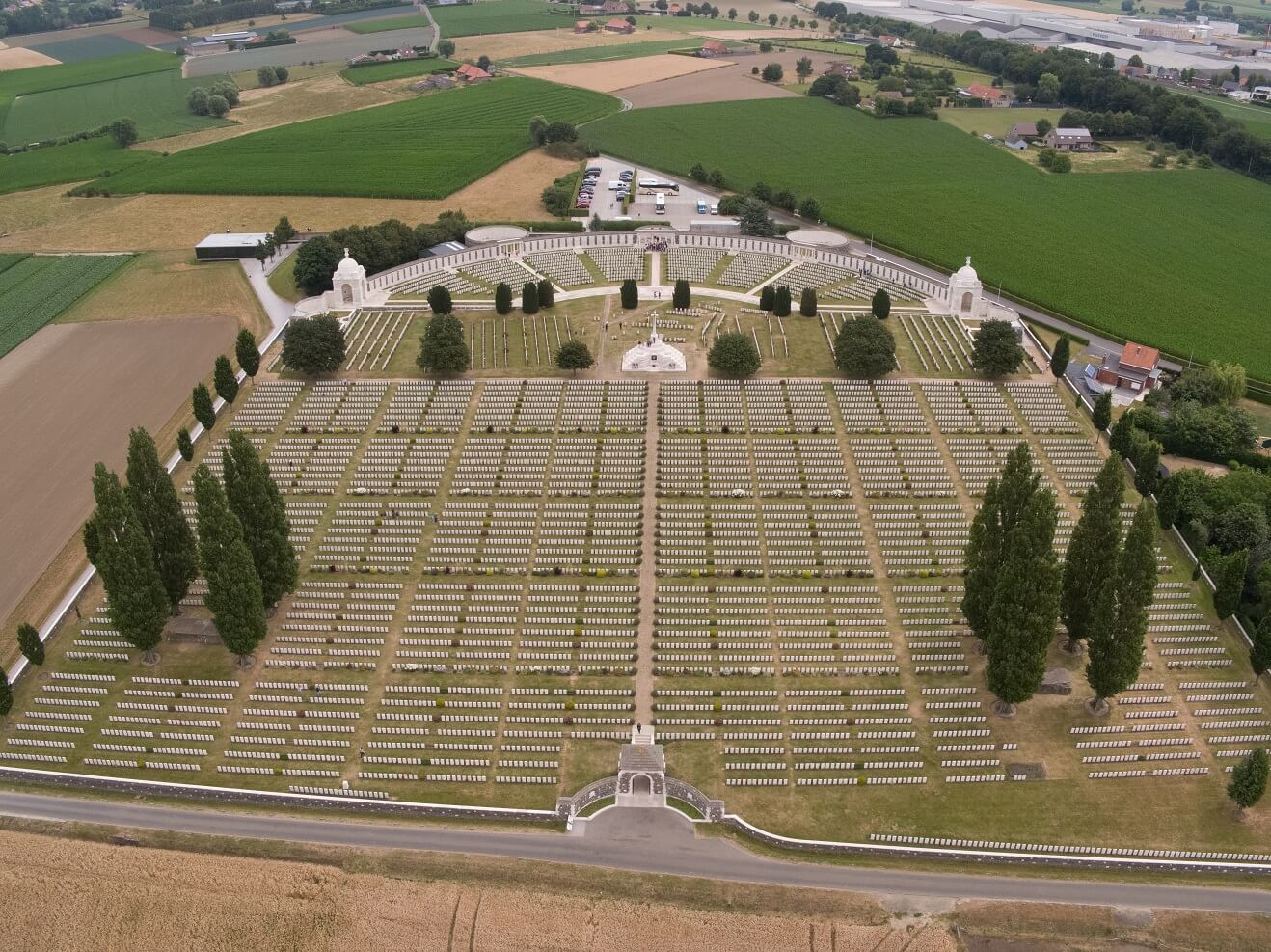 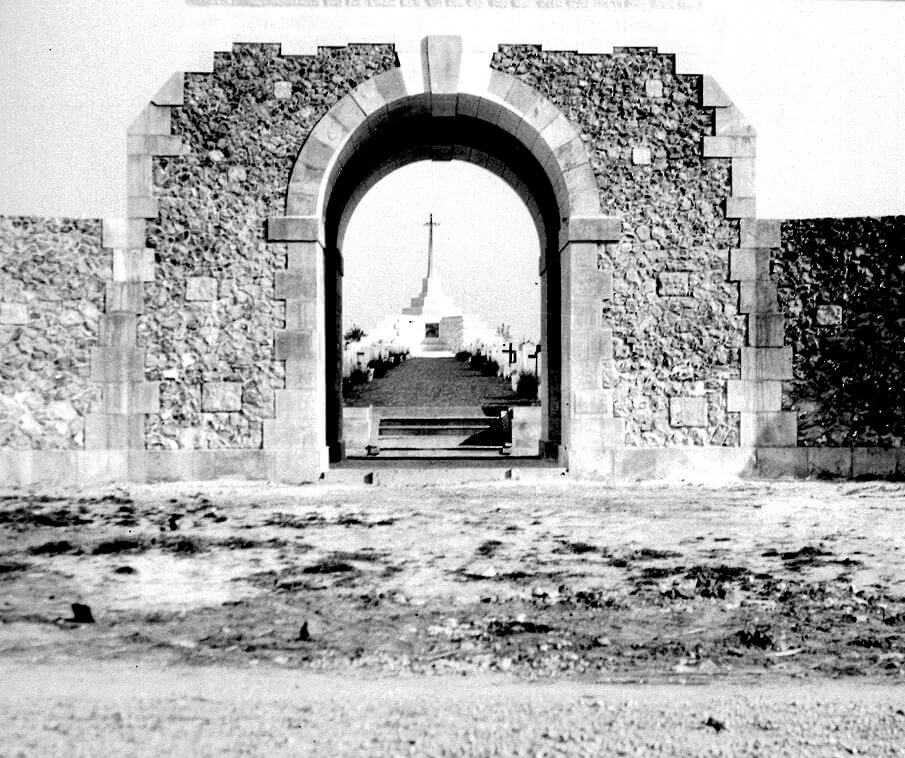 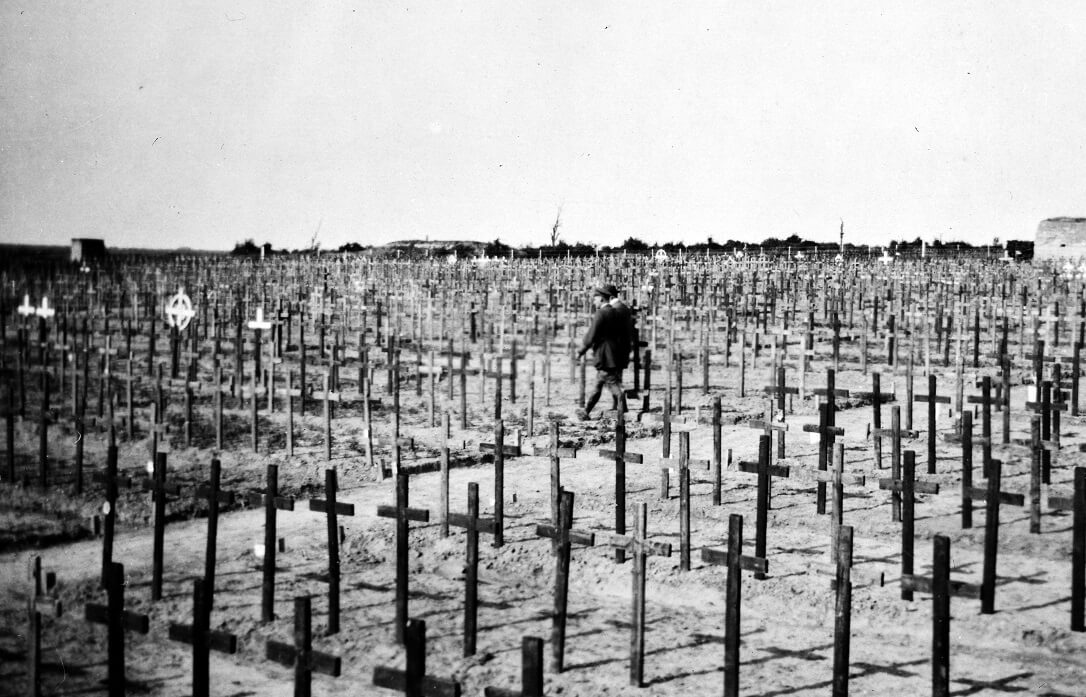 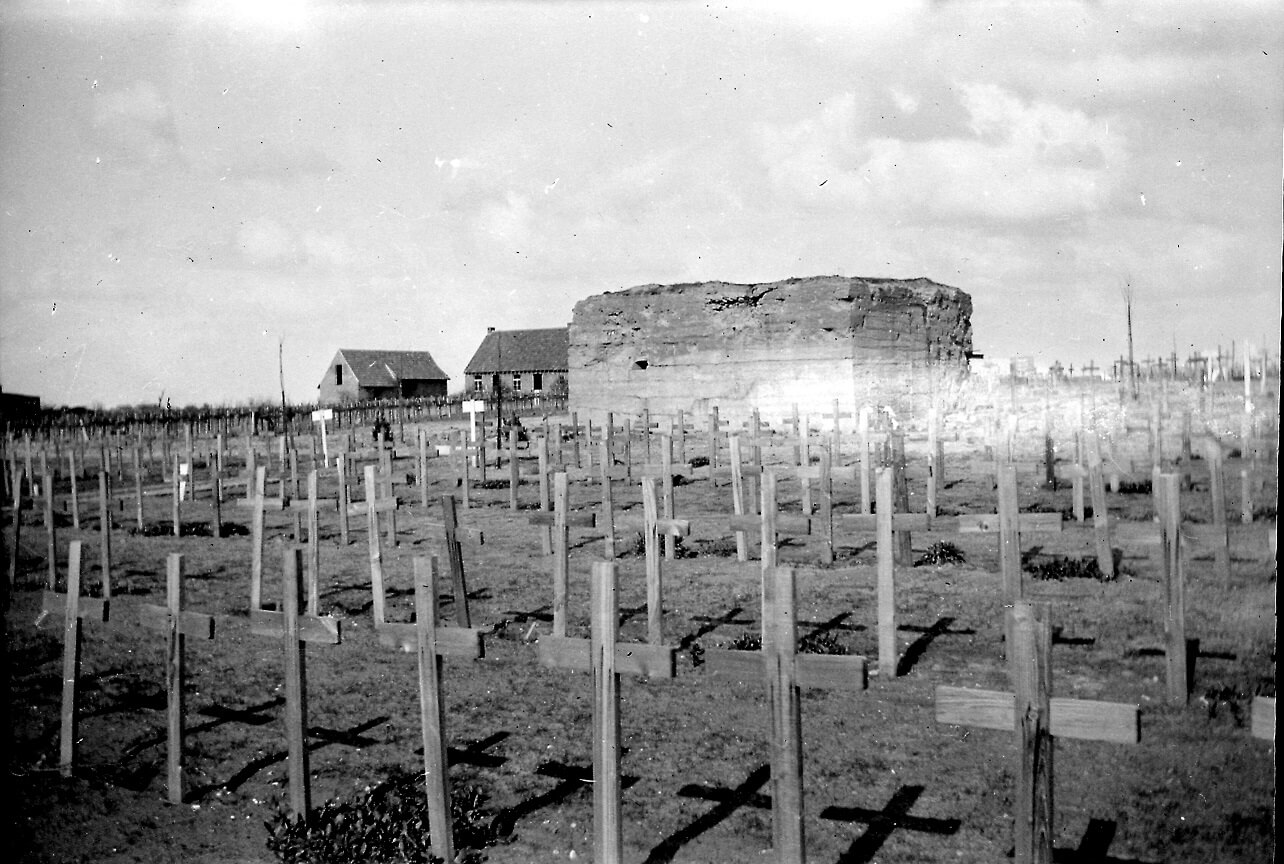 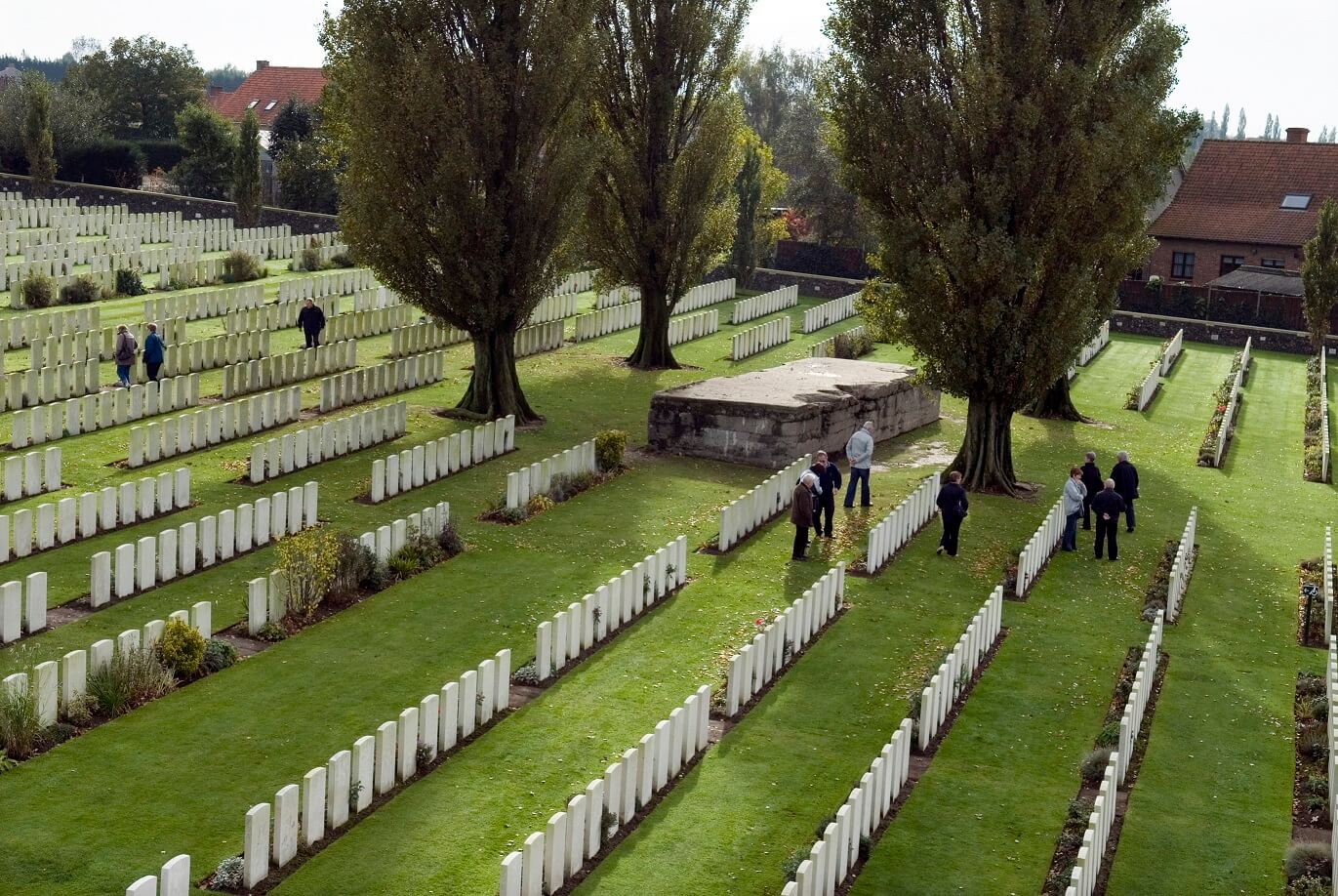 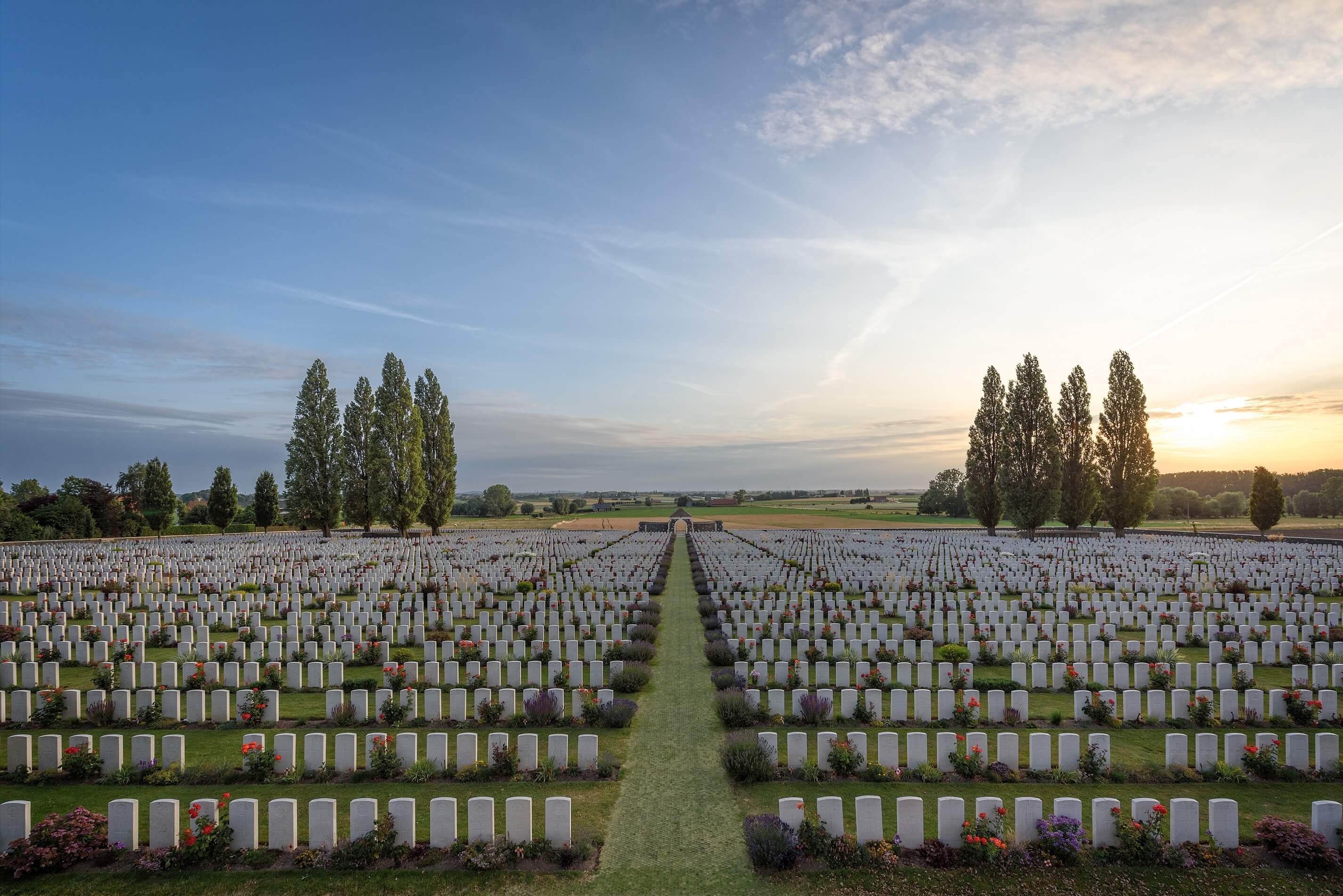 The largest CWGC in Belgium is Tyne Cot Cemetery (11,978 burials). The next largest are Lijssenthoek Military Cemetery (10,786 burials) and Poelcapelle British Cemetery (7,478 burials). 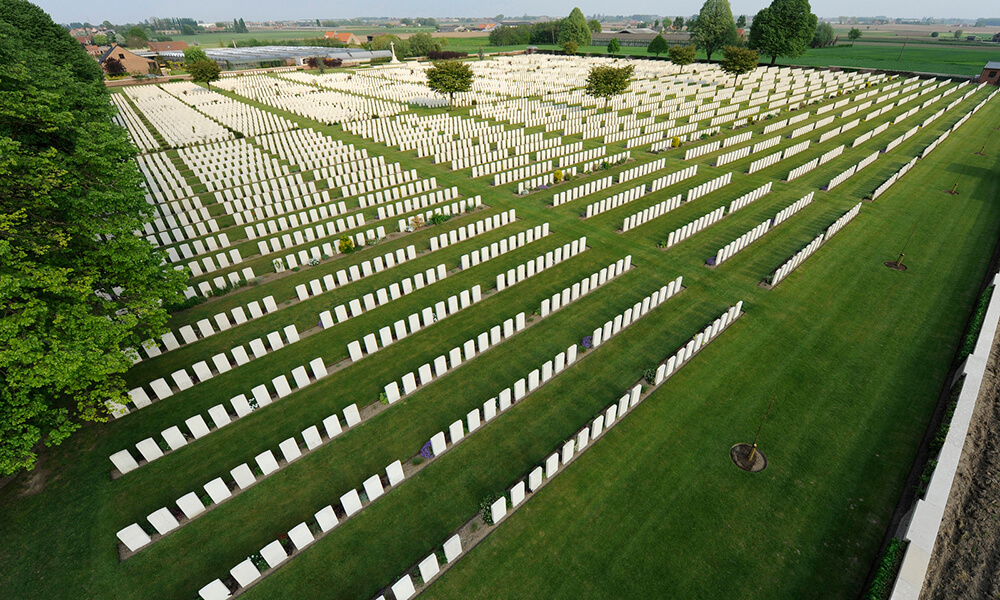 Currently the largest German war cemetery is Rossoschka German Military Cemetery in the Rossoschka Memorial Cemetery in Volograd, however the Sologubovka German War Cemetery, near St. Petersburg, which currently holds more than 56,000 war dead could soon surpass it as burials are brought in from smaller sites in the region. 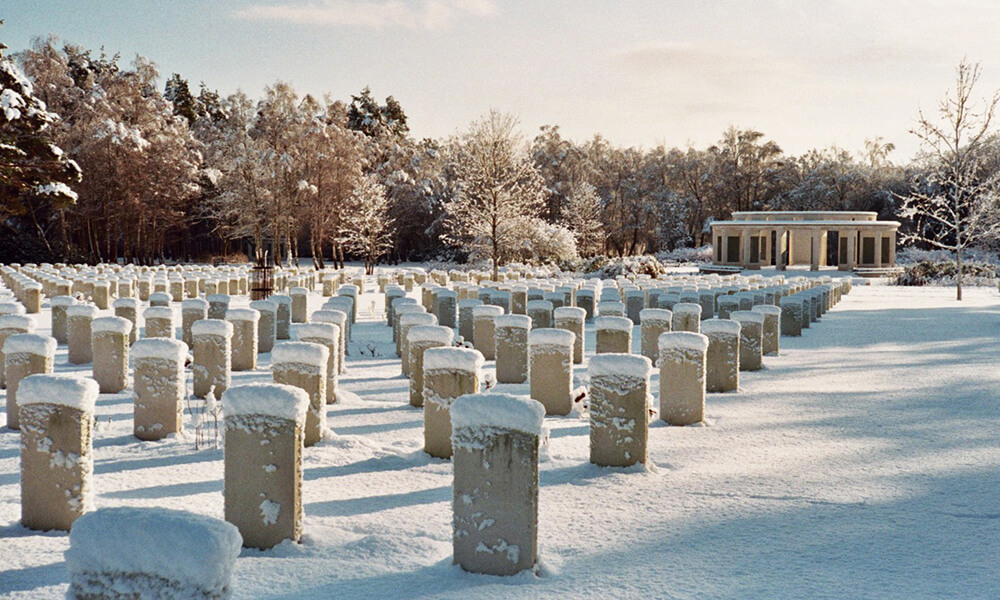 The largest war cemetery in Britain is the Brookwood Military Cemetery in Surrey. There are more than 5000 Commonwealth burials from both world wars in the cemetery, as well as burials from other nations, including France, Italy and Czechoslovakia. There are also two memorials to the missing at Brookwood, one for each of the world wars.

What is the largest military cemetery in the world?

Want to learn more? Discover some of the best war cemetery tours in our guide.

What is the largest COMMONWEALTH war cemetery in the world?

Tyne Cot is the largest Commonwealth war cemetery in the world in terms of burials which is maintained by the CWGC. There are now 11,961 Commonwealth servicemen who fought on the Western Front commemorated in Tyne Cot Cemetery.

What Happened at Tyne Cot during World War 1?

Tyne Cot Cemetery is located in an area called the Ypres Salient, where British and Commonwealth, French, Belgian and German forces fought continuously throughout World War 1 (1914-1918). Both sides launched huge attacks here and hundreds of thousands of soldiers were killed.

In 1917, British forces launched a massive attack in the Ypres Salient. The Third Battle of Ypres, often known today as the Battle of Passchendaele, raged from July to November 1917, and forces from the UK, Australia, Canada, New Zealand and South Africa fought to push the Germans off the low ridges that dominated the area.

The Germans had built strong defences, digging miles of trenches, constructing hundreds of concrete blockhouses or bunkers and installing thick belts of barbed wire. Casualties on both sides were very high, but the Germans were slowly pushed back. 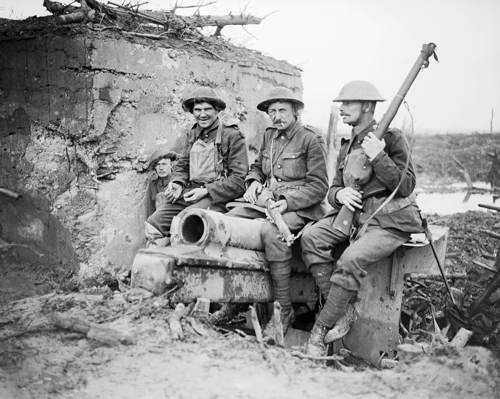 Men of the 4th Coldstream Guards perch on wrecked gun by a blockhouse on the outskirts Houlthulst Forest, 9 Oct 1917 © IWM Q 6046

On 4 October 1917, the 3rd Australian Division captured a group of German bunkers on the ridge below the village of Passchendaele. The largest of the bunkers was used as a Regimental Aid Post to provide care to wounded soldiers. Those who succumbed to their wounds were buried outside the entrance to the bunker.

The first burials were made on 9 October 1917, and by the end of the war 340 Commonwealth soldiers and four German soldiers had been buried here. After the war, this small cemetery was selected as the location for what would become the vast Tyne Cot Cemetery. 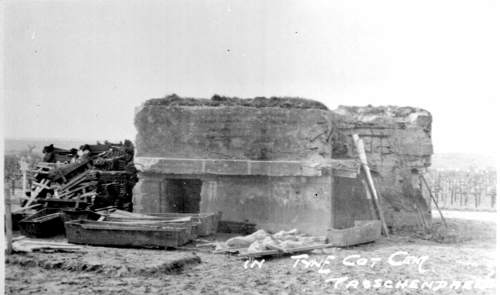 These original graves are distinct from all the others in the cemetery today because of their disordered layout. These men were buried during the battle, when there was no plan or design, and often multiple men were buried together in quickly dug shallow graves or shell holes. In one of the two original plots you will find 27 men buried together in a mass grave, their names inscribed on just seven headstones which are grouped closely together. 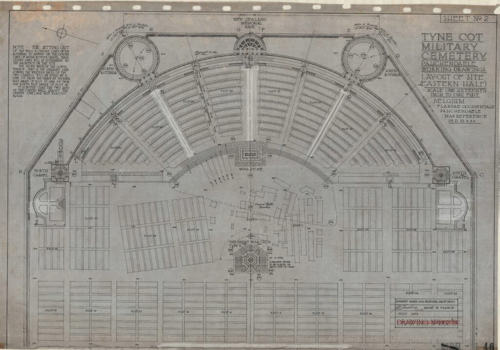 The disordered war-time plot can be seen at the heart of the cemetery, surrounded by ordered rows of post war burials. Tyne Cot Cemetery and Memorial design drawings, 1923 © CWGC

How did Tyne Cot Cemetery become the Largest Commonwealth Cemetery?

After the end of World War 1 in November 1918, teams of soldiers of the Army’s Graves Registration Units (GRU) searched the battlefields for the dead. The area around Tyne Cot was a wasteland of shell holes as far as the eye could see. Almost nothing remained of the nearby village of Zonnebeke, while Passchendaele village had been obliterated entirely. Tens of thousands of soldiers had died in this small corner of the Ypres Salient. 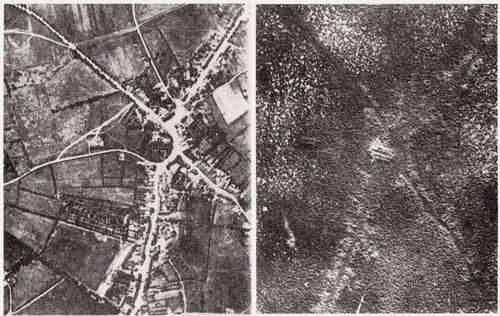 Some of the dead were buried in small makeshift cemeteries, others lay where they had fallen months, if not years before. Some 8,000 GRU personnel scoured the entire Ypres Salient to search for and recover their fallen comrades. The personnel were divided up into labour companies who each had responsibility for a 500m2 area of devastated former battlefield.

This map was made by the GRU units operating in the area around Tyne Cot in 1919. The number in each square denotes the number of remains believed to be buried in that 500m2 area.

When the GRU teams found a body, they would carefully examine the remains to see if they could identify an individual. Details like their rank and regiment could sometimes be gained from a uniform, but often an identification was impossible after the body had laid in the earth for a long time.

It was hard and distressing work, but most of the cemeteries you can visit today exist because of the perseverance of the GRU teams who worked tirelessly for many years after the war to recover and lay the war dead to rest. 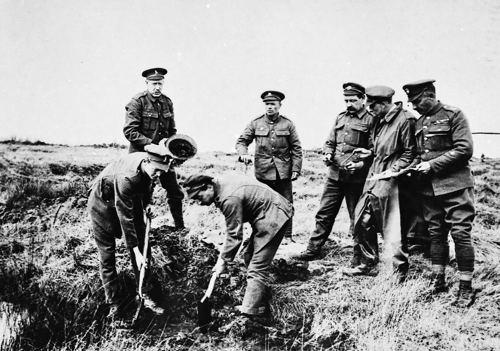 The scale and ferocity of the fighting in the area immediately around where Tyne Cot Cemetery now stands meant that when the GRU teams searched the area, many thousands of bodies were found. Tyne Cot’s central location near where the fighting had been heaviest made it an ideal site for a large cemetery to be created, as bodies only needed to be transported a short distance for burial. 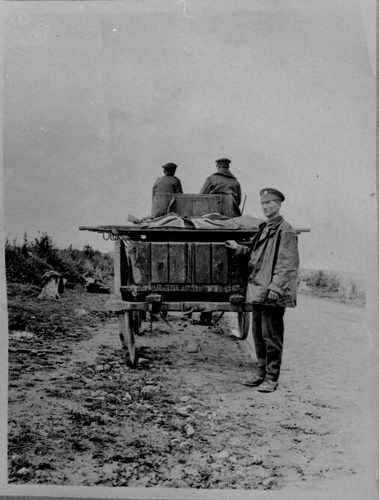 Remains covered with a Union Flag are brought for burial at a cemetery in Belgium, c. 1920. The Goodland Collection © CWGC

When was Tyne Cot Cemetery built? 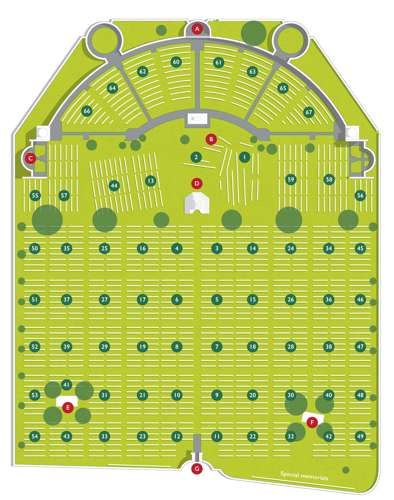 Bodies wrapped in canvas sheet were brought on horse-drawn trucks to the cemetery. They were placed in long trench graves and what details about an individual had been found were stamped on aluminium strips which were attached to rough wooden crosses above each grave. By the end of 1921, 11,871 men had been buried at Tyne Cot. Over the following decades, 97 more burials were made here, making Tyne Cot the largest CWGC cemetery anywhere in the world.

Tyne Cot Cemetery c.1920. Wooden crosses mark the graves, and the central bunker can be clearly seen at the heart of the cemetery.

The work of the Imperial (Commonwealth) War Graves Commission

Founded in 1917, the Commission had no responsibility for the recovery of remains or the vast majority of the war cemeteries in France and Belgium until 1921, when the Army officially stopped the search for the dead. A Commission drawing office in St Omer, France, provided many of the design layouts for the new plots and cemeteries that were being created. Over the next 17 years Commission architects worked to design and build the cemeteries and memorials you see today.

At Tyne Cot, the layout plan for the burial ground was made in 1919 by John Truelove, who served in France with the London Regiment until he was wounded in action in 1915. After the Commission took over responsibility for Tyne Cot in 1921, plans for the transformation of the cemetery were begun by Truelove and Sir Herbert Baker, one of the Commissions principal architects.

Baker and Truelove mixed classical design with touches of old English country churches, gardens and houses to create a simple, yet sentimental and stunning place of remembrance. 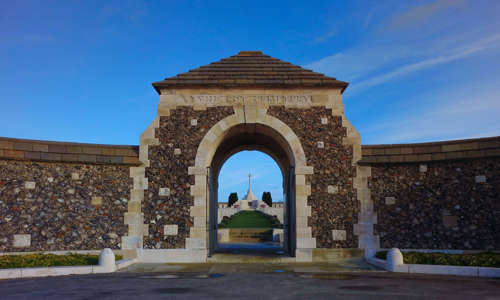 The entrance feature of Portland stone and napped flint is modelled on the entrance gate of Winchester College, and it frames the Cross of Sacrifice that dominates the entire cemetery.

In May 1921, King George V visited Tyne Cot and was shown the plans to incorporate into the design the German bunkers that had been captured by the Australians during the Third Battle of Ypres. The King approved, and today two of the bunkers are still visible, and the Cross of Sacrifice stands on the top of the large central bunker that had been the Regimental Aid Post during the war. 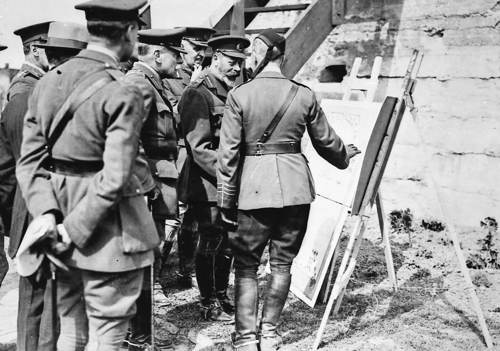 Construction of the Cross of Sacrifice was completed in 1924, and over the next three years, the rough wooden crosses were steadily replaced with Portland stone headstones. In 1927, two stone sculptures of kneeling angels laying wreaths were completed on the top of the pavilions of the Tyne Cot Memorial. These were created by Ferdinand Blundstone and Joseph Armitage. They are the only angels in the CWGC estate. 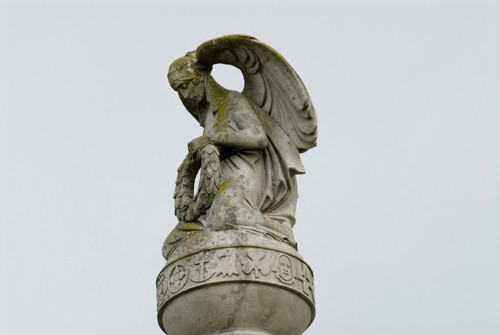 What is the Tyne Cot Memorial to the Missing?

The Tyne Cot Memorial was built after it was discovered that the enormous Ypres (Menin Gate) Memorial was not big enough to fit the names of all the Commonwealth servicemen who had died in the Ypres Salient during the War and had no known grave.

The Tyne Cot Memorial commemorates 35,000 missing servicemen of United Kingdom and New Zealand forces, many of whom died on the battlefields around Tyne Cot during the Third Battle of Ypres. It runs for 230 metres along the entire length of the rear of the cemetery. 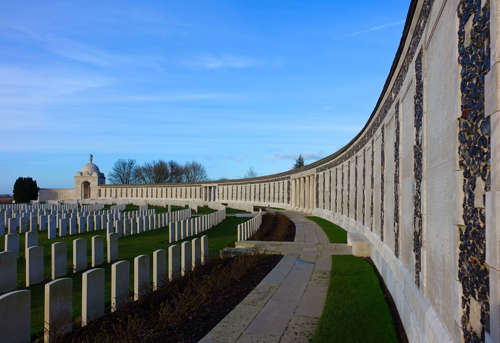 Tyne Cot Cemetery and Memorial were officially dedicated on 19 June 1927. There was no great ceremony, but a small crowd gathered for a short service led by Reverend F. Molyneux, the former chaplain of the New Zealand Division. Several speeches were made, wreaths were laid, and the hymn ‘O God, Our Help in Ages Past’ was sung. 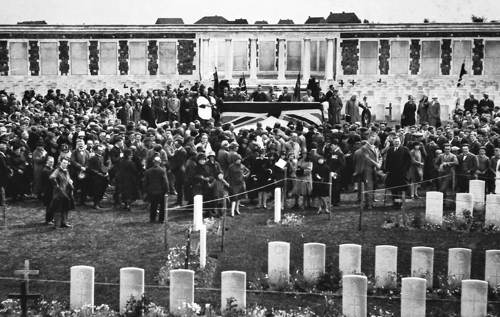 Since 1927, Tyne Cot has been a place of pilgrimage. Today, it is one of the most visited World War 1 cemeteries in the world.  It remains one of the starkest reminders of the human cost of war.

CWGC looks after over 23,000 memorial sites around the world. Visit more war cemeteries and memorials by using our search tool.