What’s the biggest war memorial in the UK?

Get to know our biggest war memorials in the UK with this handy guide.

How many war memorials are there in the UK? 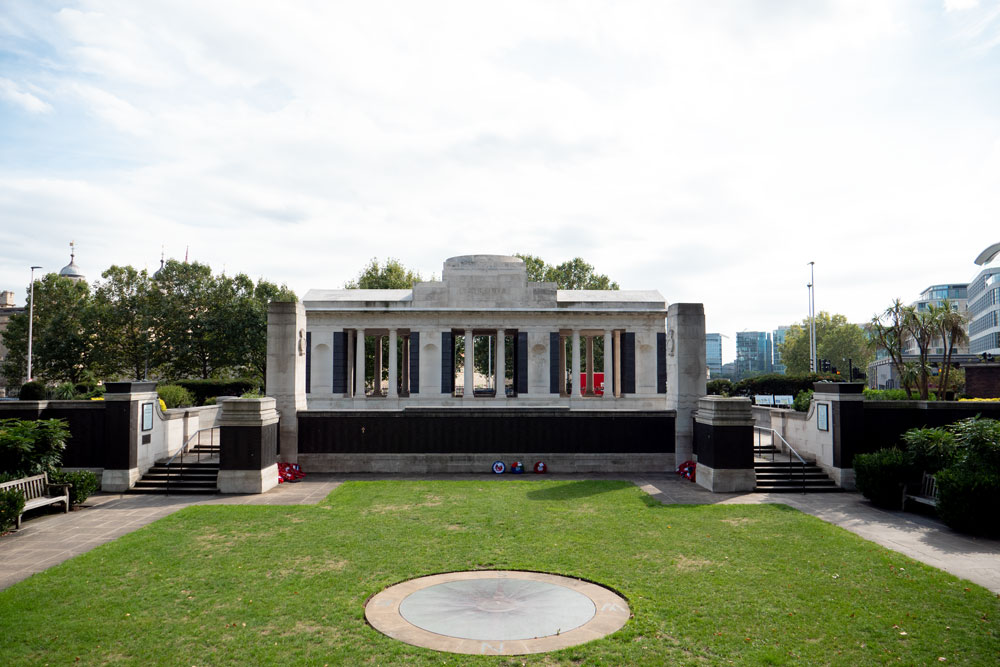 The Commission looks after around 13,000 sites across the UK. Not all of these are war memorials. Our locations range from single burials in churchyards to major cemeteries to the memorials we’ll be talking about here.

Burials are much more common in terms of numbers. That’s because we had more individual burials scattered around churchyards and cemeteries.

Memorials are a different prospect. They contain hundreds, sometimes thousands, of names. Commonwealth War Graves memorials are monuments to the missing. That means they commemorate casualties who lost their lives in the world wars but have no known grave.

Because they have no known grave, they have no burial plot. These casualty’s names are inscribed on the walls of our many world war memorials.

The importance of war memorials is that they offer a place of commemoration and remembrance for the lost and the missing. As touched on above, not all the Commonwealth’s war dead were found or could be buried appropriately. Memorials gave their loved ones a focal point for their grief and a physical reminder of the serviceperson’s memory.

There are many different types of war memorials. Some are colossal structures that act as landmarks and cultural touchstones. Others are much smaller and personal. There was no set pattern when architects like Sir Edwin Lutyens were designing them in the early 20th century. The variety in size and scale of these commemorative locations builds on their appeal.

Fairly often, a cemetery and a memorial will be linked. For example, Brookwood Military Cemetery contains the Brookwood 1914-1918 and Brookwood 1939-1945 memorials within its grounds.

Join us for a journey around the UK as we have a look at the history of our war memorials, why they’re here, and who they commemorate.

Largest war memorials in the UK 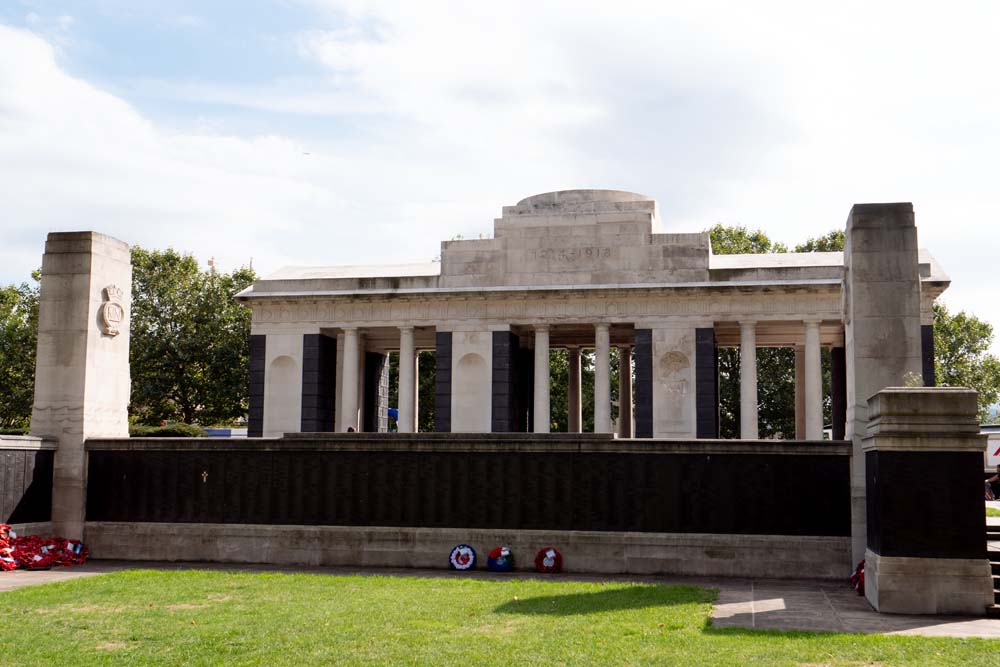 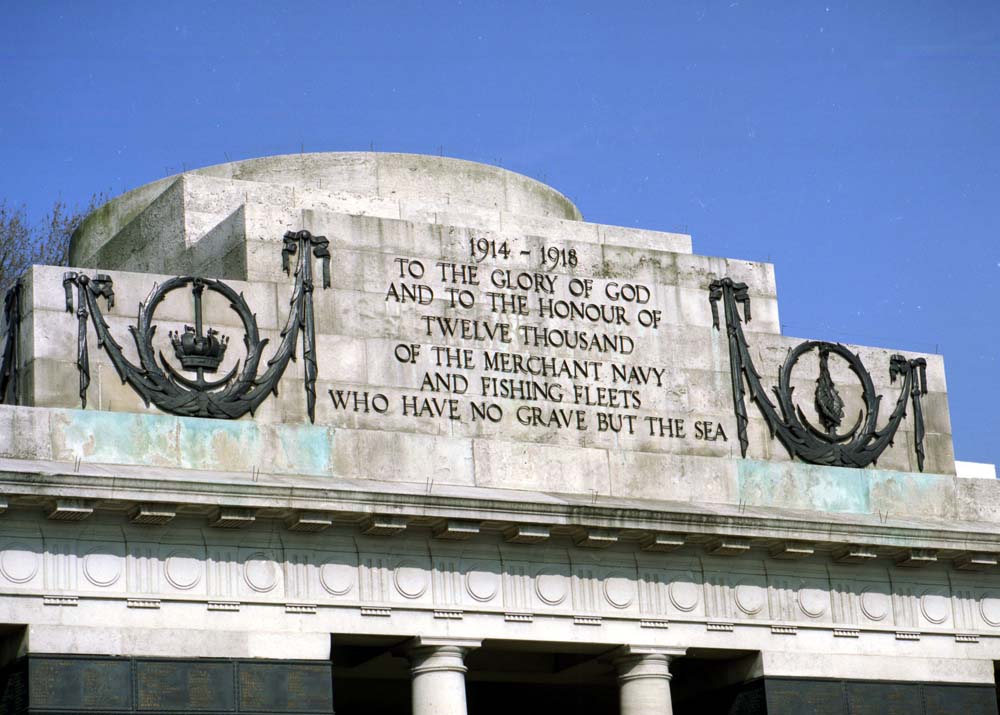 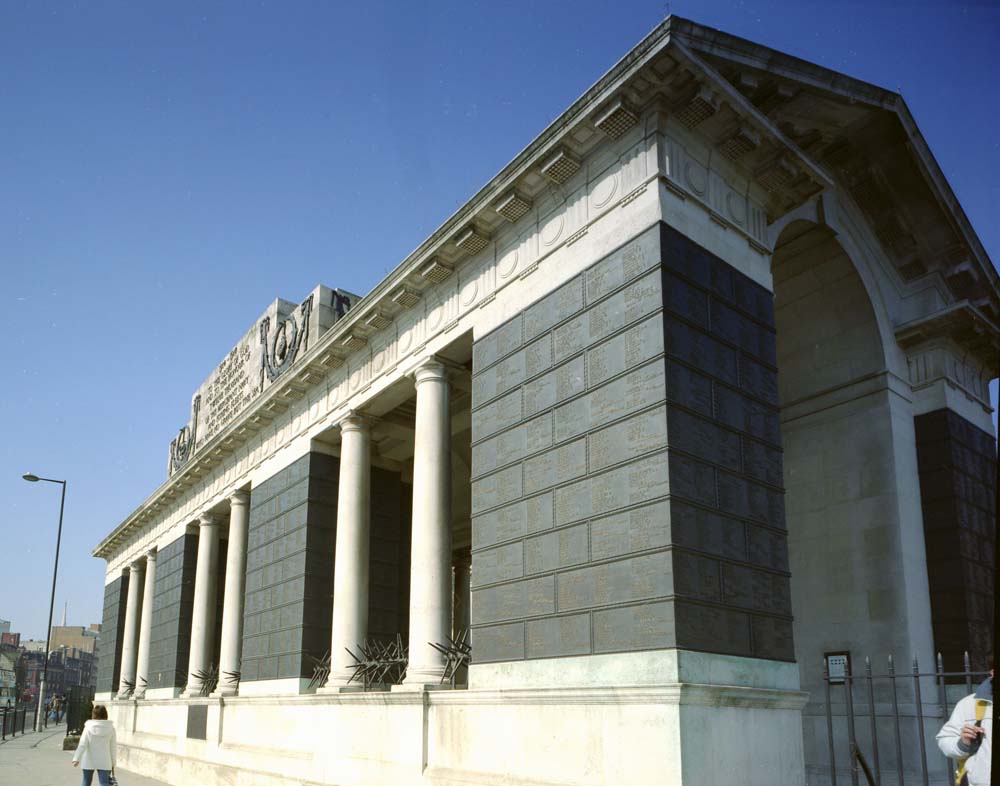 It recognises that the World Wars weren’t won by the armed forces alone.

Commemorated on its panels are the names of 36,000 merchant seamen and fisheries personnel who lost their lives in these conflicts. Because they were serving at sea, locating their graves was essentially impossible.

Their sacrifice and tireless wartime efforts greatly contributed to victory in both world wars. Without a constant stream of shipborne food and supplies, each conflict’s outcome could have been very different.

You’ll notice that four of the top five memorials are dedicated to naval personnel. Again, this is because marking the site where they fell and retrieving their bodies is hugely impractical and unfortunately not possible.

The British Empire drew on its navy for its ability to project power around the world. It was the largest cog in the imperial military and mercantile machine.

Our naval memorials represent casualties sustained on oceans and seas across the globe.

They were first introduced after World War One. The Admiralty decided the best way to commemorate casualties lost at sea would be to erect memorials to the missing. They would stand in the UK’s three chief manning ports:

Each was designed to give a uniform feel, featuring a central obelisk, and sit close to the shoreline. The goal was to turn each memorial into an easily identifiable landmark for shipping to notice.

All the main naval memorials were designed by architect Sir Robert Lorimer. Lorimer had already undertaken many memorial design projects for the Commission. Additional sculpture was provided by Henry Poole. 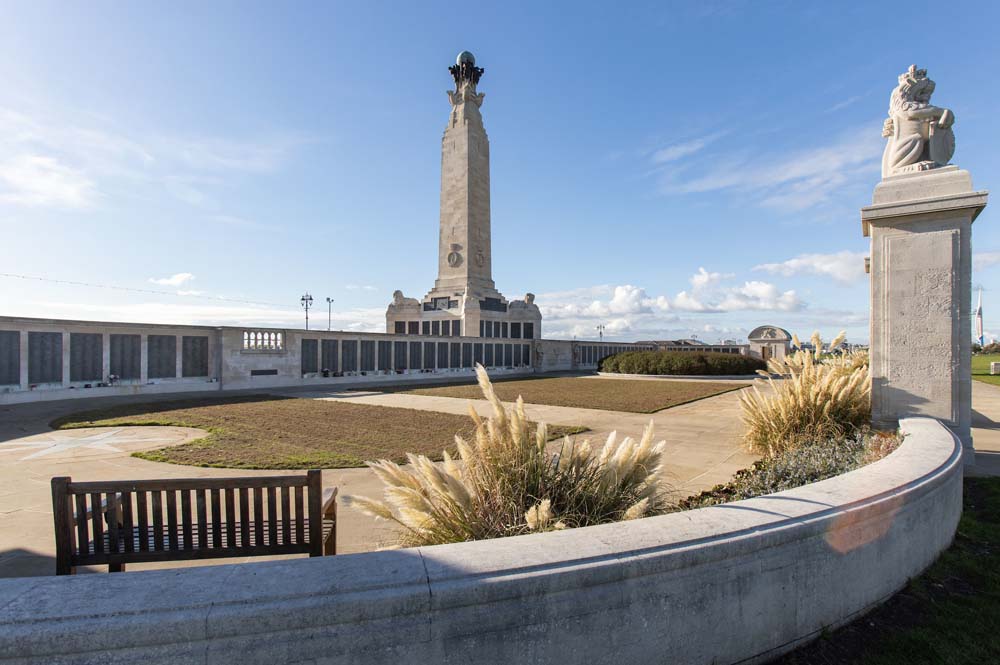 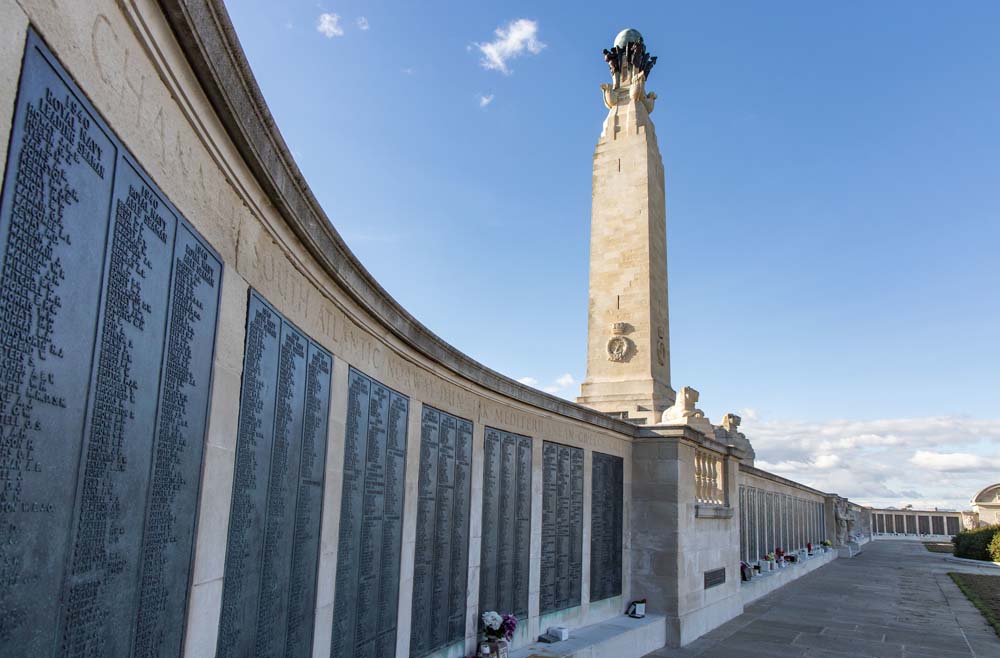 Of the three main naval memorials, Portsmouth Naval Memorial is the largest. It commemorates roughly 10,000 Great War casualties and a further 15,000 from World War Two. It was unveiled by King George V on 15 October 1924.

After World War Two, it was decided these memorials would all be extended to incorporate maritime casualties sustained during the war.

Sir Edward Maufe was drafted in to design these extensions. Several artists were commissioned to create the extensions’ sculpture, including Charles Wheeler, William McMillan, and Esmond Burton.

The British Navy was a powerful force but was supplemented by fleets and armadas from across the Empire. On our memorials, you will find commemorated Indian, Canadian, and Australian casualties, as well as those of other nationalities who served in these navies.

Some of the problems in identifying naval casualties can be applied to those in the air force.

Flying sorties over land and sea, the men and women of the RAF and other Commonwealth air forces could be shot down or crash in remote locations. Sometimes pilots would be spotted darting through the skies one minute, then would disappear out of sight the next, never to be seen again.

Air force memorials are there to remember and commemorate these airborne casualties. 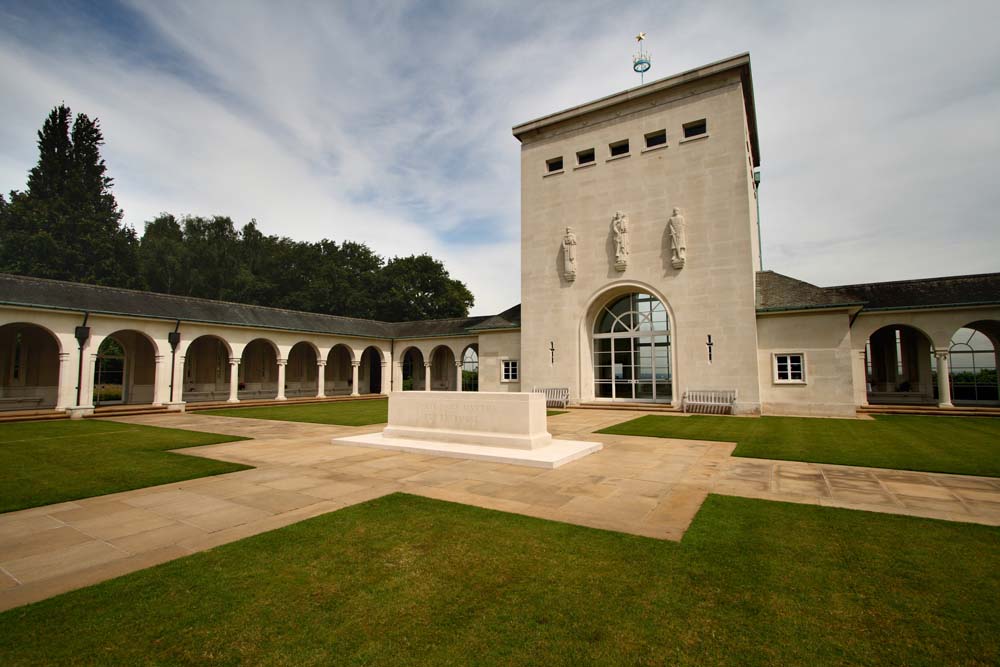 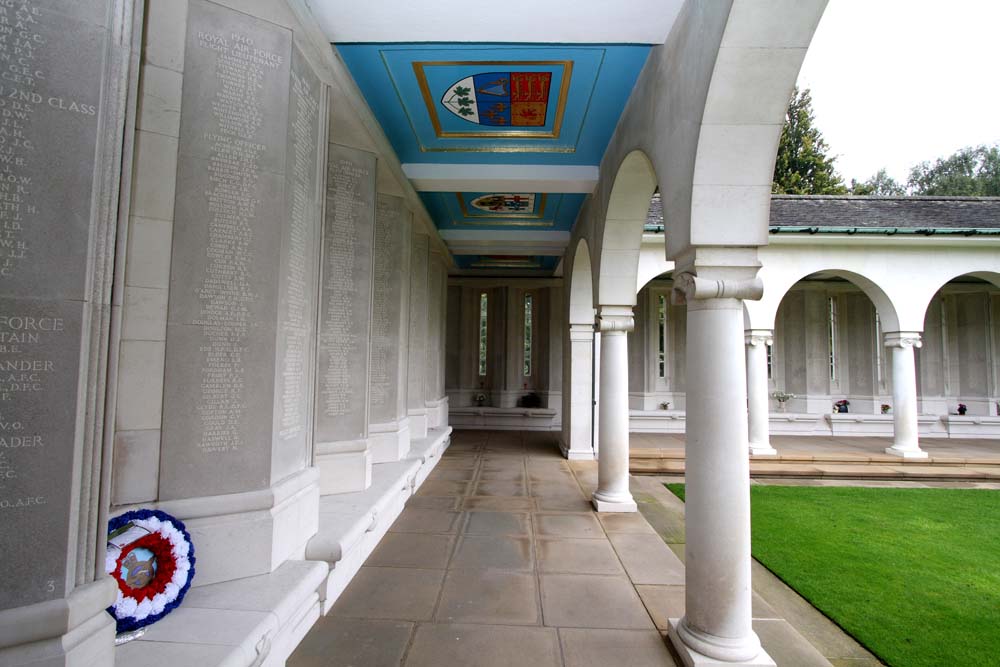 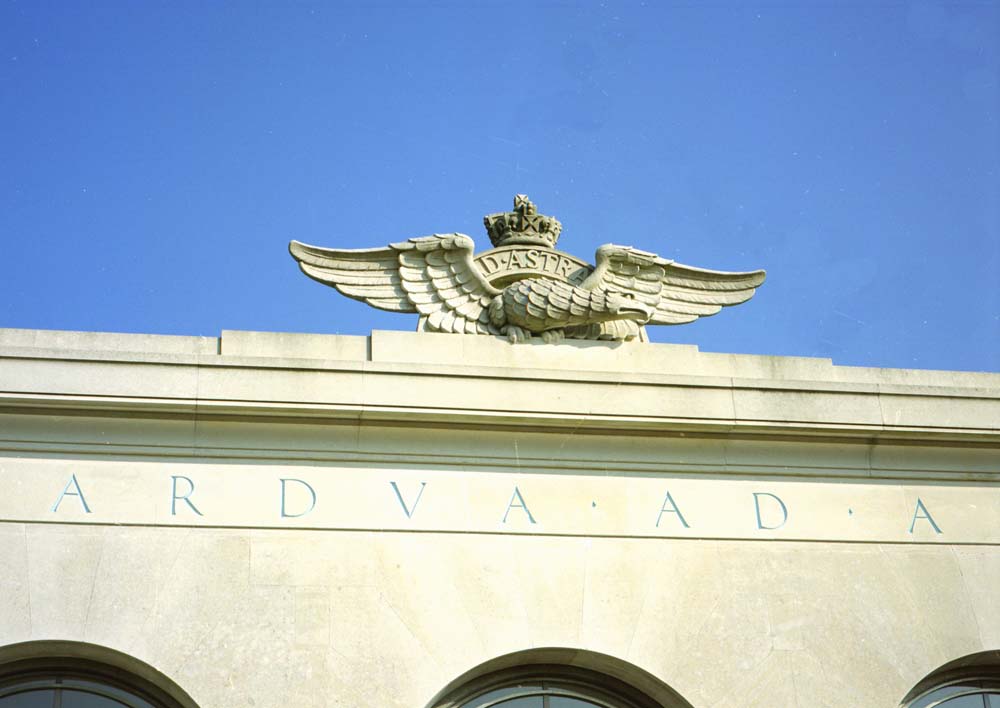 Inscribed on its panels are the names of over 20,000 air force casualties who have no known grave. This represents a multicultural force, with casualties commemorated from the RAF, Royal Australian, Royal Canadian, Royal Indian, Royal South African and Royal New Zealand Air forces.

Some casualties were from nations that were either neutral at the start of the war but still wanted to serve, such as US airmen serving with the Royal Canadian Air Force, or from those whose homelands had been overrun by Nazi Germany and wanted to fight.

Sir Edward Maufe designed the Runnymede Memorial. His design gave the site a sense of quiet serenity, featuring a grass-covered central courtyard. The memorial’s viewing tower resembles those set up at airfields and command centres across the UK during wartime.

It’s fitting that the Runnymede Air Forces Memorial oversees London Heathrow, one of the busiest airports in the world. Planes pass by every day. The names commemorated on the memorial may not have known it, but they were aviation pioneers at the forefront of an exciting aerial revolution.

Runnymede itself is steeped in history. It was here in 1215 that the Barons and King John signed Magna Carta. The great charter is entwined with the sense of British liberty those commemorated on the panels of the Air Forces memorial gave their lives to uphold.

Biggest WW1 memorials in the UK

The largest World War One memorial the Commission looks after in the world is the Sir Edwin Lutyens-designed Thiepval Memorial to the Missing of the Somme.

Over 70,000 missing soldiers from the battles in and around the Somme region are commemorated there. Our largest Commonwealth war cemetery sits on the continent too.

The memorials we look after in the UK commemorating Great War casualties are much smaller. 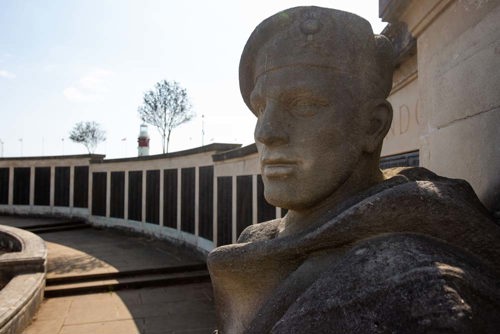 Look familiar? The biggest World War One memorials in the UK are once again the naval memorials at Portsmouth, Plymouth, and Chatham.

They collectively commemorate around 25,000 men and women lost at sea during World War One. This includes naval personnel, fishermen and trawlermen, and those in the merchant navy.

Our other memorials to the missing of the Great War include Southampton’s Hollybrook Memorial. Nearly 2,000 names are commemorated on its panels.

One of Hollybrook’s most notable names is Field Marshall Lord Kitchener, he of iconic “Your Country Needs You” poster fame and Secretary of State for War.

Kitchener died alongside more of his men, including Indian Army forces, when their ship HMS Hampshire was sunk after striking a mine off Scapa Flow in June 1916.

Survivors say Kitchener met his end with trademark stoicism, calmly waiting in the waters before succumbing to the cold and sinking without a trace.

Approximately 45,000 souls were lost at sea during World War One.

Not all our World War One memorials are naval-based, of course.

Brookwood 1914-1918 Memorial, for example, commemorates casualties who died in the UK and Ireland during World War One with no known resting place. They could have died on patrol, of disease, or in training accidents, on land, in the air, or at sea.

Biggest WW2 memorials in the UK

The aforementioned naval memorials (Portsmouth, Plymouth, and Chatham) are amongst the CWGC’s largest UK World War Two memorials too. Together, they commemorate over 40,000 men and women lost at sea during this conflict. 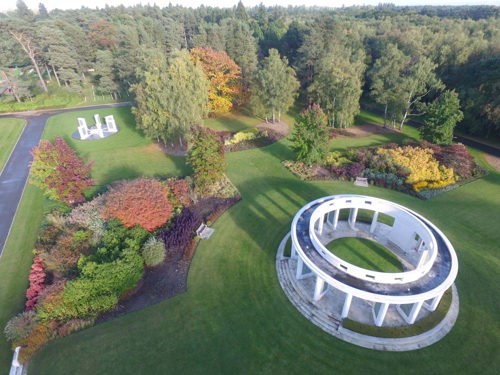 The Brookwood 1939-1945 Memorial is the fifth largest memorial to the missing of World War Two in the UK.

Like its Great War counterpart, the Brookwood 1939-1945 Memorial lies within the grounds of Brookwood Military Cemetery.

It commemorates nearly 3,500 men and women of the land forces of the Commonwealth who died during the Second World War and have no known grave. The circumstances of the war dead commemorated here were such that they could not be appropriately commemorated on any of the campaign memorials in the various theatres of war.

They may have died campaign in Norway early in the war. They could have fallen in various raids over occupied territory in Europe. Others may have been working in espionage or spying capacities. Some may have died at sea when aboard transports of sunken medical ships.

We commemorate as many as we can at Brookwood 1939-45 Memorial.

Again, our largest war memorial in London is Tower Hill.

We may not see it now, with the capital’s shift toward finance and services as the focus of its economic activities, but London was once one of the British Empire’s busiest ports.

Goods and materials used to flow through London from all corners of the globe. Its maritime trade heritage can often be forgotten.

The Tower Hill Memorial, sitting in the grounds of seafarer’s charity HQ Trinity House, plays on that heritage. It’s an important part of remembering historic England, in the context of its central London location.

Of course, merchant seamen and fisheries personnel came from every corner of the UK and Empire. This is reflected in the names commemorated on the Tower Hill Memorial.

To learn more about our cemeteries and largest UK memorials, head over to our Visit Us page.

Here you'll be able to search for your closest nearby memorial, see our upcoming events and open days, and get a feel for our sites across the country.

Our latest blogs
Blog
5 stories you might not know from the Battle of Britain
Blog
War memorial art: iconic works responding to the World Wars
Blog
Thiepval at 90: Sustainable solutions for a spectacular restoration
Read more blogs
Share this on
Tags War Memorials UK