The Commonwealth War Graves Commission has more than 12,000 sites spread across Great Britain that anyone can visit. To help you explore these sites, Alex Elia, from the CWGC, has put together a guide to the best war cemetery tours that you can use to discover the history of the two world wars and explore our cemeteries and memorials across the country. 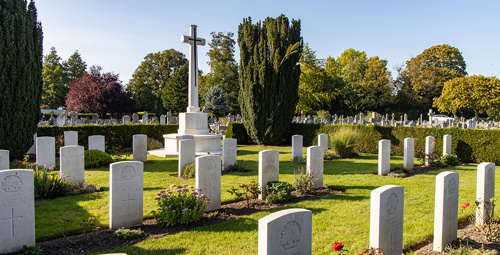 Glasgow was a major hub for Military activity during both World War One and World War Two. Today, there are almost 500 service personnel at rest there.

If you’re thinking of visiting, be sure to download our handy guide which takes you on a self-guided tour of the cemetery, giving you information, some casualties to look out for, as well as a map to help you get around.

Did you know, Glasgow (Western) Necropolis has a screen wall behind the Cross of Sacrifice which bears all the regimental badges of those in Sections P and H of the cemetery. This is very rare in CWGC war cemeteries and is only seen in a very small number of sites worldwide!

Lyness (Royal Naval) Cemetery is on the island of Hoy, part of the Orkney Islands, and has to be accessed by Ferry. Scapa Flow, which is nearby, was a Royal Navy base during both Word Wars. It also made Orkney one of the most important strategic locations to ensure control of the northern entrance to the North Sea.

Sailors began burying their shipmates at Lyness in 1915 and the cemetery remained in use until 1946. If you’d like to visit the 691 casualties commemorated there, you can download our Lyness Cemetery tour for your visit. Be sure to look out for the six private memorials in the cemetery that commemorates the crews of the Royal Navy ships.

Harrogate (Stonefall) Cemetery commemorates over 1,000 service men and women in the War Graves plot in the cemetery. The cemetery began in 1914, however most of the burials here are of Airmen who died during World War Two when Bomber Command Bases were established across Yorkshire.

During World War Two the town became an important administration, training, medical and logistics base. For much of the war 4 and 6 Groups of Bomber Commander were based in Yorkshire and many of the 1,000 servicemen and women buried in Stonefall today served with these formations.

If you’re keen to find out more about those buried here, between sections H and G, you will find CWGC’s shelter building. There is a copy of the cemetery register which has details on each casualty buried there. Don’t forget to sign our visitor book before you go!

During the World War One Cannock Chase was home to bustling military camps, hospitals, training areas and even its own Railway – the ‘Tackeroo Express’. The cemetery commemorates over 370 casualties from both wars, including those who died of the influenza pandemic, known as the ‘Spanish Flu’ which broke out near the end of World War One.

On your visit, look out for the grave of Albert Edward Easter Urell, who you’ll find in plot four. His rank is given as ‘BOY’ being the youngest casualty in this cemetery, aged 16. A short walk from Cannock Chase War Cemetery is Cannock Chase German Military Cemetery, which contains the graves of nearly 5,000 German and Austrian servicemen and civilians of the two World Wars.

To help you explore download our Cannock Chase Cemetery guide before your visit.

Cardiff (Cathays) Cemetery opened in 1859 and contains the highest number of CWGC war graves in Wales. It commemorates nearly 700 casualties of the Commonwealth and allied servicemen and women of the two World Wars.

The majority of Cathay’s World War One burials were members of British units but is also the resting place of six Australians and nine Canadians. Two thirds of the servicemen buried here died during the war, the remainder succumbed to post war injuries, disease or influenza – known as the Spanish Flu, the global pandemic which killed six percent of the world’s population between 1918 and 1920.

During World War Two Cardiff was the biggest coal port in the world and came under a lot of repeated enemy air attacks. Several bombs struck the lower cemetery, destroying hundreds of grave markers. Our civilian Roll of Honour in Westminster Abbey records the names of all the Cardiff Blitz dead, including the Palmers and their eight children.

Download our Cardiff (Cathays) Cemetery guide before you visit, and make sure you look out for the grave of 17-year-old Aircraftwoman 1st Class Barbara Sarah Watkin Williams, Women’s Auxiliary Air Force (section O). She is one of eight service women buried in this cemetery.

Newark-Upon-Trent Cemetery commemorates 530 casualties from both World War One and Two. The cemetery was first built in 1856 as both the final resting place for the dead but also as a park for the local people of the town.

The 49 Service men of World War One are scattered throughout the cemetery. However, when World War Two broke out space was set aside for service burials. Today in that space, you’ll find 80 commonwealth and 400 Polish service men buried there.

As well as a CWGC Cross of Sacrifice, the cemetery also hosts a memorial cross honouring fallen Polish airmen, which was built in 1941 and unveiled by Władysław Raczkiewicz, President of the Polish government-in-exile from 1939-1947, and General Władysław Sikorski, wartime Prime Minister and Commander-in-Chief of Polish Forces. Both men were later buried here. Download our Newark-Upon-Trent Cemetery guide before your visit.

Cambridge City Cemetery has over 1,000 servicemen and women who lost their lives during the two World Wars. It’s also just one of eight sites in the UK with such a large number of war graves.

The World War One burials here number 181, and almost all these casualties died as a result of wounds or illness. During World War Two, General Service and the Air Force plots were established for the burial of casualties from the air force stations set up in the eastern counties during the war. A Stone of Remembrance, which was unveiled in July 1951, stands near the centre of the Air Force plot.

In the cemetery there are four plots to visit: the World War One plot, the Air Force plot, the General Services plot and the Dominion plot.

The World War One plot has a private memorial cross at the centre of it. Look out for two ‘boy’ soldiers buried there, Rifleman H.E. Hammonds and Private Ernest Thorne, both 17 years old.

The Air Force plot is the largest in this cemetery. Look out for Pilot Officer Dick Miller and his crew who are buried together in grave 15755. In our General Service plot, look out for Harry Clack who died while trying to recover a German reconnaissance aircraft, aged 16.

In the Dominion plot look out for Private H.L. Paul who served with the Canadian Infantry but was a volunteer from Springfield, Ohio, USA. Download the Cambridge City Cemetery guide before your visit for more information about these casualties.

Brookwood Military Cemetery commemorates over 5,000 service personnel and is the largest CWGC cemetery in Britain.

It was established as World War One drew to a close and was then extended for the burials of World War Two personnel. Also, at Brookwood Military Cemetery there are two memorials commemorating Commonwealth service personnel who died with no known grave. The Brookwood 1914-1918 Memorial records the names of over 260 who died in the United Kingdom during World War One.

The Brookwood 1939-1945 Memorial commemorates more than 3,400 men and women of Commonwealth land forces who died at sea, in raids on occupied Europe, or while on service outside the main theatres of war. Among those honoured on this memorial are special agents who lost their lives while operating in enemy territory.

This memorial commemorates over 1,400 men of the Merchant Navy who have no grave but the sea. The memorial stands over the Mersey and can be accessed by foot, with ramps for wheelchair access.

The design of the Liverpool Naval Memorial came as the result of an architectural competition, open to all architects who were veterans of H.M. Forces. In total 88 designs were submitted and the design by Messrs Stanley H. Smith and Charles Blythin was awarded first prize.

Tower Hill Memorial lies in the heart of London and bears the names of more than 36,000 men and women of the Merchant Navy who have no grave but the sea.

It is easy to forget that London is a port city connected to the sea by the River Thames and that one hundred years ago the port of London was the centre of global trade and maritime commerce. The Tower Hill Memorial was built to commemorate and recognise the contribution of those thousands of civilians, who though untrained in the arts of war, met the fate of fighting men on the high seas. The World War One memorial was unveiled by Queen Mary on 12 December 1928 and the World War Two extension was unveiled by HRH Queen Elizabeth II on 5 November 1955.

Download the Tower Hill Memorial guided tour ahead of your visit, and remember to look out for Apprentice Donald Owen Clarke (panel 92), who was awarded the George Cross (GC) for his bravery on the tanker, aged 19.

Plymouth Naval Memorial commemorates the missing of the Royal Navy from the Two World Wars. At Plymouth over 23,000 service personnel are named. The World War One panels are around the base of the obelisk.

The World War Two panels are on the lower walls of the memorial. The names are arranged according to year of death, then by service, rank and surname.

There are at least 44 pairs of brothers commemorated on the Plymouth Naval Memorial. A few to look out for are Charles Hender from Torpoint, who’s on Panel 1 of the World War One Memorial. On Panel 3 is his brother William Pascoe Hender.

Also, on Panel 1, you will find Alfred and David Wright from Birkenhead. The brothers aged 17 and 19 died together when HMS Vicknor was sunk in January 1915. From World War Two, you will find Edward and Joseph Wood who died on 9 July 1944 on panel 87.

Download the Plymouth Naval Memorial guide to discover more of the stories from this memorial.

At Chatham Naval Memorial, one of the three naval memorials in Great Britain, has more than 18,500 service personnel commemorated on its panels.

During World War Two hundreds of thousands of men and women joined the Navy. They served in a wide variety of roles and vessels, from converted fishing trawlers to submarines, immense battleships and aircraft carriers, and in shore establishments. Once again, the navy protected vital convoys of food, supplies and Allied troops, and engaged the enemy at sea and submarine attacks claimed many more lives.

Many of the sailors on this memorial were awarded gallantry medals for their brave actions, you can spot these by the letters used after their names, for example, V.C. (Victoria Cross) or D.S.M (Distinguished Service Medal).

On Panel 18, you will find the name of Major Francis J.W. Harvey, who was awarded the VC while serving on HMS Lion at the Battle of Jutland in 1916. Also, on the World War Two panels, you can locate the third VC which was awarded to Captain E.S.F. Fegen (Panel 34, column 1) who commanded HMS Jervis Bay.

Grab a picture on your visit and don’t forget to share them with us on our social media channels!

Ready to start exploring? Find more tours of cemeteries and war graves near you on our website. From walking tours to battlefield tours - find out when tours start and what’s included.