Standing proud over the Mersey, the Liverpool Naval Memorial commemorates over 1,400 men of the Merchant Navy who died serving with the Royal Navy during the Second World War and who have no grave but the sea.

When war came in 1939, it was evident that the Royal Navy would not be able to man all the vessels they required, even with the call-up of the Royal Naval Reserve (RNR) - professional civilian sailors - and Royal Naval Volunteer Reserve (RNVR) - reservists with no formal experience at sea. To deal with the shortfall in manpower, a number of officers and men of the Merchant Navy volunteered to serve with the Royal Navy under the terms of a special agreement, known as a T.124 agreement, which made them subject to Naval discipline while generally retaining their superior Merchant Navy rates of pay and conditions. Officers were offered temporary commissions in the RNR or RNVR while the men served in the Naval Auxiliary Personnel (Merchant Navy). More than 13,000 seamen served under these T.124 arrangements in many types of naval auxiliary vessels, from ocean liners that had become armed merchant cruisers to boarding vessels, cable ships and rescue tugs. Those lost or buried at sea are named on this war memorial.

The Battle of the Atlantic was fought throughout the Second World War and described by Winston Churchill as ‘the only thing that truly frightened me in the war’. Between 1939 and 1945 German submarines sank some 3,000 ships, the majority of these were naval and merchant vessels lost while travelling in convoys across the Atlantic.

Allied convoys were protected by escort ships from the Commonwealth Navies, together with fighters and bombers of RAF Coastal Command. The task of providing escorts seriously tested the Royal Navy’s resources in the early months of the war, and small and elderly ships were pressed into service as armed merchant cruisers before the introduction of purpose-built corvettes in 1940 and frigates from 1942. The United States began to provide convoy escorts from 1942, which increased in number and strength from mid-1943. British command of the battle was exercised from Liverpool, led by the commander-in-chief Western Approaches and his staff based inside and underneath the Exchange buildings behind the Town Hall. 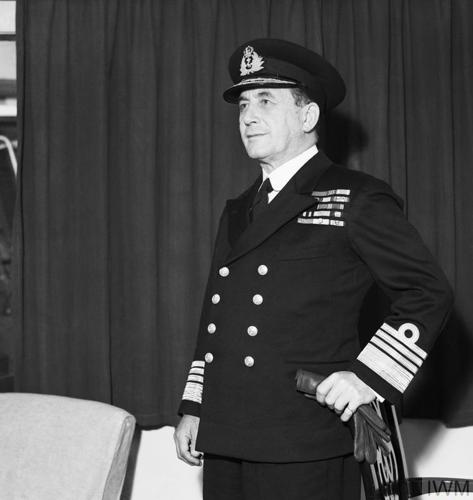 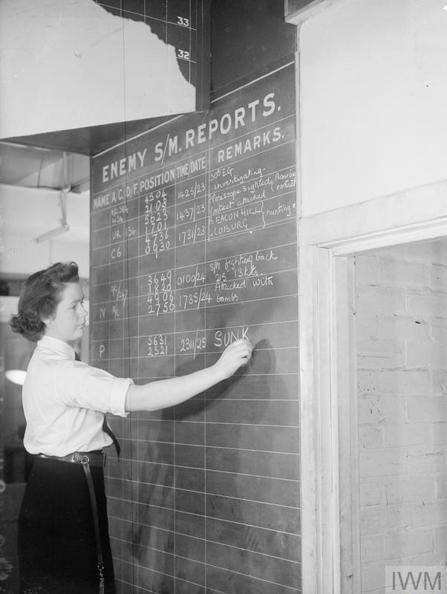 A member of the Woman’s Royal Naval Service at work on the enemy submarine reports board, Atlantic Battle Operations Room, Derby House, Liverpool, January 1945 © IWM A 25740

Liverpool was a key convoy port during the Second World War, with thousands of vessels unloading at the docks, or assembling in the mouth of the Mersey. Many ships, both Merchant and Naval, were built or repaired on Merseyside, and the families of many civilian and naval seamen lived in the area including Trimmer Joseph Quinn, son of Michael and Bridget Quinn and husband of Rose A. who was one of at least six other Liverpudlians amongst the crewmen of HMS Laurentic, a former luxury linear which had been transformed into an Armed Merchant Cruiser, torpedoed off Ireland’s northwest coast whilst coming to the rescue of another stricken ship on 3 November 1940. His name, along with his shipmates, is on Panel 6, Column 1 of the memorial.

The former merchant men commemorated on the memorial came from across Britain and the commonwealth as well as beyond. Over 90 individuals named on the memorial had family living in Singapore, while others had connections with China, India and many other parts of the world. Many more have distinct Arabic names, many of these men are believed to have been recruited in Aden and Egypt, showing the diversity of the individuals serving in the Merchant Navy and those who volunteered for service with the Royal Navy. 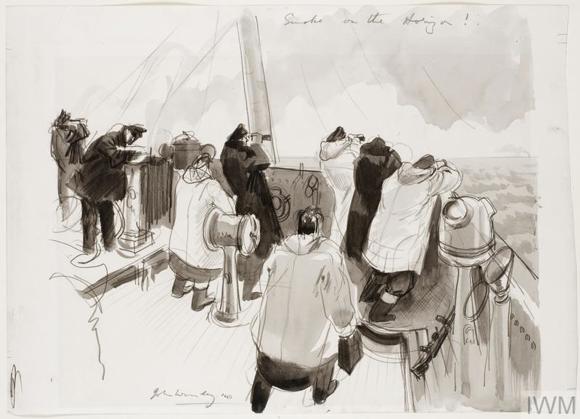 Smoke on the Horizon, 1940. Seven sailors gather with binoculars and telescopes on the deck of the HMS Laurentic. They are looking towards a plume of smoke rising on the horizon. © IWM ART LD 319

Those of the Merchant Navy who died served onboard civilian ships during the war and who have no known grave are commemorated on the CWGC Tower Hill Memorial in London.

The Liverpool Naval Memorial commemorates over 1,400 men of the Merchant Navy who died serving with the Royal Navy during the Second World War, but who have no known grave.

The port of Liverpool was chosen as the site for the memorial as it was here that the scheme, which saw over 13,000 Merchant Navy seamen volunteer to serve with the Royal Navy, was administered.

This handwritten note from the CWGC archive records the first visit by CWGC officials to the proposed site for the memorial on the Mersey waterfront, on 14th-15th October 1946. 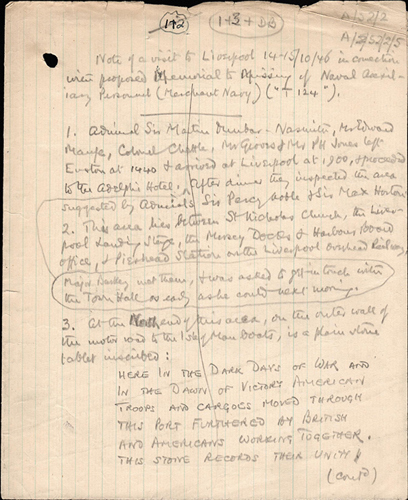 The general area for the memorial had been suggested by Admirals Sir Percy Noble and Sir Max Horton, who had both played significant roles in the successful deployment of the convoy and escort systems during the Battle of the Atlantic.

Amongst the officials who visited the site on this trip was the CWGC’s Principal Architect Sir Edward Maufe, and the Admiralty’s representative on the Commission, Admiral Sir Martin Dunbar-Nasmith, who would later become Fabian Ware’s successor as Vice-Chairman of the Commission.

The visit to Liverpool was the culmination of several days travelling, as the Commission representatives had in the preceding days also paid visits to Lowestoft and Lee-on-Solent, where other naval memorials were planned (and which would indeed be constructed at those sites)

Like the memorials at Lee-on-Solent and Lowestoft, the design of the Liverpool Naval Memorial came as the result of an architectural competition, open to all architects who were veterans of H.M. Forces, with notices being placed in the architectural press.

In total eighty-eight designs were submitted, and following scrutiny and assessment by Edward Maufe, the design by Messrs Stanley H. Smith and Charles Blythin was awarded first prize. 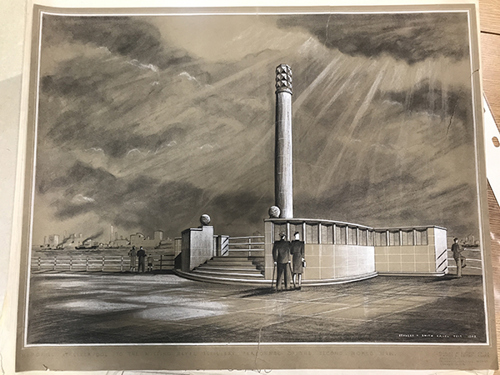 A small exhibition of some of the submitted designs was held at the CWGC’s Head Office at 32 Grosvenor Gardens, London, between 1st – 3rd March 1948, with members of the public invited to view the designs and sign the accompanying visitor book

Smith and Blythin’s design consisted of a 32-foot column of Portland Stone, with a reflecting lantern on top, partly surrounded by a stone wall with bronze panels on which the names of the missing could be recorded.

The architects explained their design choices

“It was considered that the river with its wide open view called for the memorial having a feature that would be in scale with such a position, it was therefore decided…..to use a column of simple design for the main feature of the memorial.

Silvered glass lenses are incorporated in the top of the column, these are not provided with lights but are intended to symbolise a lighthouse, the mariners guide.”

There were however some modifications made to their design, most notably the rejection of a planned surrounding garden which was to be in the shape of an anchor, and the abandonment of a proposed projection from the memorial beyond the harbour wall for fear of causing a hazard to passing ships. 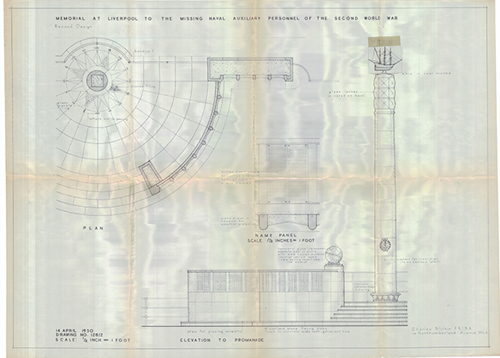 One requested modification didn’t make it through to the final design however. The Admiralty suggested the addition of a cast bronze model boat to sit atop the glass lantern, and Blythin duly provided an amended drawing showing the new feature. In the end though, it was felt the new design did not quite work, and the model ship was never made.

The final designs were approved in April 1950, and tenders placed for its construction. The construction contract was awarded to the William Moss and Sons Ltd, of Roscoe Street, Liverpool, and the memorial was completed in 1951. However, owing to a bronze shortage, there was a delay in the production of the name panels, which meant that the memorial wasn’t unveiled until the following year. 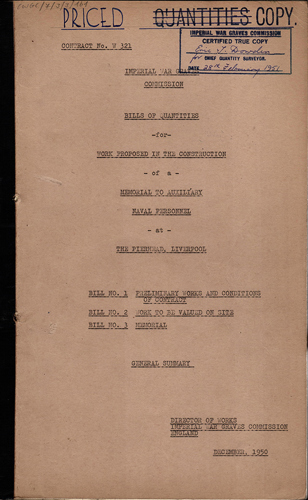 The memorial was unveiled by Admiral of the Fleet The Viscount Cunningham of Hyndhope on Wednesday 12th November 1952, with space reserved at the ceremony for relatives of those who were commemorated on the memorial.

In his unveiling speech, Viscount Cunningham paid tribute to the dead, saying

“Inevitably our feelings must be those of sorrow; sorrow for the sacrifice of so many lives, mainly young lives, full of promise. But to those natural feelings surely must be added those of pride; pride that when the fortunes of humanity were in issue they staked everything either in achievement or ambition, which they had or hoped for, and gave to a righteous cause, gave without doubt, gave without stint, all they had to give”.

The location of the memorial on the Liverpool waterfront was in harmony with its purpose, being clearly visible to passing ships travelling to and from the Port of Liverpool.

It’s location also meant that it was easily accessible to people, but this could have both positive and negative consequences. 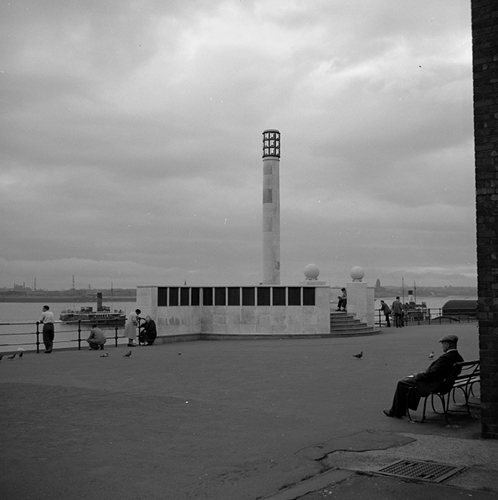 On the one hand, the memorial could become an integral part of people’s lives, as this letter concerning a young bride to be seeking permission to place her marriage bouquet on the memorial shows (the Commission raised no objection to the request) 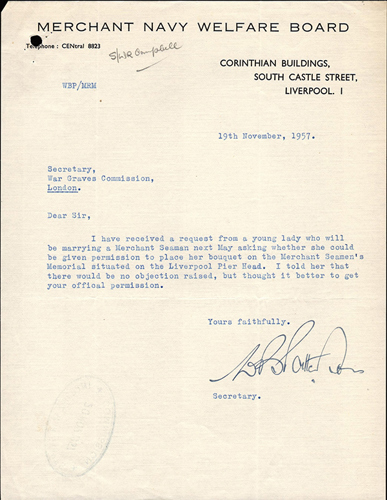 On the other hand, easy access to the memorial could have an adverse effect. Less than two years after its unveiling, it was noted that the paving and steps of the memorial were discoloured, and the stone seat surround was covered in boot marks. This wear and tear was attributed to the numerous visitors who were coming to the memorial to use it as a vantage point to watch the river traffic, and also to the activities of children who were climbing all over the stonework. 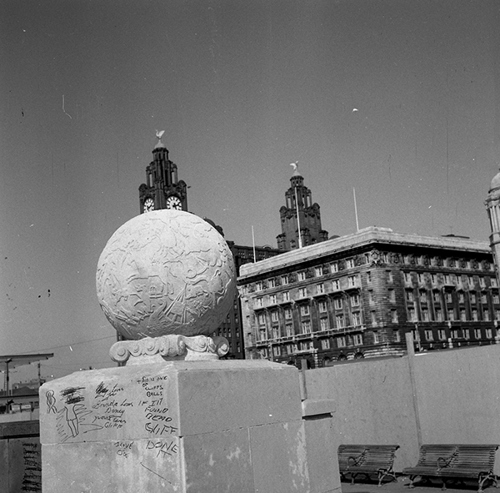 Over the years, incidents of anti-social behaviour at the memorial increased, and it became a regular target for vandalism. The issue become so bad that the CWGC seriously considered dismantling the memorial and erecting one of a different design at an alternative location in the city where they believed it would be more secure, even going so far as approving a new design in 1976. In the end though, after all factors were considered and following strong local objection to the proposal, it was decided to completely renovate the existing memorial instead. 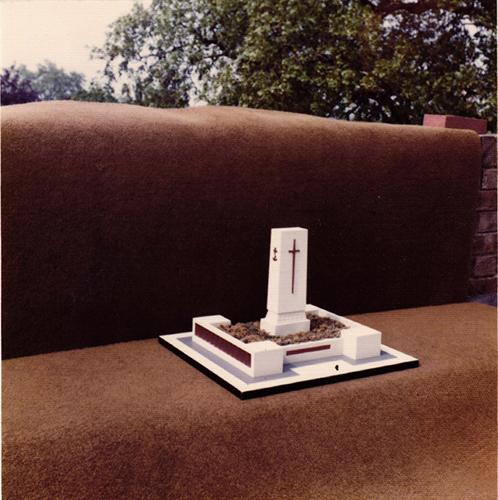 While sporadic acts of vandalism did not completely disappear, the situation gradually improved, and in 2010 the memorial was given Grade II listed status.

In recent years the CWGC has carried out additional maintenance work on the memorial, including in 2019 the installation of two new Portland stone globes (depicting the terrestrial and celestial spheres) which surmount the entrance posts. These were carved and engraved by CWGC stonemasons at Brookwood, and replaced two worn globes which had themselves replaced the original globes in the 1979. 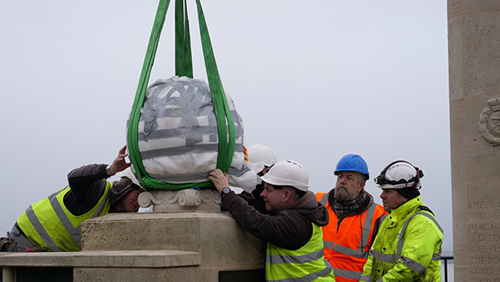 The Memorial is situated on the Mersey River Front at the Pier Head, Liverpool, close to and behind the Liver Buildings and the end of James Street, right by the Museum of Liverpool. Access is by foot, with ramps for wheelchair access to the memorial’s surrounds.