Located near the western tip of the Furness peninsula on the Irish Sea, Barrow-in-Furness (Thorncliffe) Cemetery was opened in 1873 and covers 66 acres. The crematorium was added to the site in 1962. There are 109 Commonwealth burials of the First World War here, including 1 unidentified burial. There are a further 83 burials of the Second World War, 5 of which are unidentified. There are also 5 Foreign National war burials here. The nationalities of the war casualties commemorated in the war cemetery are wide-ranging and include Australians, Canadians, New Zealanders, a member of the Indian Medical Corps, four members of the Polish Air Force, and one member of the Netherlands Merchant Navy. The Cross of Sacrifice stands next to the path near the entrance and was unveiled on 26 April 1925 by the Mayor of Barrow Alderman C.G.B. Ellison J.P.

Following the outbreak of the First World War, the population of Barrow swelled to 82,000 as large numbers of workers arrived to work in the local munitions industry and shipyards.

In particular, the vast complex of building known locally as the ‘Gun Shop’, located on Michaelson Road in the Barrow island area of Barrow-in-Furness, was home to the Vickers Shipbuilding and Engineering Ltd (VSEL) Heavy Engineering Workshop. An important manufacturer of military equipment before the outbreak of the First World War, the VSEL works became a vital producer of all types of munitions and equipment for the British Army and Royal Navy throughout the war. 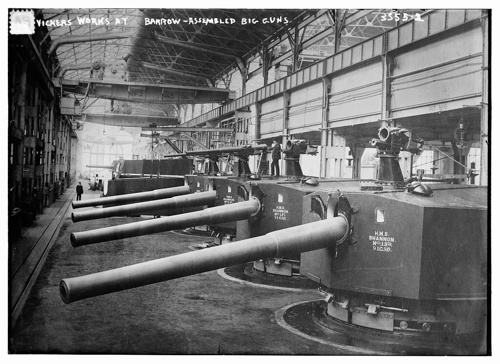 Guns being assembled for HMS Shannon in the Barrow VSEL workshop in 1906.

The munitions and shipbuilding industry in Barrow may have been the prime target of the German submarine U-21 when the vessel approached the nearby Walney Island on 29 January 1915 and opened fire at the airship station. After exchanging fire with the gun battery located at Fort Walney, with no hits on either side, the submarine withdrew.

Of the 111 First World War service personnel at rest in Thorncliffe Cemetery, 52 have a local connection to Barrow including three local boys aged only 17 years old when they died.  Another casualty with a local connection is 4th Engineering Officer James Huddleston of the Mercantile Marine, who served under the alias James Brooks and was the son of John Simpson Huddleston, of 73, Ainslie Street, Barrow-in-Furness. He died on 5 August 1918 when the ship he was serving aboard – SS Tuscan Prince – was torpedoed in the English Channel by the German submarine UC-49. He was 22 years old.

During the Second World War, Barrow-in-Furness was one of the Royal Naval Stations of the Western Approaches Command and its shipbuilding capabilities were again of great importance to the armed forces and the war effort. 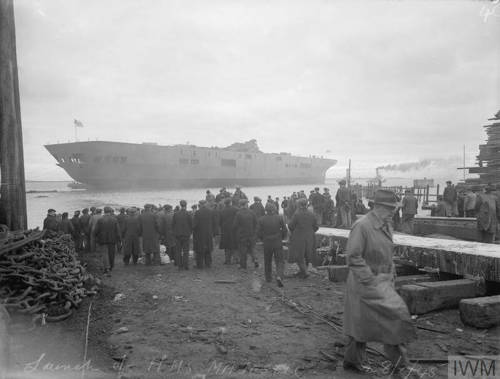 Workers watch as the newly constructed aircraft carrier HMS Majestic is launched from the Barrow shipyard, 1945 © IWM A 27629

Due to the presence of its shipbuilding industry, Barrow was among several major towns, cities, ports and industrial areas throughout Britain that were targeted by the German Luftwaffe during a period of extensive bombing raids between September 1940 and May 1941 known as “the Blitz”. As well as causing extensive damage and destruction, these bombing raids killed around 32,000 civilians and seriously injured 87,000 others.

During the Barrow Blitz, which took place primarily during April and May 1941, the VSEL shipyard and Barrow steelworks were targeted by the Luftwaffe, and many residential neighbourhoods were hit. As a result, 83 civilians were killed and more than 330 others were injured. Over 10,000 houses were damaged or destroyed in Barrow. 17 civilians killed during the Barrow Blitz are commemorated in the Commission’s Civilian War Dead Roll of Honour, including three volunteer firewatchers.

The Second World War burials in Thorncliffe Cemetery include 12 members of the Royal Canadian Navy, 4 of whom are unknown, from the River-class destroyer HMCS Sanguenay which was torpedoed on 1 December 1940 by an Italian submarine, whilst on escort duty off the west coast of Ireland. The Sanguenay managed to reach the safety of Barrow, albeit with 21 of her crew dead and most of her bow destroyed. Those members of the crew with no known grave are commemorated on the Halifax (Nova Scotia) Memorial.

The cemetery is also the final resting place of a newly married couple tragically killed in the same incident. Leading Aircraftman John Frederick Waite of the Royal Air Force Volunteer Reserve and his wife Joan Mary Waite had been married for only a week and were on their honeymoon in Barrow when John was recalled back to his base in Sussex, accompanied by Joan. On 24 June 1944, a V-1 flying bomb landed in Westminster and among those killed were John and Joan, aged only 22 and 18 years old. They were laid to rest together in Barrow-in-Furness (Thornecliffe) Cemetery and the personal inscription on John’s headstone records Joan’s name: HIS WIFE JOAN MARY AGE 18 WAS KILLED AT THE SAME TIME BY ENEMY ACTION AND RESTS WITH HIM LOVED AND REMEMBERED ALWAYS.

Located on Devonshire Road, Thorncliffe Cemetery and Crematorium is open every day between the hours of 8.00am and 8.30pm from 1st April to 31st October and between 8.00am and 6.30pm from 1st November to 31st March. The cemetery is operated by Barrow Brough Council and before visiting we recommend you consult the website of the site authority.