During the First World War, the Fusehill War Hospital was established in the old Poor Law Hospital and some schools in Carlisle. Of the 134 Commonwealth burials of the First World War, 79 are in a plot on the eastern side of Ward XI and the remainder scattered in other parts of the cemetery. There are 128 Commonwealth burials of the Second World War, around half of which are situated in the War Graves Plot, which adjoins the 1914-1918 War Plot. Many of the Second World War airmen buried here belonged to the Royal Air Force Operational Training Unit at Crosby-on-Eden. The Cross of Sacrifice stands near the junction of the 1914-1918 and 1939-1945 War Plots, serving as a central memorial for the graves of both wars. In this cemetery we care for the graves of members of Australian, Canadian, New Zealand and United Kingdom forces, along with Polish, German and Italian soldiers and airmen.

This cemetery was laid out in 1855 with offices, chapels, and lodges designed by J W H & J M Hay of Liverpool. It was later extended to the south of the Fairy Beck in 1885-1887 and again in the mid to late 20th century.

In April 1916 the Red Cross held a meeting to discuss the need for a large military hospital in the north-west. Fazakerley Hospital, Liverpool, with a 4,000-bed capacity, was overwhelmed with sick and wounded servicemen arriving from the continent and further afield. The Carlisle Board of Guardians offered the use of Fusehill Workhouse, which could be turned into a military hospital. This eventually opened in October 1917 but by then the requirement had increased to 1,000 beds so three city schools, Brook Street, Norman Street and Newtown, were also taken over, the children accommodated elsewhere. The local newspaper reported: “It is unfortunate the city schools should be required to meet the need for hospital accommodation, but the proper care of the wounded is the nation’s first obligation.” 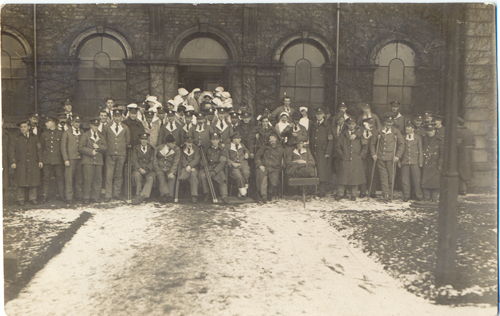 Wounded servicemen and their nurses out in the snow at Fusehill War Hospital, 1918 © Private Collection of Denis Perriam

In all, nearly 10,000 men were treated in Fusehill Hospital and the school annexes, while others were cared for in six auxiliary hospitals in the city. While most men recovered from their wounds or disease, a number died and some of these were laid to rest in Dalston Road Cemetery. There are 134 Commonwealth servicemen of the First World War buried here, half of whose graves are to be found in the war plot on the eastern side of Ward XI. Among these are two Australian and eight Canadian soldiers. The majority of the service personnel buried in the cemetery served in British army units, including more than 40 members of the Border Regiment. One notable member of the Border Regiment buried in Carlisle (Dalston Road) Cemetery is Lieutenant Colonel William Fleetwood Nash DSO who raised and commanded the Imperial Light Infantry in the Transvaal War and was later appointed Governor of Carlisle Castle. He died on 2 December 1915 from illness after a difficult operation for an internal complaint.

During the Second World War, Fusehill was once again used as a military hospital. A significant number of the 141 burials from this war are of men who were based at the Royal Air Force Operational Training Centre at Crosby-on-Eden. Initially the airfield was under RAF Fighter Command, providing day training for Hawker Hurricane pilots, but in August 1942 the station was handed over to RAF Coastal Command for the training of long-range fighter crews until 1944 when Transport Command took over the station to train Dakota crews. The Second World War plot contains about half the burials from the 1939 – 45 war, while the rest are dispersed across other Wards, including the graves of three women of the ATS.

An experimental test pilot Squadron Leader James Richard (“Toby”) Tobin is buried in Ward 18. Sec. A. Grave 14. Tobin was killed on 16 March 1945 whilst flying a Blackburn Firebrand TF Mk III DK386 to test behaviour of elevator and spring tabs in high-speed flight. During one of the dives the rear fuselage broke away at 4,000 feet from the rest of the aircraft. Tobin attempted to bale out but his parachute caught on the aircraft and he was killed in the resulting crash. He was posthumously awarded the King's Commemoration for Valuable Service in the Air.

Known locally as Carlisle Cemetery, it lies on the south-western side of the city on the road to Caldbeck at the corner of Dalston Road and Richardson Road. It covers more than 60 acres of ground and belongs to the City Corporation. The main entrance is in Richardson Road on the northern side, from which an avenue leads, over a bridge across Fairy Brook, to the War Graves Plots of both World Wars situated in the southern portion.