The men and women of the Merchant Navy sailed on hostile seas during the world wars and this memorial in the heart of London commemorates more than 36,000 who have no grave but the sea.

The war memorial at Tower Hill commemorates nearly 12,000 seaman, sailors and fishermen of the First World War and nearly 23,800 of the Second World War who have no known grave. Today it is easy to forget that London is a port city connected to the sea by the mighty river Thames and that one hundred years ago the port of London was the centre of global trade and maritime commerce. Our memorial stands in the gardens of Trinity House (the seafarer’s charity), close to the Old Billings Gate Market (the old heart of Britain’s fish trade), the port of London’s Custom House and within sight of the River Thames - an area which would have been thronged with sailors and dockers from all parts of the British Empire and beyond in years gone by.

The conduct of any war is dependent upon the availability of supplies; not only of the materials of warfare, but of everyday needs of the civilian population. Even before the First World War around half of Britain’s food was imported from abroad and while the Royal Navy and British merchant fleet was larger than any other, nearly half the steam ships afloat globally in 1914 flew the Red Ensign of the United kingdom, Britain’s reliance on food & supplies from its overseas empire was a source of potential danger. 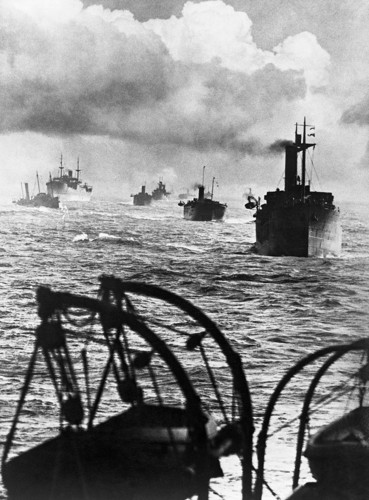 View from on board a collier of an East Coast Convoy. Merchantman steaming in line in the North Sea. © IWM HU 3349

Despite the protection afforded to them by the Commonwealth navies and air forces and by such defensive armament as they themselves carried in time of war, the merchant vessels remained highly vulnerable attack to enemy surface craft, submarines, aircraft and mines. Even in peacetime the seas and oceans can be hazardous as men battle with the elements but in wartime every voyage involves even greater danger.

This great fleet was the target for the enemy powers in their attempt to destroy the trade and the life of Britain. The merchant ships were attacked by submarines, surface vessels and aircraft; their routes to British ports were sown with mines and even in harbour they were not safe from air-raids. Even after the end of hostilities mines continued to claim some victims.

During the First World War losses of vessels were high from the outset but peaked in 1917 when in January the German government announced the adoption of "unrestricted submarine warfare". The subsequent preventative measures introduced by the Ministry of Shipping - including the setting up of the convoy system, last used during the Napoleonic Wars where, warships were used to escort merchant vessels - led to a decrease in losses but by the end of the war, 3,305 merchant ships had been lost with a total of 17,000 lives. 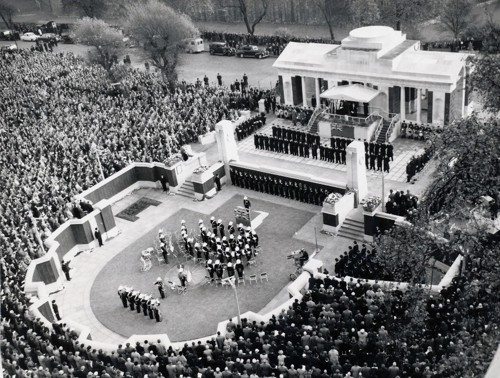 The Commission was founded in 1917, principally to care for the graves and memorials to these servicemen and women of the armed forces of Britain and the Empire who had died during the First World War. However, it was recognised that the contribution and sacrifice of those civilians of the mercantile marine (as the merchant navy was then titled) warranted commemoration in like manner in the armed forces and so the Tower Hill Memorial was raised, to commemorate those thousands civilians, who though untrained in the arts of war, met the fate of fighting men on the high seas. 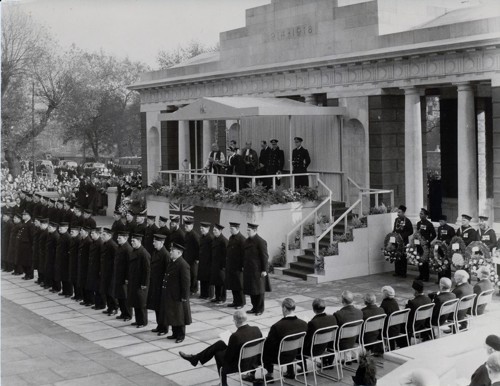 The architect chosen to design the memorial for those serving in the Merchant Navy and Fishing Fleets who lost their lives during the First World War and had no known grave was Sir Edwin Lutyens. 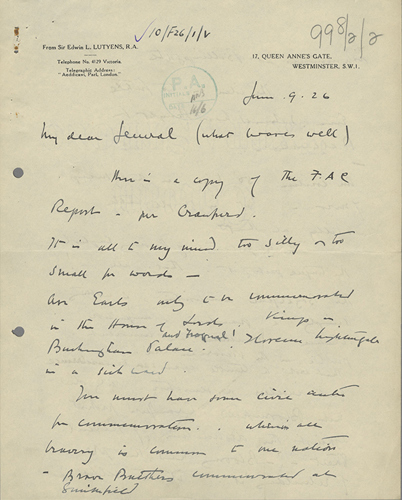 The memorial which was constructed at Tower Hill however is not what Lutyens originally envisaged, being both different in terms of its design and location.

Lutyens’ original proposal would have seen a stepped memorial, made of Portland stone and granite, erected on the waterfront at the Temple Pier, Embankment, with the 12,000 names of the missing engraved on the sides of eight great piers.

Lutyens plans ran fowl of the Royal Fine Art Commission however, who objected to the proposal. They suggested that the memorial would be better sited further downriver to the east – making the case that this would link the memorial more to the historic Port of London and would therefore have more resonance with its purpose for commemorating the Merchant Navy. The site eventually chosen was Trinity Gardens, Tower Hill.

Lutyens, who was still committed to the project, was not best pleased with the Royal Fine Art Commission’s decision, believing that the new location for the memorial was not as prestigious or visible a site, commenting in a letter to IWGC Vice Chairman Fabian Ware:

“It is all to my mind too silly & too small for words. Are Earls only to be commemorated in the House of Lords, Kings in Buckingham Palace……. Florence Nightingale in a sick ward…….

We want a civic centre where men who have served the Empire are commemorated & the Embankment would be such a place, not hide & corner brave men because they happen to have been low in social status. The beggar says I in Parliament Square, the Earls at Shoreditch or better to the Tower.” 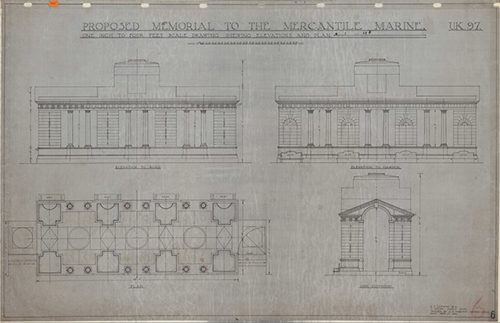 Lutyens did not waste any time in coming up with a new design for the memorial, and even before the site at Trinity Gardens had been officially confirmed, created this proposal based on its new location. 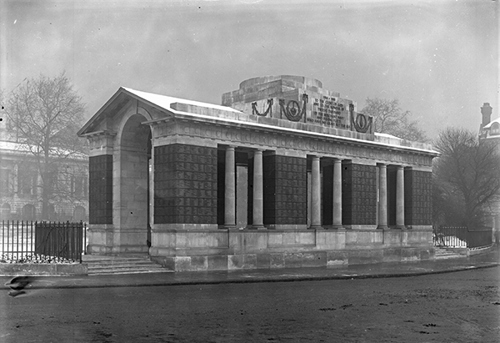 This design would ultimately be constructed at Tower Hill. The finished memorial consisted of a vaulted corridor in Portland stone, open at either end, with the names of the dead cast in bronze panels attached to the eight stone piers. Additional sculpture work was carried out by William Reid Dick.

The memorial was unveiled by Her Majesty Queen Mary on the 12th December 1928, in the presence of large numbers of families, veterans and representatives of the shipping industries and merchant navy community. During the ceremony, three widows of merchant seamen commemorated on the memorial were presented to the Queen. 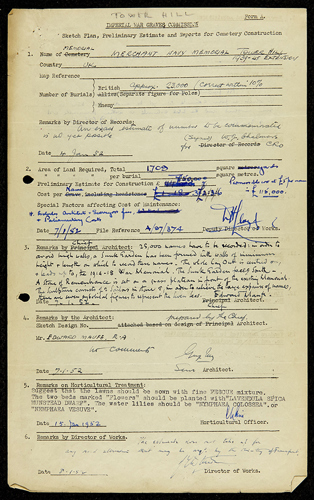 Every cemetery or memorial constructed by the CWGC has gone through a design process culminating in the official sign-off and approval of the plans by the Commission, where all aspects of the design, costs, horticultural treatment and land acquisition are assessed. In this approval form for the construction of the Tower Hill Memorial 1939-45 Extension, the architect, Sir Edward Maufe, has explained why he has designed the extension in the form of a sunken garden:

“25,000 names have to be recorded: in order to avoid high walls, a sunken garden has been formed with walls of minimum height and length on which to record the names. The whole lay out is centred on, and leads up to, the 1914-18 War Memorial” 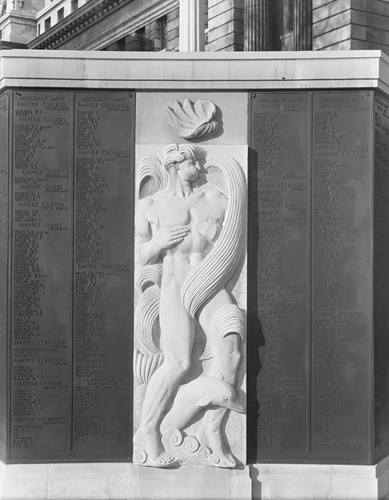 The new extension to the memorial incorporated a number of sculptures by Charles Wheeler, including seven allegorical figures representing the Seven Seas. The one shown here represents the Atlantic Ocean.

Wheeler also produced two sculpted figures of sailors which stand at either end of the memorial wall. The figures, in order to avoid any overt indication of either rank or naval service, were depicted in outdoor clothes. 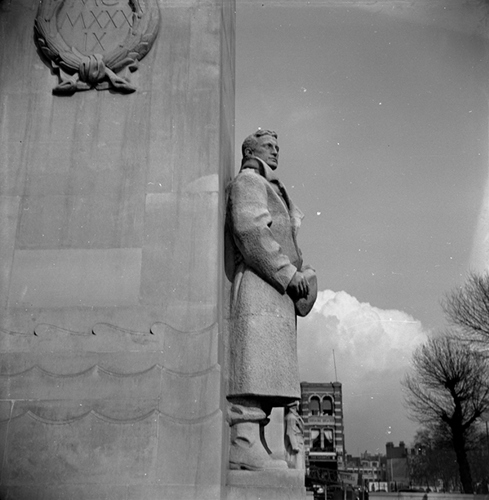 These architectural drawings of the Tower Hill Memorial were produced by Sir Edward Maufe to illustrate his plans for the site. 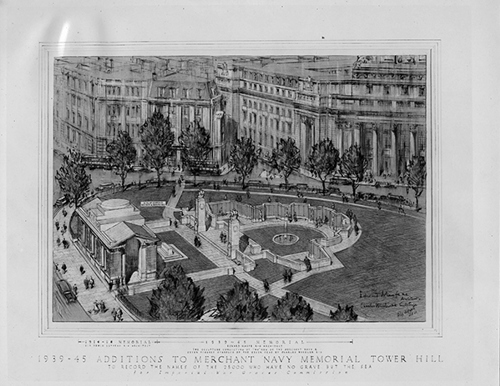 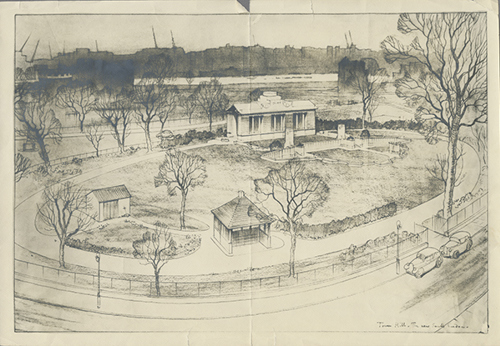 Interestingly, the earlier drawing includes a Stone of Remembrance which Maufe originally planned to add to the site as part of his scheme. This idea was later abandoned, as can be seen from the second, later drawing, although a “Stone of Remembrance” style block, on which was engraved the dedicatory text for the extension, was incorporated into the final design.

The Second World War extension to the memorial was unveiled by Her Majesty The Queen on Saturday 5th November 1955. An estimated 16,000 relatives attended the ceremony, including a party of 150 mothers and widows who had travelled from Denmark, and it was broadcast live on the BBC. The Radio Times for that week came with the Order of Ceremony printed in it, so that relatives who couldn’t come to the unveiling themselves would be able to participate in the service in their own homes. 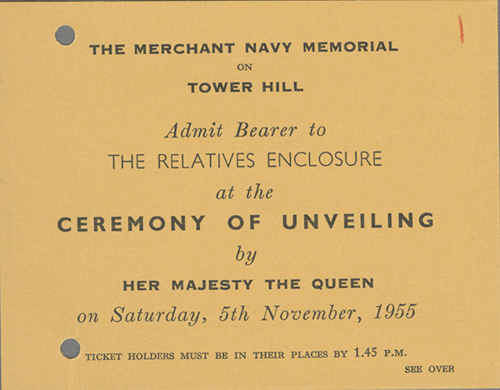 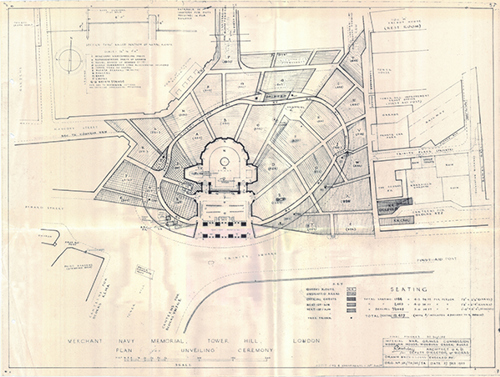 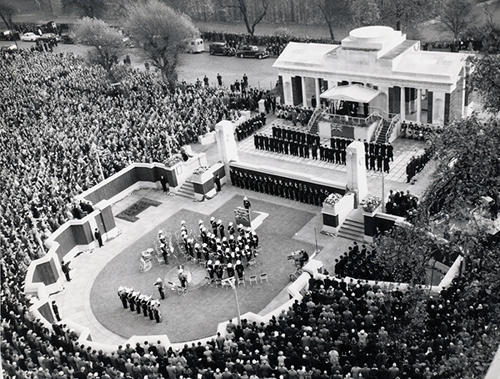 The memorial stands on the south side of the garden of Trinity Square, London, close to The Tower of London. The Memorial Register may be consulted at Trinity House Corporation, Trinity Square (Cooper's Row entrance), Tower Hill, London EC3N 4DH, which will be found behind the Memorial.

Join The Foundation
City of London Cemetery and Crematorium