Situated in the heart of East London, the City of London Cemetery and Crematorium is one of the largest municipal cemeteries in Europe and you will find more than 700 service personnel buried and commemorated here.

Designated Grade I on the Historic England National Register of Historic Parks and Gardens, this war cemetery is the final resting place of many servicemen and women who were treated at hospitals in London and around the United Kingdom, including some located in the City, Bethnal Green, Mile End and Whitechapel, Brighton and Suffolk.

Find the casualties commemorated at the City of London Cemetery

There were two major hospitals in the City of London during the First World War: the City of London Military Hospital, which had accommodation for over 700 patients and the City of London Red Cross Hospital, which opened in October 1915 in Buecker’s Hotel, Finsbury Square, with over 100 beds. In March 1915 the Bethnal Green Infirmary was taken over by the London District Command and renamed Bethnal Green War Hospital. It too had over 700 beds and treated thousands of servicemen over the course of the war. These hospitals received wounded and ill servicemen directly from the Western Front via ambulance train and hospital ship. Most of the men treated would recover but a small number died and some of those men are buried here.

The majority of the servicemen commemorated here are from the United Kingdom but there are also Australians, New Zealanders and Canadians, reflecting the great contribution made to the war effort by those countries. In all there are some 323 service burials from the First World War, many named on a screen wall as their graves cannot be marked individually. Among the First World War burials is Staff Nurse Ellen Louise Smithies who was invalided home from France and died on 22 February 1919 aged 34.

During the Second World War, many major towns and cities in Britain including London were targeted in a bombing campaign by the German Luftwaffe between September 1940 and June 1941 in what become known as the “Blitz” and this led to the widespread destruction of infrastructure and the deaths of over 40,000 civilians. A number of bombs dropped during the Blitz landed in the City of London Cemetery, including one which damaged the section that had been set aside early in the war for service burials. The damaged service plot was quickly restored and re-turfed.

In October 1951, permission was given for the Commission to erect a Cross of Sacrifice and a Screen Wall commemorating the members of Commonwealth forces who died during the Second World War and were buried or cremated at this cemetery. 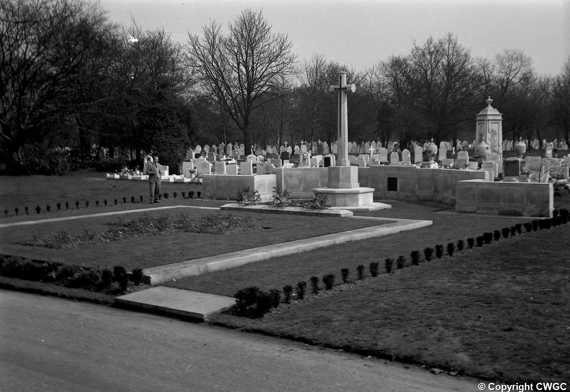 Cross of Sacrifice and screen wall at City of London Cemetery, April 1954 © CWGC

Today in this plot and throughout the cemetery, 400 servicemen and women of the Second World War are commemorated, including 70 who were cremated in the City of London Crematorium. Flight Sergeant George Edward Alfred Pendrill, who is buried in Square 292 Grave 105568, was awarded the Distinguished Flying Operation medal on 2 December 1941 but he died on 18 December 1941 whilst returning from a raid on Axis shipping in Brest, France. The Avro Manchester aircraft in which he was travelling was damaged by flak and overran the runway at RAF Conningsby, crashing and killing all crewmembers on board. Pendrill was 21 years old.

Located in North East London, the nearest railway station is Manor Park. By road, access to the cemetery is from A116 and there is parking on site. Before visiting we recommend that you visit