The cemetery is the final resting place of close to 600 servicemen and women of both world wars, their graves scattered throughout the cemetery or arranged in small war plots. Over half of those buried in the cemetery are now named on screen walls as their graves cannot be individually marked.

Situated to the north-east of Earlsfield Station and bounded by the Magdalen Road on the east and the main railway line on the west, Earlsfield Cemetery was established by the Wandsworth Burial Board in 1878 and enlarged in 1898. The cemetery is the final resting place of close to 600 servicemen and women of both world wars, their graves scattered throughout the cemetery or arranged in small war plots. All six of our member governments are represented by service personnel remembered here, including the largest group of First World War soldiers of the Newfoundland Regiment in any war cemetery in the UK.

Many of the 475 servicemen of the First World War buried here died in the 3rd London General Hospital. This was one of four Territorial Army general hospitals in London and was housed primarily in the buildings of the Royal Victoria Patriotic School with sections in other facilities in south-west London. The school had been built after the Crimean War to educate orphaned daughters of servicemen and needed considerable alteration in order to be suitable for its new function but by the time the first patients arrived in September 1914 it was up and running as a hospital of 200 beds. It was clear that there was a need for more accommodation and hutted wards were built on the grounds. This area became known as ‘bungalow town’ and by 1917 housed 1,600 patients. 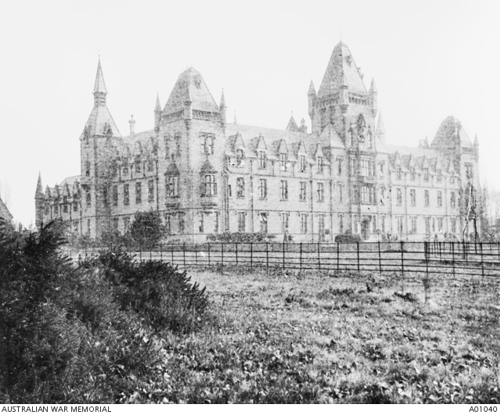 Exterior view of the building which was occupied by the 3rd (London) General Hospital during the First World War. © AWM A01040

Patients treated in Wandsworth usually arrived by train at a special temporary station built close to the main building. Stretcher cases were then transferred by members of the 60,000-strong London Ambulance Column. These men and women, all civilian volunteers, held regular jobs while being on call at any time to help with trainloads of injured or sick men. Another volunteer at the hospital was the sculptor, Frances Derwent Wood. Too old to enlist, he offered his services to the War Office and became a pioneer in creating prosthetic masks for men with severe facial injuries.

Informal portrait of nine wounded soldiers and two nurses in a ward at the 3rd London General Hospital. © AWM PO8414.011

Over the course of the war more than 62,000 patients were treated at the 3rd London General Hospital, from all over the Empire, and the burials here reflect this where there are South Africans, Australians, New Zealanders, one member of the Indian Army, and a number of Canadians, including a nurse from Brigus, Newfoundland. One notable First World War burial in the cemetery is Private John Collis, who received the Victoria Cross in the Second Anglo-Afghan War in 1880 but was later stripped of his medal on 18 November 1895 after being convicted of bigamy. Collis then enlisted as a Private in the Suffolk Regiment during the First World War and died aged 62 of a heart attack at Battersea Hospital on 29 June 1918. Collis’s grave remained as an unmarked pauper’s grave for 80 years until a Commission headstone was erected on 22 May 1998 which bears the Victoria Cross emblem. 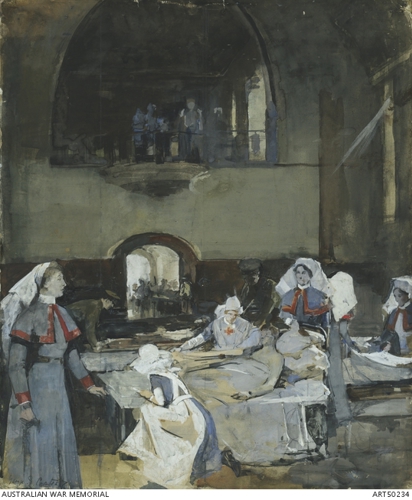 The remains of two air-raid shelters in the cemetery are London’s legacy of the Blitz during the Second World War when German bombers targeted major towns and cities in Britain, causing widespread devastation and over 40,000 civilian deaths. Over 738 high explosive bombs were dropped in the borough of Wandsworth alone during the Blitz, 13 of which were recorded in Earlsfield. On 8 November 1940, a Luftwaffe bomb hit the cemetery itself, causing damage to a large number of civil graves as well as one Commission headstone - Rifleman Gilbert Wylde (Block 2, Grave 5674) - which was broken in two. It was replaced by 1951.

The 115 Second World War burials are scattered throughout the cemetery but there is one group of six burials together in a War Plot near the main entrance. Among the Second World War graves are three members of the Women’s Auxiliary Air Force, including Corporal Lillian Berthe Sharpe whose headstone bears the following personal inscription chosen by her mother: ‘ONE OF OUR CHOICEST BLOOMS CHRIST PICKED FOR HIMSELF. LOVE LASTS. MOTHER’.

The nearest railway station to Wandsworth Cemetery is Earlsfield, the cemetery entrance being just a short walk from the station. Before you visit, we recommend you visit:

City of London Cemetery and Crematorium
Nunhead (All Saints) Cemetery