From ship building on the Clyde to hospitals based in the city, Glasgow was a major hub of military activity during both world wars and today there are almost 500 service personnel at rest in Glasgow Western Necropolis.

Glasgow was one of the ports of embarkation for the British Expeditionary Force in 1914 and several military hospitals opened in the city during the First World War, including the 3rd and 4th Scottish General, and the Merryflats War Hospital. Battalions of a number of Scottish regiments had their headquarters in Glasgow during both wars, most notably the Highland Light Infantry. The Clydeside shipyards were targeted by German bombers during the Blitz in the Second World War, and Glasgow suffered a particularly ferocious attack on the night of 13/14 March 1941 when many civilians and servicepeople were killed.

Today there are almost 500 service personnel of both world wars at rest in the cemetery. Many of them are grouped together in Section P, with a small group of Australian graves in Section N. A screen wall near the main entrance carries the badges of the regiments represented in Sections P and H. The 124 Second World War burials are scattered throughout the cemetery.

A number of recruiting depots of Scottish regiments were based in Glasgow during both world wars, most notably the Royal Scots Fusiliers and the Highland Light Infantry (HLI). These regiments raised many new battalions for the expanded British Army of the First World War. One HLI battalion, the 16th, had many former members of the Glasgow Boy’s Brigade, while men of the Glasgow Tramways made up the 15th.

Several military hospitals opened in Glasgow during the First World War. Stobhill Hospital, a large poor law hospital built in 1903 – 4, had accommodation for 2,000 beds. It was requisitioned on 4 August 1914, the day the United Kingdom declared war, and was expanded to become the 3rd and 4th Scottish General Hospitals, housing 2,400 beds. The Western District Hospital was also taken over for military use, as was Springburn Hospital (now North Glasgow College), and facilities in Govan which became Merryflats War Hospital.

Hundreds of wounded soldiers at a time would arrive by ambulance train, and temporary platforms were built in some places to better connect the railways with the hospitals receiving casualties. Those who did not recover were buried in cemeteries in the city, if their families did not request otherwise.

Glasgow Western Necropolis contains more than 350 First World War burials, many of them grouped together in Section P. These include more than 20 Canadian servicemen from Vancouver Island to Newfoundland, some of whom were Americans who had enlisted in Canadian units. A small plot in Section N is made up of all but one of the Australian graves in the cemetery, the final resting place of men from farms, country towns and cities in Queensland, Victoria, and Western Australia. Many war graves in the cemetery date from the post-war era and represent men who died in the influenza, or ‘Spanish Flu’, pandemic, that killed as many as 50 million people worldwide.

During the Second World War the Clydeside shipyards were targeted by German bombers. On the night of 13 – 14 March 1941, Glasgow suffered a particularly ferocious attack and many civilians as well as service personnel were killed. There are 124 Second World War burials here, the majority scattered throughout the cemetery, although some were added to the existing war plots from the First World War.

The work of registering and marking war graves in the United Kingdom could be a complicated process, involving the Commission, cemetery companies, local authorities, the military and individual grave owners. These early letters from CWGC Regional Inspector William McIndoe, dating from November 1922, highlight some of the different ownership and burial rights which applied to the war graves in Glasgow Western Necropolis. 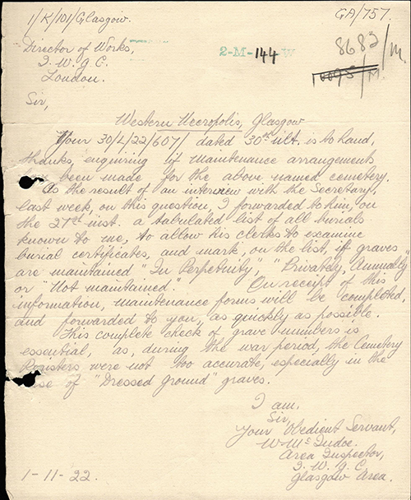 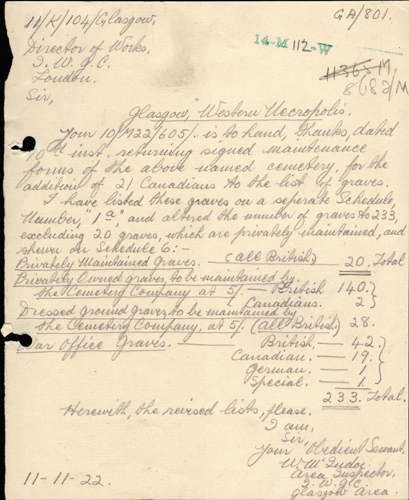 Many of the war dead buried in Glasgow Western Necropolis were laid to rest in grave spaces or ‘lairs’ owned by the military authorities, which were used to accommodate several burials. As a result, when the CWGC came to erect permanent grave markers, multiple names and details needed to be inscribed on the individual headstones, and there was no room available to engrave the regimental badges which are normally to be found on them. 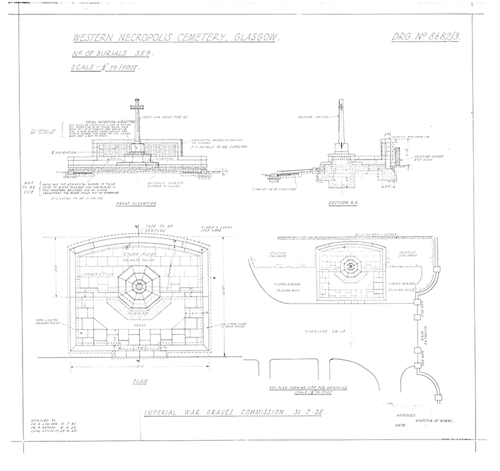 The Commission came up with a solution to this problem by constructing a screen wall feature behind the Cross of Sacrifice which included engravings of all the regimental badges which couldn’t be included on the headstones. As can be seen from this original architectural drawing, the design was approved by Sir Robert Lorimer, the Commission’s Principal Architect for the United Kingdom and Sir Frederic Kenyon, the Commission’s Artistic Adviser, as well as the local authorities, in 1925. 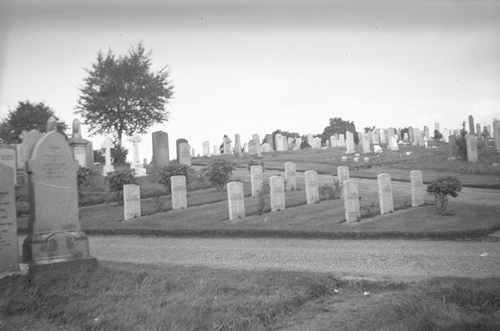 Another interesting feature of the cemetery is the small plot for Australian First World War soldiers which can be found in Section N. These soldiers were originally buried elsewhere in the cemetery, but after the end of the war they were exhumed and buried together in one plot at the request of the Australian authorities. In this image from 1951 it may be noted that there is a gap in the back row, but visitors to the site today will find that that gap has been filled, keep reading to find out why. 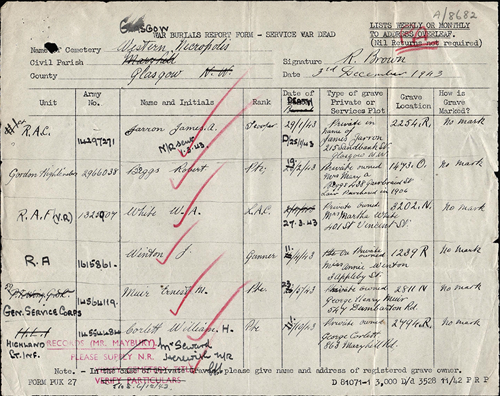 During the Second World War the Commission requested that records of any war burials that had taken place within the UK be sent directly to them. This work was often undertaken not by CWGC staff, but by caretakers in the employ of cemetery companies or local authorities, or by individual clergymen. Robert Brown, the cemetery superintendent for Glasgow Western Necropolis during the war, who it was noted had ‘always taken a special interest in the War Graves’ had more reason than most to ensure the correct and prompt return of such records. Robert was an ex-Commission gardener, having worked in Bethune, France from 1920-1930, and had seen service in the First World War as a private in the Black Watch. His knowledge and experience were a great asset to the Commission’s Regional Inspector Captain William McIndoe. 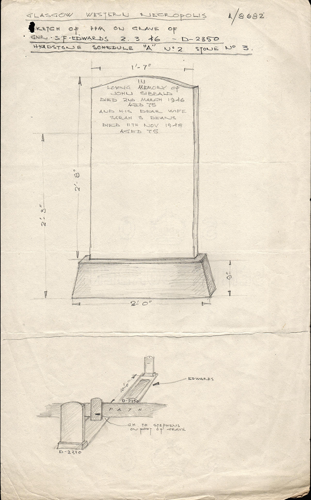 As was often the case in cemeteries in the UK, families of the war dead sometimes preferred to erect their own private memorial on their loved one’s grave. This did not however always mean that they did not also want a Commission headstone, as was the case of Gunner Stanley Frederick Edwards, whose grave was originally marked with a large private memorial, and a Commission headstone 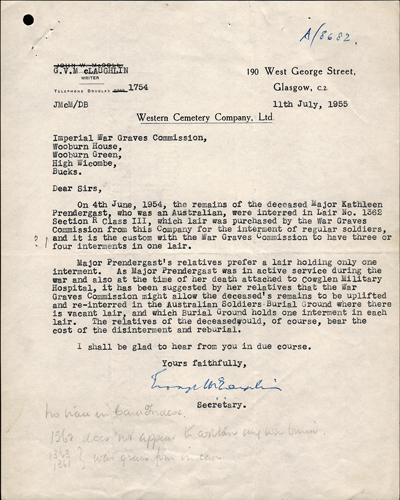 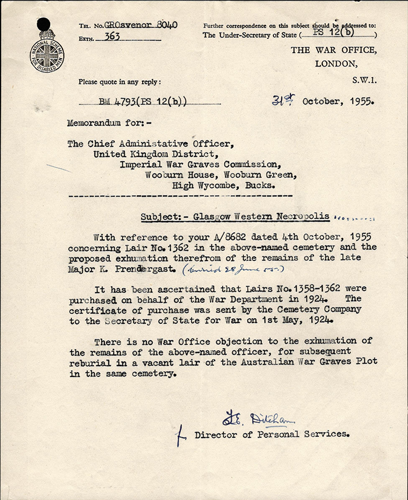 When the small Australian plot in the cemetery was created at the end of the First World War, it contained the graves of 11 Australian soldiers. Visitors to the plot today will notice that there are now 12 graves, but one of the headstones is slightly different. The 12th burial to take place in the plot was that of Major Kathleen Laura Prendergast, of the Royal Army Medical Corps, who died in June 1954, and who’s grave the Commission now maintains on behalf of the MOD. In 1944, after completing her medical certificate, she was appointed to the British Army of the Rhine with the rank of captain, and in 1947 was appointed as Regimental Medical Officer to the 1st Battalion, The Black Watch, the first, and at the time of her death, the only woman to hold this role in the British Army. She later transferred to the RAMC, and at the time of her death was working in Cowglen Military Hospital in Glasgow, treating injured soldiers. Australian by birth, her family specially requested that she could be laid to rest with her countrymen in the plot in Glasgow Western Necropolis, where her grave can be seen in the middle of the back row of the plot.

The Western Necropolis is a large cemetery complex north of Glasgow city centre. Adjoining this site are the large Lambhill and St Kentigerns cemeteries and Garnetill Hebrew Congregational Burial Ground. Our memorial recording the names of servicemen cremated at the Glasgow Crematorium is within the Western Necropolis. Taken together, we commemorate over 1,000 Commonwealth servicemen and women in this corner of Glasgow.

Vehicle access is prohibited to all sites in the evenings with gates closing at 17.00hr in winter and 18.00hr in the summer; pedestrian access is still possible.