Oban (Pennyfuir) Cemetery contains 23 Commonwealth burials of the First World War and a further 58 of the Second World War, including 8 unidentified seamen of the Merchant Navy and 4 unidentified sailors of the Royal Navy, as well as 1 Dutch merchant seaman and 4 non-war Service burials.

Located half a mile northeast of Oban, Oban (Pennyfuir) Cemetery contains 23 Commonwealth burials of the First World War and a further 58 of the Second World War, including 8 unidentified seamen of the Merchant Navy and 4 unidentified sailors of the Royal Navy. Four of the Second World War graves are of airmen who were killed in the same crash as HRH Prince George, Duke of Kent, on 25 August 1942. There are also 4 non-war burials here and the grave of Akram Mosumul Ali Hug, an Indonesian national who died whilst serving with the Dutch Merchant Navy in the Second World War. The Cross of Sacrifice stands in the centre of the war cemetery and is constructed from white Portland stone.

Many of the First World War burials in the cemetery are men who died from wounds received in action or illnesses and were laid to rest here by their loved ones, such as Assistant Paymaster James R. Gordon. James served with the Royal Naval Reserve and was the son of a local distiller. He died at the Royal Naval Hospital in Chatham on 20 February 1918, and his loved ones requested he be laid to rest in Oban.

Others buried here were killed in action or in training accidents in and around the United Kingdom. On 3 April 1917, HMS Jason, an Alarm-class torpedo gunboat converted into a minesweeper, was conducting operations when she struck a mine off Coll in the Inner Hebrides. Jason sank, killing 30 of the crew, including Stoker 1st Class James Blackman, who is buried in the cemetery.  Blackman is one of three of the Jason’s crew killed in the incident to be buried here. The remainder of James’s fallen comrades have no grave but the sea and are commemorated on the CWGC Naval Memorials. 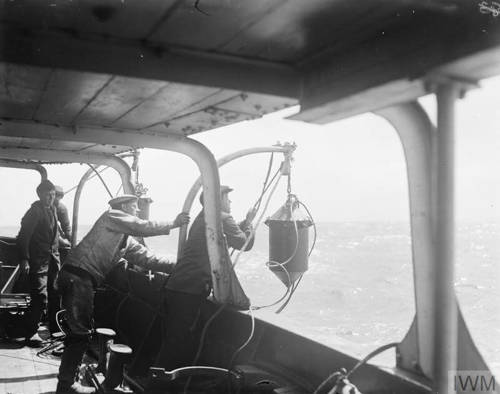 Sailors hoisting cut mines attached to the sweep on board an armed trawler during minesweeping operations. © IWM Q 18988

During the Second World War, Oban was an important base for Royal Navy and Merchant Navy vessels in the Battle of the Atlantic, the longest continuous military campaign of the war. The Royal Navy also had a signal station near Ganavan, and an anti-submarine indicator loop station, which detected enemy surface and submarine vessels between Oban, Mull and Lismore. At the northern end of the island of Kerrera was RAF Oban, a Royal Air Force flying boat base, from which anti-submarine patrols, convoy escorts and ferry services operated. 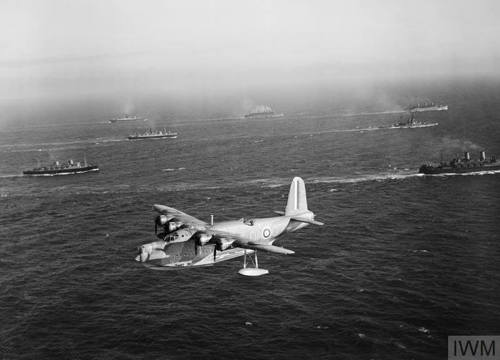 A Short Sunderland Mk I flying boat of No. 210 Squadron RAF based at Oban in Scotland, patrols over a Canadian troop convoy on its way to Greenock, 31 July 1940. © IWM CH 832

Among the Second World War burials, one of the most notable is Wing Commander Thomas Lawton Moseley, Royal Air Force. Moseley was the commanding officer of 228 Squadron and one of the RAF's most experienced pilots having completed 1,449 flying hours. He was also a navigation specialist and a former instructor at the School of Navigation.

On 25 August 1942, Moseley and 14 others, including H.R.H. Prince George, the Duke of Kent, took off in a RAF Short Sunderland flying boat from Invergordon to Iceland. The aircraft crashed into a hillside known as Eagle's Rock near Dunbeath, Caithness. All the crew except one were killed, including the Duke of Kent. The death of Prince George marked the first time in more than 450 years that a member of the royal family died on active service. His body was buried in the Royal Burial Ground at Frogmore, Windsor. Wing Commander Moseley and three others of the crew were laid to rest in Oban (Pennyfuir) Cemetery.

The cemetery is located on the A85, one mile north of Oban town Centre. There is a car park opposite the entrance to the cemetery.

Before visiting we recommend you consult the website of the cemetery authority.