Ayr Cemetery lies just half a mile east of Ayr town centre, close to the River Ayr. Opened in 1862, today we commemorate over 200 Commonwealth servicemen and women here. It may surprise you to learn that Ayr had strong trans-Atlantic military connections during both world wars.

As a key port on the west coast of Scotland, Ayr was accustomed to trade with North and South America in the 19th and early 20th centuries. The First World War brought soldiers from across the Atlantic as well. During the First World War the Newfoundland Regiment established their depot in Ayr, and today you will find headstones which bear the Caribou badge of the Newfoundland Regiment in this war cemetery. The majority of the First World War burials are dotted around the cemetery, while the Second World War graves are in several special groups. A War Cross can be found in the Old Ground, near the main entrance.

The town of Ayr has a longstanding association with the Royal Scots Fusiliers, dating back to 1873 when Ayr Barracks, formally close to the seafront where the Citadel Leisure Centre now stands, became their regimental headquarters. The regiment was recruited from the town and surrounding country, and 43 of the servicemen buried in the cemetery served with the Royal Scots Fusiliers. In 1942, Ayr barracks was renamed Churchill Barracks, in honour of the then Prime Minister, Winston Churchill, who served with the regiment for a time during the First World War. 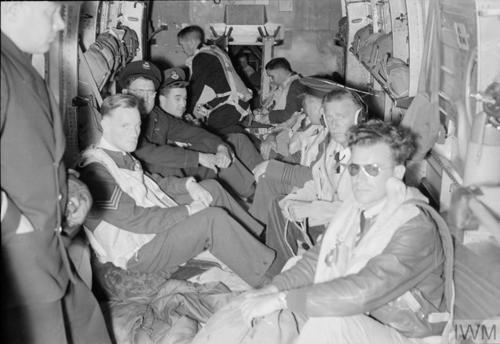 Another unit with a strong connection to the town of Ayr is the Newfoundland Regiment; at the time of the First World War, Newfoundland was a separate Dominion within the British Empire and sent a contingent of servicemen to Europe. The regiment established its reserve depot in Ayr, where troops were stationed and trained before being sent to join the frontline battalion, which served briefly in Gallipoli, Egypt and then the Western Front. The Newfoundlanders were well received by the locals, and many marriages took place between servicemen and local women. In 1915, the Prime Minister of Newfoundland visited Ayr and gifted a stuffed caribou head to the people of Ayr in gratitude of their hospitality, which is today held by South Ayrshire Council’s Museum.

A number of Newfoundlanders died while stationed in Ayr and 14 are buried in the cemetery, grouped together in a plot marked by a Celtic cross. A memorial stone located here is dedicated to 12 other Newfoundlanders who are buried elsewhere in Scotland. 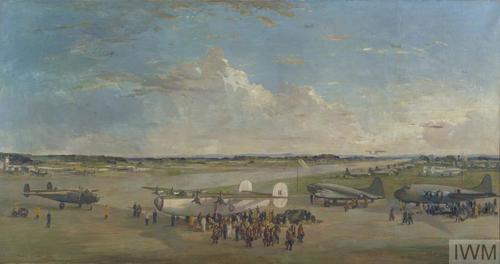 There are also four United States servicemen buried in the cemetery, who died in 1918 when American forces were being transported via the UK before being deployed to the Western Front.

During the Second World War, Ayr again saw an influx of Americans as the nearby RAF Prestwick, which was located adjacent to Glasgow Prestwick Airport, was the eastern terminus for the North Atlantic air ferry route. The ferry saw newly constructed aircraft flown from the factories in America, via Canada, to the United Kingdom. On 14 August 1941, a Liberator bomber, transporting 17 aircrew and one civilian, crashed during take-off from RAF Prestwick killing all eighteen passengers and four crew, eleven of whom are buried together at Ayr Cemetery. Twelve of the aircrew were Americans serving with either the Air Transport Auxiliary or the Royal Air Force Ferry Command, nine of whom were later reburied in Cambridge American Cemetery, while three were repatriated to the United States. 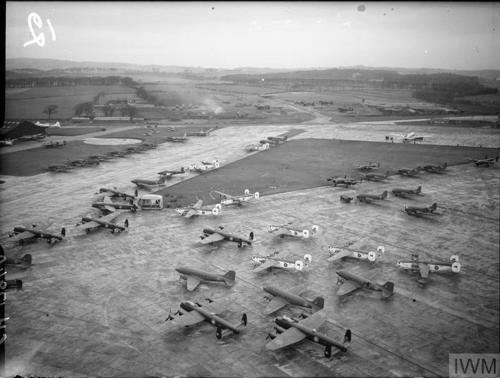 There are also four service women buried in the cemetery, two from the Auxiliary Territorial Service and one each from the Voluntary Aid Detachment and Women's Royal Naval Service.

During the First World War, Ayr had a strong connection to Newfoundland, now a part of Canada, but then a separate Dominion in its own right. A reserve depot for the Newfoundland Regiment was established in the town, and men from the regiment trained here before serving in Gallipoli, Egypt and the Western Front.

A number of Newfoundlanders died while stationed in Ayr, mainly from diseases or illnesses, and were buried in a separate plot in the cemetery. 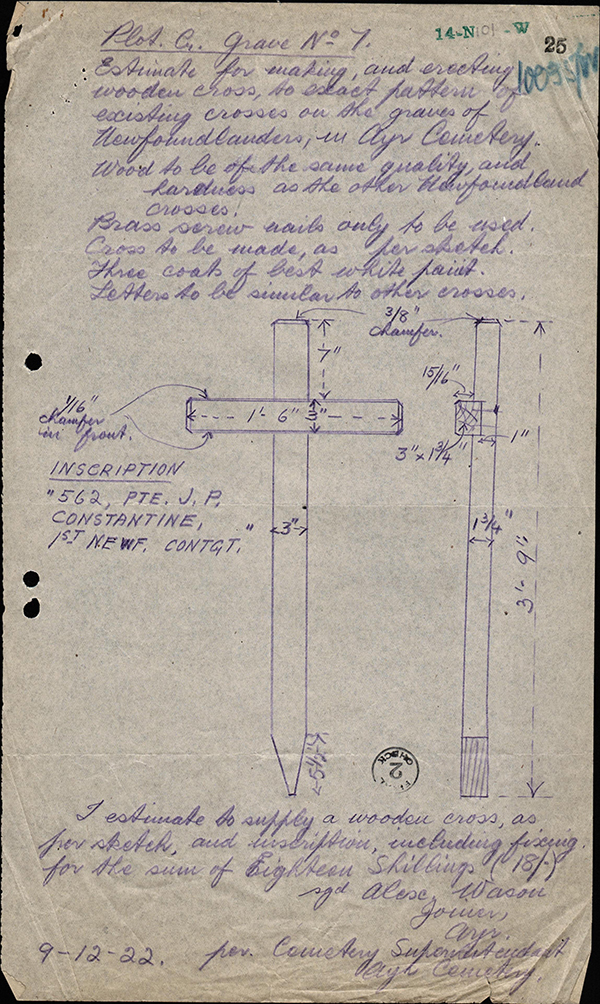 Prior to the erection of permanent headstones on the graves, military graves were marked with wooden temporary markers, which themselves would sometimes need replacing before a permanent headstone was erected. Here we can see an estimate for the cost of replacing the wooden cross on the grave of Private Peter Constantine, of the Royal Newfoundland Regiment, who died of phthisis in April 1920. 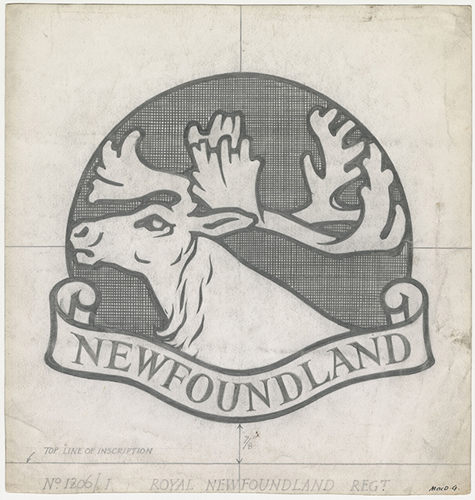 Later, his wooden cross, like that of his comrades, would be replaced with Commission headstones bearing the caribou emblem of Newfoundland.

Like a number of cemeteries in the United Kingdom which contain war graves, Ayr Cemetery has a number of separate areas which were set aside for military burials at different times, resulting in a number of distinct plots. These included the Newfoundland plot, another First World War plot, two Second World War plots and numerous scattered graves. 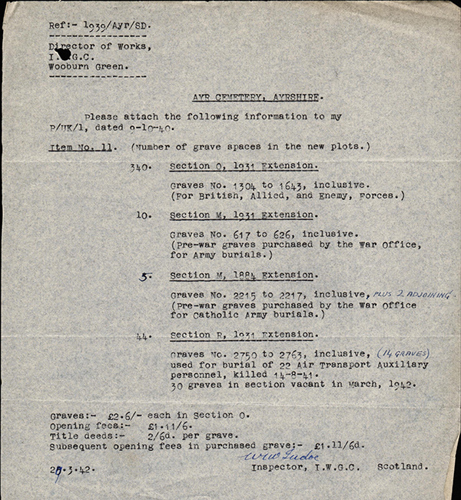 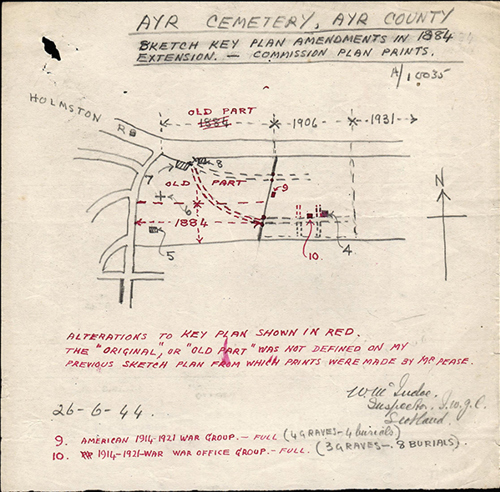 This note and sketch plan provided by the CWGC Area Inspector tried to explain the location and history of some of these plots, for better recording of the individual grave locations.

One of the Second World War plots in the cemetery includes a large collective grave containing the remains of 11 individuals.

The 11 were among passengers and crew of a Liberator bomber which crashed during take-off from RAF Prestwick on 14th August 1941, during an operation for RAF Ferry Command, killing all 22 people on board.

Initially, all the victims of the accident were buried in the collective grave, but after the war 11 American personnel were exhumed and either reburied in Cambridge American Cemetery or repatriated to the USA. 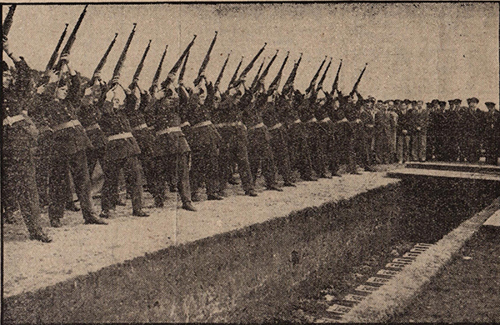 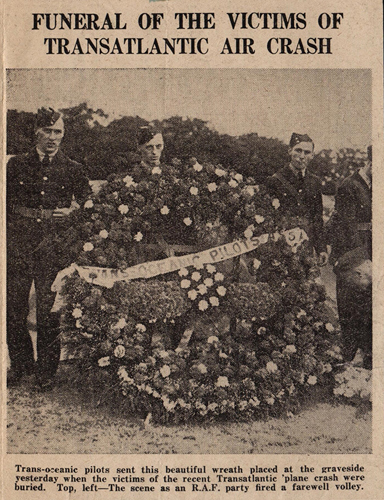 These cuttings from newspapers at the time show the original burial service conducted for the 22 casualties. 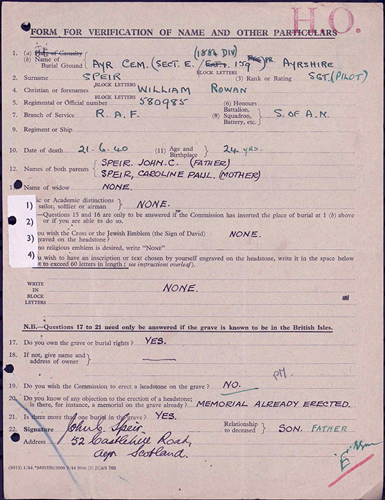 In 1943 this plan was drawn up by the Commission for the proposed treatment of future military burials in the cemetery. A plot, with specific sections set aside for the different military branches, as well as sections for allied and enemy graves, was envisioned. In the end the plan was not put into action, in part because the number of military burials made in the site in the latter years of the war did not require the creation of this additional plot.

While it is not unusual to find family connections amongst the 1.7 million individuals commemorated by the CWGC, it is more unusual to find members of the same family, killed in different conflicts, buried in the same grave, but this is the case for one war grave in Ayr Cemetery.

2nd Lt. Gordon Speir, RAF, was killed in April 1918 in a training accident when on his second solo flight. A native of Ayr, he was buried in a family grave marked with a private memorial. 22 years later, his nephew Sgt. William Rowan Speir, also serving in the RAF, was also killed in a training flight when his plane was approaching to land near Monkton, Ayrshire. Like his uncle before him, he was laid to rest in the family grave in Ayr Cemetery. 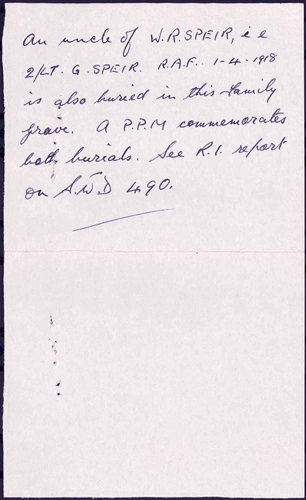 Ayr Cemetery is located to the east of Ayr town centre. The main entrance is directly from Holmston Road. The cemetery has a sizeable plot along the left-hand side of this road, with the main entrance at the far end (the town end).