Kilchoman is unusual not only for its remote location on the island of Islay, but because it is also one of only a few CWGC owned war cemeteries in the United Kingdom. It was established in late 1918 for the burial of British and United States servicemen who had washed ashore following the sinking of HMS Otranto off Islay in October 1918. Today, Kilchoman contains the graves of 74 British servicemen. 71 of these men are crewmen of the Otranto, of whom 43 remain unidentified, while the other three were interred in the cemetery after the war.

Go on a virtual tour of Kilchoman Military Cemetery

Kilchoman Military Cemetery is approximately 12 miles west of Bowmore, the main town on the island, and is only accessible by car ferry from the Scottish mainland or by plane from Glasgow. Because of it's remote location CWGC's Public Engagement Coordinator for the South & West of Scotland, Sehar Sardar, has created a virtual tour of the site so you can explore it from the comfort of your own home.

The Otranto was a former civilian passenger liner requisitioned by the Royal Navy for use as an armed merchant cruiser in August 1914. She served on convoy protection duty for most of the war before being converted for troop transport in July 1918. On 25 September, the Otranto departed New York, serving as the flagship for Convoy HX-50 which consisted of 13 ships carrying almost 20,000 US troops bound for the Western Front via the United Kingdom.

On 4 October, as the convoy was approaching the North Channel, a great storm blew up. By the morning of 6 October, the seas had become mountainous and visibility was appalling in the slashing wind and rain. Land was sighted in the murk and the Otranto steered hard to port while SS Kashmir, another liner carrying troops, turned to starboard and at about 8.45am the two ships collided.

Otranto began taking on water but launching lifeboats into the crashing waves would have been perilous. Miraculously, half an hour later the destroyer HMS Mounsey, which had been searching for the convoy during the night, appeared. Daringly the Mounsey pulled in close to the stricken Otranto and men were able to leap from deck to deck as the Mounsey struggled to maintain her position in the heaving seas. Despite colliding several times and suffering heavy damage, the Mounsey was able to save nearly 600 men from the Otranto. But over 400 men were lost, and while some men attempted to swim the half mile to shore, only 16 survived the ordeal, assisted by the islanders who had come to aid in the rescue. 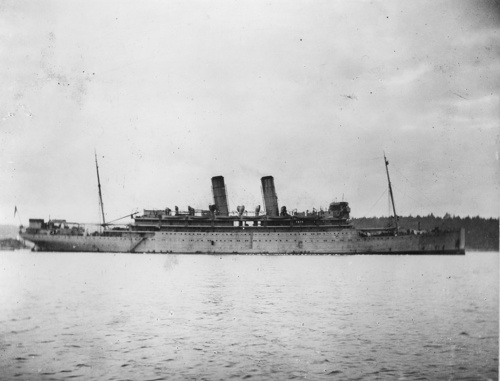 HMS Otranto, as an armed merchant cruiser, at anchor during the First World War. © IWM SP 1064

Over 300 US servicemen lost their lives, alongside 94 British sailors and marines. The remains of those who were washed ashore, some 316 US and 71 British servicemen, were buried close by to Kilchoman Church in what became CWGC Kilchoman Military Cemetery, while one British seaman was buried in Galashiels (Eastlands) Cemetery, Scotland. In 1920, the US servicemen were exhumed and either repatriated to the United States or reburied in the American Military Cemetery at Brookwood in Surrey.

Today, Kilchoman contains the graves of 74 British servicemen. 71 of these men are crewmen of the Otranto, of whom 43 remain unidentified, while the other three were interred in the cemetery after the war. Among those buried in Kilchoman is Ernest George Davidson, the captain of Otranto and commodore of Convoy HX-50. His grave is marked not by the usual CWGC headstone, but by a private memorial erected by his family, as is the grave of Engineer Lieutenant Peter Brown.  Those who were lost at sea or whose graves could not be identified are commemorated on the naval memorials at Chatham and Plymouth, 21 and 44 servicemen respectively.