One of the three great naval memorials built by the CWGC commemorate the missing of the Royal Navy from the two world wars. Here at Plymouth are named over 23,000 service personnel who have no grave but the sea.

Most of the Royal Navy’s war dead were lost or buried at sea. In the early 1920s, the Imperial (now Commonwealth) War Graves Commission built war memorials at Portsmouth, Chatham and Plymouth to commemorate them by name. Each takes the form of an obelisk and were later expanded to incorporate the names of Second World War dead.

The Plymouth Naval Memorial commemorates more than 7,200 Royal Navy personnel and 75 sailors of the Royal Australian Navy who died during the First World War. Designed by Sir Robert Lorimer with sculpture by Henry Poole, it was unveiled by HRH Prince George, Duke of Kent on 29 July 1924. The Second World War Extension was designed by Sir Edward Maufe, with sculpture by Sir Charles Wheeler, and was unveiled by HRH Princess Margaret on 20 May 1954. It bears the names of nearly 16,000 Royal Navy personnel, including members of the Royal Australian Navy, South African Navy and Indian Navy.

When war broke out in August 1914, Britain and her war effort depended on the strength of the Royal Navy. Over the course of the next four years, Royal Naval personnel from Britain and her Empire played an active and vital role in the Allied war effort and suffered significant casualties across the globe. They blockaded German shipping lanes and fought major naval actions off the coast of Chile and at the Falkland Islands in 1914, and in the North Sea in 1915 and 1916. The Royal Navy also provided the army with crucial support during the Dardanelles Campaign in 1915 and protected Allied troop transports and merchant shipping by escorting convoys throughout the war, facing U-boats with torpedoes.

Over 45,000 men and women died while serving with the Royal Navy during the First World War. The majority were lost at sea and have no known grave, but the War Graves Commission were determined to find an appropriate way to commemorate these missing service personnel. When someone joined the Royal Navy they were allocated to a particular ‘manning port’ for administrative purposes. An Admiralty committee recommended that the three manning ports in Great Britain -- Plymouth, Chatham and Portsmouth -- should each have an identical memorial to bear the names of their naval personnel with no grave but the sea. These unmistakable obelisks would be seen by all vessels using these ports, keeping the dead in daily view. The Plymouth Naval Memorial, unveiled in 1924, commemorates over 7,200 naval dead of the First World War. 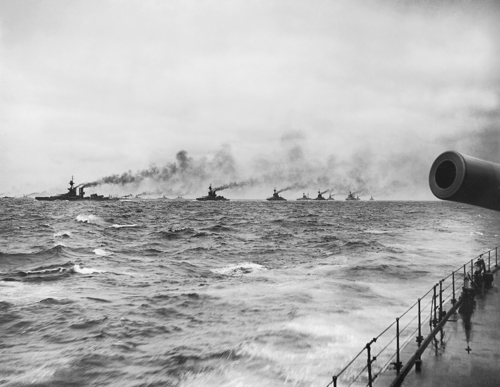 Battleships of the British Grand Fleet cruising in line in the North Sea on the eve of the Battle of Jutland, May 1916. IWM Q 18121

The largest naval action of the war, the Battle of Jutland, saw the British Grand Fleet and the German High Seas Fleet clash off the coast of Denmark on 31 May-1 June 1916. The battle raged over 72 hours, engaging over 100,000 British and German naval personnel in 250 ships. Over one-quarter of the men commemorated here at Plymouth were lost at Jutland. This includes most of the crews of the battlecruiser HMS Indefatigable and the armoured cruiser HMS Defence. Come and find their names, cast in bronze to live forever.

Members of crew on the deck of HMS Goliath, c. 1903–1915. Nearly 400 men of Goliath are named on this memorial, killed in action in the Dardanelles. Steve Morris

Fifteen years after this memorial was unveiled, the Navy was called upon once again to fight a global war. Hundreds of thousands of men and women joined up, and manpower strength rose from just 129,000 in the 1930s to over 860,000 by 1945. They served in a wide variety of roles and vessels, from converted fishing trawlers to submarines, immense battleships and aircraft carriers, and in shore establishments. Once again, the navy protected vital convoys of food, supplies and Allied troops, and engaged the enemy at sea. 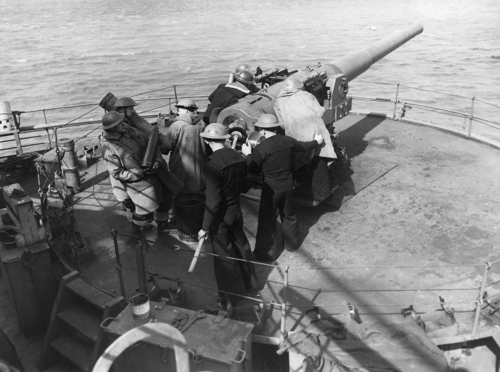 No major fleet actions occurred between British and German navies, but there were numerous encounters between vessels, like that of 8 June 1940 when HMS Glorious was sunk in the Norwegian Sea by two German battlecruisers. 1,220 men were lost. From December 1941, British and Commonwealth naval vessels faced Japanese ships and planes in the Indian and Pacific Oceans. Just three days after the attack on Pearl Harbor, HMS Repulse and HMS Prince of Wales were sunk by Japanese aircraft off the coast of Malaya, with the loss of over 700 lives. 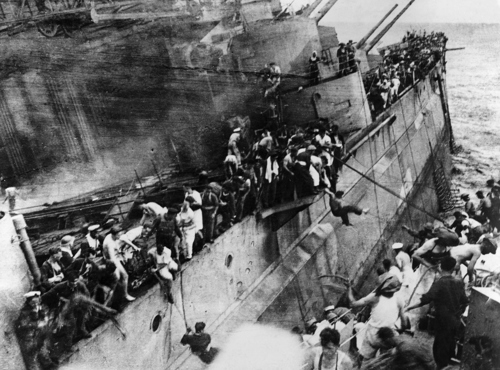 In all, almost 60,000 naval personnel died as a result of their service between 1939 and 1945. In 1946, it was decided to extend the existing naval memorials to commemorate Second World War dead. Unveiled in 1954, the Plymouth extension records the names of almost 16,000 men and women of the Commonwealth who died while serving in the Royal Navy, including most of those lost while serving aboard HMS Glorious, Prince of Wales and Repulse.

Sir Robert Lorimer was appointed the Commission’s Principal Architect for Italy, Macedonia and Egypt on 21 September 1918. He designed over 30 cemeteries and memorials for the CWGC in these regions.

In June 1921, he was appointed Principal Architect for the United Kingdom and designed the Naval Memorials at Chatham, Plymouth and Portsmouth. He left the Commission on 31 December 1927.

Outside of his work with the Commission, Lorimer designed the Scottish National War Memorial in Edinburgh. 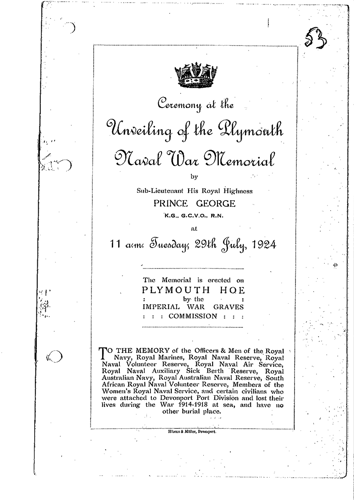 The Plymouth Naval Memorial was unveiled on the 29th July 1924 by HRH Prince George, fourth son of King George V and Queen Mary, who would later become the Duke of Kent and was the father of the CWGC’s current President HRH The Duke of Kent. In a strange twist of fate, HRH Prince George would himself become a war casualty commemorated by the CWGC when he was killed in a plane crash while serving with the RAF in 1942. He is buried in in Frogmore Royal Burial Ground in Windsor. 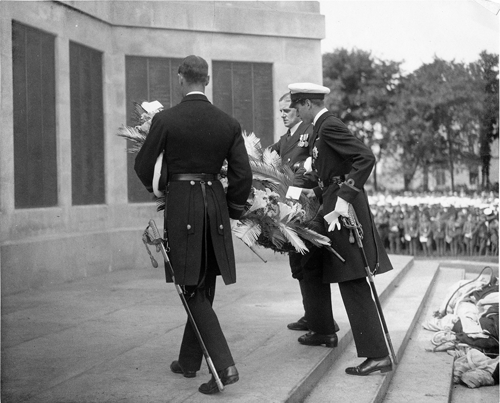 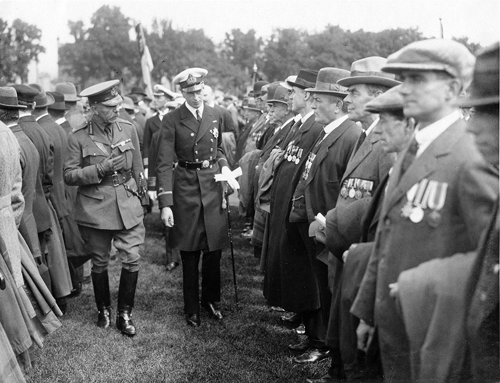 HRH Prince George laying a wreath at the unveiling of the Plymouth Naval Memorial and meeting Royal Navy veterans who attended the ceremony, 29th July 1924. 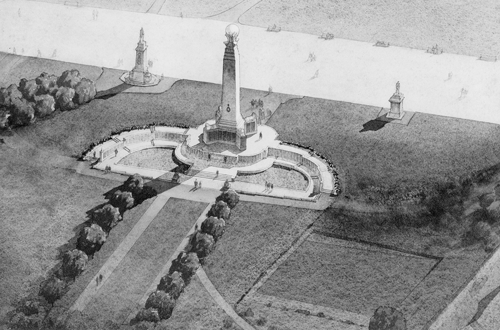 Following the Second World War, a new generation of naval casualties with no known grave required commemoration by the CWGC. The decision was taken to build extensions to the existing naval memorials where their names could be recorded, and the task for designing these extensions fell to Sir Edward Maufe, who had himself at one point served with the Royal Naval Volunteer Reserve during the First World War.

Some of most well-known contributions to the work of the CWGC include the 1939-1945 Extensions to the Naval Memorials at Chatham, Portsmouth and Plymouth as well as the extension to the Tower Hill Memorial for the Merchant Navy and the Runnymede Memorial to the Air Forces of the Commonwealth. 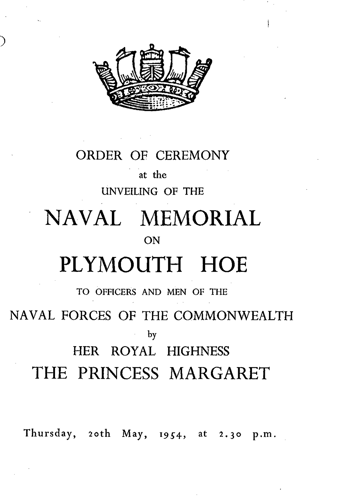 The Second World War extension to the memorial was unveiled by HRH Princess Margaret on 20 May 1954.

The Memorial is situated centrally on The Hoe which looks directly towards Plymouth Sound. It is accessible at all times. Copies of the Memorial Register are kept at the Tourist Information Office at Island House, 9 The Barbican, Plymouth, PL1 2LS, and also in the Naval Historical Section at Plymouth Library.