Located at Heavitree, off the Pinhoe Road, Exeter Higher Cemetery contains over 70,000 burials and over 12,000 memorials. Higher Cemetery was opened in 1866, and over the years the site has been expanded at least 3 times. Of the 219 First World War burials here, more than 180 forms two war graves plots near the entrance. Unusually, many of the First World War graves are marked with a recumbent slab inscribed with the initials and surname of the casualty. These markers were erected prior to the Commission erecting its own headstones. The Second World War plot contains the Cross of Sacrifice, as designed by Sir Reginald Blomfield, as well as most of the 121 Second World War burials. 62 of these graves are of different nationalities, many of whom are Polish and German, but they're also servicemen from Australia, Canada, Newfoundland and New Zealand. The rest of the graves are scattered throughout the war cemetery.

Find out more about this cemetery

Exeter became the first provincial town to receive refugees following the outbreak of the First World War, when 120 Belgian citizens arrived in the first few months and by October, more than 800 had sought sanctuary here. The city also became the site of five military hospitals administered by the Red Cross Voluntary Aid Association during the war, with the first being the West of England Eye Hospital, which took in sick and wounded men from ships disembarking at Southampton and transported by train to Queen Street Station.

Exeter Higher Cemetery is now the resting place of many men and women who died of wounds or from illness in the hospitals around Exeter during the war.  The oldest casualty commemorated here is Major George Stoker CMG. Born in 1854 in Ireland, George was the son of Abraham Stoker, of Dublin Castle, and of Charlotte Matilda Blake Stoker, of Coleraine. While George’s older brother Abraham, known as Bram, would become renowned for penning the widely acclaimed gothic horror novel Dracula in 1897, George decided to pursue medicine after completing his education at Rathmines School and the Royal College of Physicians in Dublin, where his eldest brother, Sir William Thornley Stoker was also a distinguished Surgeon and Professor of Medicine.

By 1877, George was serving as a surgeon in the Imperial Ottoman Army and Medical Officer to the Bulgarian Relief Fund. During the Russo-Turkish War (1876-1877), George acted as Chef de L’Ambulance du Croissant Rouge and was present at the sieges of Shipka, Plevna, and Erzerum. He then served in the Anglo-Zulu War (1879) and initiated and organised civil hospitals in South Africa. During his time in South Africa, George became fascinated by the medical practices used by the Zulu and he was an early pioneer of the use of oxygen in medicine, alongside his many accolades which include the Order of St Michael and St George (CMG) and the Order of the Medjidie (4th Class).

At the time of his death at Streatham Hall hospital, Exeter, on 23 March 1920, George was serving as a Major in the Royal Army Medical Corps (RAMC). He was buried in Exeter Higher Cemetery on 27 March 1920, where his grave, like many of the First World War graves here, is marked with a stone plaque that simply bears his initial ‘G’ and surname ‘Stoker’. 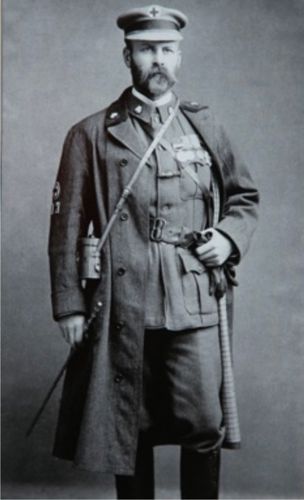 During the Second World War, Exeter, like many major towns and cities throughout Britain, was targeted by the German Luftwaffe during a period of extensive bombing raids between September 1940 and May 1941 known as “the Blitz”.

In Exeter, the first bombing raid was on 7 August 1940, although the damage was relatively light. Further air raids followed with light casualties, then in 1942, in response to the Royal Air Force (RAF) bombing raid on the ancient German cathedral city of Lubeck, a series of reprisal raids were launched.

On 23 and 25 April 1942, Exeter was the first city to be hit and was targeted again in a devastating air raid on 4 May 1942. As a result of 19 air raids on Exeter, 265 people were killed and 687 injured, 111 of which were seriously wounded. A significant portion of Exeter’s city centre was destroyed, especially through the outbreak of fires caused by incendiary bombs, which demolished St James’s chapel in the Cathedral, and led to the loss of one million books and documents held at the City’s Library. By the Long Valley Path in Higher Cemetery, there are now three rows of graves of civilian victims of the Exeter Blitz. 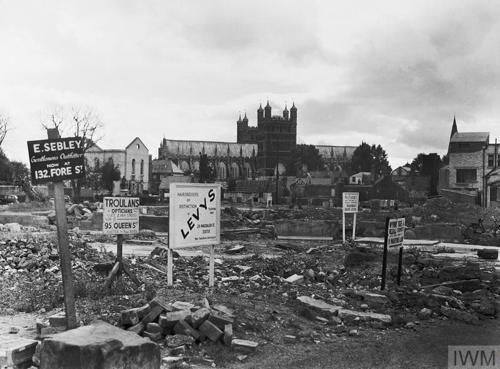 Signboards advertising new locations of shops that once stood on Exeter High Street before their demolition following the Blitz on the city in April and May 1942. © IWM D 16649

There are also 12 war graves resulting from the raid on 4 May 1942, located in the cemetery, including 7 German Luftwaffe airmen shot down during the raid and three members of the Home Guard, Lance Corporal Hermon Dimond and Privates Frederick Draper and Edwin Hubbard. All three were members of the Devon Home Guard and were killed whilst on duty.

The cemetery is also the resting place of 88 members of the air forces killed whilst on active service during the war, through operations, training or accidents around the United Kingdom. There are many different nationalities among these, including Australians, Canadians, Polish and New Zealanders.

This cemetery managed by Exeter City Council and before visiting we recommend you consult their website for up to date information.