Throughout both world Wars, Plymouth was a major Royal Navy base of operations. Thousands of Royal Navy personnel were based in the town and Efford Cemetery was used throughout both wars as a burial place for servicemen and women. Today you can find over 450 at rest here.

The cemetery at Efford was opened in 1907 to accommodate the growing town of Plymouth. There are 447 Commonwealth war graves in the war cemetery. 338 date from the First World War, while a further 109 are those of Second World War servicemen and women. Some of the earliest war graves here, dating from September 1914, are those of the 3rd Battalion, Sherwood Foresters (Notts and Derby Regiment) who were stationed in Plymouth shortly after the outbreak of war. There are also twelve war graves of non-Commonwealth nationalities, including 10 Greek seamen who died in 1916.

During the First World War, the amalgamated ‘Three Towns’ of Plymouth, Devonport and East Stonehouse housed the Royal Dockyard, the Royal Naval Barracks (known as HMS Vivid) and the Royal Marine Barracks of the Plymouth Division. During the First World War there were several naval and military hospitals in the area, including the 4th Southern General Hospital which had beds for more than 1,200 patients. Some of the men buried in this cemetery died in one of the hospitals in the area, including men from the forces of Australia, Canada, India and New Zealand, alongside also eight men who served in the Chinese Labour Corps, a British unit formed of labourers recruited from China. 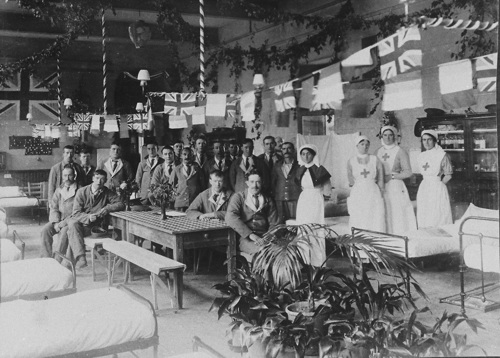 One of the New Zealanders commemorated here is 31-year-old Private William Simon Gillanders, of the New Zealand Reinforcements. William, along with nine other New Zealanders, was killed after alighting from a troop train at Bere Ferrers station on the wrong side, having assumed they should leave by the same side they had entered. The men were struck and killed by an oncoming express. William and his comrades were buried in Efford Cemetery. William’s grave is marked not by a CWGC headstone, but by a private memorial which his family were able to arrange to be installed all the way from New Zealand.

A crematorium for Plymouth opened within the cemetery in 1934, and the Commission commemorates 61 service men and women of the Second World War who were cremated here on a screen wall close by the Cross of Sacrifice.

During the Second World War, Plymouth made a major contribution to the war at sea with ships from here taking part in the Battle of the Atlantic and the D-Day landings. The workforce at the dockyards swelled to over 18,000 and, for the first time, women were employed as engineers in Devonport. As a naval station second only to Portsmouth, Plymouth was frequently attacked by bombers of the German air force. The dockyards at HMNB Devonport were the main target but the city also suffered devastating damage during the ‘Plymouth Blitz’ of March and April 1941. Hundreds of civilians were killed, and thousands made homeless.

The CWGC commemorates 1,119 civilians of Plymouth who were killed during the war on the Civilian Roll of Honour. The worst night of the Plymouth Blitz occurred on 22-23 April 1941, and saw a large communal shelter on Portland Square, which was packed with residents of the houses in the area, receive a direct hit. Over 70 people were killed, including Sergeant William Surgeoner of the Royal Marines, his wife Lavinia and daughter Eileen. So great was the loss of life during the Plymouth Blitz that many of those killed were buried in a mass grave in Efford cemetery. The names of the civilians killed are recorded on the Plymouth Blitz war memorial, located within the cemetery, while a special memorial records the names of Commonwealth servicemen who were killed. 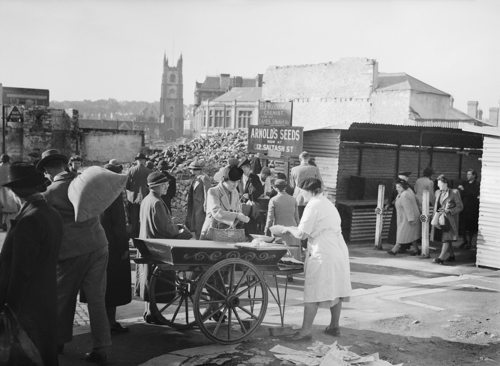 Shopping in wartime Plymouth, 1943. Men and women shop at a stall and in corrugated iron sheds which have been erected in place of shops that were destroyed during an air raid. © IWM D 16663