49 servicemen were laid to rest here during the First World War but when the Second World War began space was set aside for service burials, and today you will find a large plot where 80 Commonwealth and 400 Polish servicemen are buried.

Newark Cemetery was constructed in 1856 both as a final resting place for the dead and as a park for the people of the town. The CWGC cares for the graves of 49 servicemen of the First World War scattered throughout the war cemetery. When the Second World War broke out, several RAF air bases were established in the area. Polish aircrews operated from a number of these bases and their dead were laid to rest here. The cemetery is a special place for Polish remembrance.

The Polish Air Force was active in the United Kingdom from the summer of 1940 and flew with and alongside the Royal Air Force during the Battle of Britain. Having already fought the Luftwaffe in defence of their own country in 1939, and in defence of France in early 1940, Polish pilots were experienced, tactically astute and had a reputation for bravery. Some joined existing RAF squadrons, while others flew in new squadrons such as No. 303 “Warsaw Kościuszko” Squadron, which was one of the most effective of all fighter units during the battle. By early 1941 the Polish Air Force had expanded to nine fighter and four bomber squadrons, along with support services, and in September 1944 Polish airborne troops of the 1st Independent Parachute Brigade participated in Operation Market Garden at Arnhem. 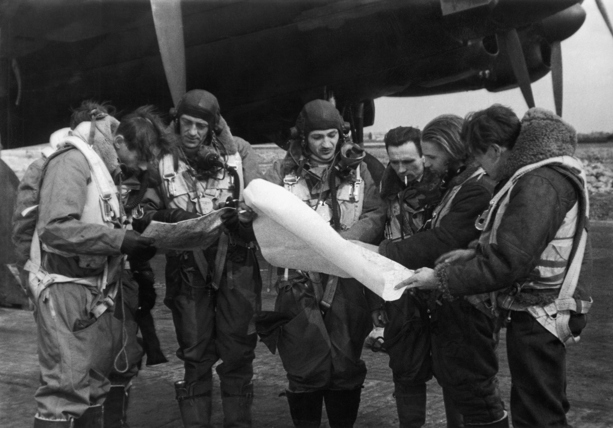 A Polish aircrew examine their map before embarking on a mission from Newark during the Second World War. IWM HU 128892

Polish Air Force bomber squadrons operated from several airfields across Nottinghamshire and Lincolnshire, including Syerston, Swinderby, and the large grass airfield at Newton, which was used mainly for flight training. The majority of Polish servicemen who are buried in this cemetery died in accidents which took place during training or while returning from operations over occupied Europe. Airmen and ground crew who were injured or suffering from disease were treated at RAF Nocton Hall, near Lincoln, and many of those who did not survive were brought to Newark for burial.

A memorial cross honouring fallen Polish airmen was erected in 1941 and unveiled by Władysław Raczkiewicz, President of the Polish government-in-exile from 1939-1947, and General Władysław Sikorski, wartime Prime Minister and Commander-in-Chief of Polish Forces. Both men were later buried here: General Sikorski in 1943, and in 1947 President Raczkiewicz. Although General Sikorski’s remains were returned to Poland with full military honours in September 1993, this is still the final resting place of President Raczkiewicz. Ceremonies continue to be held here honouring the Polish war effort, including an All Souls ceremony held every year on the last Sunday in October to commemorate those members of the Polish Air Force who died during the Second World War. A memorial just outside our plot remembers the ‘Air Bridge’ which tried to support the 1944 Warsaw Uprising from the air; an annual ceremony here remembers the 250 airmen who lost their lives in this operation. 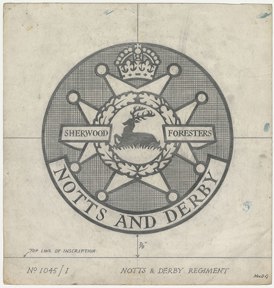 Newark-upon-Trent Cemetery contains 49 war graves from the First World War, well over half for individuals serving with either the Royal Engineers or the Sherwood Foresters (Notts and Derby Regiment), both of which had depots and other related administrative headquarters in the town. 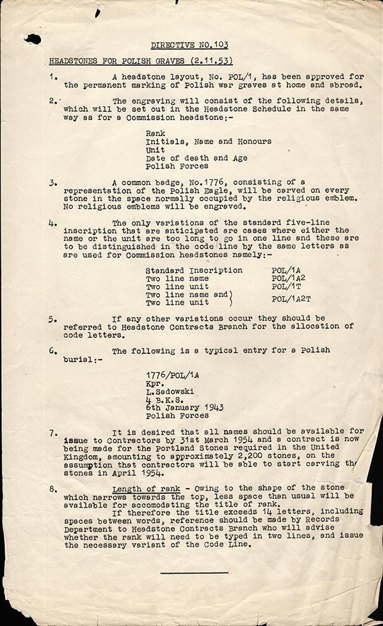 One of the youngest casualties commemorated by the CWGC in the cemetery is Private Levi Sibcy, 2nd/8th Battalion, Sherwood Foresters (Notts and Derby Regiment), who was just 16 years old when he died of pneumonia in January 1915.

Many of the headstones to First World War casualties are scattered throughout the cemetery in small groups or isolated graves, but as the total number of war graves exceeded 40, a Cross of Sacrifice was erected in the cemetery grounds, and was unveiled on 17th May 1928 by the Mayor of Newark. 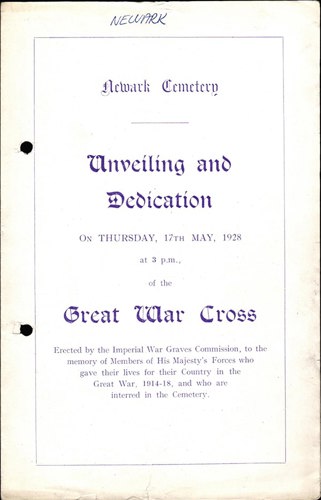 With the outbreak of the Second World War, plans were put in place around the United Kingdom for the creation of reserved plots in local and municipal cemeteries for the sole use of the military authorities.

In Newark, with Polish Air Force bomber squadrons operating from several airfields across Nottinghamshire and Lincolnshire, this resulted in the creation of a Polish section within the cemetery, which gradually expanded to include nearly 400 graves of Polish servicemen. 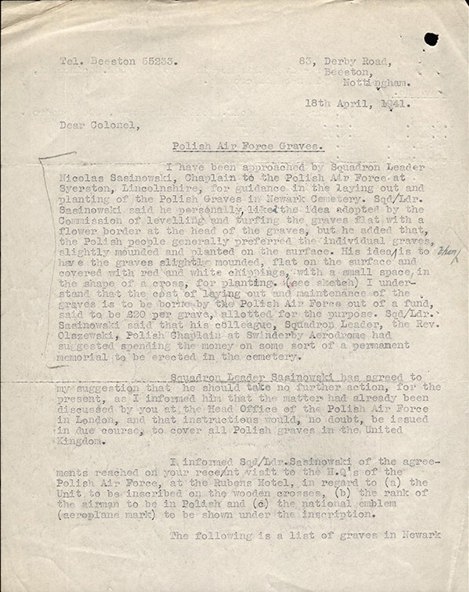 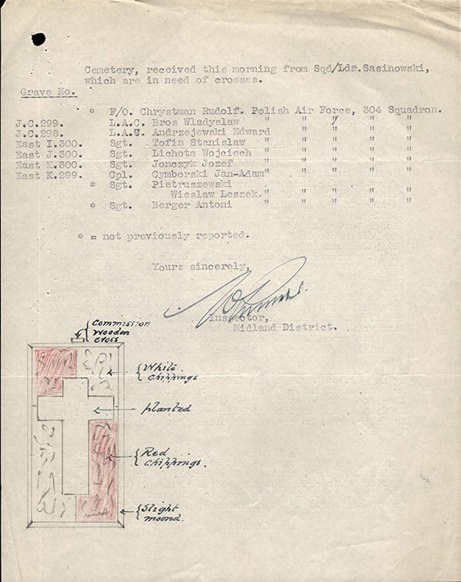 The Polish military authorities naturally took a great interest in how these graves were maintained, and senior figures from the Polish Air Force made a number of visits to the cemetery to discuss maintenance with the cemetery superintendent, Mr Wiggins. One suggestion made by Squadron Leader Nicolas Sasinowski, Chaplain to the Polish Air Force, was to cover the graves in red and white chippings, leaving a small space in the shape of a cross bare for planting, although this idea was tactfully declined by the Commission. The Commission did however agree to the request to plant red and white flowers around the graves, and the Polish authorities also arranged for the erection of a stone memorial cross in the plot. 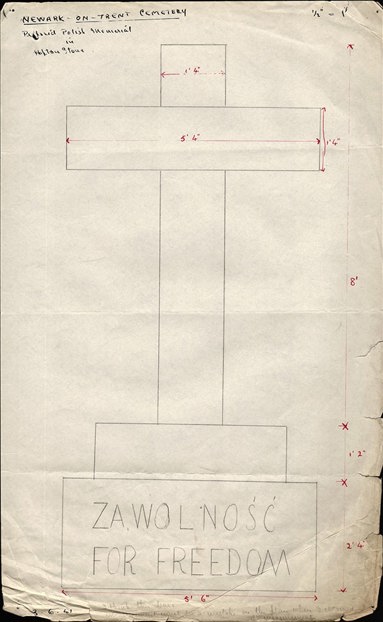 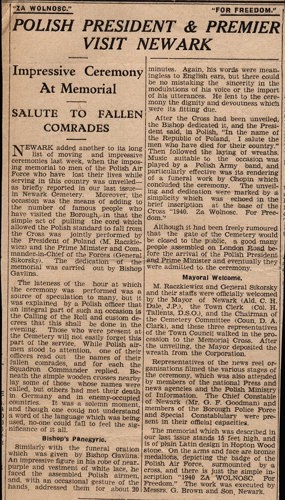 Little did both men know that less than 6 years later they too would lie buried in the same plot, in the shadow of the memorial they had unveiled. 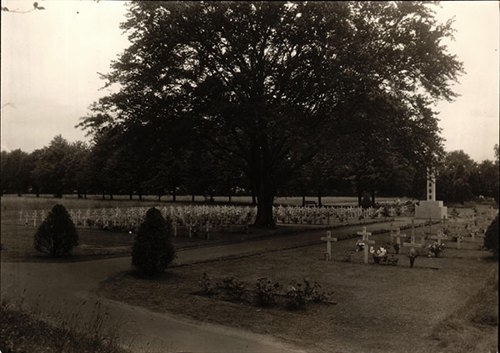 General Wladyslaw Sikorski was killed in a flying accident on the 4th July 1943.

He was returning to London from an inspection of Polish forces deployed in the Middle East, and died along with all the other passengers (which included his daughter Zofia Leśniowska) and 5 of the 6 crew, when their aircraft crashed into the sea 16 seconds after take-off from Gibraltar airport. 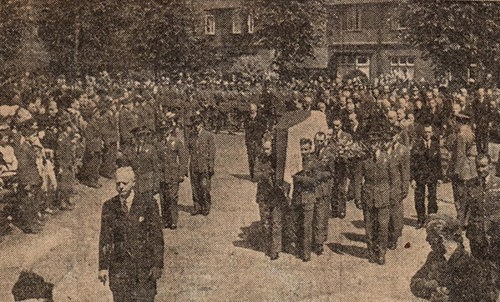 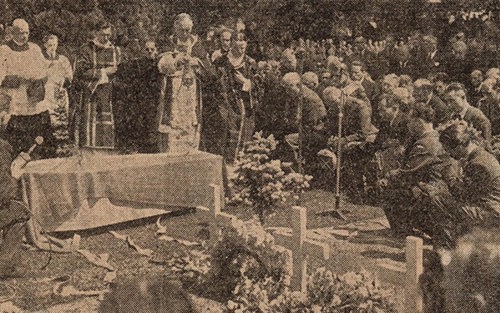 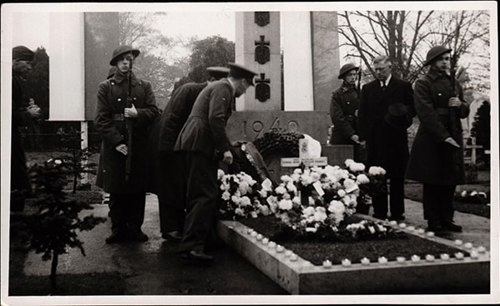 His body was recovered and brought in a Polish destroyer from Gibraltar to Plymouth, where it was transported by train to Paddington, and then on to the Polish Government in Exile Headquarters in Kensington Palace Gardens where it lay in state. His coffin was then taken to Westminster Abbey for a special funeral service, before being taken on to Newark for burial. 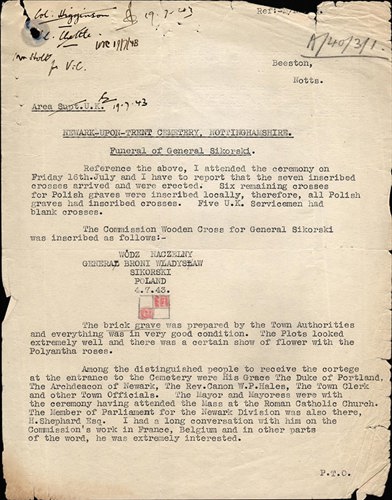 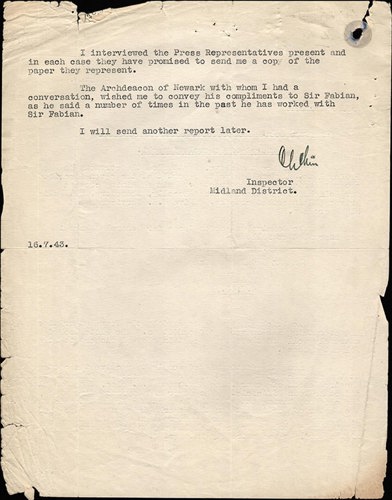 The remains of three other members of Sikorski’s staff were also recovered from the crash and buried in Newark on the 28th July 1943: Brigadier General Tadeusz Klimecki, Colonel Andrzej Marecki, and Lieutenant Józef Ponikiewski. 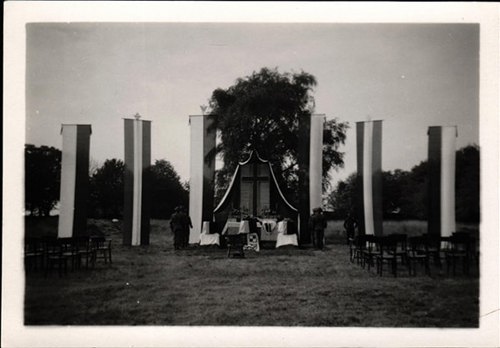 However, Newark was not to be the final resting place for any of these men, and all have now been repatriated to Poland, General Sikorski in 1993, and his staff in 2010, although Sikorski’s original grave location in Newark is still marked with a commemorative headstone.

Over the years, General Sikorski’s grave, and that of President Wladyslaw Raczkiewicz, who does remain buried in Newark, and the Polish plot as a whole, have become a site of pilgrimage and commemoration for Britain’s Polish community. Annual remembrance ceremonies are still held, and these have often included the placing of lighted candles on the war graves in the service plot as part of the ceremony. 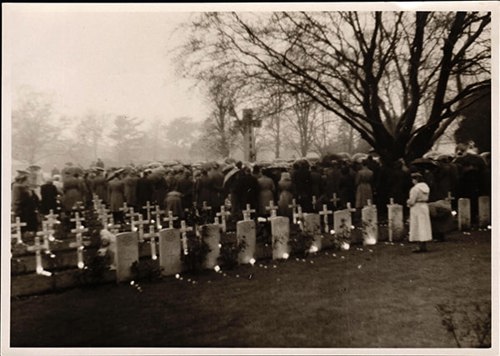 While the majority of Polish casualties buried in the cemetery served with the Air Force, there are also 46 members of the Polish Army buried here. 25 of these men, members of the 1st (Polish) Independent Parachute Brigade, died in one catastrophic accident on the 8th July 1944. While undertaking parachute training, the two planes carrying them collided in mid-air above the village of Tinwell, Stamford, and crashed to the ground, killing all but one of the American and Polish occupants. 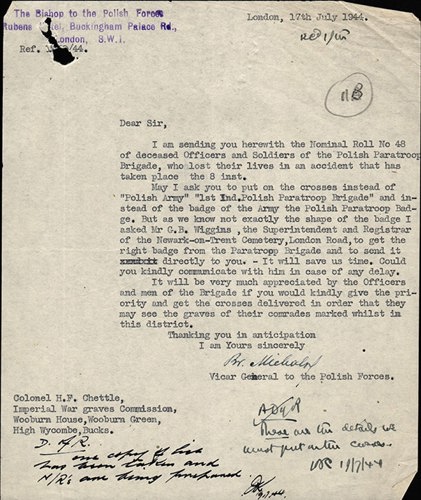 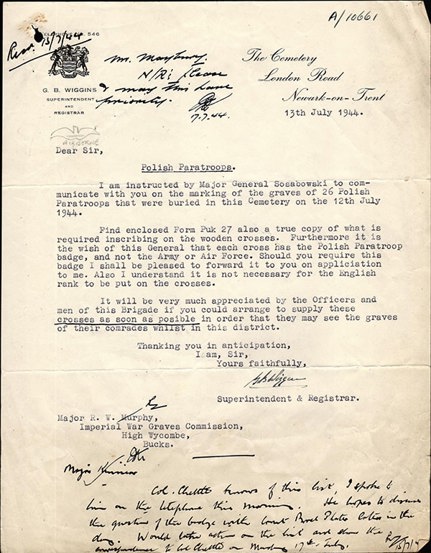 In a letter from the Cemetery Superintendent Mr Wiggins to the IWGC, he passed on the request of Major Stanisław Sosabowski, commander of the Polish Parachute Brigade, who would go one to lead his men at the Battle of Arnhem, that the graves of his soldiers be marked as quickly as possible. This was to ensure that their comrades could see them before their war duties took them away from the area. The Commission duly arranged for the temporary wooden crosses to be despatched to the cemetery as quickly as possible.

Later, in recognition of the work Mr Wiggins had done over the years to maintain the Polish graves in the cemetery, he was awarded the Silver Cross of Merit by the Polish Authorities. 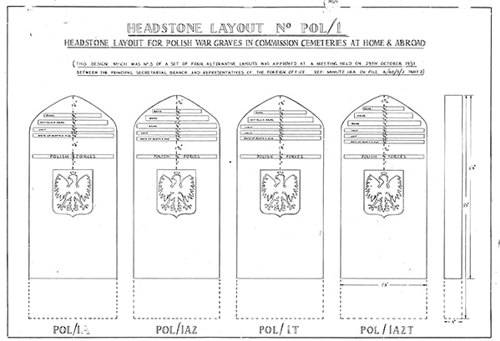 In order to distinguish the Polish casualties as belonging to a separate, allied force rather than being part of H.M. Forces, a different design was required for their headstones. 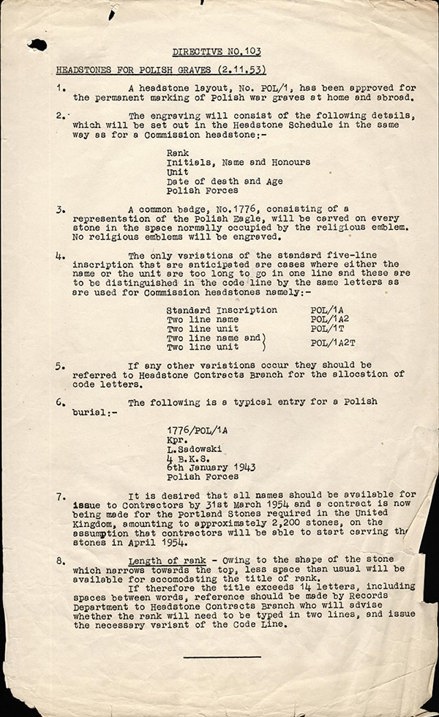 Through discussions with the Foreign Office, and by proxy with the Polish authorities, the IWGC came up with a new headstone shape, which was agreed by all parties in October 1951.

The design, which had a tapered top, would be used to mark the graves of all members of the Polish Forces who were buried both in the UK and abroad, and would feature the coat of arms of Poland. 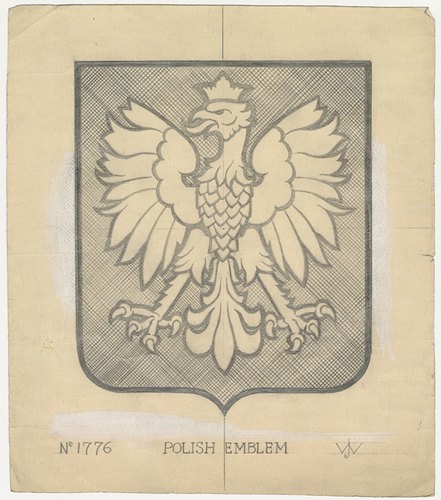 By car the cemetery is located off London Road and there is parking on site. The Polish war graves plot can be found at the far end of the cemetery.