Situated on the western edge of the village of Scampton below RAF Scampton, the home of the Red Arrows, Scampton (St. John) Churchyard contains 64 Commonwealth graves and nine German graves of the Second World War. The war graves are located in two sections linked by a footpath north of the church.

Situated on the western edge of the village of Scampton, 10 kilometres north of Lincoln, Scampton (St. John) Churchyard contains 64 Commonwealth burials and nine German graves of the Second World War. During the war, there was a Royal Air Force (RAF) Station at Scampton, and in the early months of the war a plot lying to the right of the entrance was set aside for the burial of servicemen. In 1941 it became necessary to reserve further ground for this purpose and a plot in an extension of the churchyard north of the church was used. The war burials include airmen from Canada, Australia and New Zealand and are divided into two sections which are linked by a footpath. A war memorial chapel housed inside the church is dedicated to the RAF and is furnished with the original squadron shields, and honour boards from the officers’ mess at RAF Scampton.

The churchyard also contains a number of Ministry of Defence (MoD) graves which can be distinguished from the CWGC graves from the slightly arched top of the headstone design. The Cross of Sacrifice, as designed by Sir Reginald Blomfield, stands next to the service plot. The Cross of Sacrifice was unveiled in July 1950 by Air Marshal Sir Hugh Walmsley KCIE CB CBE MC DFC and dedicated by the Lord Bishop of Lincoln. Around 100 people attended the unveiling ceremony including twelve relatives of servicemen buried in the churchyard.

During the Second World War, the RAF base at Scampton was home to No. 5 Group RAF in Bomber Command. It was from RAF Scampton that the first offensive raid of the Second World War by the RAF was launched when six Hampden bombers of 83 Squadron accompanied by three Hampdens of 49 Squadron took off on 3 September 1939. Leading them was then Flying Officer Guy Gibson, later the first Commanding Officer of the now famous 617 ‘Dambusters’ Squadron and one of three recipients of the Victoria Cross who were stationed at RAF Scampton during the war. 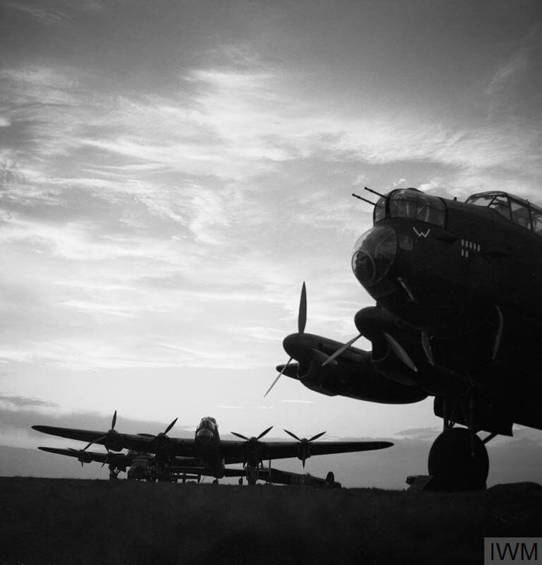 Avro Lancasters of No. 57 Squadron lined up at dusk before an operation, Scampton in Lincolnshire, February 1943. © IWM CH 8785

Following the development of the Upkeep bouncing bomb by British engineer Barnes Wallace, 617 Squadron formed at Scampton and was selected to carry out the raid on the night of 16-17 May 1943 which has become more famously known as “The Dambusters Raid”. Codenamed Operation Chastise, the plan was to attack the Sorpe, Eder and Möhne dams in the Ruhr area of Germany with an additional aircraft tasked to perform an attack on the Schwelm Dam. A total of 19 Lancaster bombers took off from Scampton led by Wing Commander Guy Gibson. Although the Eder and Möhne dams were breached during the raid, eight of the Lancasters failed to return and 53 aircrew personnel were lost. Gibson was awarded the Victoria Cross for his role in the raid. He was later killed on 19 September 1944 when his aircraft crashed at Steenbergen in the Netherlands. Aged only 26 at the time of his death Gibson had completed over 170 combat operations. He is buried at Steenbergen-en-Kruisland Roman Catholic Cemetery in the Netherlands. 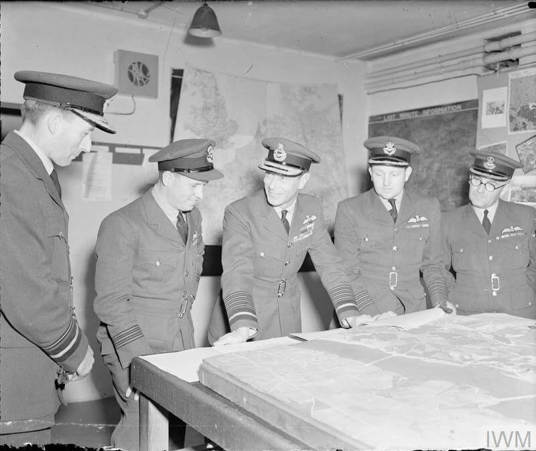 The airmen who are buried in Scampton (St. John) Churchyard died whilst on active service either in training accidents or in operations around the United Kingdom. Among these is Wing Commander William Waters Stainthorpe who was awarded the Air Force Cross (AFC). William was killed on 26 February 1941 when the Hampden bomber he was piloting crashed into high ground near Derrington Cross, Staffordshire.

Another distinguished serviceman buried here is Flight Lieutenant Anthony John George Mills of 83 Squadron who was awarded the Distinguished Flying Cross (DFC). Anthony was killed on 25 August 1941 when the Hampden bomber he was in collided with a 49 Squadron Hampden bomber near Whale Jaws Farm, Hackthorn, Lincolnshire.

Almost all of the Commonwealth war graves here are of airmen except Private Tom Horberry, who was a member of the King’s Own Yorkshire Light Infantry regiment and is buried in Grave 9. Private Horberry was on guard duty at the airfield at Scampton on 28 September 1940, when a damaged Allied aircraft returning from a raid crashed into his sentry hut, killing him. He was 36 years old.

The nine German burials here are of Luftwaffe airmen who were killed in air raids on airfields in eastern England, including RAF Scampton. After the end of the Second World War, almost all of the German war dead were reinterred into the large German war cemetery at Cannock Chase, Staffordshire, however the relatives of the German war dead at Scampton refused permission after seeing that the graves were treated with the same respect and care as the Commonwealth graves at Scampton.

The village of Scampton is 10 kilometres north of Lincoln, and its church and churchyard are on the B1398. Before visiting we recommend you consult the website of Scampton Church.