Kettering (London Road) Cemetery contains 51 Commonwealth burials of the First World War and a further 40 of the Second World War. A screen wall near the Cross of Sacrifice in the cemetery commemorates members of the Commonwealth forces who died in active service and were cremated at Kettering Crematorium.

Located in the market and industrial town of Kettering in Northamptonshire, Kettering (London Road) Cemetery contains 51 Commonwealth burials of the First World War and a further 40 burials of the Second World War. A small number of graves from both wars are grouped together whilst the remainder are scattered throughout the cemetery. The majority of the casualties buried or commemorated at the war cemetery were servicemen who served with the United Kingdom, except one member of the Royal Canadian Infantry Corps. The Cross of Sacrifice, as designed by Sir Reginald Blomfield, stands near the centre of the cemetery on a circular island facing towards the cemetery entrance. A small screen wall made from Portland stone stands in front of the Cross of Sacrifice and commemorates 11 members of the Commonwealth forces who died in active service during the Second World War and whose remains were subsequently cremated at Kettering Crematorium.

In total, there are 51 graves from the First World War here, many of whom have a local connection to Kettering through the next of kin’s address recorded by the Commission or their service with local regiments, such as the Northamptonshire Regiment. There are 16 members of the Northamptonshire Regiment who died during the First World War buried in the cemetery. 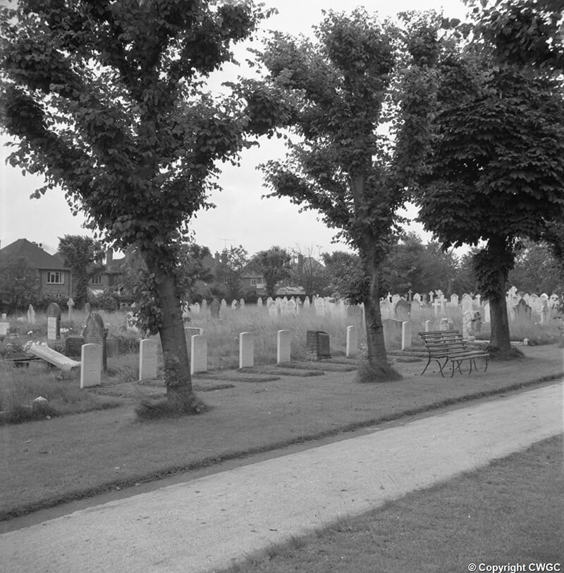 A number of the war graves maintained by the Commission here, as in many cemeteries and churchyards throughout the United Kingdom, are marked with private memorials, sometimes recording the names and details of several members of the same family killed during the war. Two brothers of the Chapman family are buried in the same grave here: Lance Corporal Charles Reuben Chapman MM of 3rd Battalion, Northamptonshire Regiment and Private Alfred Richard Chapman of 3rd Battalion, Bedfordshire Regiment both died after the Armistice and are buried in the same grave here. The private memorial notes that Charles died from gas poisoning on 30 November 1918 whilst Alfred ‘died serving his King and country’ on 9 August 1919. The headstone also mentions their two brothers who are commemorated by the Commission abroad; Private Percy Edwin Chapman of 1st Battalion, Northamptonshire Regiment, who died on 16 November 1916 and is buried in St. Sever Cemetery Extension, Rouen, France, and Private Francis Edward Chapman, also of 1st Battalion, Northamptonshire Regiment, who was killed in action on 9 May 1915 and is commemorated on the Le Touret Memorial, France.

During the Second World War, the Royal Air Force operated a station at RAF Grafton Underwood which was located 4 miles north-east of Kettering. Between 1942 and 1945, Kettering experienced a large influx of American servicemen, particularly from the US 8th Air Force who operated from RAF Grafton Underwood. The airfield was nicknamed “Grafton Undermud” due to the perceived English weather of constant rainfall. Aircraft operating from RAF Grafton Underwood included a bombing raid on Rouen led by Major Paul W. Tibbets who in 1945 piloted the Enola Gay, the B-52 Superfortress bomber which is famous for being the aircraft that dropped the atomic bomb on Hiroshima on 6 August 1945. 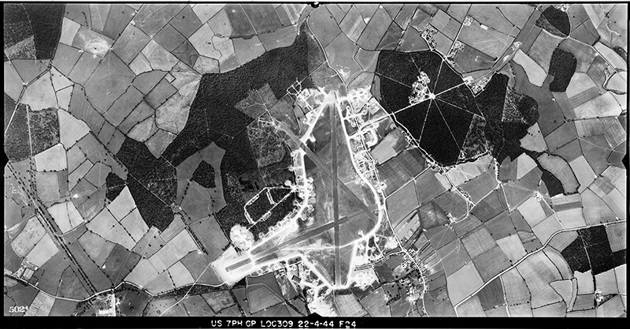 Aerial photograph of Grafton Underwood airfield. The bomb dump is to the north of the perimeter track on the west side of the airfield. 22 April 1944. Photograph taken by 7th Photographic Reconnaissance Group, sortie number US/7PH/GP/LOC309. English Heritage (USAAF Photography). Source: http://www.americanairmuseum.com/media/5895

Many local businesses in Kettering, such as Blanchflower & Son and A.E. Smith & Son, were used to manufacture aircraft parts after the main centre at Sywell airfield was found to be inadequate. Parts manufactured at these premises included outer wing parts and tail flaps for Wellington bomber aircraft.

Elements of the 4th (Kettering Borough) Battalion Home Guard were stationed on London Road during the war, where D Company was based at the brickyard and the battalion HQ was located at 75 London Road for a short period from April 1941.

Among the Second World War graves here in the cemetery is a George Cross recipient Pilot Officer Raymond Mayhew Lewin of 109 Squadron, Royal Air Force Volunteer Reserve. Raymond was born in Kettering to Alfred George and Clara Frances Lewin on 14 January 1915. He was educated at Kimbolton School and joined the RAF’s Volunteer Reserve in the spring of 1936. On 3 November 1940, during a mission at Tal Handaq, Malta, Raymond carried out the actions for which he was awarded the George Cross when he rescued his co-pilot from their burning aircraft. The citation published in the London Gazette on 7 March 1941 describes Raymond’s courage:

In November, 1940, Sergeant Lewin was the captain of an aircraft on a night bombing mission. Shortly after the take off the aircraft began to sink and crashed into a hillside where it burst into flames. Sergeant Lewin extricated himself and saw three of his crew of four climbing out of the escape hatch. He ordered them to run clear. He then ran round the blazing wing in which full petrol tanks were burning and crawled under it to rescue his injured second pilot. Despite his own injuries - a cracked kneecap and severe contusions on the face and legs - he dragged and carried the pilot some 40 yards from the aircraft to a hole in the ground, where he lay on him just as the bombs exploded. This superbly gallant deed was performed in the dark under most difficult conditions and in the certain knowledge that the bombs and petrol tanks would explode.

Following a brief period of recuperation from the injuries sustained during his heroic actions in Malta, Raymond returned to the United Kingdom where he was posted to 109 Squadron. Sadly, on 21 November 1941, the Wellington Bomber he was aboard crashed on landing at Oakington, Cambridgeshire, killing all of the crew aboard, including Raymond. He was buried with full military honours in his hometown of Kettering. The personal inscription on his headstone chosen by his parents reads: WE LEAVE HIM IN GOD'S KEEPING THE ROUGH ROAD SAFELY PASSED

Access to Kettering (London Road) Cemetery is off the London Road. Before vising we recommend you consult the website of the cemetery.