The Lincolnshire Church with a Strong Second World War Connection

Lincolnshire had a strong link with the Royal Air Force during the Second World War which continues to this day. This week Megan Kelleher, Public Engagement Coordinator for East Central, uncovers the connection between a church in the village of Scampton and the service personnel who fought to defend the skies over Britain between 1939 and 1945. 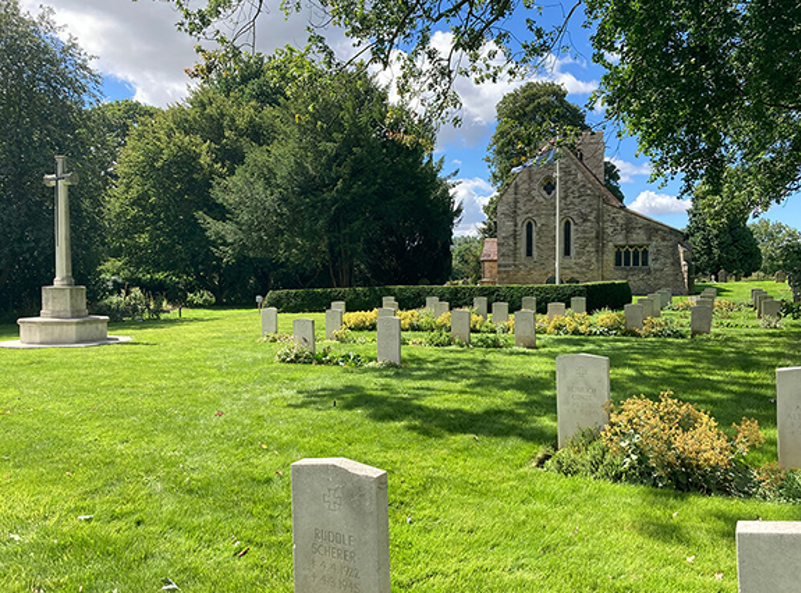 When our Operations Team in the East of England are working in sites across Lincolnshire, they often see practise displays from the Royal Air Force Aerobatic Team, the Red Arrows. Currently based at RAF Scampton, they can be seen in the skies over Lincoln practising for upcoming shows around the world. We have many sites in Lincolnshire, but one of the closest to RAF Scampton itself is Scampton (St John the Baptist) Churchyard. Many will drive past this beautiful churchyard as they pass through the idyllic village of Scampton looking for the sites associated with the crews of 617 Squadron known for Operation Chastise (“the Dambusters”). 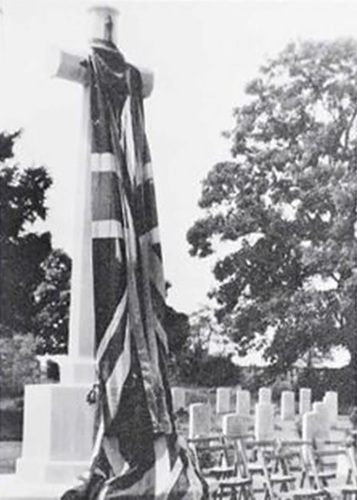 Photo: The Cross of Sacrifice unveiled in July 1950 by Air Marshal Sir Hugh Walmsley and dedicated by the Lord Bishop of Lincoln. The flagpole nearby often flies the RAF ensign.

Near the airfield at RAF Scampton, on the western edge of the village, St John the Baptist Churchyard contains the graves of 64 Commonwealth servicemen and nine German airmen of the Second World War. In the early months of the conflict, an area lying to the right of the entrance was set aside for the burial of servicemen. By 1941 more space was necessary. Today, there are two main plots: the original plot to the right of the entrance, and another in an extension of the churchyard that is north of the church itself. They are linked by a footpath and both can be seen from the road that passes through the village. The churchyard also contains several Ministry of Defence graves, which can be distinguished from the CWGC graves by the shape of the headstone, reminding visitors that the RAF had a presence here from the First World War until today, not just during the Second World War.

The Second World War personnel remembered here served with the air forces of Australia, Canada, New Zealand and the United Kingdom. They died whilst on active service either in training accidents or on operations. Many had a connection to RAF Scampton. 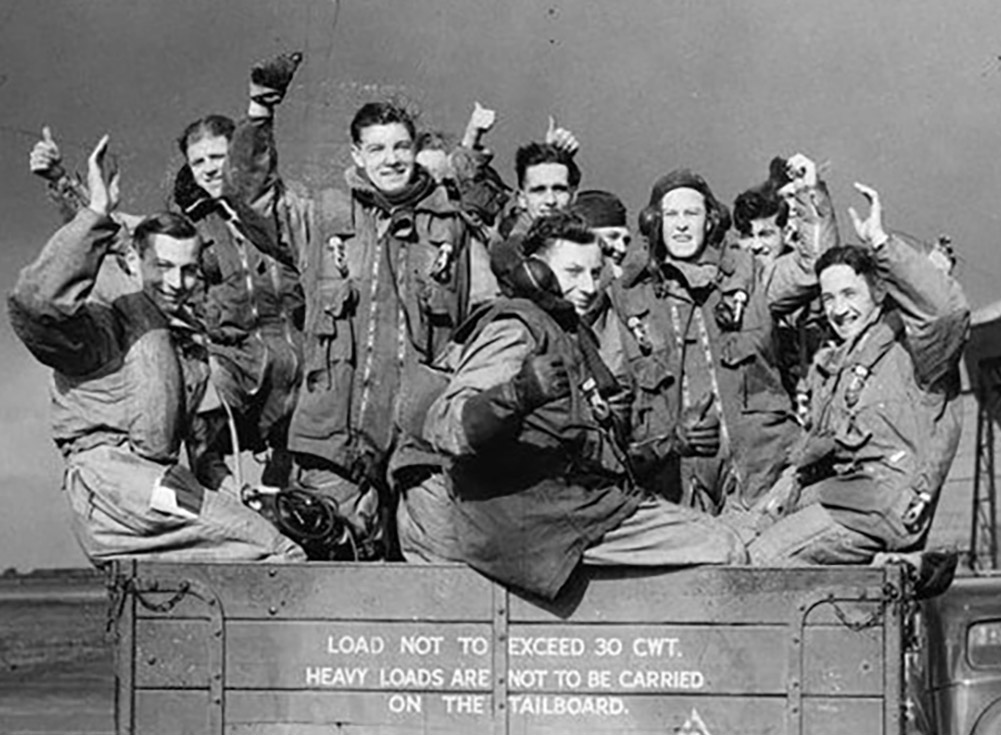 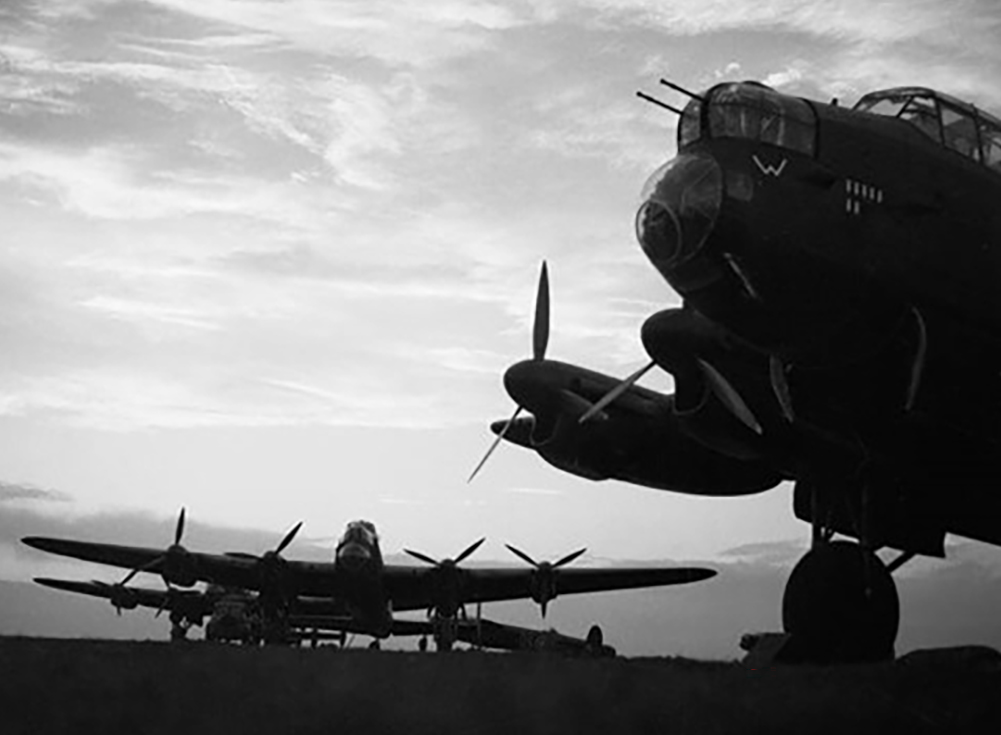 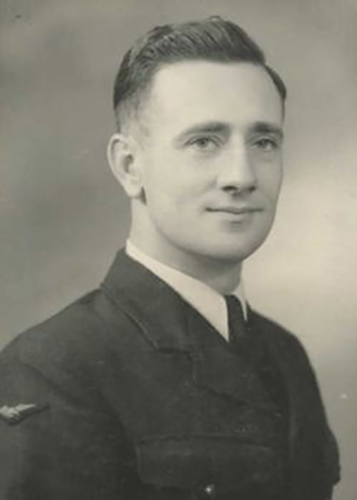 Photo: Sergeant Roy George Peverill of the Royal Australian Air Force was one of the crew killed in the incident on 30 May 1942. He was 27 years old.

A number of crew groups can be found here. One bomber crew of 150 Squadron were returning from a mission to Cologne on 30 May 1942 when their aircraft crashed and burst into flames near Faldingworth, Lincolnshire. Three men of the Royal Australian Air Force and three of the Royal Air Force were killed. The three Australians were buried in St John the Baptist Churchyard.

All of the Commonwealth casualties laid to rest in this churchyard were airmen, with the exception of Private Tom Horberry. Horberry was a member of the King’s Own Yorkshire Light Infantry. He was on guard duty at RAF Scampton when a damaged aircraft returning from a raid crashed into his sentry hut, killing him. He was 36 years old.

There are nine German airmen buried at the site. They were killed while raiding targets across eastern England, including RAF Scampton. In the 1960s many German war graves in the UK were moved to the large German war cemetery at Cannock Chase in Staffordshire. It is said that the relatives of the Germans buried at Scampton wished their loved ones to remain in this churchyard after seeing that the graves were treated with the same respect and care as the Commonwealth war graves.

Among the German casualties buried here is a four-man bomber crew shot down by anti-aircraft fire in May 1941, crashing at Brattleby Lane, near Scampton. Five bodies were found and buried, however, and local legend held that the girlfriend of a crew member had stowed away on board to experience a mission. In the 1960s, a Scampton farmer found a German identity tag while ploughing. Searches of the German archives were carried out, and a fifth person was confirmed as a member of the bomber’s ground crew, Gefreiter E H Riedel, onboard unofficially for the raid. 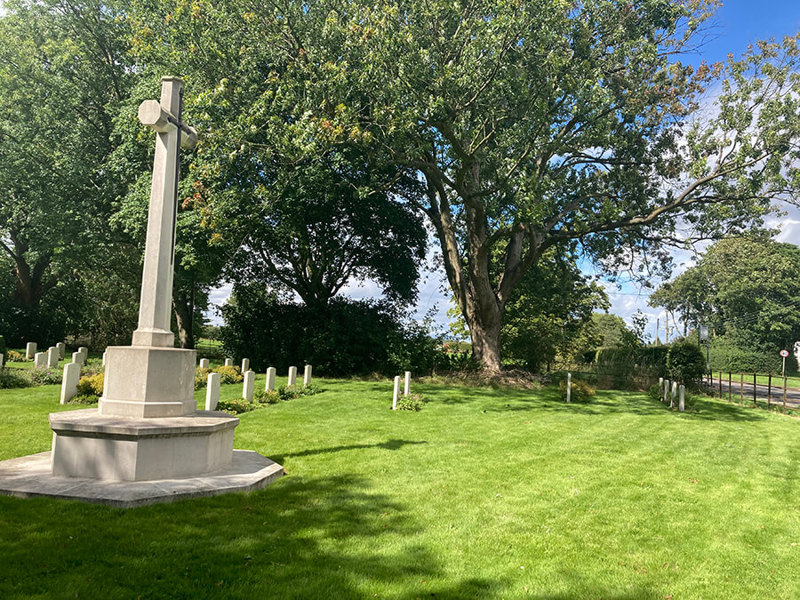 For more information about the casualties remembered at the site, please get in touch to arrange a socially-distanced tour of the site. 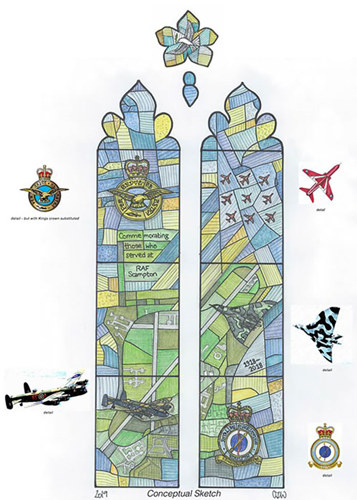 The church is currently undergoing major renovation works, including a campaign to crowdfund a stained-glass window to mark the relationship with RAF Scampton. They have over £23,000 in donations to fund the creation of the window. Through community partnership with a range of organisations, including the CWGC, the church is hoping to create an internal space where the community can meet, socialise, and explore their own local history.

Enter your postcode into our new search tool to discover the people in your area who died in the First and Second World Wars.