Want to learn more about the World War history of the East of England? Megan Kelleher, Public Engagement Coordinator (East Central), is on hand as she takes us through some of the sites you can discover virtually that contain Commonwealth Air Force casualties in the region. 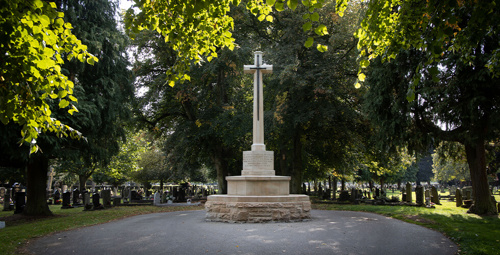 Many will have visited the American Cemetery at Madingley, but did you know that the CWGC cares for casualties in Cambridge in Cambridge City Cemetery. The site was used during the First World War to bury service personnel who died of their wounds or illness in the 1st Eastern General Hospital. During the Second World War a regional burial plot for use by the Royal Air Force was established. It is now the final resting place of over 1,000 servicemen and women.

One of the youngest Royal Air Force casualties of the Battle of Britain and the Second World War is buried here. Aircraftman First Class Harry William Clack was just 16 years old when he was killed while trying to recover a crashed German reconnaissance aircraft on his second day on the job.

Many may be familiar with RAF Cottesmore, opened in 1938, as the home to the Tornado V Force (Victors and Vulcans) and Harrier aircrafts. Space in the churchyard extension was put aside for burials from this new facility. The Rector of the Parish during the Second World War, Reverend Edward Guilford, had served as an army chaplain during the First World War and felt that the men who passed through RAF Cottesmore were his parishioners. He frequently corresponded with the War Graves Commission, asking for plant recommendations to ensure the site was well-maintained.

Newark-Upon-Trent Cemetery also contains burials from both the First and Second World Wars. Forty-nine servicemen were laid to rest here during the First World War and their graves are scattered throughout the site. When the Second World War began, space was set aside for service burials which today number almost 500.

The majority of the burials in this plot are of Polish servicemen, many of whom served in the Polish Air Force. Polish bomber squadrons operated from several airfields across Nottinghamshire and Lincolnshire, and flight training largely took place on the grass airfield at RAF Newton.

Cadet Keith Rollason Couzin-Wood, part of the Air Training Corps, was on his first ever air experience flight in a Handley Page Hampden bomber when the aircraft stalled and crashed. Cadet Couzin-Wood was among four individuals killed in the incident; he was just 16 years old.

Royal Air Force College Cranwell is the home of Officer training for the Royal Air Force, and was the world’s first Air Academy, but did you know that there is a war graves plot nearby? A stone’s throw from the station is Cranwell (St Andrew) Churchyard, which has 74 casualties from the two World Wars in addition to a number of non-war service graves.

It should be noted that currently (as of August 2020) the north wall of the churchyard is in danger of collapse, and consequently the CWGC has decided to remove 18 headstones in the vicinity of the wall into safe storage until further notice. These graves, mostly in Plot 3, are being marked with temporary grave markers until the wall is fixed.

Many will have heard of RAF Scampton, thanks to its connection with both the ‘Dambusters’ and the Red Arrows. But you might not be as familiar with the burials at the local churchyard which contains 64 Commonwealth graves and nine German graves of the Second World War.

Burials here include several crews who were killed in training accidents or on operations. Inside the church there is a memorial chapel dedicated to the RAF and furnished with the original squadron shields and honour boards from the Officers’ Mess at RAF Scampton.

The nine German burials here are of Luftwaffe airmen who were killed flying air raids across England. At the end of the Second World War, the majority of German servicemen buried in the UK were reinterred into the large German War Cemetery at Cannock Chase in Staffordshire. However, relatives of the German war dead at Scampton refused permission for their reinternment after seeing that their graves were treated with the same respect and care as the Commonwealth graves at the site.

A stone’s throw from RAF Digby, Scopwick Church Burial Ground contains 55 Second World War graves, including five German servicemen. Among those buried here are Pilot Officer John Gillespie Magee Junior, who famously wrote the poem ‘High Flight’, and Pilot Officer John Sandes Barnwell. Pilot Officer Barnwell was one of three sons lost by engineer Frank Barnwell; he died in an accident while flying one of the aircraft designed by his late father, the Bristol Blenheim.