Just north of Aberdeen’s city centre lies Aberdeen (TrinIty) Cemetery & Broadhill Extension which contain the graves and memorials of over 270 Commonwealth servicemen and women of the two world wars.

The port city of Aberdeen played an important role in both world wars. The city was the home of the Gordon Highlanders infantry regiment, while servicemen of the Royal Navy Reserve based out of Aberdeen’s port swept the waters of the North Sea for enemy mines. Trinity Cemetery, which dates from the turn of the 19th-20th century, contains the graves and war memorials to over 170 First World War and over 100 Second World War service personnel, including two servicewomen.

Since before the First World War, the city of Aberdeen had been home to the Regimental depot of the Gordon Highlanders. This was housed in the former Castlehill Barracks, which stood near the junction of Castle Street and Commerce Street, around 800 metres south of Trinity cemetery. The regiment recruited principally from the city of Aberdeen and surrounding area and some 50,000 servicemen served with the regiment during the First World War. Gordon Highlanders suffered 29,000 casualties during the war of which 9,000 died. 43 of those are buried in Aberdeen (Trinity) Cemetery including 21-year-old Private Kenneth Cameron, of the 6th Battalion, who died of wounds on 29 April 1918. Like many of the Gordon Highlanders, Kenneth was a local boy, his parents John and Margaret Cameron lived at number 85 Urquhart Road, which is one road over south of the cemetery. 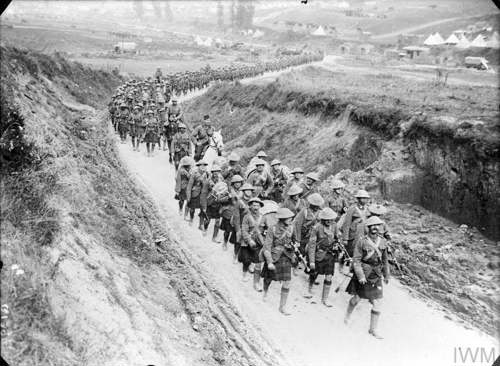 The 2nd Battalion, Gordon Highlanders on March, behind the lines during the Battle of the Somme 1916 - © IWM Q 1394

Another large group within the cemetery are the servicemen of the Royal Navy Reserve, many of whom were based out of the Aberdeen’s port and swept the waters of the North Sea for enemy mines.

The graves of the First World War servicemen are located in a number of different plots in the older part of Trinity cemetery including in Section N which was designated as “Common ground”. After the war the cemetery regulations prohibited the Commission from erecting headstones over the graves in the Common ground, so rather than marking only some of the graves, the decision was taken not to mark any, but instead to list the names on a Screen Wall within the cemetery.

There are, however 15 First World War servicemen buried in the cemeteries whose names are not listed on the Screen Wall but are instead named on a privately erected monument, known as Cooper’s memorial. In May 1916, Stoker 1st Class Thomas Nickless of HMS Acasta was killed at the Battle of Jutland and his body was brought back to Aberdeen for burial but went unclaimed and so he was buried in the “strangers” section of the cemetery.

Painting depicting the British Grand Fleet at Scapa Flow before setting off for the Battle of Jutland. - © IWM Q 20438

A local businessman Mr Cooper and his wife felt that those who had died in the service of their country deserved more and so purchased three adjoining lairs (plots) in a more prominent part of the cemetery for the burial of seaman who died during the war and who were not to be buried in privately owned graves. 15 servicemen were buried in these lairs, including the re-interred Stoker Nickless, and a large monument, also paid for by the Coopers, was erected over the graves, which bears their names and those of the fallen servicemen. After the war the Commission undertook to maintain the memorial as the servicemen’s official place of commemoration.

During the interwar period the cemetery was enlarged to the east, and the Broadhill Extension as it is known is where many of the Second World War servicemen are buried. Aberdeen’s port was again important to the war effort and came under attack from German bombers. On 16 May 1941 the troop transport HMT Archangel was bombed just off the coast, killing 17 merchant seamen and some 40 of the Royal Artillery servicemen on board. 16 of these Royal Artillerymen were buried together in the Broadhill Extension. Another deadly incident occurred on 21 April 1943, when the Gordon Barracks in Bridge of Don, Aberdeen, was hit during an air raid, killing 27 new recruits of General Service Corps and wounding a further 26. Six of those killed were buried together in the Broadhill Extension. 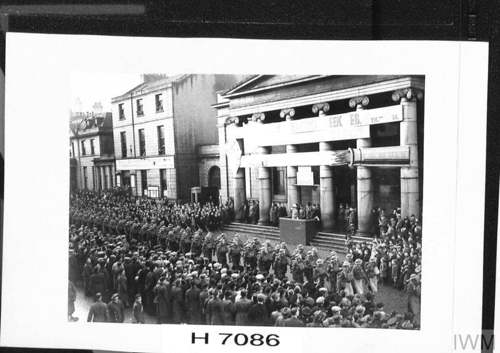 Aberdeen (Trinity) Cemetery contains 170 service burials from the First World War, including one unidentified sailor of the Royal Navy. However, with one or two exceptions, their graves are not marked by Commission headstones. The reason for this seeming omission is contained in the files of the CWGC archive. 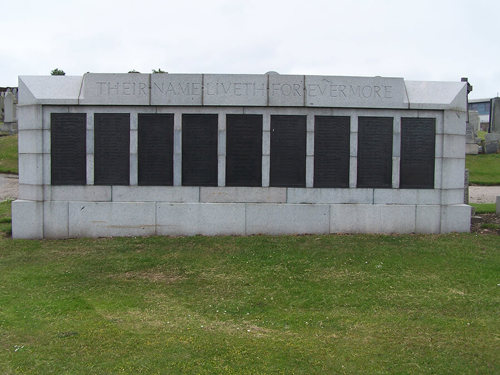 Many of the military burials in the cemetery dating to the First World War were made in common graves, and under the regulations which applied in the cemetery these graves could not be marked by individual headstones. In other cases, burials had been made in graves where the cemetery authority was already owed dressing fees, but the Commission was unable to use its funds to pay these fees, which had been accrued over a period of years.

In the end, the Commission decided that rather than erecting headstones on some of the graves, while leaving others unmarked, it would commemorate all those buried in the cemetery on a screen wall memorial, which was duly constructed. 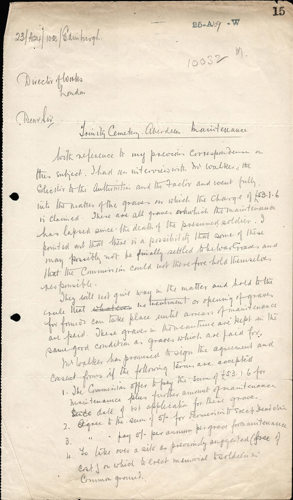 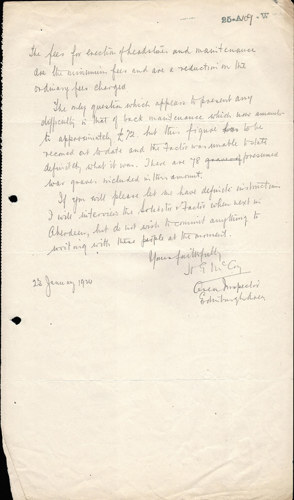 However, not quite all of the First World War casualties were added to the screen wall memorial. A group of 16 naval casualties buried in the cemetery are actually commemorated on a private memorial which was later adopted by the CWGC. 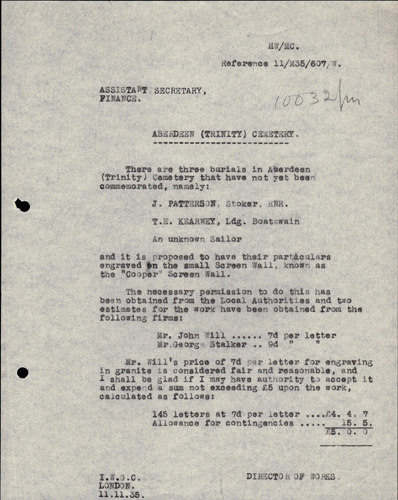 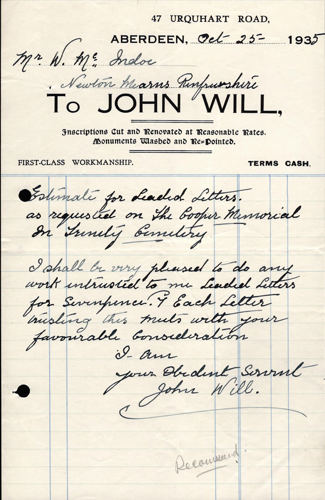 The Cooper Memorial marks a naval plot in which a number of naval casualties were buried during the war. Both the plot and memorial were a gift from a Mr George Cooper, who wanted to provide an area of the cemetery for the use of the naval authorities. The first casualty buried in the plot was Stoker 1st Class Thomas William Nickless of HMS Acasta, who was killed in the Battle of Jutland. He had originally been buried elsewhere in the cemetery, in common ground, and it was this that led Mr Cooper to present the plot to the naval authorities. 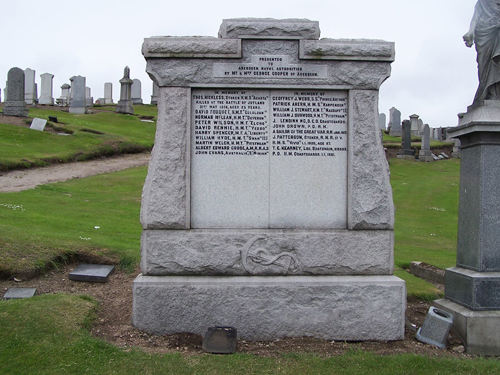 As the memorial adequately commemorated the individuals, the Commission simply adopted it as their place of commemoration, even arranging to have additional names added to it. 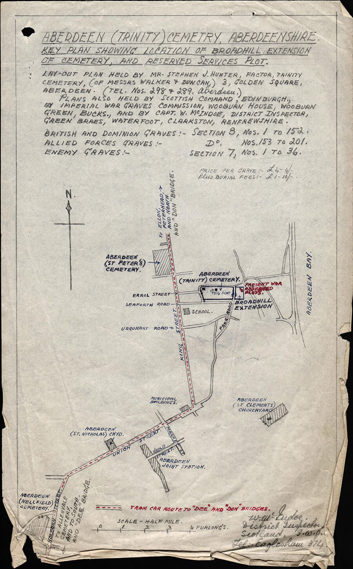 With the outbreak of the Second World War in 1939, additional burial plots were reserved for the likely military casualties that would arise. In June 1940, plans were put in place for the creation of a new service plot in the cemetery, which would become the Broadhill Extension. It’s location, and that of other cemeteries in Aberdeen, can be seen on this sketch plan from 1946. 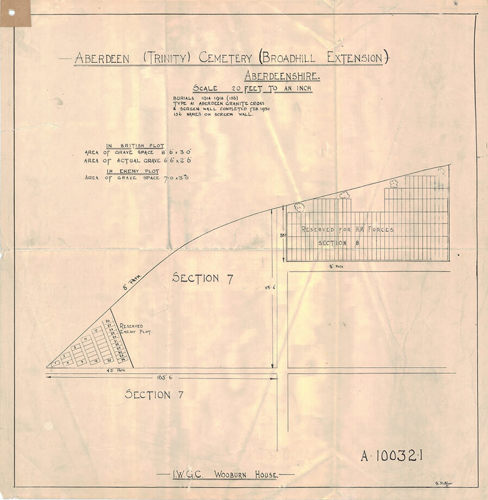 The CWGC initially considered following the course it had adopted after the First World War, by commemorating the war dead on a screen wall, either a newly constructed one, or by adding and extending the existing First World War memorial. However, following discussions with the cemetery authorities, and seeing that there was no obstacle preventing the marking of the graves of Second World War casualties, the Commission adopted its usual practice of erecting individual headstones on the graves. 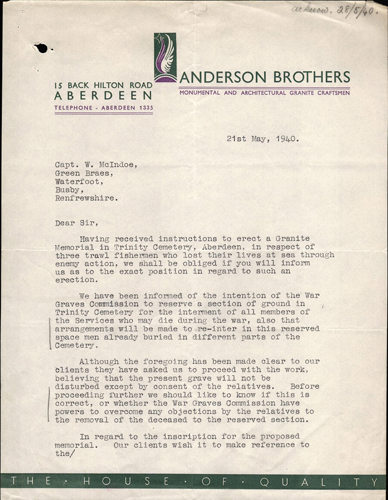 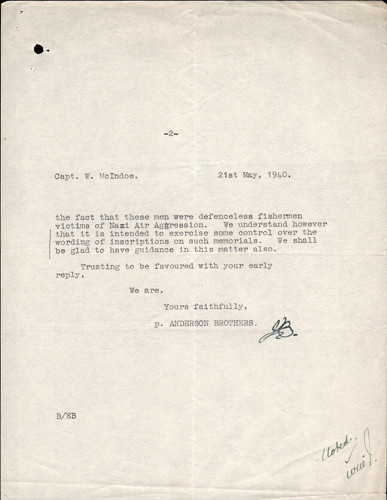 Although the Commission had settled on erecting individual headstones in the Broadhill Extension, private memorials could still be erected on war graves by individual grave owners if they so wished. A number of Second World war graves in the cemetery are therefore marked with private memorials, usually erected by the casualty’s family. One interesting private memorial in the cemetery, which was erected to three members of the Merchant Navy, was not erected by the men’s families however, but by their employers. 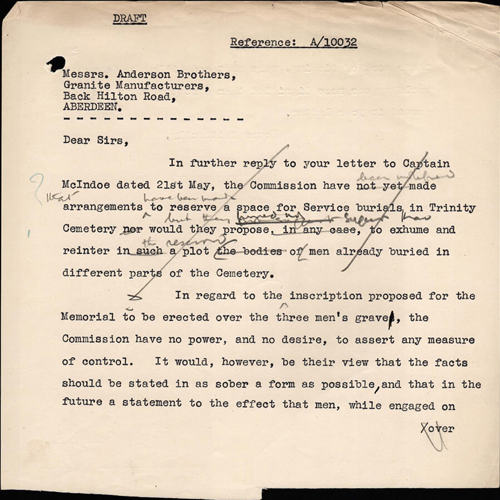 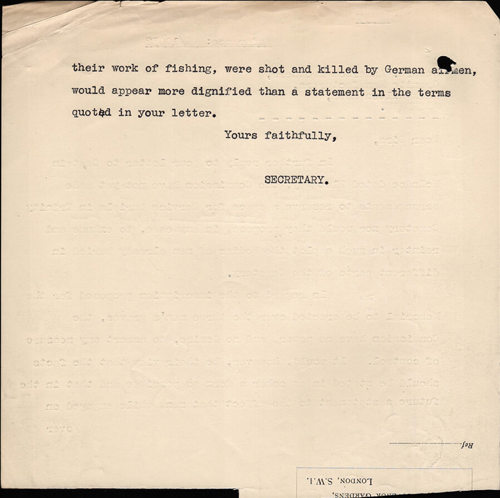 Deckhands George Butt and James Whitcombe, and Trimmer William Rowle, all of the Steam Trawler “Etruria”, died when their fishing trawler was attacked by a German plane in December 1939. The owners of the grave, the Grimsby and East Coast Fishing Company, commissioned their own memorial, which was built by the Anderson Brothers firm of monumental masons.

In this letter to the CWGC, the monumental masons ask for guidance as to the wording of the proposed inscription for the memorial, and while the Commission reply that they have “no power, and no desire, to assert any measure of control” on what would be a private memorial, they do suggest that any inscription should state the facts in a sober and dignified manner.

In May 1941 a large number of burials took place in the Broadhill Extension as a result of one incident. The ship HMT Archangel, which was being used as a troop transport, was bombed by Luftwaffe aircraft while in the North Sea, approximately 10 miles north east of Aberdeen, on 16 May. 52 of the 475 people on board died in the attack. 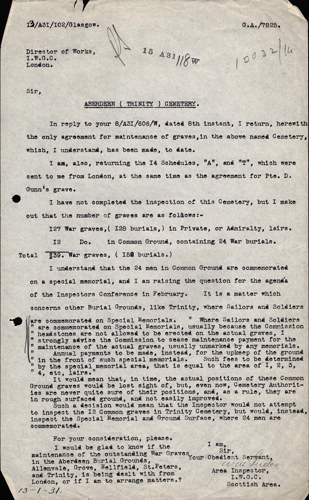 A large number of the dead were brought to Aberdeen (Trinity) Cemetery. Such an influx of bodies at one time created difficulties for the cemetery authorities, and the Commission’s Regional Inspector Captain William McIndoe, having been informed of the incident, arrived at the cemetery on 21 May to report on what occurred.

He noted that bodies had begun to arrive at the cemetery on 17 May, and that the first burials took place five days later. In between these dates, the authorities had dug the graves, but many more were dug than ended up being needed “as relatives were constantly arriving, or wiring, that they wished private arrangements to be made". McIndoe went on to record the sad tale of the parents of one casualty who, having been left with no money after paying their own fare up to Aberdeen from England, had to be fed by the cemetery superintendent, put up for the night by the local police, only to find that their son's coffin was already "on its way to the town from which they had come". In the end, only 17 of 41 bodies which arrived at the cemetery were buried there, with the rest being sent on for burial in their local cemeteries and churchyard throughout the rest of the UK. 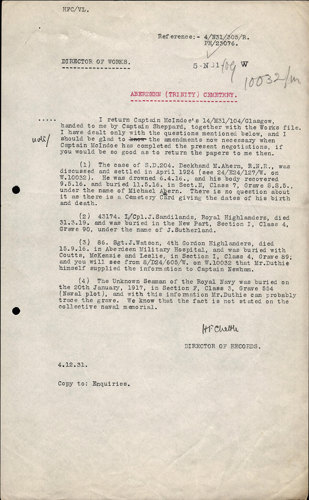 As a result of this experience, McIndoe made several recommendations, including in particular the development of an improved system for notifying the next-of-kin, in order to prevent their unnecessary travel and the digging of unnecessary graves. 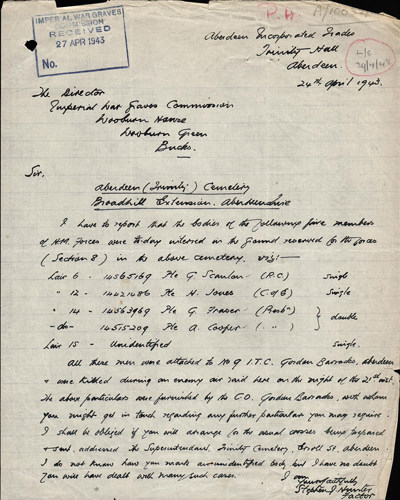 The Archangel incident was not the last mass burial to take place in the cemetery. On the night of 21 April 1943, Aberdeen suffered its worst air raid of the war. A total of 125 people were killed, including 27 servicemen who died when their barracks were hit. The families of 21 of the servicemen claimed their bodies and had them buried in their local cemeteries, but 6 were interred in the Broadhill Extension.

Before visiting we recommend you consult the website of the cemetery authority.

Are you ready to become a CWGF Member?

Sign up as a member to help the work of the Commonwealth War Graves Foundation.