Laid out in 1896, the cemetery contains over 200 burials of the First World War, most of them forming a war graves plot in Section D. An unusual feature of Comely Bank cemetery is that the granite headstones in the war graves plot lie flat, a decision made by Imperial War Graves Commission architect and native of Edinburgh, Sir Robert Lorimer. The Second World War plot is immediately in front and contains more than half of the 76 Second World War burials. The war cemetery also contains the war grave of a member of the Finnish Legion and two non-war service burials.

Find the casualties from this site

During the First World War, a plot was acquired Comely Bank cemetery for burials from three military hospitals, one of which - the 2nd Scottish General Hospital - is situated next to the cemetery itself and is known today as Western General Hospital. The 2nd Scottish General Hospital occupied Craigleith Poorhouse and had beds for over 1,000 officers and men. The Edinburgh War Hospital was established in 1915 when the War Office took over Bangour Village Hospital, and by 1918 had reached a record capacity of 3,000 patients crowded into wards, huts and specially erected marquees. The Leith War Hospital had 585 beds in the infirmary at Leith and the port was used by hospital ships throughout the war. Military hospitals were staffed and operated by the Royal Army Medical Corps and Queen Alexandra's Imperial Military Nursing Service, supplemented by volunteer workers from Voluntary Aid Detachments, the Red Cross, St John's Ambulance and the YMCA.

From 1914 Edinburgh was also the headquarters to the 4th, 5th, 6th and 9th Battalions of the Royal Scots, with the 7th Battalion stationed at Leith. 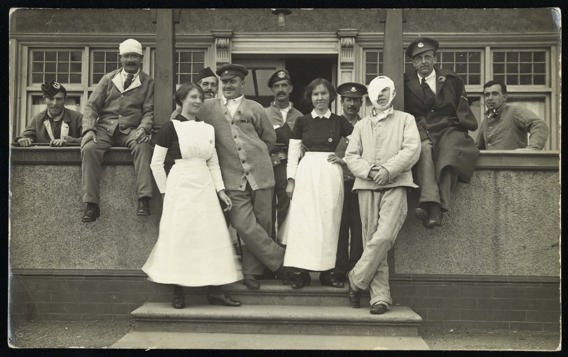 The 227 First World War graves include two female auxiliaries who died in 1918. At least 50 of the servicemen buried in the cemetery died as a result of the global influenza pandemic -- the “Spanish flu”  -- that killed up to 6 per cent of the world’s population between 1918 and 1920. The disease ultimately claimed the lives of as many as 50 million worldwide.

Among the First World War burials is Private William Keddie Gourlay of 3rd Battalion, Seaforth Highlanders who died at the City Hospital, Colinton on 27 March 1918, aged 22. In 2017, Gourlay’s grave was marked with a Commission headstone following the successful identification of his grave as a war grave through research submitted by the In From The Cold Project.

In addition to the burials dating from the First World War, the cemetery is also the final resting place of 76 soldiers, sailors and airmen who died as a result of service during the Second World War. Among the Second World War graves is that of Reginald Earnshaw, a member of the Merchant Navy who died on 6 July 1941, aged only 14 years old. The personal inscription on Reginald’s headstone, as chosen by his mother Dorothy, reads: ‘REMEMBERED WITH PRIDE GREATER LOVE HATH NO MAN THAN THIS, THAT HE WOULD LAY DOWN HIS LIFE’. 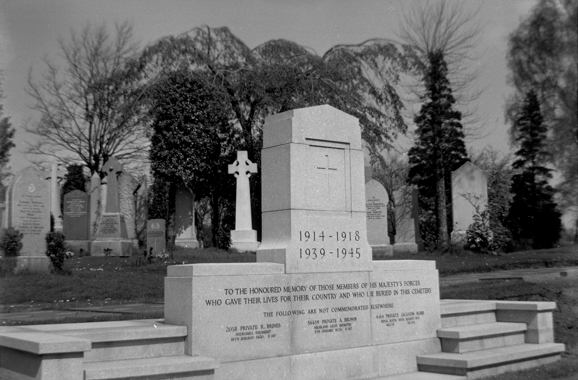 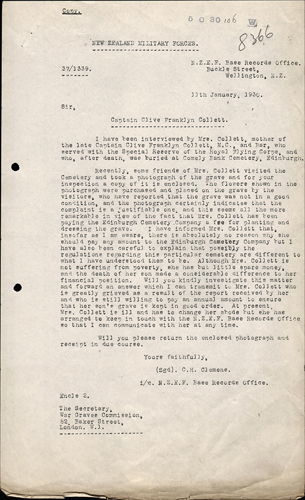 Letter from the C. H. Clemens of the N.Z.E.F. Base Records Office to the IWGC detailing the complaint received from Mrs Collett regarding the grave of her son, Captain Clive Franklyn Collett, Royal Flying Corps, 11th January 1930 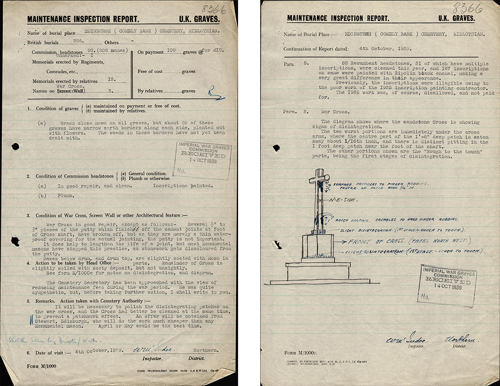 Maintenance report on Edinburgh (Comely Bank) Cemetery completed by William McIndoe (IWGC Area Inspector, Northern District) including sketch drawing of the Cross of Sacrifice showing areas of disintegration of the stonework, 4th October 1939. The Cross of Sacrifice, which was made out of Swinton sandstone, was dismantled in 1956 and replaced with a granite screen wall 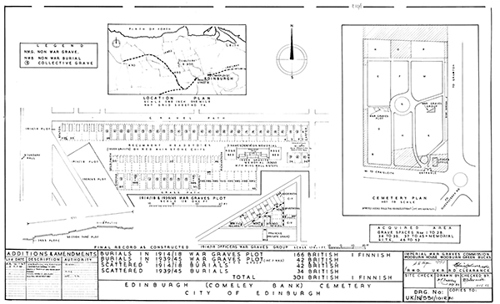 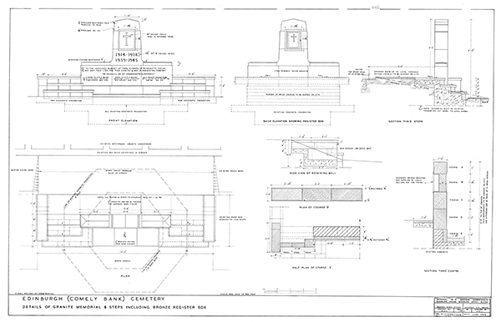 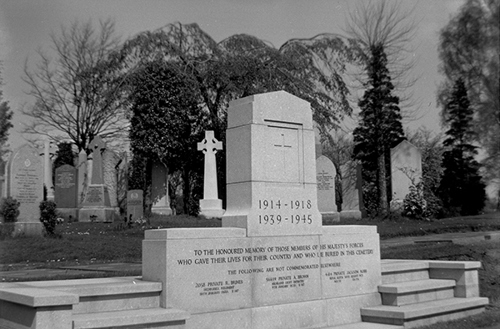 Granite screen wall memorial erected at the cemetery in March 1956. Sir Edward Maufe, the Artistic Adviser to the Commission, had visited the cemetery in 1947 and provided suggestions as to its treatment, although the final design work was undertaken by Commission architect Ralph Hobday. The memorial replaced a Cross of Sacrifice which had stood in the cemetery. 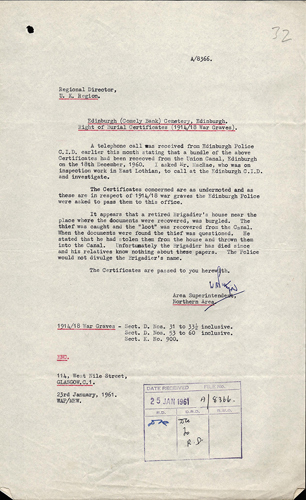 Letter from William Pettigrew, CWGC Area Inspector to CWGC UK Regional Director providing an account of the recovery of burial certificates relating to First World War casualties buried at the cemetery following a burglary, 23rd January 1961. The certificates had been stolen from a retired brigadier’s home in Edinburgh and had been recovered by the police from a canal and handed over to the Commission.

This VR Experience was created in partnership with Edinburgh Council's Bereavement and Cemeteries team.

Before you visit we recommend you consult: